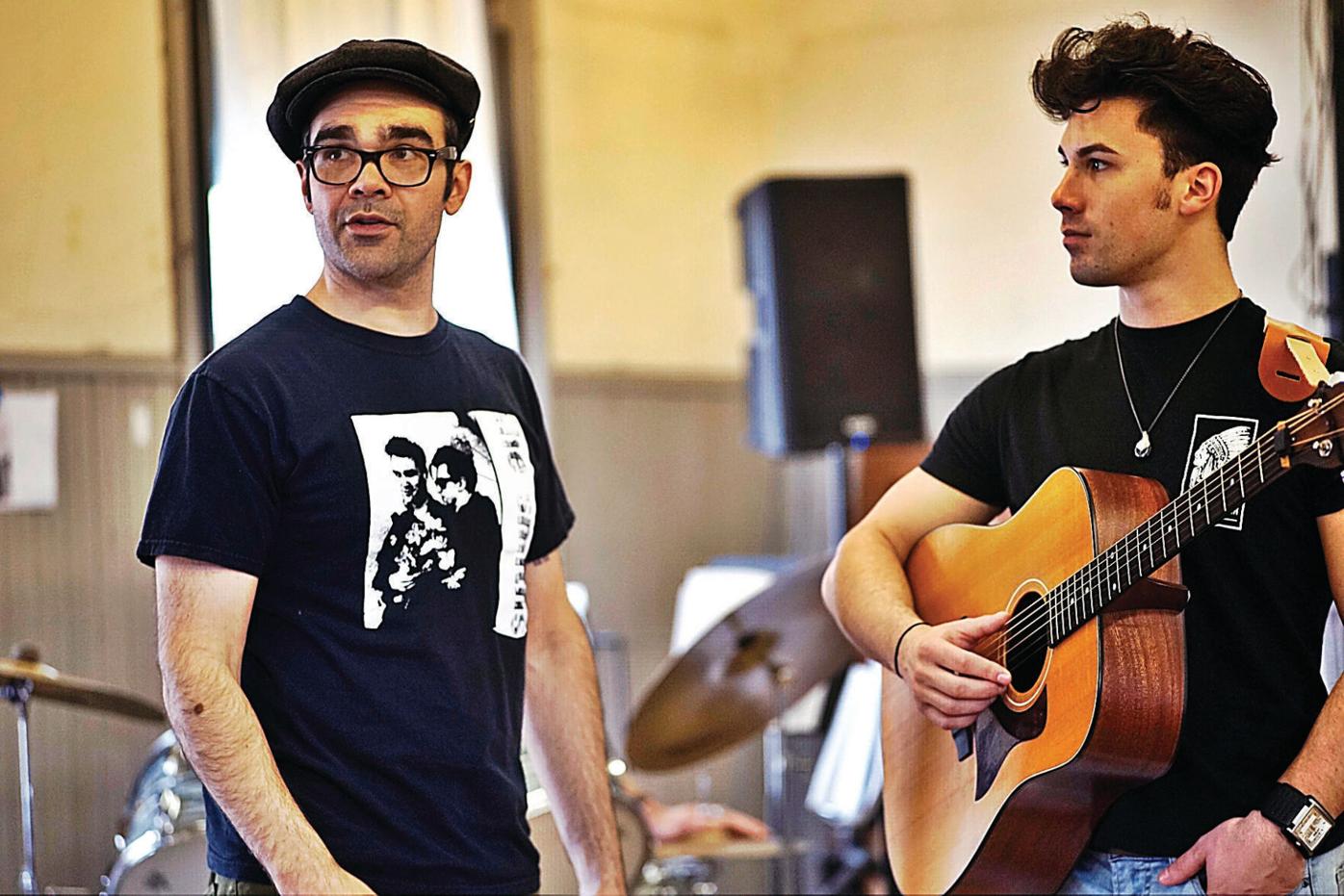 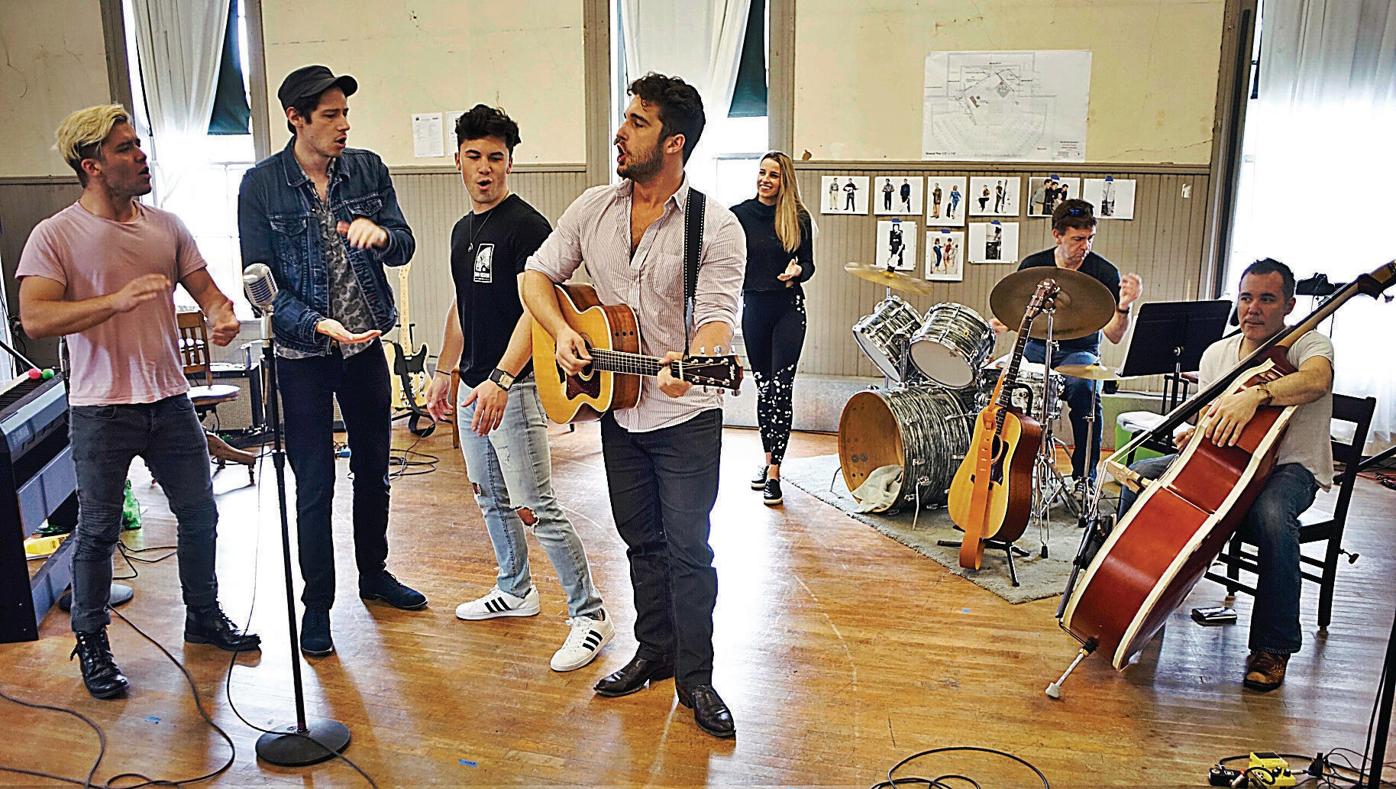 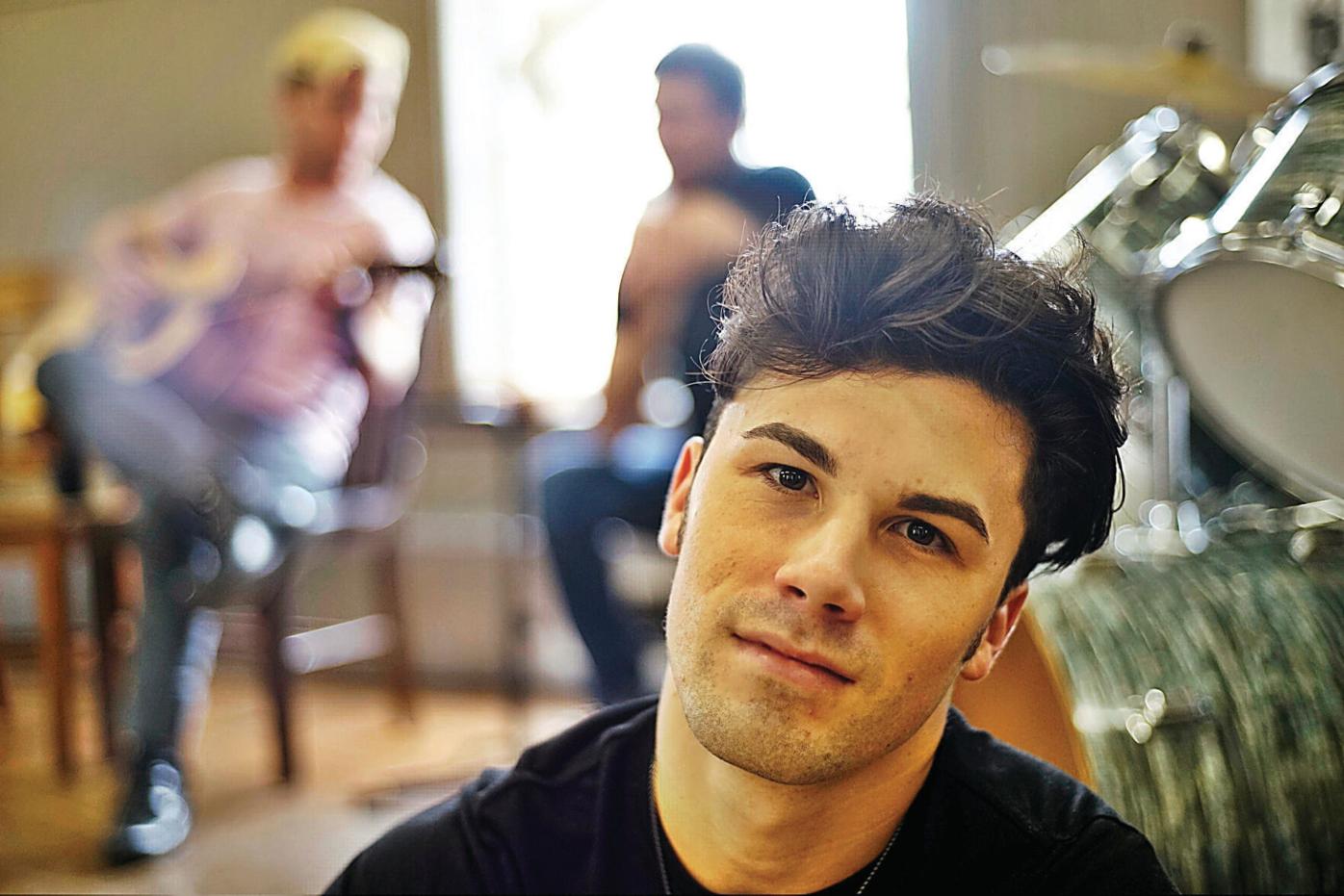 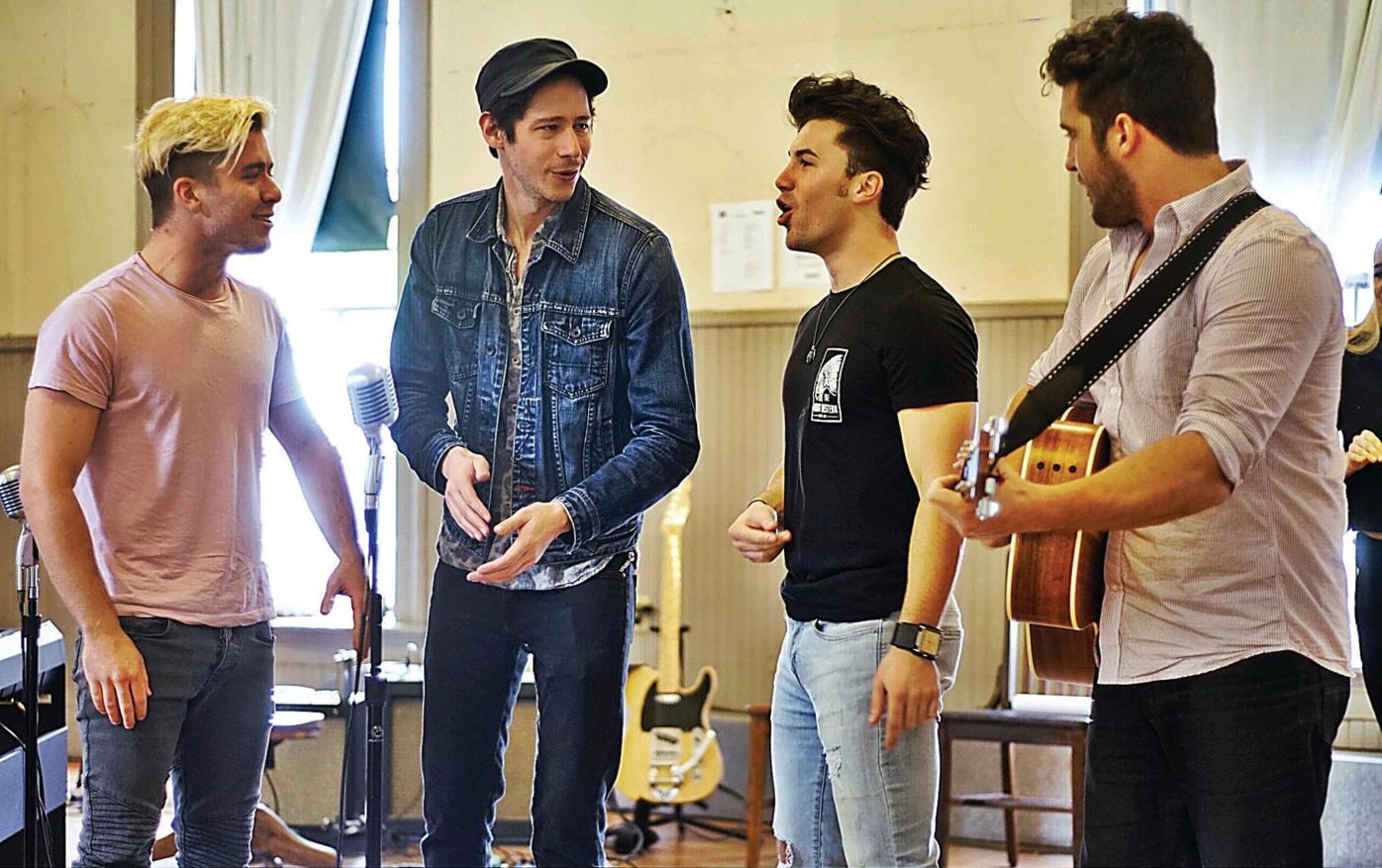 Pry open a time capsule and you expect to find a little dust. But maybe not when there's been a whole lotta shakin' goin' on.

As he prepared to debut "Million Dollar Quartet" this week at The Unicorn Theatre in Stockbridge, director James Barry has been a man in motion, channeling the fabled musicians who, one day six decades ago, found themselves together in the Memphis, Tenn., studio run by producer Sam Phillips.

Enter Johnny Cash, the "man in black." And Elvis Presley, who had sung his way onto the charts that year with "Heartbreak Hotel" and recorded his first gold album. Carl Perkins was a ringer, already a success; the upstart was Jerry Lee Lewis, a session player and keyboards demon.

They were to become household names. But on Dec. 4, 1956, Lewis was still a hopeful, arriving at Sun Studio to record with Perkins. Presley dropped in with a girlfriend, and Cash came to talk business with Phillips. All their careers were still taking shape.

Out of this chance encounter came an epic jam that Colin Escott and Floyd Mutrux captured in "Quartet."

The other day, Barry, a Williamstown actor who made his professional debut 18 years ago at the Unicorn, wove his way through his players in a West Stockbridge rehearsal hall, jumping into action to try out steps during a song and to check sight lines from corners of the stage.

It's been loads of work, maybe "Sixteen Tons" worth.

Even with all the heavy lifting that precedes a theatrical opening, there was room for lightness. After Barry praised one song rendition, Bill Sheets, playing Cash, bellowed in his rich bass voice, "We are the million-dollar quartet."

"And when you count for inflation," Barry quipped, "that's really a lot of money."

While songs power the success of this musical, this is more than a staged concert. As audiences will find when previews start Wednesday, "Quartet" has a story to tell, and, for Barry and his cast, pitfalls to avoid.

A key one is to reach for three dimensions and to reveal character, even while nailing renditions of these famous songs, using drama to draw audiences in past familiar lyrics.

"Not a lot of people are expecting some interesting drama," Barry said of the show. "If you attempt these roles with impersonation in mind, it often borders on caricature to me."

Though this is his directorial debut, Barry knows "Quartet" inside out, having performed the role of Carl Perkins in the second and third years of the Broadway tour, then reprising it in theaters around the country. Even before this new run gets underway, Barry will head back out on the road to join a cast of "Quartet" in Kansas City.

"I think the show has spread the gospel of Carl Perkins," Barry said.

Though it bills these musicians as a quartet, the play gives each a chance to connect individually with the audience, as the Phillips character, played by Ben Nordstrom, provides narration that helps set the context.

At a remove of 60 years, most theater-goers won't know exactly where these musicians stood in their careers, despite the ubiquity of Elvis in the culture and popular biopics like "Walk the Line," which captured Cash's career.

Though Presley's "Love Me" was a Top 10 song in 1956, that list of chart-toppers included Doris Day, Frank Sinatra and Eddie Fisher - hardly the harbingers of emerging rock 'n roll. The exception that year was Fats Domino, whose "Blueberry Hill"showed the growing appeal of rhythm and blues to mainstream audiences.

When this fab four showed up in Memphis, it was the day after Wilt Chamberlain played his first college basketball game (running up 52 points). Fidel Castro and his band of rebels had just come ashore in a remote area of Cuba with their sights on revolution.

Though Elvis joined an impressive roster that day for this impromptu collaboration, the fuse on his career had been lit. That June, Presley, at age 21, had caused a sensation by gyrating his hips during an appearance on "The Milton Berle Show." It was hardly the first time a roadhouse performer got to grinding to music that had long sounded through African-American nightclubs. But Presley put it in living rooms of white America, igniting both his career and an emerging musical genre.

"His star is rising faster and higher than anybody," Barry said of the Presley of late 1956.

In casting "Quartet," Barry found a young man who, though only 23, has been portraying Elvis for 13 years.

Brycen Katolinsky started bringing his version of Elvis to audiences at the tender age of 10, inspired by music he grew up with in Canada in a home devoted to Presley, country and rockabilly. "That's just the music that drives me personally," he said in a recent interview with The Eagle.

Katolinsky started performing as a child at Elvis festivals, which are held all around the world. He's won his share of them and has performed for audiences as large as 20,000 people — where, he's learned, it's playing to the first rows that really counts.

"Once the first three rows get into it, the crowd gets into it. They go nuts with 'Hound Dog.' That's one of the biggest," he said.

But sometimes, Elvis fans don't need to hear a note. When he performs as the "comeback" Elvis, the one that followed the six years the singer spent making movies, Katolinsky comes out in leather. "The girls just lose it. You don't even have to sing."

To get to the top of the heap as an Elvis impersonator, Katolinsky put in his time. "You have to study a lot, and watch a lot of video," he said. Katolinsky examined old pictures of Presley in performance, looking for evidence of the way he carried himself and scrutinizing his mannerisms, right down to the set of his eyes and eyebrows.

But mimicry is not what's afoot in "Quartet," or even at the heart of what Katolinsky believes makes for a credible performance as Elvis in any setting. He says that while audiences want to hear him capture as much of Presley's vocal quality as possible, the creative spark must be his own, if he is to bring this great, and tragic, figure to life.

"You're not trying to be Elvis. I perform as myself more than that," he said.

Elvis felt the music profoundly, Katolinsky believes, and that drove the way he moved his body. In performance, Katolinsky has to allow himself to feel that rhythm just as deeply.

Katolinsky specializes in the "young" and "comeback" Elvis of 1968. He has stayed away, so far, from "concert" Elvis in his final years. Presley died in 1977 in his Graceland mansion in Memphis at the age of 42.

Though Barry has spent years reliving these Memphis moments of Dec. 4, 1956, on American stages, he's looking at them anew from the director's chair.

"I think we can really do an intimate version," he said of the Berkshire Theatre Group production, which officially opens June 17 and runs through July 15.

The designer is recreating the look of an unadorned recording studio inside the Unicorn. The theater space will bring audiences up close, not only to the quartet members — the lips, those hips — but to two sidemen, a drummer and a standup bassist.

"I think this is going to be a really fresh take on the aesthetics of the show," Barry said.

After recruiting Katolinsky as his Elvis, and knowing how hard this show is to cast, Barry hit gold. Katolinsky was performing in a version of "Quartet" aboard the Norwegian Cruise Line.

That prompted a question from Barry:"How are the other guys you're working with?"

Katolinsky had only good things to say. Not only must these actors be able to sing and play instruments, they have to have a deep feel for the music. Portraying someone like Presley or Cash on stage simply demands more.

"It's tough to get this gig if you don't come to this as a fan," Barry said.

As the cruise line plied the Caribbean, before crossing the Atlantic to Portugal, Barry examined work on video by Katolinsky's fellow cast members.

After seven months of working together, they'd developed strong bonds.

Barry signed them all up. And the week before last, as the cast arrived in the Berkshires for rehearsals, and to share a house during a month of performances, Barry's ship came in.

Along with Katolinsky and Sheets, the cast includes Colin Summers as Carl Perkins and Gabriel Aronson as Jerry Lee Lewis. Other players are Nordstrom as Phillips and Christy Coco as Elvis' girlfriend, a singer named Dyanne in this show. (The real girlfriend was a dancer.)

"They're young and great players. They've got a chemistry together. They all play, sing and move and look amazing," Barry said.

But as became clear at a recent rehearsal, those elements are just the beginning.

While members of this "Quartet" had their songs down cold, Barry, their own Sam Phillips, was the new creative force on the scene — fresh to directing, but with deep theater chops and years and years of hearing the music that flowed on one day in Memphis in late 1956.

As Barry puts it, "I know these songs really well by now."