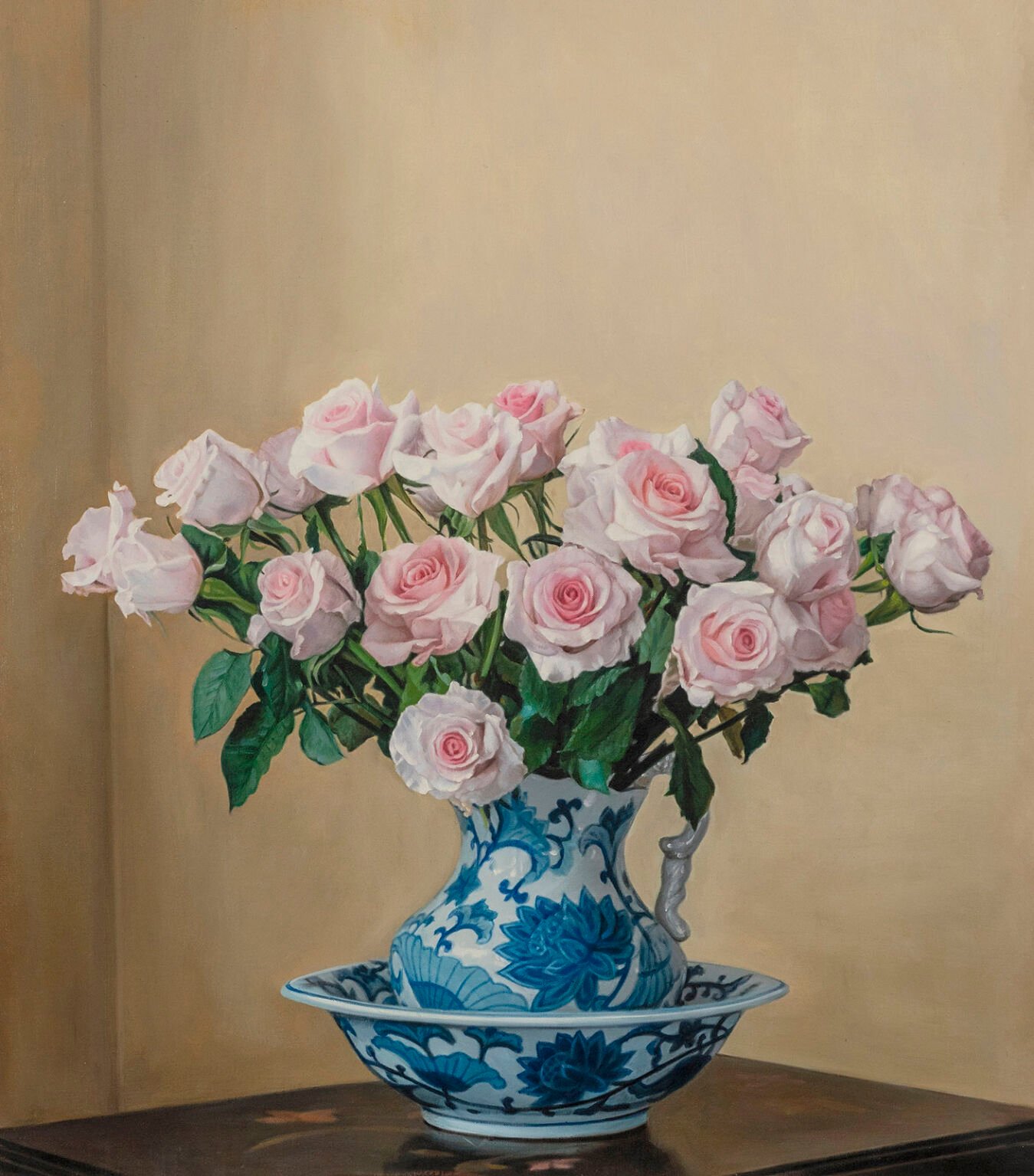 "Dreamcatcher," 2021, oil on linen, is part of Marc Dennis' show "Revolution," on view at the Berkshire Botanical Garden through Sept. 6. 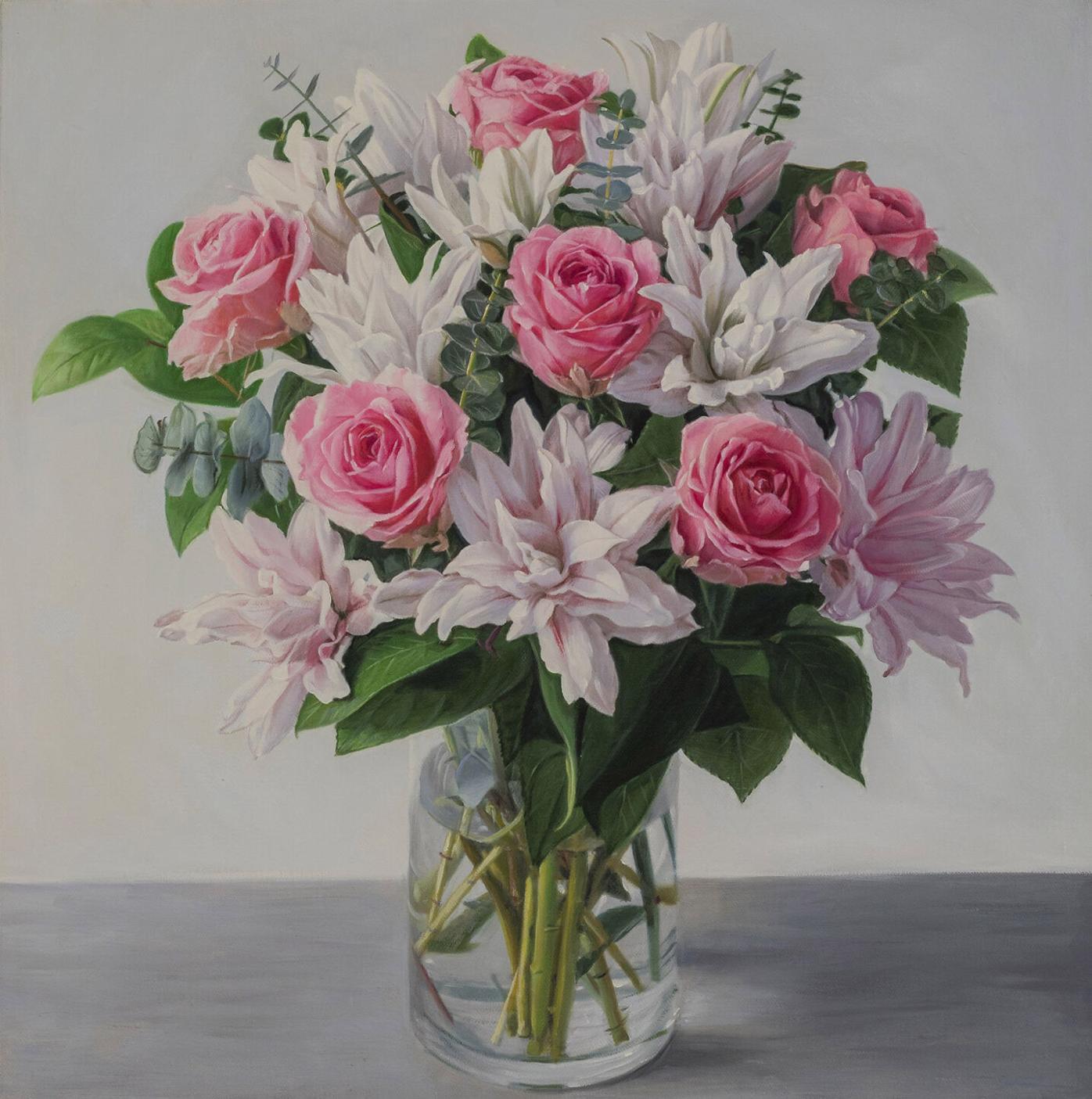 STOCKBRIDGE — On the walls of the Berkshire Botanical Garden’s Leonhardt Galleries, bouquets of pink and white peonies and roses fill glass and porcelain vases. Some are in full bloom; others are fading fast.

The work is part of Dennis' hyperrealistic handiwork, "Revolution," an exhibit of 13 mostly new oil-on-linen paintings, plus one watercolor.

“My artistic intention for this body of work is to communicate beauty as a series of experiences,” Dennis writes in his artist’s statement, “each painting providing a place for contemplation, journey and exploration.”

Originally planned for 2020, the show was rescheduled to 2021. During lockdown, however, many works slated for inclusion were sold, among them the title painting, “Revolution.” Part of a 2017 series named at a time of discontent and social discord, it portrayed large, congested gatherings of flowers and bugs.

“At the same time, every painting had an element of beauty and a sense of quietness, which I strive for in my work,” said Dennis, during a recent phone interview.

Long wanting to see if he “could generate as much exuberance in a smaller work as a larger [one],” Dennis down-sized his creative output.

“I did over a dozen [for the show], all under 36 inches,” he said. “I had to make them as profound and provocative, happy and exuberant, and mysterious as I knew them to be.”

Unlike his usual jam-packed paintings, the flower vases “are about each of us being isolated in our own space.”

Dennis wanted to get impact on an extremely intimate level, “because we’ve all been so out of touch,” he said. “I wanted the flowers to appear as portraits you could stand in front of by yourself.”

Flowers are so moody, he said. “Each person views drooping and dropping petals differently. They could see sadness, or tiredness, or drunkenness.”

His fading blooms are “memento mori” — remembering “we, too, shall die.”

In “Allegory of Mythology,” a white dog floats in front of an exuberant flower arrangement inspired by 17th- to 18th-century Dutch painter Rachel Ruysch. It reflects Dennis’ recurring theme of adding a contemporary twist to classical artworks.

“Shunka Wakan” shows a pony lying in a field of wildflowers. Dennis rode that pony while living on a Lakota reservation in South Dakota — “One of the most beautiful experiences in my life,” he said.

Keeping “Revolution” as the show’s title “made perfect sense, the way things continued to fold out with our country and pandemic,” he said.

Headlining the show is a large painting equally in tune with this summer’s overarching Art/Garden theme, “Taking Flight.”

An ornithologist at heart, Dennis has painted birds all his life, more usually little works for himself.

In 2019, he watched a press conference of foreign and American journalists in the White House Rose Garden on CNN.

“Everyone was cackling and squawking at the same time, trying to get last-minute questions in,” he said. “I’m thinking, these poor souls [are] condemned to hell here. And the one who gets a question answered, they’ll get a raise.”

That is heaven and hell, he thought.

He painted birds from regions he had traveled to across the world.

Norman Rockwell’s “Freedom of Worship” was a major influence.

During lockdown, he held on tight to the painting for the Berkshire Botanical show. It’s even more timely now, he said, noting doctors wore bird masks for protection during the bubonic plague.

From birds to flowers, this past year has seen his work take flight in new directions.

“I am complex,” he said, “[so] maybe the diversity of the show is a really good self-portrait.”

Berkshire Botanical Executive Director Michael Beck was introduced to Dennis’ work by board member Joanne Cassullo. “We knew of his reputation for being technically amazing,” Beck said. “But he often had as his theme aspects of the natural world, [which] was important to us.”

The aim of the galleries, Beck said, is to open up the garden to a different, wider audience.

“We’ve seen that be quite successful; people come here and then fall in love with what we are doing in a broader sense,” he said.

Solo and group shows by national and regional artists have included painting, sculpture, photography — even jewelry.

Until recently, Beck didn’t know what Dennis would exhibit.

“That’s the fun part, especially with an artist who really wants to engage with us and create a lot of new works," Beck said.

At Berkshire Botanical Garden, Gregory Crewdson's 'Fireflies' tells one of his most intimate tales

Opening Saturday, June 12, in the Leonhardt Galleries of Berkshire Botanical Gardens and running through July 18, “Fireflies” consists of a series of photos Gregory Crewdson took of fireflies in Becket in 1996.

Michael Beck, Berkshire Botanical Garden's Executive Director who served at the helm for almost eight years, is taking a sabbatical to spend two years in England.

After a summer of art openings, picnics on the Tanglewood lawn, nights at the theater and dining al fresco, a stroll through one of the many outdoor sculpture shows on view in the Berkshires may be the right activity to help you unwind and ease into fall. But don't wait too long to see them, as many of them will be gone by mid-October.