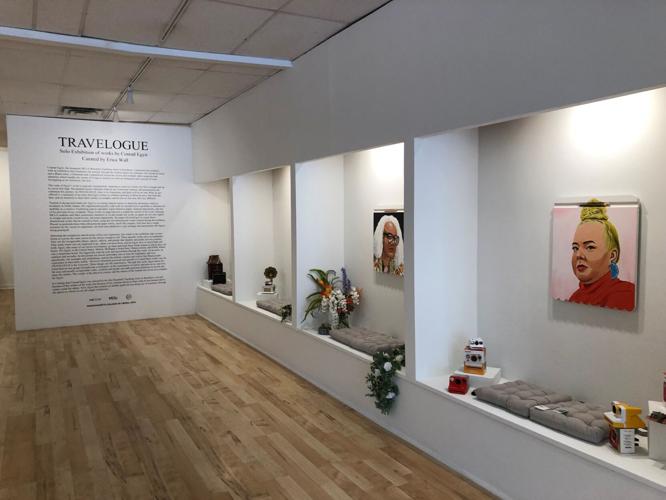 Images of Erica Hall, executive director of MCLA Art and Culture, and Genevieve Gaignard, right, photographer and collage artist, can be seen in artist Conrad Egyir's "Travelogue" at MCLA Gallery 51. 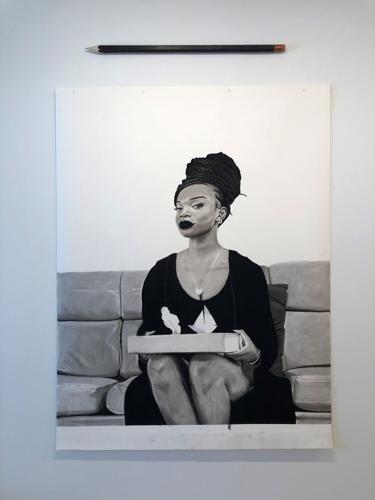 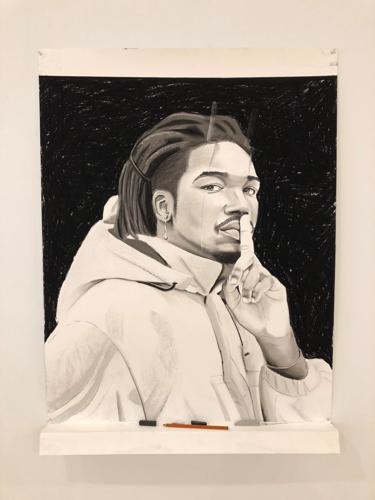 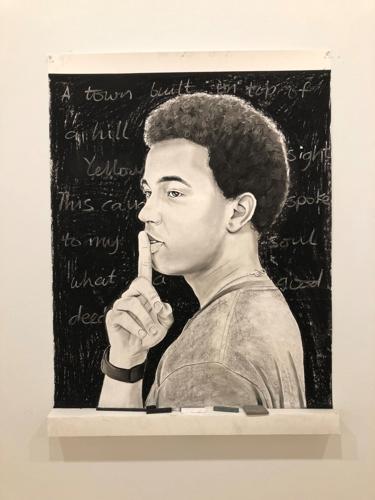 A portrait, "Winstons Hill," is part of "Conrad Egyir: Travelogue."

NORTH ADAMS — A portrait by Conrad Egyir does not sit still. It is not about likeness, or a static depiction of a person in time and space. It a multiverse, on canvases dense with symbols, exploring the relationship between artists and subject and viewer, traveling through cascades of context. Sometimes they even burst into new spaces with additional dimensions.

That’s what it means to be a young artist who lives in several spaces at once. Born in Ghana, now living and working in Detroit, Egyir currently spent the past year as a temporary resident of North Adams. As described in a few words of text on one of his works, it is how it feels to be between mountain peaks and the clouds, between the pickaxe and the pillow.

On view: Through Sept. 9

“I know I’m African, I know I’m Black, I’m an artist, I’m an American by naturalization — I’m all of these things,” Egyir said in an interview before his current show, “Travelogue,” which opened June 10 at MCLA Gallery 51. “The challenge over the years has been to define what home is. I feel like I have feet in different worlds all the time.”

One of those worlds was the campus of the Massachusetts College of Liberal Arts, where for the past academic year he was involved with the inaugural Benedetti Teaching Artist Residency, a new program that brings artists to North Adams to teach and make new work.

In the short time he’s been a working artist, Egyir has earned a reputation for his large-scale portraits. Two variations on his theme are included here, large charcoal images that are mostly in black-and-white but with striking, key bits of color. They are of MCLA students he met through his studio assistant, and are depicted full-length, seated on a couch with great poise, with images of birds and boats resting on their hands.

When considering models, Egyir typically chooses people he knows or has a personal connection to, so it is never “just a face in a frame or on a canvas.” His process involves taking lots of photos as his subjects pose, as he poses them around some kind of narrative or concept he wants to capture. Often they respond on their own, sometimes he has to stage manage it. In the end he creates something new in the final work, beyond the ideas and the interaction along the way.

The roots of his practice are in the traditions he grew up in in Ghana, specifically his effort to find “how to use element of visual language from Ghana to create something everyone can understand.” Early on, that meant using Adinkra symbols, which are symbols and design elements that communicate complex concepts and values from one generation to the next.

He also owed a lot to the oral storytelling tradition, and the way older people would entertain or teach through stories that were timeless and shared. “Some of the stories I heard as a little kid, it would take months or years to understand what the elders were saying,” he said. “Even though they were fun and easy to digest, they were multilayered and for a long time you could pull narratives and ideas out of them.”

Applying that concept to painting has been the inspiration for much of his work. In his use of bright colors and layered themes, Egyir’s work has been compared to Kehinde Wiley, who notably painted the official portrait of President Barack Obama in his distinct hyper-detailed and richly textured background. Egyir said he admired not just the use of color and photo-realist precision, but the universe of meanings Wiley can pack into his images.

With his time at MCLA, Egyir thought about working on a smaller scale to sharpen and focus his ideas, and about finding other elements that can be brought to tell his stories. A series of portraits are lined up filling a series of cubicles that are built into the room. Each includes a small portrait, often on a canvas with a perforated edge like an old-fashioned postage stamp — a common motif Egyir has used through the years to call to mind postcards and travel. Each has its own cabinet-like space — which is part of the shelving at the gallery — with some objects included making it feel like an altar and introducing a new dimension to the work. “I thought it was a great way to dip my feet in installation,” he said. “And the space warranted it.”

Each of the images captures a particular relationship he’s cultivated in the past year. Two are of fellow residents. Joshua Ross, whose show “Come Inside” was at the gallery in the spring. His image with a record player and amid plates and glasses, Egyir said “he and I shared a similar sense of belonging and home.” The next cabinet over is Nathaniel Donnett, who also has a residency this year and whose work will be at the gallery in the fall. He is depicted against a bright green natural backdrop, and surrounded by stacks of books that he recommended to Egyir.

Another space is for Genevieve Gaignard, photographer and collage artist, who uses images in different ways in her work, and had a show, “A Long Way Home” in 2020. She is presented with piles of Polaroid cameras and images, and Egyir recalled how she used the gallery space by painting the walls and including installation elements. “She activated the space, and helped me think about how I could do something similar, as opposed to just slapping things on the wall.”

The fourth spot is of Erica Wall, the executive director of MCLA Arts and Culture and Gallery 51, who is presented with vines and flowers around her image, as if to celebrate her role cultivating and tending to this particular garden.

Though still very early in his career, Egyir has earned some serious attention. In 2020, a print of one of his paintings was included in a meticulously composed scene in Beyoncé’s 2020 musical film and visual album, “Black is King.”

Wall said she first learned about him when he was still in his MFA program at Cranbrook Academy of Art in Michigan in 2018. “It’s a great way to introduce his work to our community, specifically to our students,” Wall said.

She also praised his commitment to teaching — Egyir noted that he comes from a family of teachers back in Ghana, and has seen it as part of his work. “This gives him an opportunity to get that teaching experience in the midst of being a working artist,” she said.

Egyir’s multiple identities as a Ghanaian immigrant, Detroiter, and artist creates overlaps that he is always exploring. How there is always that repositioning, a fact of identity that also goes back to his roots in Ghana, where not just place but what tribe your parents belong maps where you are “from.”

“I’m exploring what it means to be sovereign in your own body, your own space, your own career and practice,” he said. “I don’t use any of those as my address.”

And he said he has been happy to add the Berkshires to his list. He described one day having car trouble and having to walk from North Adams to Williamstown, and experiencing what happens when you slow down and see the landscape unfold. All the beauty one notices, and the things which call to mind other places, how it reminded him of the mountains in Ghana, between Lake Volta and the border with Togo. And the value of getting out of the car and walking, which Donnett encouraged him to do.

“I learned here about slowing down and getting to work,” he said.