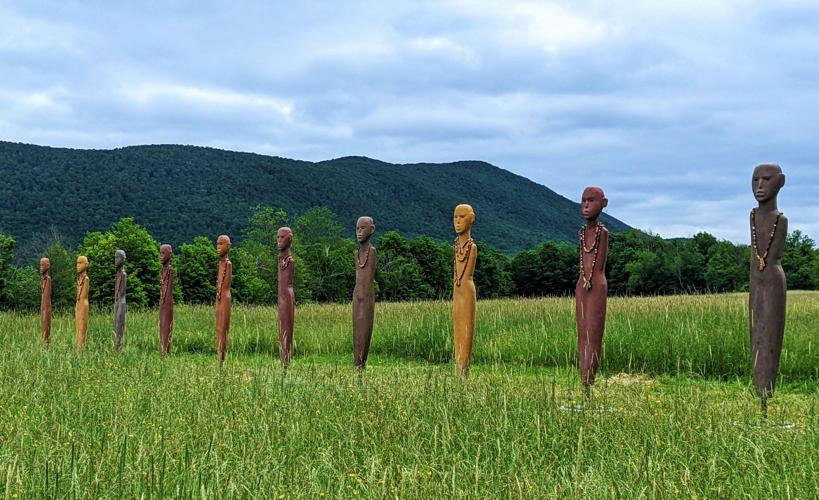 "Counterculture," a public art project of The Trustees of Reservations, is on view at Field Farm in Williamstown through spring 2023. 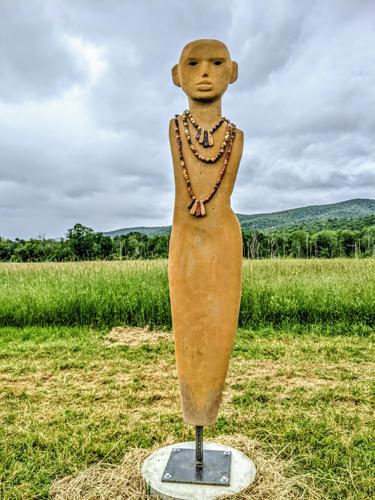 Over the next few months, Rose B. Simpson, will work with members of the Stockbridge-Munsee Band of Mohicans to make beads from clay taken from the meadow at Field Farm. The beads will then be added to the sculptures. 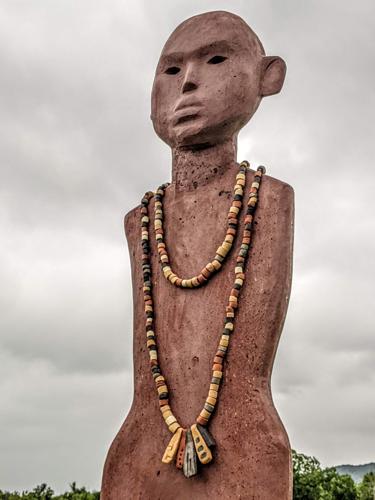 One of a dozen cast-concrete sculptures by Rose B. Simpson, part of "Counterculture," on view at Field Farm in Williamstown.

WILLIAMSTOWN — They stand, 12 silent sentinels, watching over the land.

In this field, they bear witness to the wind as it blows, to the rain as it falls, to the stars in the night sky. They watch the fireflies flit in the dark of night and stand watch over the bobolinks that nest in the tall grasses of Field Farm Reservation, 316 preserved acres overseen by The Trustees of Reservations.

Where: The Guest House at Field Farm, 554 Sloan Road, Williamstown

It is here that sculptor and mixed media artist Rose B. Simpson's slender, androgynous cast-concrete 9-foot-tall sculptures will stand, along the horizon line of the meadow, visible from Sloan Road, though April 30, 2023. Her most ambitious work to date, "Counterculture," honors generations of marginalized people and cultures, whose voices have been too often silenced by colonization and in many cases, forcibly removed from their homelands.

"I've been playing around with this idea being a witness, of witnessing; in that we look deeply at so many subjects, everything that we experience," Simpson said, during a recent interview in the meadow, at the foot of her sculptures. "How do we look deeper and ever deeper into those subjects?

"This piece, initially, was about looking at a sort of the post-apocalyptic landscape for indigenous people. So, they are witnesses of that really difficult history [of colonization] ... these could be put anywhere on this planet and they'd still be, in a sense, surveying that difficult history."

And this piece, she said, is about personal growth, for her, and her audience.

"So much of my work is about teaching myself how to slow down and question every moment, question the things I think I do know, that I'm certain about. I'm questioning, things that I'm told are true, those histories and the perspectives and looking deeper at any situation," Simpson said. "As I work to find that inside myself, I'm hoping the things I make in the investigation into my own personal evolution and growth become opportunities for other people to see that in in themselves."

Each sculpture's eyes are purposely left vacant — holes that show the sky and land behind them.

"The eyes go through, the form, all the way through to the back of the head, to sort of wake them up. They are watching," she said. "We were out there, up on the ladder the other day to put the necklaces on and I could see the wind go through, as dust came out of the eye. It made me realize the wind is actually whistling through the eye, that there's so many layers of what's watching you. We generally forget we're being held accountable or responsible by forces that we forget have any power over us."

Simpson, who traditionally works in clay, first created three figures as clay marquettes. She then made there full-scale models from wood, pine she carved with a chainsaw. The finished pine pieces were then shipped to Sculpture House Casting in New York City, where the 12 sculptures were cast in concrete.

It's the first time, she said, she's had someone else make castings of her work. Seeing the sculptures — as a dozen concrete statues of varying colors and individual personalities — for the first time, slowly rising above the horizon line as she drove up Sloane Road, was a moment for pause, Simpson said.

"When I first saw them, as I drove up the hill — they didn't have the necklaces on yet, but they had already been stood up in the line that they're in — I pulled over. I just had to swallow. It's really, really powerful to see them," she said. "I made these originals and then I trusted them in the hands of someone else. To witness my own work, in this way, is a first-time experience for me. And I'm learning a lot from it. I'm trying to make space for the power I feel from it and the immense strength that I witness, as well this reflection in these pieces. I don't know if I'm worthy, those parts of myself that feel really small and insignificant are having to grow to accept it. It's a big growing moment."

Originally planned for the Holmes Reservation in North Plymouth, another property of The Trustees, "Counterculture," was moved to Field Farm after the Mashpee Wampanoag Tribe, objected to having art from another tribe on their ancestral land. Simpson, 38, an enrolled member of the Santa Clara Pueblo (Khaʼpʼoe Ówîngeh) in New Mexico, and The Trustees deferred to the tribal sovereignty of the Wampanoag, choosing instead to move the work to Williamstown.

In this case, Field Farm is part of the ancestral home of the Stockbridge-Munsee Band of Mohican Indians, the Muh-he-con-ne-ok (People of the waters that are never still), who now reside in Wisconsin after being forcibly relocated numerous times. The Mohican/Munsee lands extended across six states, from southwest Vermont, to portions of Pennsylvanian and New Jersey, including the entire Hudson River Valley and western Massachusetts and northwest Connecticut, up to the Connecticut River Valley.

"This project would not be possible without the Stockbridge-Munsees," said Jamilee Lacy, guest curator of The Trustees of Reservations’ 2022 Art & Landscape program, during an opening celebration at Field Farm.

Changing the location of the sculptures, from a strip of land near the ocean to the woodlands and meadows of the Berkshires, wasn't as much of a challenge, as it was an adjustment for Simpson, who received her MFA in ceramics from the Rhode Island School of Design in Providence and is part of the group exhibition, "Ceramics in the Expanded Field," at Mass MoCA.

"When I first got here, this was unfamiliar turf for me. I'm always inspired by new environment and mostly because I love that sense of wonder when I don't know who these trees are, what kind of grass this is, what these flowers are. I don't really know. I don't know what poison ivy looks like, for instance. And so I feel really naive. I feel so innocent and I'm in a state of wonder in this environment," she said.

"And so I feel like a visitor and I want to walk respectfully and I have to. I don't know who this tree is. I don't know what that plant is. I don't know how it will affect me. And so I approach it with caution but also care and respect. And when I showed up and saw these pieces here in this field, one of the most beautiful places I ever seen in my life I kept thinking what an honor to be here more than any building, any piece of architecture I could possibly imagine, that this field is the biggest honor I could imagine. And, that these pieces, get to get to last the seasons and watch this place so deeply and so long. They get to be sat on by birds. They get to watch the stars, go through the night, they get silence, they get winds, they get, you know, they get to watch the animals creep through the grass."

As part of the exhibition, Simpson will bring clay, harvested from around the stands of the sculptures, to Wisconsin, where she'll make beads with the community members, that will be added to necklaces that will be brought back and added to the sculptures.

It's a small way, she said, to connect the Stockbridge-Munsees with their ancestral homelands.

It's good to start thinking about what we can do to have reparations, to bring them home, to not just see it as a interesting thing, but as a call to action — as a call to heal, as a call to come home and feel these mountains in your soul, let the ancestors welcome you. Their ancestors are walking here still," Simpson said.

"What it would it be like to be torn from them, like that?," she asked. "I can't even imagine. I have the privilege of living in my ancestral homelands, where my history is so so, so deep there in my yard, in my backyard in my, my family that still lives all around me. I don't, I don't have that experience in the same way."

She is hopeful that work like hers will spark conversations that will help bring healing; help bring the Mohicans back to their homelands.

"I wonder how we can just start bringing awareness," she asked, saying that it's as simple as saying, "'Hey you need access to your ancestral, healing waters. How can we make that happen? You need to have a place that is yours to come home to, that you can pray at, that you can commune with your ancestors.'

"That's vital, having a place to listen to go and ask for direction and hear what they have to say, instead of calling across states for answers. That distance between them,  that is really hard. We can start looking at ways that we can return some land to those people and start bringing their presence back.

"I can tell the land wants that. The land is calling for its people back."

For more information about "Counterculture" and related programming, visit thetrustees.org/exhibit/counterculture/