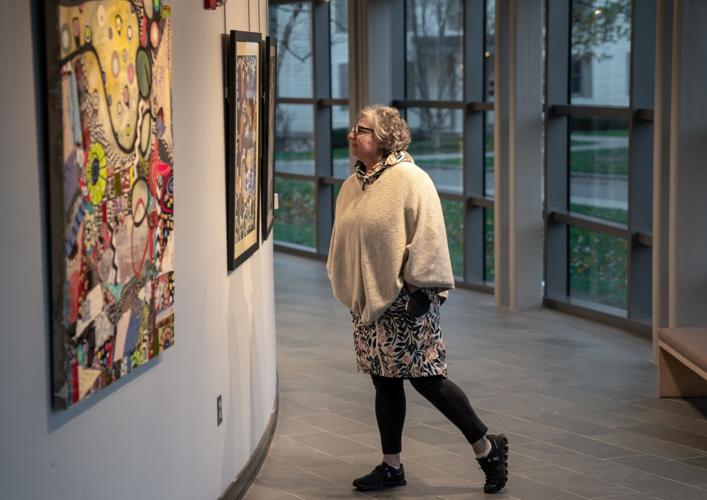 A visitor to the Corridor '62 gallery takes a closer look at a painting by artist Danny Simmons. Simmons' show, "Paint Where It Ain't," is on view at the '62 Center for Theatre and Dance in Williamstown through the end of January. 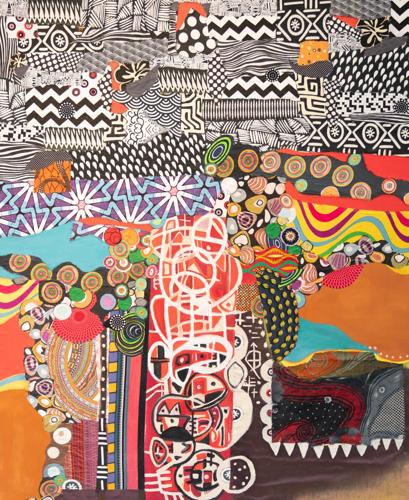 "Divination," is currently on view at Corridor '62 at the '62 Center for Theatre and Dance. 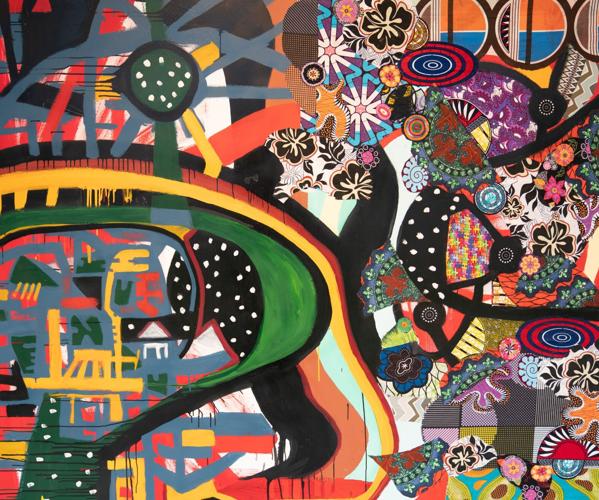 "The Golden Path," oil on canvas, is part of Danny Simmons' solo art show, "Paint Where It Ain't."

WILLIAMSTOWN — On one side of Corridor ’62, the unconventional art gallery inside of Williams College’s ’62 Center for Theatre and Dance, a glass wall overlooks the building’s driveway. On the other, a dozen artworks by international artist, poet and philanthropist Danny Simmons bring color and vibrancy to an otherwise pedestrian passageway that the gallery inhabits.

Before arriving in Williamstown, the paintings in “Paint Where It Ain’t,” on view in Corridor ‘62 through Jan. 29, 2023, were seen in major metropolises, at the Houston Museum of African American Culture, and Hudson Guild Gallery in New York City’s Chelsea neighborhood.

What: “Danny Simmons: Paint Where It Ain’t”

Admission: Free. Parking behind the building.

Painted in a style Simmons coined, Neo-African abstract expressionism, the works are imbued with a deep heritage of indigenous art that continues to the present.

“I’ve been collecting African art for 30 years now,” said Simmons, speaking by phone from his third-floor studio in his Philadelphia home.

Simmons is a man of both creativity and conviction. With his brothers, entrepreneur Russell Simmons, of Def Records, and hip-hop artist Joseph Simmons, “Reverend Run” of Run-DMC, he founded Rush Philanthropic Arts Foundation. He also co-founded “Def Poetry Jam” on HBO with Russell Simmons and several other individuals, winning a Tony for a Broadway version of the show. In 2015, he relocated from his native New York to Philadelphia, where he opened Rush Arts Gallery and art education center to support underserved artists and young people and is focused on community revitalization. His work is in the collections of the Smithsonian, Brooklyn Museum, Pennsylvania Academy of Fine Art and the United Nations, among others.

Much of the work on display was created during the pandemic shut down.

“As horrible as it was, the pandemic was a period when, because of the isolation, I spent most of my time working in my studio,” Simmons said. “I would get up in the morning and work all day, and it gave me peace of mind. Working on the art didn’t make me feel as isolated, it felt very freeing.

“My gallery was closed for the first year, so there was so much more concentration on just creating artwork. And I think it shows. My vision became more focused, works related to each other better than before. Even beyond that, I’ve kept up the practice of going to my studio every day. A lot of the work I created concentrated on connections between people, and how essential these are. They had a lot of interconnecting circles that really spoke to each other and interacted.”

“The colors became brighter, bringing light into the space that I’m in. The pigments have become more kinetic, more interactive with each other, with parts of the painting interacting.”

Previously, he felt more relaxed painting on paper rather than canvas. “Approaching canvas felt so formal,” he said, “with paper I felt freer.” During the pandemic, however, “I’ve been able to transfer a lot of the freedom I felt with paper to canvas, without feeling restrictions.”

While Simmons didn’t attend art school, he amassed an eclectic array of artistic influences over the years, from European modernists to Cuban painter Wifredo Lam, to abstractionists like Norman Lewis. He includes Basquiat, but says he left the figure alone when he found gestural mark making — free flowing, often intuitive, strokes resulting from an artist’s movement.

“Most of my influences come from the African art I collect. Patterns that come out of indigenous cultures like aboriginal and African cultures, body painting, barkcloth painting by Mbuti pygmy people of the Congo, set me on a path of making marks to tell stories.”

“There are great contemporary artists coming out of Africa,” he added. “A lot of the abstracted work, I’m feeling the earthiness of it.”

Most modern impulse comes from indigenous impulse, he noted. “I’m trying to get closer to emoting what makes us human. From before modern painting, humanness comes out through art.”

At Williams, the painting “Jungle Boogie” is an example of works Simmons has created on Mbuti barkcloth. “I find it very refreshing using that material as a surface to paint on,” he said.

One work on display, “The Golden Path,” formed part of a triptych blown up and shown in Philadelphia International Airport all last year as a wall mural. “When I put it together, I renamed it ‘Travel Mercies,’ and it became 30 feet long and 10 feet tall,” Simmons recalled.

Growing up in Queens, Simmons credits his parents with encouraging his creativity.

“My mother was an amateur painter, she used to sit me down as a child and paint. My father was a teacher, a writer and a poet. [Now] I have a novel and several books of poetry published.”

Simmons studied at New York University to become a social worker, but soon decided he needed to switch careers. “I dove into painting and writing,” he said. “My brother Russell helped finance my first couple of years until I really started selling work. I opened Rush Arts Gallery and jumped into the art world on two levels, as an artist and as a person who created opportunities for other artists.”

While he hasn’t yet visited Williamstown, Simmons has a strong connection to the town through Rush Arts Gallery director, Noah Smalls, who also is the director of exhibitions and collection management at Williams College Museum of Art. Show curator Shawnette Smalls, who is married to Noah Smalls, works with MCLA’s Gallery 51 and manages educational youth art programs in Philadelphia and beyond supported by Simmons’ philanthropic endeavors.

“Shawnette was instrumental in making sure those art education classes stayed intact during the pandemic,” Simmons said. “She spearheaded digital outreach, working with students all over the country and internationally in Jamaica.

“At Rush Foundation, we’ve always believed art needs to be an integral part of every young person’s life and education,” Simmons explained. “It expands their creativity, no matter what industry they go into, and helps them come up with creative ways of looking at problems. Our point was never to create artists, but to create a generation of creative thinkers, and also espouse artists underrepresented by the mainstream.”

“Students do infinitely better in all subjects when they have art in their curriculum,” he added. “At college age, when you’re deciding what to do with your life and how you want to engage society, I think art is essential to help you navigate that process.

“There are many problems we face today as a society, and we need creative thinkers to help us get out of this mess we’ve gotten ourselves into.”

Corridor ’62 was designed as an exhibition space for the community to engage with visual art at the active performance venue. When Williamstown Theatre Festival is in residence each summer, it displays vintage posters and photographs from the Festival’s storied past.

Shawnette Smalls led a team of students from the Williams Graduate Program in the History of Art — Nicholas Liou, Destinee Filmore and Jordan Horton — to mount the exhibit. The team’s first group show in Corridor ’62 was in spring 2022.

“The students wanted to curate some work to practice,” Smalls explained. “I’m just a facilitator, trying to guide them and help them use what they are learning.”

“These particular works spoke to them and their design of the wall. They have a lot of thought sense and different ideas, which is really helpful.”

“I have a background in fashion design, so I took care of the African textiles he uses in his artwork,” Shawnette Smalls said. “He cuts and pastes the fabrics, then uses paint to accent it or as an additional piece of the work.”

“The colors, the vibrancy, the use of textiles is really what I am drawn to,” she added. “He uses a lot of bright colors, reds, oranges, happy colors.”

The exhibit arose from the serendipity of Simmons’ art from his recent Hudson Guild show being temporarily housed in Williamstown while the Corridor ’62 show was being planned.

“The opportunity to work with Danny’s work came out of the blue,” Smalls said. “He was all for it, he is an advocate of learning and having students and emerging artists and curators work on his projects.”

The students weren’t familiar with Simmons’ work before this, she said.

“We picked out pieces that we thought would work for the space. I love the idea of it’s just a hallway of students walking through and seeing a dramatic piece, something that will stop them.”

IF YOU GO What: “Danny Simmons: Paint Where It Ain’t”

Admission: Free. Parking behind the building.