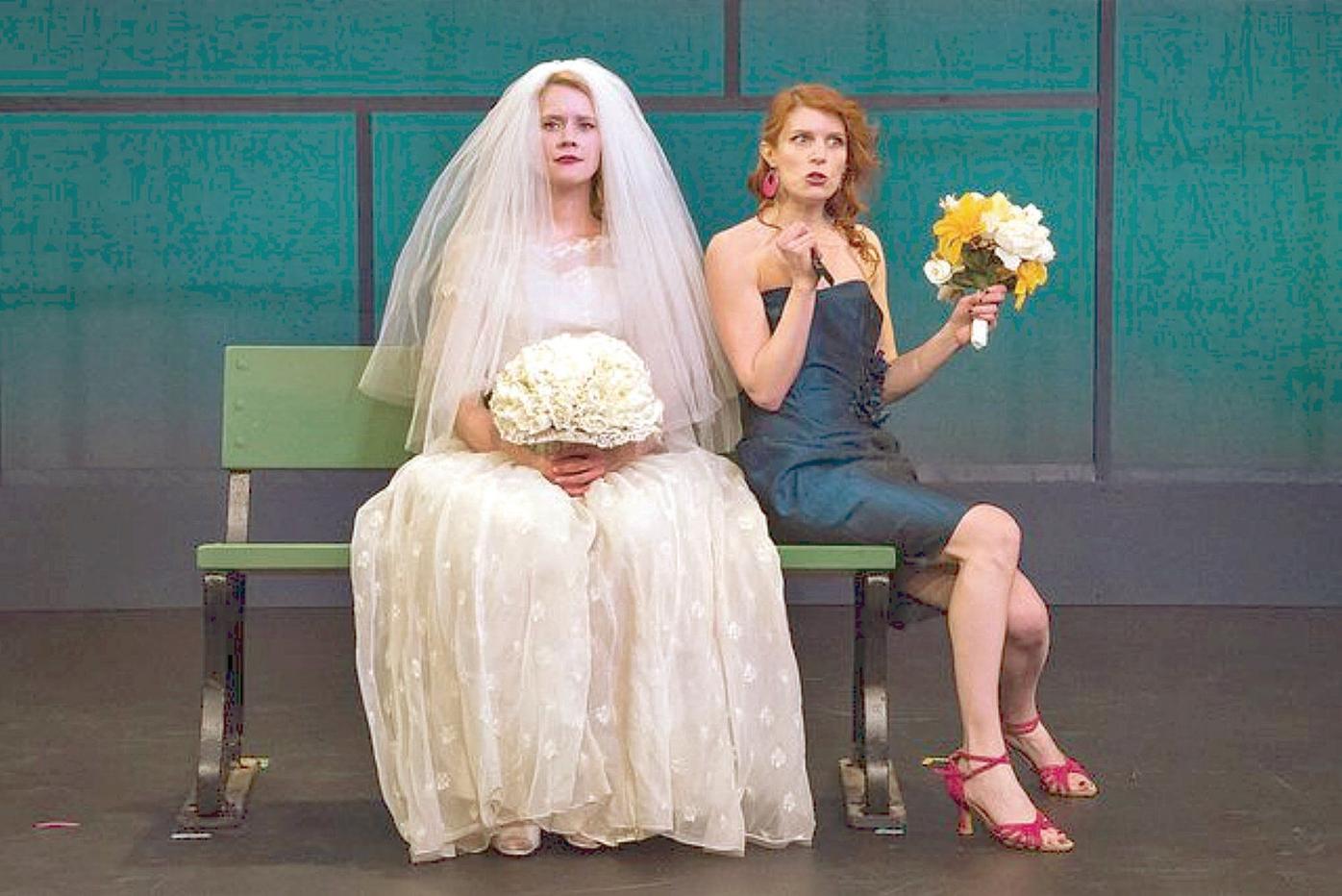 Sarah Goeke is the essence of apparent calm as a bride moments before her wedding, and Keri Safran is her flower-allergic bridesmaid, who struggles to keep her strapless dress from falling down, in Brad Sytsma's "Cold Feet," in Barrington Stage Company's "10X10 Plays" at St. Germain Stage in Pittsfield. 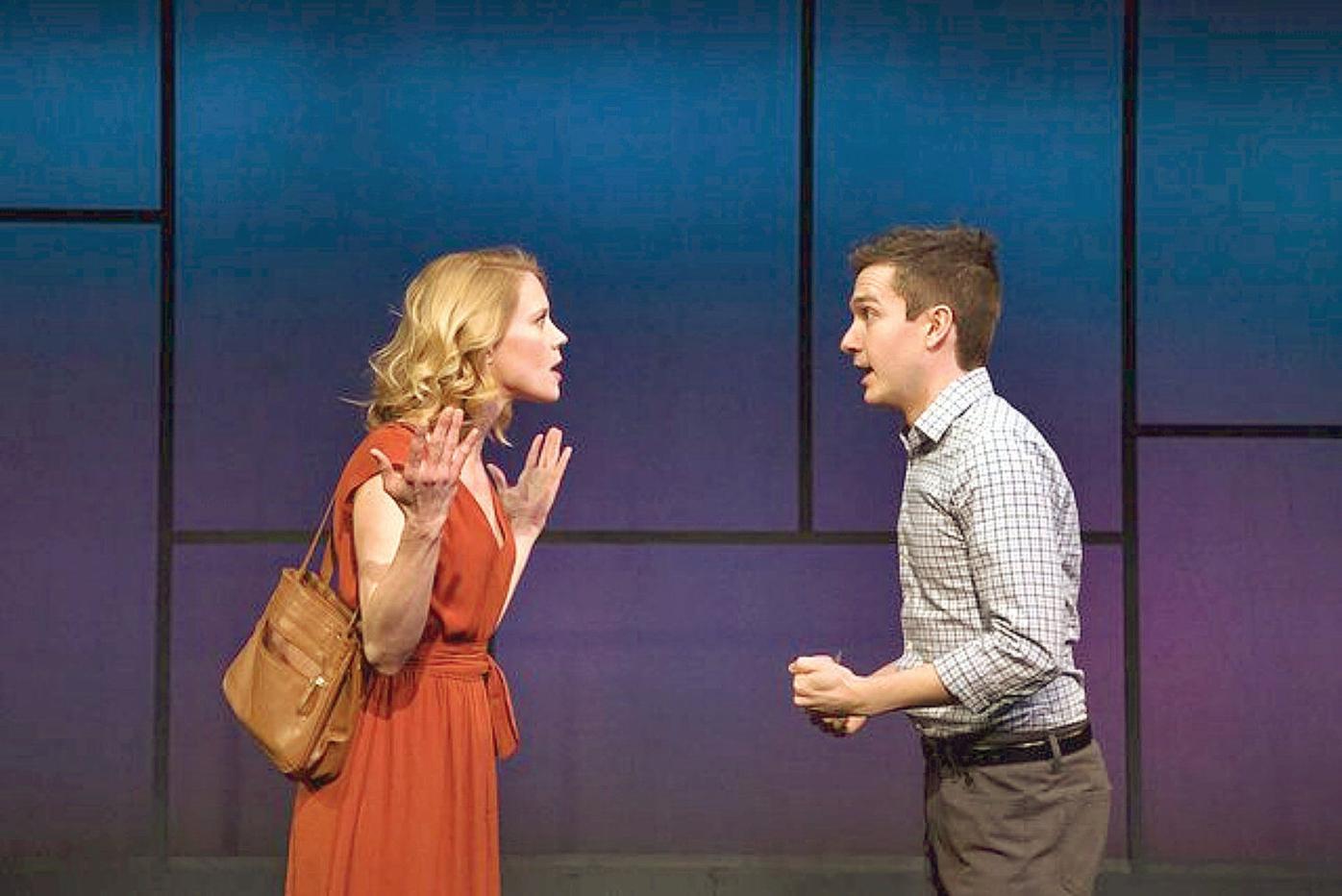 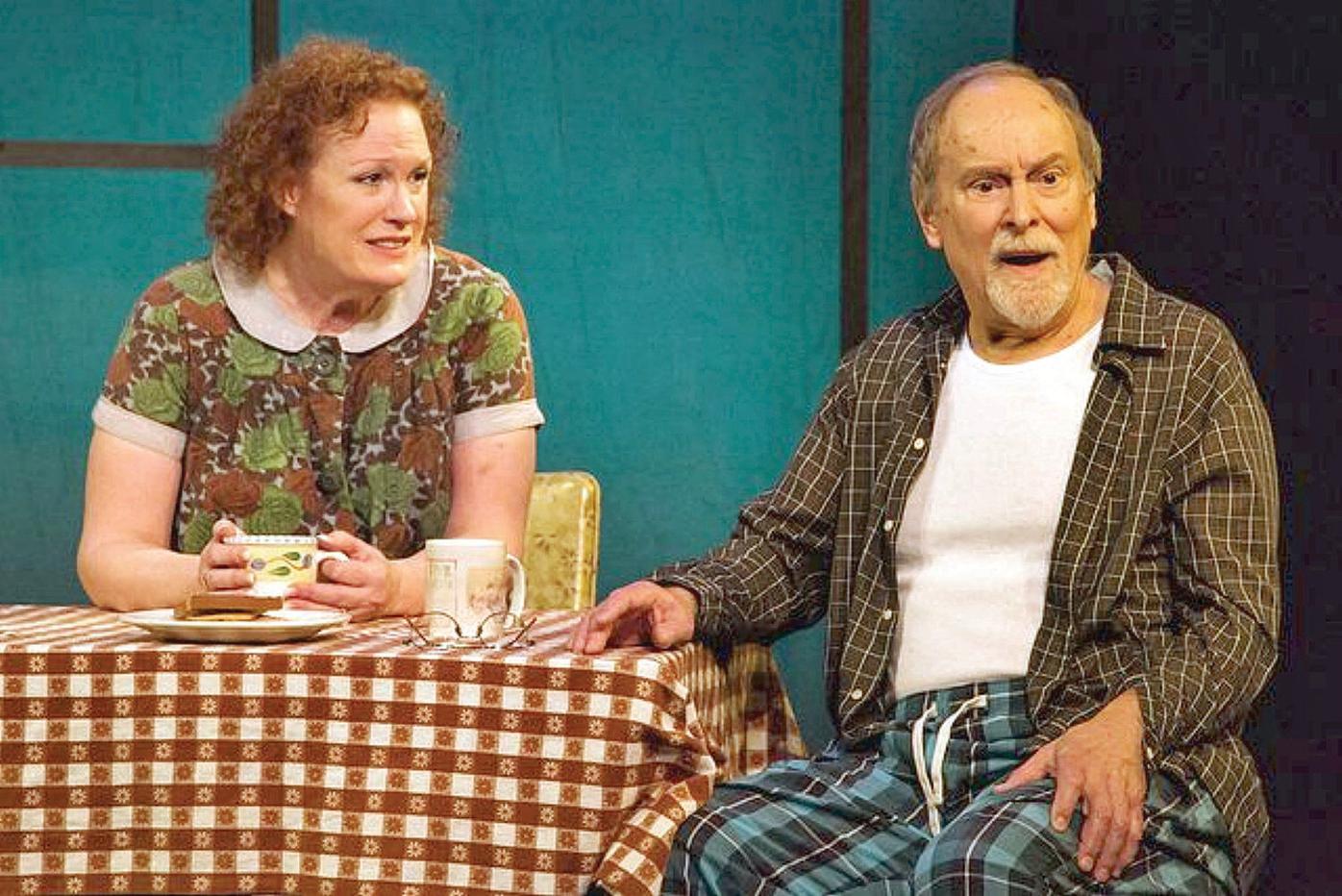 Sarah Goeke is the essence of apparent calm as a bride moments before her wedding, and Keri Safran is her flower-allergic bridesmaid, who struggles to keep her strapless dress from falling down, in Brad Sytsma's "Cold Feet," in Barrington Stage Company's "10X10 Plays" at St. Germain Stage in Pittsfield.

PITTSFIELD — L.H. Grant's "Double Entendre," the first of the 10 short plays in Barrington Stage Company's richly entertaining eighth edition of "The 10X10 Plays" is set, the playwright says, "in the eye of the beholder, a vacant space where people are standing on line waiting for one thing or another."

A young man, Randy (Michael Fell) initiates a conversation with the woman immediately ahead of him on the line, Chloe (Sarah Goeke), with a seemingly innocuous observation: "It's a beautiful day." And, in the age of #meToo, Chloe hears meanings in his opening gambit. Chloe reads nothing but sexual connotation and innuendo in words that, from her point of view, reduce her to little more than an object of typical male lust. She views everything he says through that prism. Poor Randy has little defense against Chloe who, at one sly moment, toys with him, playing him like a virtuoso soloist.

It's a sublimely witty, clever, insightful piece played with consummate skill by Goeke, Grant and, as a newcomer to the waiting line, Keri Safran.

It is simply a wonderful beginning to an evening that is played to the hilt by a thoroughly accomplished, appealing and resourceful ensemble that also includes "10X10" veterans Peggy Pharr Wilson and Robert Zukerman, and DeShawn Mitchell

If how we hear things is at issue in "Double Entendre," how we see things frames Chris Shaw Swanson's "Kid Stuff" in which one parent's gun is another parent's telescope as they react to their eight-year-old child's school art project. In lesser hands, Swanson's concern about gun violence in schools might well have descended into a screed but, together with this amiable cast — Goeke and Mitchell as the parents, Safran as the school principal — "Kid Stuff" makes its points with insight, wit and grace.

The Tens each year have tended to be something of a mixed bag — ranging from the memorable to the forgettable with an acceptable middle ground; not surprising with an anthology format.

This year, however, the selection committee has struck gold with eight masterly plays and two that don't fall far short, directed by Julianne Boyd and Matthew Penn.

What impresses most in this year's "10X10" is the complexity, the layering in plays whose lengths hover around 10 minutes. Less is definitely more at BSC's St. Germain Stage, where The Tens opened over the weekend. That's particularly in the program's penultimate "Eddie and Edna" by Donald Loftus, in which a seemingly harmless conversation over the breakfast table between a longtime elderly married couple, Edna (beautifully played by Peggy Pharr Wilson) and her rambling husband, Eddie (Zukerman), becomes a poignant, quietly wrenching journey through time and memory. Directed by Penn, this is such a delicately played love story about the members of a family — wife and mother, father, son (Fell); what is real and what is not; how reality and unreality come to be defined in a mind that is sliding into a fog bank of reality all its own.

Social and political issued are often at play in "10X10" but the issues are, for the most part, shaped by the characters, rather than the other way round.

Scott Mullen's "172 Push-Ups" deals with a generational clash of values as a crusty. curmudgeonly widower, a socially conservative Vietnam War veteran named Tom (Robert Zukerman) sitting on a bench outside a bus station, is joined, by chance, by a young female soldier, Quinn (Safran), who is waiting to be picked up by her partner, Jenny (Goeke). Quinn has returned home after her final tour, presumably in Iraq or Afghanistan, and is preparing, unbeknownst to Jenny, to propose to her later that evening during a family gathering. The arc and resolution of "172 Push Ups" are not surprising but, under Penn's direction, Zukerman, Safran and Goeke perform with honesty, understanding and authenticity.

In "Charlottesville," all a single mother named Dani (Wilson) wants to do is fish in her local pond but the world becomes too much with her when her adult daughter, Carrie Anne (Safran) spots her brother Seth (Fell) in a Facebook photo taken during a demonstration over the removal of a statue of Gen. Robert E. Lee, and is convinced Seth was among a group of five men who brutally beat a young man during the rally. It's a truth Dani does not want to accept, despite what appears to be mounting evidence.

In the well-played, whimsical "The Chapel Play" by Lila Rose Kaplan, a "Twlight Zone"-tinged encounter between two strangers (Safran and Mitchell) in a chapel leads to an intriguing examination of what it means to live one's life on one's own terms. The play falters toward the end but Safran and Mitchell hold our engagement.

Wilson and Zukerman have at it in Steven Korber's second half-opener, "Twas the Day After Christmas," which pits Wilson's beleaguered store manager, Iris, against a scheming, disgruntled, obstinate customer-from-Hell, Mr. Klemsted (Zukerman), who is playing out his yearly day-after-Christmas ritual — returning the artificial Christmas tree he has purchased at the store in exchange for a refund or, at the very least, a store credit. This year, however, the rules have changed. Their steadily escalating encounter is a delicious, wicked can-you-top-this exercise in territorial imperatives.

Less successful is the credibly played "Organic Seed" by Patrick Gabridge in which two farmers (Goeke and Zukerman) whose philosophies of food-growing are polar opposites wind up in neighboring booths at a farmer's market. The play wears its ideologies on its sleeve and, despite what otherwise might have been a neat twist, goes nowhere.

In Michael Brady's "Pipeline," three environmental activists, played by Wilson, Mitchell and Goeke, wind up in the frontline of a protest against an industrial combine that is tearing down a state forest in order to build a pipeline. It's a credibly played piece that is more effective as character study than a lesson for the already converted.

"10X10," which begins with bang, also ends with one, a somewhat bigger one, in fact. In Brad Systma's "Cold Feet," a go-for-broke, played-to-the-hilt farce, a bride (Goeke) sits patiently on a bench, apparently oblivious and immune to the chaos raging around her moments before the ceremony as the best man (Mitchell) is engaged in a frantic search for the wedding rings; the groom (Fell) is having second thoughts and getting progressively inebriated as his resolve to marry begins to dissolve; the bouquet-carrying, flower-allergic bridesmaid (Safran) struggles to keep her strapless dress from falling down; the bride's already emotional mother (Wilson) is apopleptic because the groom has seen his bride-to-be before the ceremony; and the father of the bride (Zukerman) is determined to put everything in order. Under Boyd's direction, "Cold Feet" is exuberantly played at a pitch that knows just how far it can extend without exploding into excess.