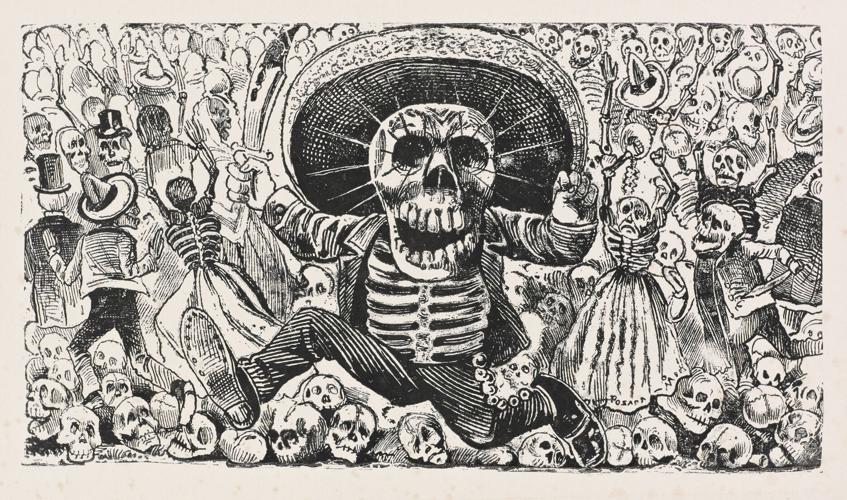 José Guadalupe Posada's "La Calavera Oaxaqueña Calavera del montón. Número 1," on loan from the Amon Carter Museum of American Art, is part of an exhibit of the artist's work currently on view at The Clark Art. 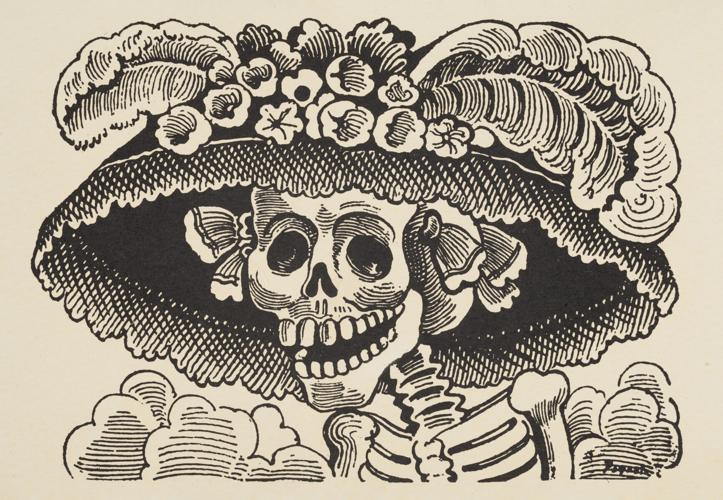 José Guadalupe Posada's "La Calavera Catrina" is one of the artist's most recognized works.

WILLIAMSTOWN —  When José Guadalupe Posada created his most iconic work, a dapper skeleton decked out in a floppy, wide-brimmed hat festooned with feathers, she was not known as "La Calavera Catrina," as she is known today, but as "La Garbancera" — "The Garbanzo Vendor."

Admission: $20. Free for 21 and under, students with a valid ID; active duty military; Massachusetts teachers with faculty ID  or MTA card; EBT Card to Culture or Museums for All card holders.

She was a satirical portrait of ordinary Mexican women who emulated the aristocratic airs of European women at the turn of the 20th century, accompanied by the verse, "You're just another pile of bones."

Catrina, as she would come to be known, grew in fame after she was included in Diego Rivera's mural, "Dream of a Sunday Afternoon in the Alameda Central," where she was clad in a white gown, standing beside Posada and Rivera's wife, famed painter Frida Kahlo.

One of the most influential of all Mexican artists, Posada, also is one of the least recognized by name.

Nevertheless, most people are familiar with his imagery, especially that of "La Calavera Catrina" which has become synonymous with and an icon of Dia de Muertos (Day of the Dead), as are Posada's other calaveras. In pop culture, his calaveras appear on posters, tickets and other merchandise of The Grateful Dead.

"Many people will be sort of, at some level, familiar with his imagery. But really to present this artist in all his variety is a great opportunity. He is underrecognized, at least in this region, not necessarily in Texas or along the Mexican border, but I think, in the Berkshires, this will be a real discovery," said Anne Leonard, curator of prints, drawings and photographs at the Clark Art Institute.

On view at The Clark through Oct. 10, "José Guadalupe Posada: Symbols, Skeletons and Satire," is a broad look at the artist's career as a illustrator, lithographer, caricaturist and political satirist, as well as his influential role in informing and shaping popular opinion. The exhibition, curated by Leonard, is drawn from the extensive holdings of the Amon Carter Museum of American Art in Fort Worth, Texas.

"He was working mostly during the leadership of Porfirio Diaz who is sort of a dictator of Mexico — a repressive leader, an authoritarian leader, but one who also modernized Mexico to a great extent," Leonard said. "During that period, caricature was a little bit risky, at least overtly political caricature. But Posada did all kinds of illustration. He was illustrating for news sheets called broadsides. He was illustrating for all kinds of periodicals. He had a very long association with one printer, one print shop in particular, that of Venegas Arroyo. So he was always working on always generating more for these news sheets."

Illustrations accompanying news on broadsheets were of particular importance in pre-revolution Mexico, she said, as at that time, there was a very low literacy rate.

REVIEW: 'Rodin in the United States' offers a unique perspective of the 'love story' between Rodin and American collectors

"So for every broadside, there's text, there's an image, there's a title, there are borders — all of this was intended for a public that was part literate, part semi-literate. But for even people, who had no way of understanding [the text], they could get the message of the sheet from the images. Posada is a marvelously gifted artist in a lot of ways, but one ways in which he is especially gifted is by packing a lot into an image, giving a lot of punch, a lot impact, a lot of energy and vibrancy."

Born in Aguascalientes, Mexico, in 1852, Posada was one of eight children. He attended the Municipal Drawing Academy of Aguascalientes, before apprenticing as a teenager with Jose Trinidad Pedroza, where he learned printmaking, typography and etching.

"He moves with his mentor to a place known as Leon, to run a print shop. He stays there, he marries and he eventually takes over the print shop. By 1888, when he is 30, he goes to Mexico City and that is where he stays until his death. He has an incredibly prolific career. He certainly made thousands of images, with some people estimating that he made tens of thousands," Leonard said.

Although best known for his calaveras, they makeup only about 2 percent of his surviving works.

"They were a big part of his visual vocabulary," she said. "They were coming from this tradition of the Day of the Dead and the Dance of Death, but he infused these calaveras with a lot of fresh life. They're full of life. They're these comical figures  and they do everything."

In one illustration, the skeletons are riding bicycles, in another, a skeleton is riding a horse — a homage to the kids who delivered the news sheets on horseback.

"He could use them for political satire. This was a way to avoid censorship, because they aren't portraits of pure politicians," Leonard said. "They're stand ins, and just super fun in the way he is using skulls and very animated skeletons to say something about the present political state. In this case, this [illustration] is about the presidential election and these are the different candidates. There's a commentary with it, but, the actual politicians are not portrayed."

Posada's legacy is much broader, she said.

Included among the 55 illustrations and 5 printing blocks on view are images made for broadsheets — images of executions, bullfighters and natural disasters. There also are images accompanying fantastical stories, of devils claiming the vain and the wicked; of large animals consuming children who wandered off, a board game and examples of the 110 miniature children's history books he illustrated.

"He was a very gifted graphic artist," Leonard said.

Admission: $20. Free for 21 and under, students with a valid ID; active duty military; Massachusetts teachers with faculty ID  or MTA card; EBT Card to Culture or Museums for All card holders.