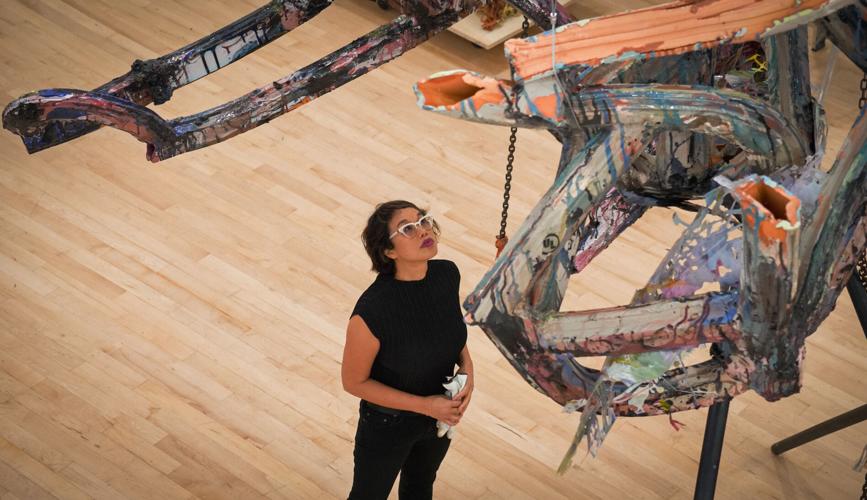 Linda Sormin oversees placement of individual pieces within her installation, "Stream," 2021, part of the new exhibit, "Ceramics in the Expanded Field," opening at Mass MoCA. 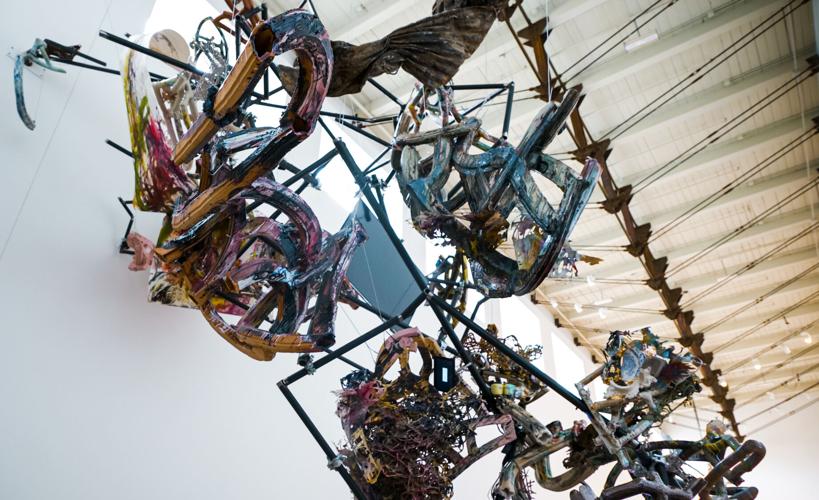 A view of "Stream," an installation from Linda Sormin. 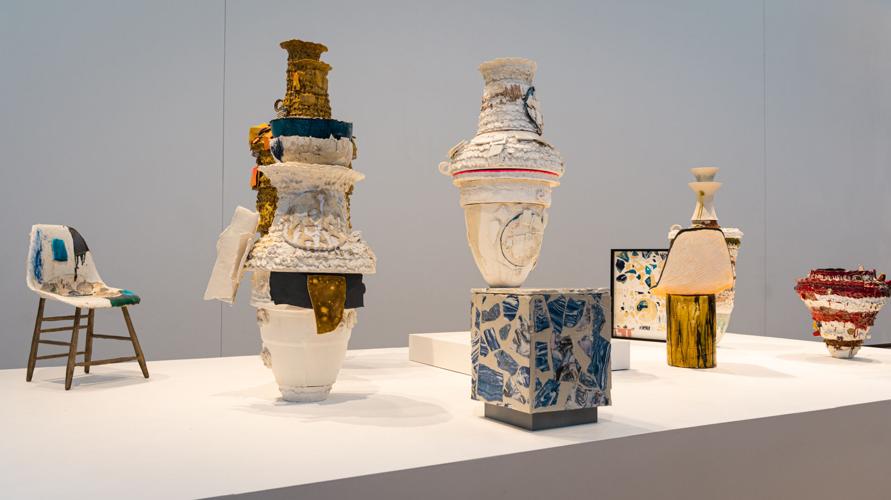 Nicole Cherubini's work, part of "Ceramics in the Expanded Field" at Mass MoCA.

The division between the worlds of craft, decorative and fine arts has been slowly dissolving for the past decade. A new exhibition at the Massachusetts Museum of Contemporary Art aims to shatter what's left of those barriers.

What: "Ceramics in the Expanded Field"

COVID-19 safety protocols: Masking indoors is required, regardless of vaccination status for staff, patrons, tenants and customers over the age of 2 except when eating or drinking in designated areas. As of Nov. 1, physical or digital proof of full COVID-19 vaccination (2 weeks after final dose) is required. Photo ID is required for all visitors over 18. Children under 12 who are not vaccinated must be accompanied by a fully vaccinated adult.

"Ceramics in the Expanded Field," opening Saturday, Oct. 16, brings together eight artists who integrate ceramics with other artistic practices, including photography, video, painting and performance.

"This group of artists is as different as they are similar," said Susan Cross, Mass MoCA's senior curator of visual arts, in a recent interview during installation of the exhibition. "They are all working with clay and integrating with other mediums; looking at the history of the materials."

While each artist integrates clay into their practice in a different manner, she said, each also emphasizes how clay is embedded in our everyday lives, our cultures and our histories, including colonialism and patriarchal systems, capitalism and globalization.

"Ceramics has long been undervalued because of its association with the domestic sphere, with women's labor and Indigenous cultures, with many marginalized and non-Western cultures," Cross said. "But ceramics is no longer siloed into a singular category. These artists are showing a medium in conversations with other materials, other modes of practice."

For many of the artists, the exhibition is allowing them to work in a scale that is new in practice, but not in concept, she said.

In Linda Sormin's latest work, "Stream," a site-specific installation created for the exhibition, metal poles and scaffolding climb the two-story gallery space, reaching upwards as they intertwine with large ceramic pieces intricately and carefully placed by the artist. Woven in the mesh of metal and ceramics are video monitors, filled with images and sounds of water, of streams, of dripping water — all on loops.

"I'm really into the wet changeability of clay. I'm inspired by how it goes through extreme heat and fire," said Sormin, a New York City-based artist whose work also has been exhibited at Ferrin Contemporary. "The colors [in 'Stream'] echo the natural landscapes of Indonesia, where my ancestors are. My ancestors were Batak Toba and North Sumatra, whose villages are built in and around thick, deep foliage.

"I spent time there in 2014, and I was just really immersed in the humidity and the rich colors. Batak Toba architecture has red, black and white in it and it's very highly carved and decorated. The architecture embodies the people's understanding of the lower, the middle and the upper worlds. Snakes and dragons and mythological creatures and animals live in the lower world. I like to think of it as subterranean. People inhabit the middle world and the upper world is inhabited by deities and things that aren't as describable."

But "Stream" in neither architecture or an environment, she said.

"It's a stream of consciousness approach to moving through spaces. When I was building this in the Netherlands, I was crawling on the floor. I spent a lot of time building on my knees and moving my body through the space. I don't usually get a chance to inhabit my sculptures in that way. It was this slow process of moving my body in the space, under and around the clay. I felt really immersed in this stream of consciousness."

The installation, Sormin said, takes it name not only from that feeling, of a stream of consciousness, but also from a stream of water and a stream of associations.

While creating several of the ceramic pieces for "Stream," during a residency in the Netherlands this summer, Sormin said she was aware of the underlying issues of colonialism, of colonization that impacted her ancestors.

"There was a kind of a moving point of tension, knowing that the Dutch were the people that colonized Indonesia. So spending time in residencies, in Indonesia and in the Netherlands, was one way of me traveling towards the past of my family's history and collecting information, not necessarily making sense of the experiences, but at least confronting some of the ugly histories, of colonization's impact on my family," she said.

"I think that generational trauma was embodied in the fracturing, in the breaking of a lot of the pieces [in this work.] But also, I wanted to express the buoyancy and the resilience, of the will to live and the will to thrive that humans have in the face of violence and loss; that my family still worked to survive, to create, to keep creating. That's where a lot of the color comes in — I wanted that energy, that sense of buoyancy and beauty; that tension and fracture. I wanted to be honest about it in this work."

Shards, fractures and fragments appear in almost all of the works in the show, Cross said.

For Nicole Cherubini, an artist who lives and works in Hudson, N.Y., shards, fragments and fractures are an essential part of the underlying conversations of her work.

"I've been really thinking about the idea of the object, the idea of ownership and when something breaks. I've been thinking about the trajectory of an object and how we always feel that if something breaks we have to put it back together," Cherubini said during a recent interview at Mass MoCA. "But, why can't it become two objects? Or be put together in a different way to change the conversation; the history of the object? Or to create a new space to exist in?  There's the idea that a fragment doesn't have a subject anymore."

Her clay vessels, are rugged and delicate at the same time, straddling the space between decorative and functional. They, of course, are non-functional, large in scale, full of unexpected cracks and holes, covered in shards and fragments from other works.

"I went to undergrad for clay, for ceramics, at [Rhode Island School of Design]. I've always loved the material, but I was always confused at how to use it and sort of the idea that it could be anything, but had such a specific history. So I started to address the history of the material and the ideas of function and labor and purpose. That's sort of the underlying full conversation," she said, noting that conversation carries over into her other works of photography and performance art.

And there's also the omnipresent conversation about whether or not clay, ceramics belongs in collections of craft and decorative works, or should be considered part of the fine arts.

"When I started using clay and started showing it 15 years ago — and that's what is so amazing about this show — is that there really wasn't any clay being shown. So, I really thought of putting this material out in a position of an act,  in a sense that noone wanted to see it, that it didn't really have a place.

"This work," she said, gesturing to her own pieces, "wasn't really made for the craft world. No one in the fine arts world wanted to see it because of these deep conversations about displays of art. It was kind of like my punk rock act of trying to put it out there, sort of a political act. It was very much, deeply based in a feminist conversation, which it still is."

WILLIAMSTOWN — When two members of the art activist group Guerrilla Girls came to speak at Williams College in March 1988, they were still ver…

The chance you'll be hit and killed by a meteor is unlikely, about 700,000:1. The slight chance of it happening inspired Amy Hauft

When entering the third floor exhibition space of Mass MoCA's Building 4, the vast openness of the gallery is striking. The emptiness is intentional, as Amy Hauft's three-piece installation, "700,000:1 | Terra + Luna + Sol," is all about individual perspective and self-awareness; about our individual scale in relation to what's around us, to the greater universe.