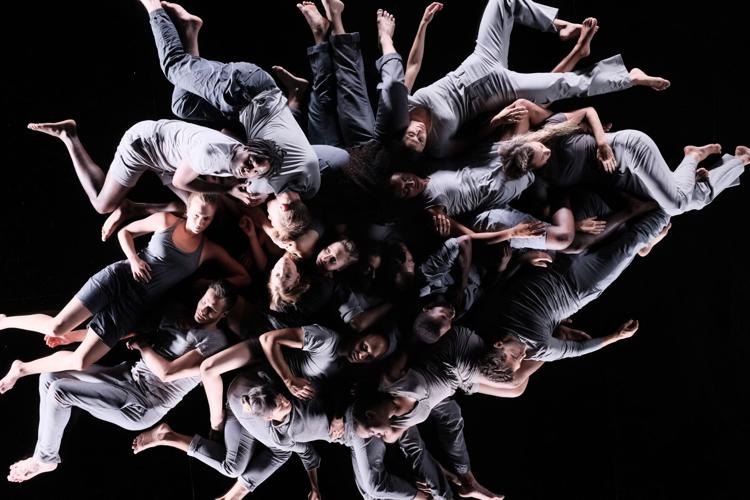 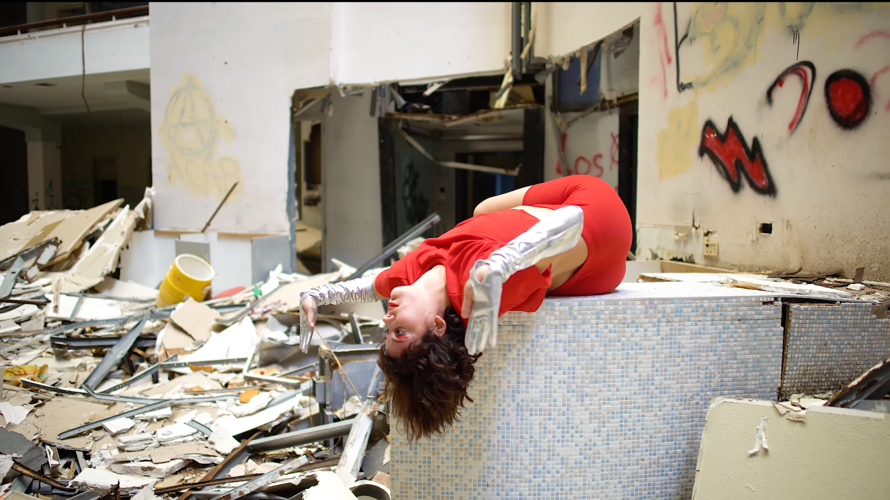 NORTH ADAMS — The long video works at either end of “Choreopolitics,” now on display at the Massachusetts Museum of Contemporary Art, are two different but complementary ways artists can use movement to project meaning and power. Brendan Fernandes creates a precisely plotted narrative of violence, community, and healing. And nibia pastrana santiago unfolds an improvised and languid improvisation among the ruins of her immediate surroundings.

One is refined and careful, the other is spontaneous and frantic (each is sometimes perfectly still, with no movement at all). But both bristle with ways artists can fill and manipulate space, build on one another, and jostle viewers into rethinking where they are.

On view through the end of the year, the show brings these two artists into a gallery space through photos, videos, and posters. Each is in tune with how their work puts bodies in motion to untangle the threads binding us about race and gender, capitalism and colonialism. Each is grounded in a deep tradition — ballet — with its systems of authority and rules, and fully explores the idea of resistance and freedom that comes from consciously breaking away.

The show is curated by McClain Groff, a graduate curatorial fellow in the Williams College Graduate Program in the History of Art. She said the idea was to consider art that integrates physical work and dance and performance, eventually coming to focus on these two artists.

“Their work is very different,” she said. “Brendan is much more about clean lines, stark intensity, and seriousness in a very powerful way. Whereas nibia does a lot more with absurdity and silliness, because she feels that’s the only way to deal with the intensity of Puerto Rican life. I think that tension and difference works well together.”

The show begins with a video installation of pastrana santiago’s “No More Efforts” (2020), a freeform dance performance inspired by the postmodern dance tradition she studied in Puerto Rico. Rather than repeating a set of formal procedures, it responds to the immediate world around the artist.

In the 9-minute long piece, she wears a bright red outfit and long silver gloves, and poses in the rubble inside an abandoned hotel lobby. The space had been the Normandie Hotel, a once glamorous tourist destination in her home city of San Juan, but which has been caught in a debt death spiral like much of the island’s economy for years. She splays herself on piles of debris, positions herself on broken furniture, and generally seems languid and slow. The piece is about the power of laziness, of non-participation in a system of capitalist labor that extracts value in only limited ways.

The film later moves to a nearby athletic field, where she goes through a much more energetic set of improvised gestures — power walking, leaning against walls, gesturing to the sky, rolling and seeming to disappear in some deep grass. Along with it is a soundtrack of shouted slogans and observations, both politically charged and absurd (speculation about the gastrointestinal system, for example). It is presented in a disharmonic chants and loud imitation opera, as disorienting as it is silly.

This sardonic streak is in her other work here as well, including a series of wall posters full of provocative statements in garish graphic design — including a little Comic Sans — about the the creative process. One older piece, “The Lazy Dancer” (2013) is a manifesto urging creators to “make an effort to be lazier,” insisting that “the lazy dancer has no duty to dance.”

In contrast, Fernandes’ work is more formal and apollonian by comparison. Several of his photos from the “As One” series position ballet dancers along with African masks, juxtaposing different traditions in a way that acknowledges the power dynamic in the context. This is an important point in his work — he was well on his way to a career as a professional ballet dancer when his career was derailed by a serious injury, leading him to questions and reevaluate his work.

But that awareness of movement and space endures, including three pieces from his “Tumbler” series. These are large wooden structures that resemble giant jacks. Groff has arranged them to block off a portion of the gallery. Little strips of leather hint at their real purpose — these are intended as props for dance performances, which may take place later this year. But for now, they are just obstacles that visitors have to maneuver around.

In an interview shortly after the exhibit opened, Groff said the piece reflects concepts one learns in ballet training. “Everything is about lines — where is your leg, where is your head, are you on a diagonal or are you straight front,” she said. “This is very minimalist and linear in so many ways.”

Groff also seriously studied ballet, and still carries it with her. “That’s always been on my mind and informs so much of what I do, whether I realize it or not,” she said. “The way I organize my time, or how I move through space, or my relationship to artwork when I am in a museum.”

The final piece caps the experience of what can be said with movement. “Free Fall, for Camera” (2019) is a filmed dance performance with a large group of dancers who walk around a blank space wearing plain gray clothes. As they move, one suddenly falls, and what follows is an array of bodies falling and rising, leaning on one another, moving in coordinated sharp straight lines and synchronized arm movements.

You don’t need to know it, and there is nothing to signal it in the piece itself, but it was conceived as a response to the Pulse nightclub shooting in Orlando in 2016, when a shooter killed 49 mostly Latinx and LGBT people. As the piece intensifies, you begin to see the patterns emerge — the bursts of violence and shock, the sadness and confusion expressed through small gestures like a brush against a shoulder, a hesitant glance, a quick look away.

What does it mean to live in the ruins of the future? At Mass MoCA, Marc Swanson's answer is catastrophic beauty

And there are bigger, harder to miss movements, of bodies falling in piles, red and blue lights flashing as at a crime scene. And then other ones, of individuals and groups helping one another up, gathering in solidarity and protection, before settling back into the familiar pattern of placid movement through an ordinary space. It is a piece that reaches to bring in everything, a poem about tragedy and sadness, but also the improvised communities we form and reform as we move through our lives.