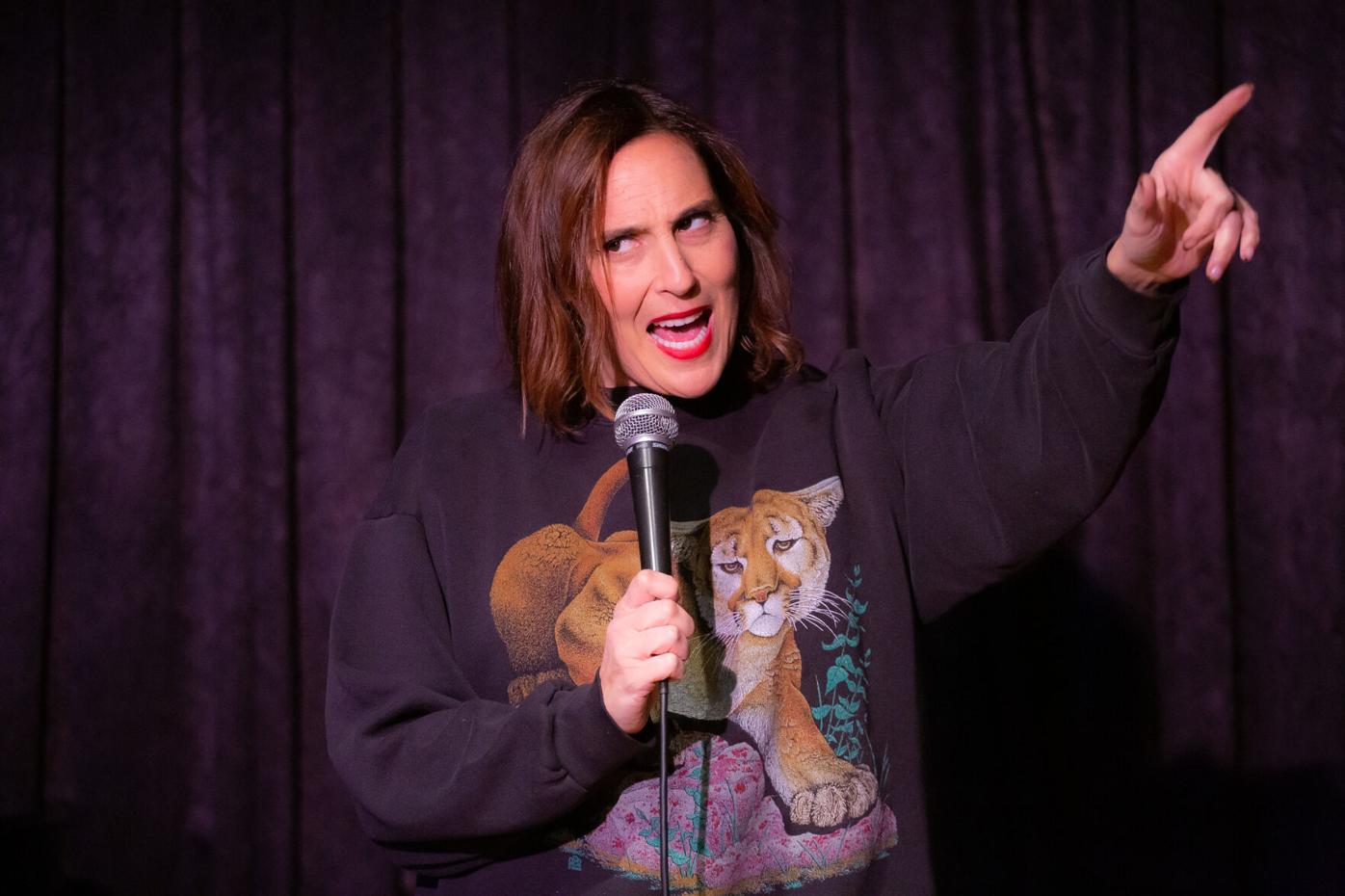 Writer, actor and musician Melanie Greenberg tells her own story in the form of the psychedelic cabaret "The Elephant in the Room" on Fridays at the Apple Tree Inn in Lenox. 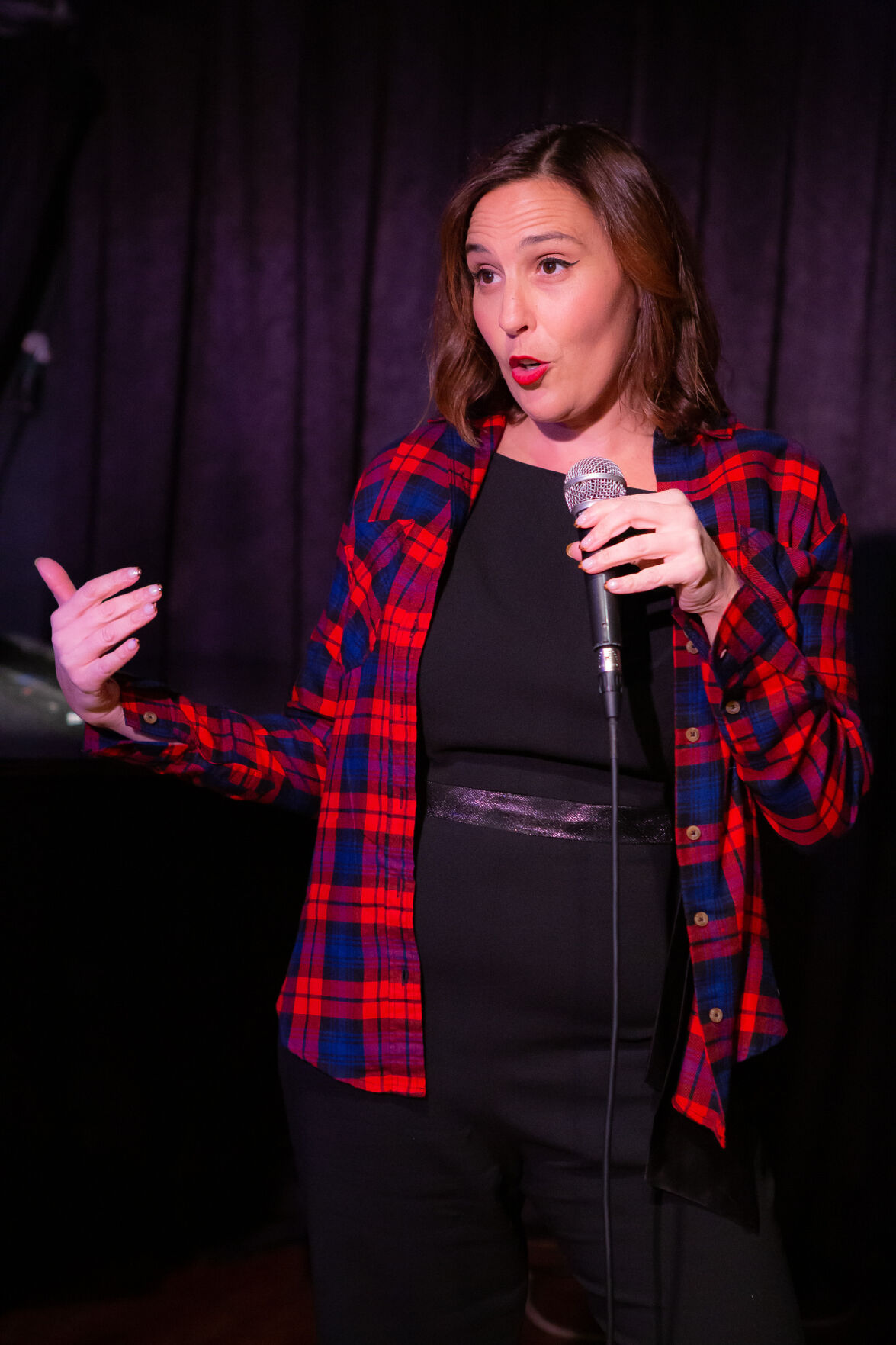 Writer, actor and musician Melanie Greenberg tells how she spent her adolescence and early adulthood moving through the full spectrum of American institutions her one-woman show, "The Elephant in the Room."

LENOX — Picture this: a 10-foot, 10,000-plus pound elephant hanging around a circus-themed party in the backyard of an affluent Los Angeles neighborhood.

What: The Elephant in the Room

For Melanie Greenberg, who grew up on the Upper East Side of New York, the image not only serves as a symbol she likens to how out of place she felt growing up and her existential teen angst, but it is also an actual detail from the story of her life.

Although she won’t be carting an actual elephant with her, Greenberg, a new resident of Great Barrington, is bringing her story to life on the stage at the Apple Tree Inn on Friday evenings. Narrated through the context of a psychedelic ayahuasca trip, the one-woman musical “The Elephant in the Room” takes the audience through poignant moments of Greenberg’s life, all while paying tribute to the show tunes that helped her survive her upbringing.

“I have a wild backstory: I ran away from home at 15 years old. I ended up in a family of born-agains. I got sent away to various institutions,” said Greenberg. “I took the events of my life and what I really did was rewrote them in the way I wanted to tell them. I took every chapter of my show and I found some Broadway musical that I love, to tip my hat to, and sort of reimagined that chapter of my life as a musical in that way.”

From the psych ward to a cult-like “therapeutic” boarding school for troubled youth to the Ivy League to rehab, Greenberg spent her adolescence and early adulthood moving through the full spectrum of American institutions, all while trying to make sense of a fraught relationship with her mother.

Among the moments of her life she reimagined, Greenberg said she considered the perspective of the doctor from the psych ward and reimagined her as Miss Hannigan from the musical “Annie.”

Sip inventive martinis while listening to a troubadour rocker at The Ostrich Room, a modern-day speakeasy

“In my mind, I’m always singing a song."

By marrying trauma with music and comedy, "The Elephant In The Room" acts as the narrator’s invitation to the audience to reshape and reclaim their own stories. The process of creating this work has only served to deepen Melanie’s belief that sharing stories is the key to understanding ourselves and others.

In my mind, I’m always singing a song, so why not tell my story in the way that feels like the fantasy of how I want to be living, which is in a fabulous dress singing a song by a piano,” she said. “That’s not everyone’s version, but for me, that’s the fantasy.”

Greenberg, who has been writing and performing her entire life, holds a master’s degree in fine arts from The New School in New York City.

She was the creator and host of the YouTube channel, Kill Switch. She also wrote, produced and starred in a comedy TV pilot about a middle-aged mom who attempts to become a YouTuber in order to gain the respect of her children.

"The Elephant in the Room," however, serves as her first-time performance piece she’s written as well as her first autobiographical piece.

The process of writing the show provided an opportunity for Greenberg to examine her own narrative from her own perspective as well as that of others’.

It won the award for Best Comedy at the 2021 United Solo Festival.

The show is directed by Joanie Schultz with Bill Zeffiro as musical director. As a result of the COVID-19 pandemic, Greenberg was able to reconnect with Schultz, who was a childhood best friend.

“I ran away from home when I was 15 years old to be with my childhood best friend, who was at the time my soulmate, the way your 15-year-old best friend is. The series of events happened and I got sent away and never saw her again,” said Greenberg. “I reconnected with her during the pandemic and discovered that she was a theater director and I remember getting chills and wondered to myself: ‘is she going to end up directing my show?’ And she did.”

Storytelling has had such a powerful and healing impact on Greenberg’s life that she is also currently in the process of establishing a Berkshires-based nonprofit called. “The Story Sanctuary.” With the nonprofit, she hopes that individuals and communities in conflict can come together to build empathy and self-awareness through storytelling.

A believer in the healing power of storytelling, Greenberg works with a New York City-based nonprofit Open Doors, a project of the Center for Transformative Action on Roosevelt Island. Inspired by the stories she has heard, she decided to tell her own harrowing and unconventional story.

“When we share stories, we start to see this thread of humanity that connects us all. When I listen to the stories of these guys [from Open Doors,] there’s something in the humanity of the story or the feelings that they experienced that I can connect to. There’s something universal,” she said. “For me, that’s what I love about storytelling. It connects us with each other.”