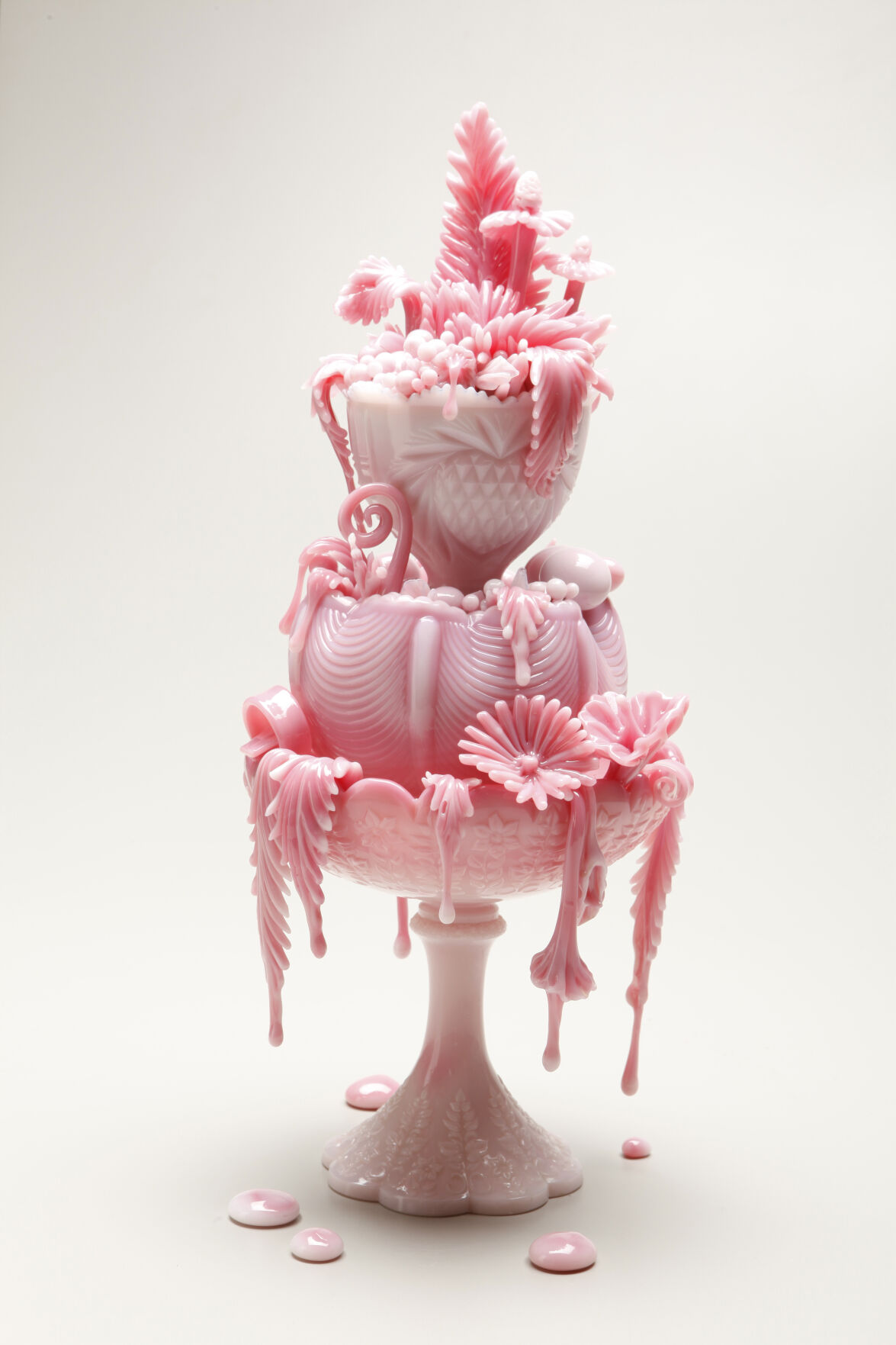 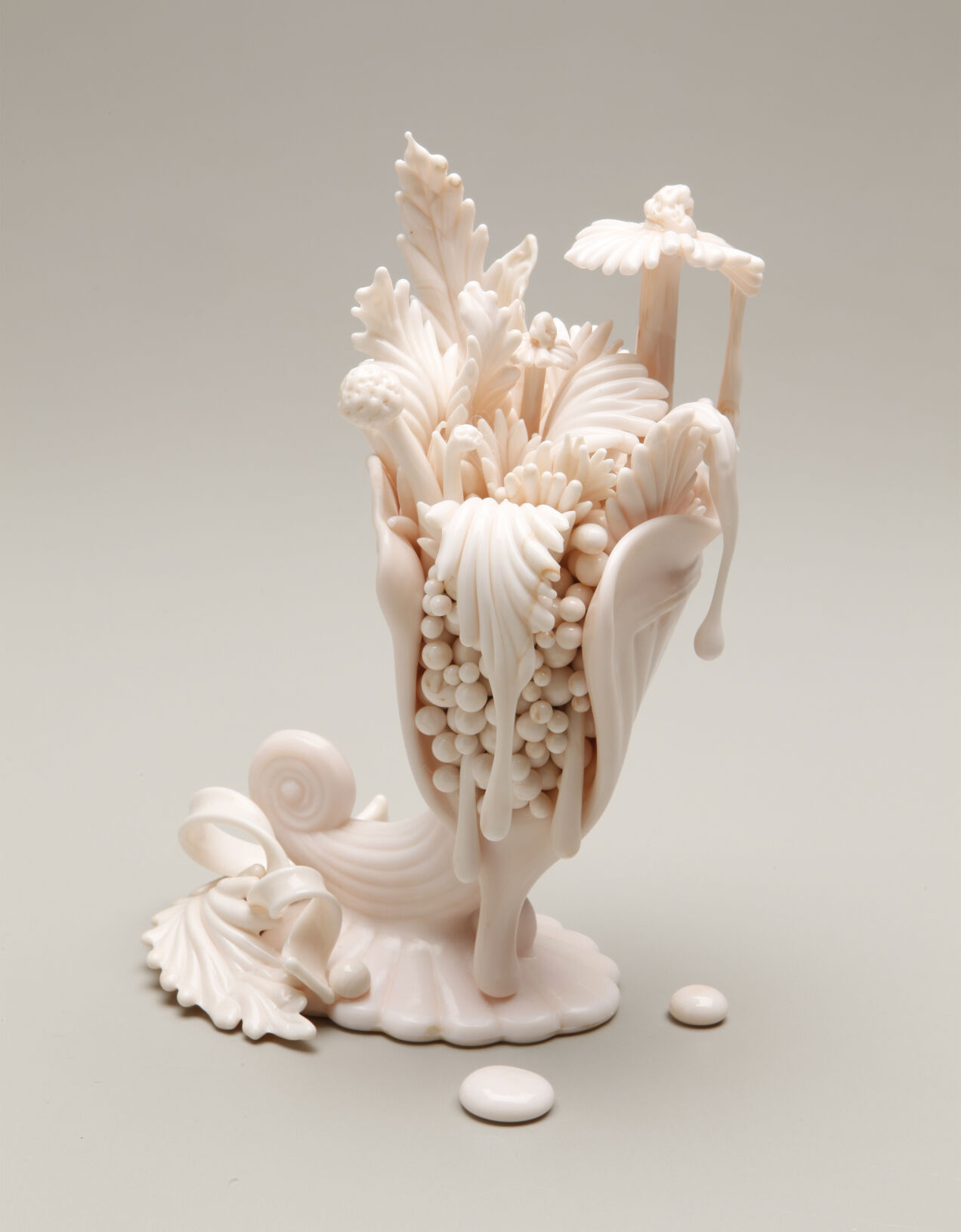 Amber Cowan’s “Cornucopia in Shell” is on view as part of “Melting Point” at Ferrin Contemporary in North Adams. 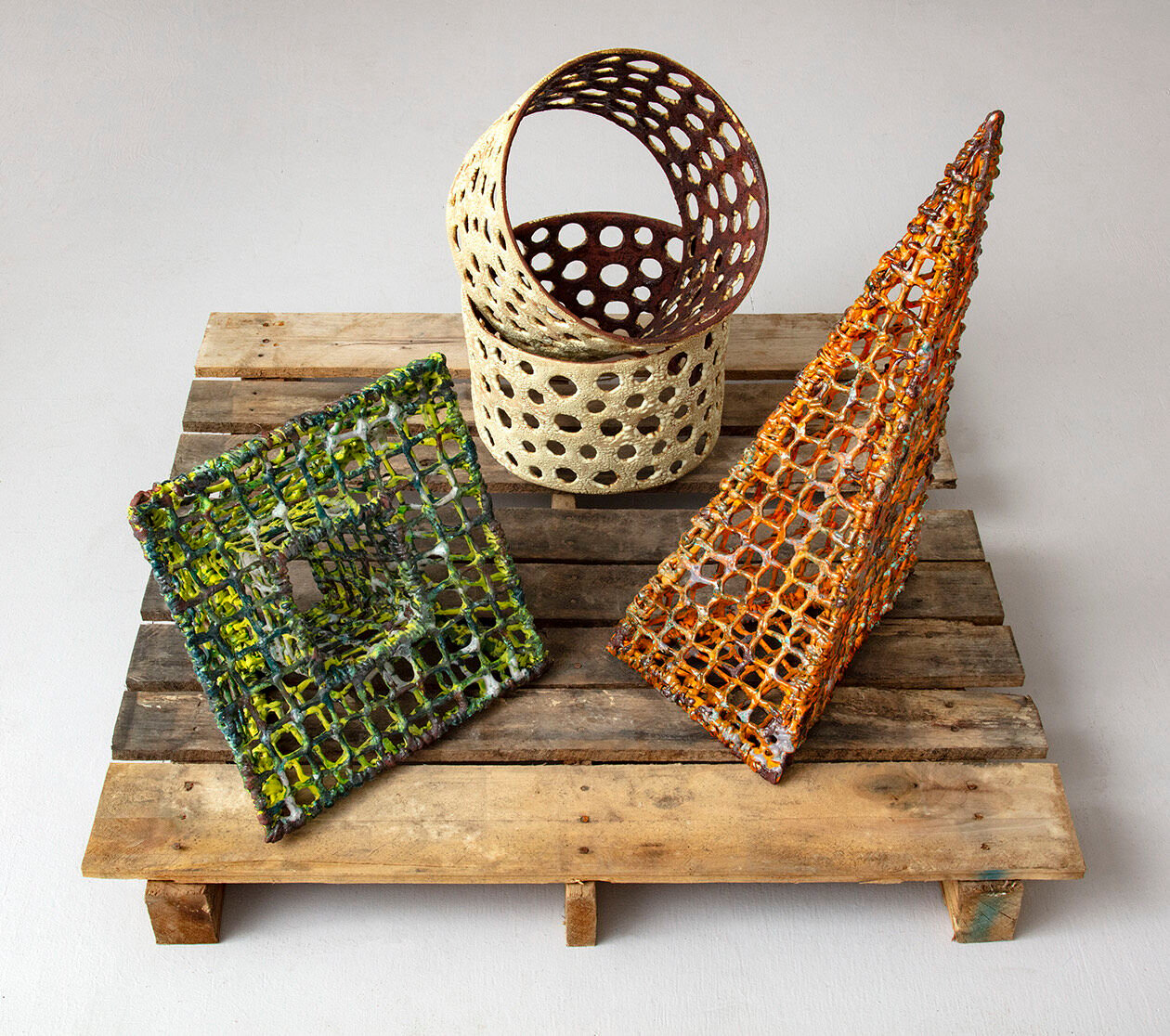 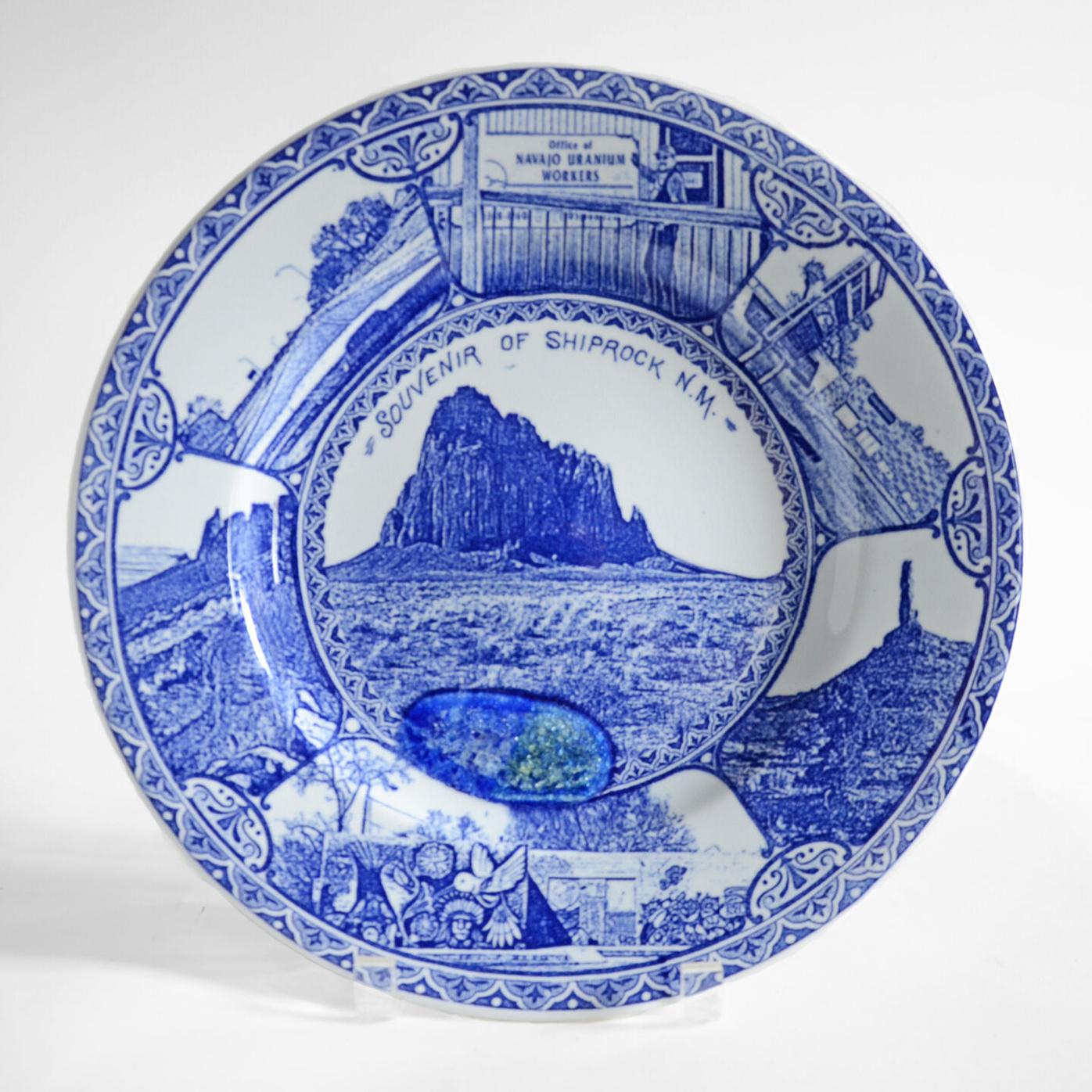 Pale pink ferns drip down the side of a cornucopia, pooling in glass puddles besides the melting statue.

Amber Cowan’s “Cornucopia in Shell” melts silently on a shelf in Ferrin Contemporary’s North Adams gallery. In New York City, at the Heller Gallery, her piece, “Fountain in Rosalene,” silently sits, its bright pink ferns and flowers drip and pool in the same manner. Although the pieces are hundreds of miles apart, they are part of the same show, “Melting Point,” a collaboration between Ferrin Contemporary and the Heller Gallery, featuring nearly 100 works by 22 artists in the two locations.

“This show came out of COVID,” Leslie Ferrin, director and founder of Ferrin Contemporary, said during a recent interview. “Doug and Katya Heller came up last summer. We’ve known them forever, from art fairs. They’ve shown Tom Patti, who I first met when I was a student learning to blow glass.”

The gallerists talked about renting the then empty space next to Ferrin’s gallery in Building 13 on the Massachusetts Museum of Contemporary Art campus, but then learned it had been leased by the Eckert Fine Art Gallery. It was then that Ferrin and the Hellers began to talk about an art exhibit that could be presented in both New York City and North Adams. They came up with a concept, melting point.

The melting point, as explained in the gallery text, is the degree when solid becomes soft, eventually becoming liquid and a boiling point is reached.

It’s the point where glaze melts, clay and glass soften — techniques used by and central to the practice of the artists in the exhibition. And for many of them, also a metaphor used to examine societal and environmental issues: social injustice, climate change and politics.

“It still wasn’t clear if we’d be able to open fully in the fall, so we decided to wait,” Ferrin said, explaining the months-long process of putting together the show. The Heller Gallery opened its show June 24. Ferrin Contemporary officially opens its show with a reception, 3 to 5 p.m., Saturday, July 24.

The show, Ferrin said, features a diverse group of artists, from emerging to established, in a variety of mediums. There are artists, such as Tom Patti (of Pittsfield) and Sydney Cash, both glass artists with international followings, and younger artists, like Lauren Mabry, who are mid-career.

“Sally Silberberg, who lives in Plainfield, was way ahead of the curve. The work you see happening now, she was doing 40 years ago. There just wasn’t a place to show it then. Fine art was on the walls, sculpture was made of bronze and stone. In the 1980s, ceramic was craft; a utility,” Ferrin said, pointing out Silberberg’s Blue Striae, a rock-like sculpture, made of fragile porcelain.

Artist Courtney Leonard, a member of the Shinnecock Nation on Long Island, creates ceramic sculptures that explore historical ties to water and whale, imposed law, and a current relationship of material sustainability. In Schrimshaw Study No. 3, Leonard recreates a scrimshaw — a carved and adorned whale tooth — in porcelain, detailed with images of whales. Other works, recreate fishing nets, are formed in ceramic.

“She’s very aware of the rising sea levels,” Ferrin says of the work, which relates directly to the practices, culture and heritage of the Shinnecock Nation.

Cowan’s glasswork uses, recycles and repurposes glass cullet sourced from the “dustbin of American design” found at flea markets, antique stores and tag sales. She reshapes broken bits and whole pieces. Sometimes the pieces are reshaped into new works, other times, the forms are melted and twisted, retaining some semblance of their original shape.

“She reshapes it; makes it new,” Ferrin said.

Artist Paul Scott tackles present-day issues in the form of souvenir plates. Scott creates new works in the style of antique and contemporary souvenirs, correcting the narratives on them with new drawings.

At first blush the work appears innocent, to be filled with images of local landmarks of interest, but on closer inspection, Scott’s work tells deeper tales. On a blue and white plate, a supposed souvenir from Shiprock, N.M., he tells in images, the story of the exploitation of the Navajo Nation, of uranium poisoning suffered by indigenous miners.

On view: Through Sept. 5

Gallery hours: 11 a.m. to 5 p.m., Thursday through Saturday and by appointment.

NORTH ADAMS — A day spent exploring in the Sol LeWitt retrospective at the Massachusetts Museum of Contemporary Art has inspired a new show by ceramicist Peter Pincus. "Art in the Age of …

Forefront 2020: Putting a spotlight on women in the visual arts

Update: Forefront 2020 and the individual gallery openings scheduled for March 20 have been postponed, with a date yet to be announced.  In 2020 — the "Year of the Woman" — is there still a need to shine a spotlight on women artists? The answer is, "Yes," according to a joint investigation ...

For Kurt Weiser, his art is anything but black and white

NORTH ADAMS — Kurt Weiser is no stranger to insomnia. He's also not one to complain about sleepless nights, as that is when he's most productive."It's hard to sleep when there's too much to …