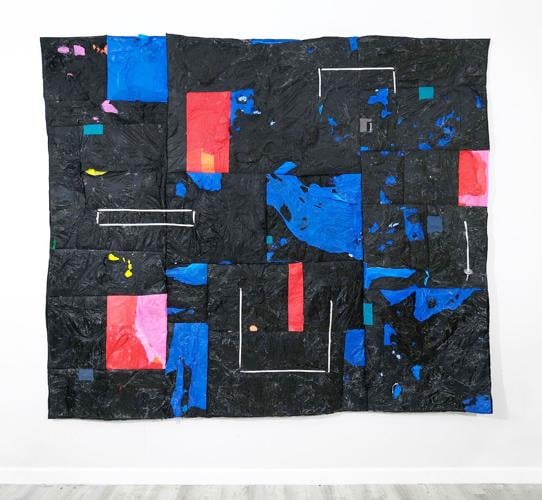 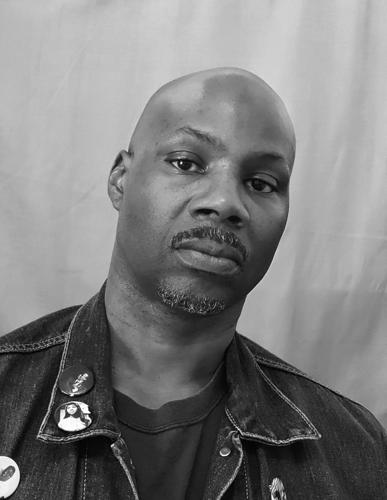 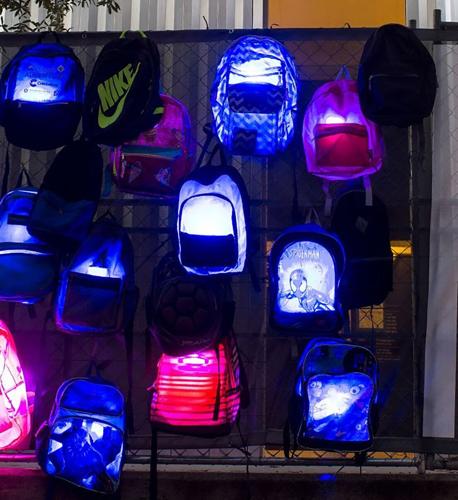 MCLA Art Lab artist-in-residence Nathaniel Donnett created an art piece in Houston that incorporated backpacks collected from local students. His current project collected backpacks for a work that will be seen at MCLA Gallery 51 in October.

NORTH ADAMS — What may look like a pile of old used backpacks is the makings of an art and social activism project for Nathaniel Donnett, who is giving these vessels a new life in his studio space at the MCLA Artist Lab.

An MCLA Artist Lab artist-in-residence (January through May), Donnett collected about 50 backpacks from students at the Massachusetts College of Liberal Arts, Berkshire Arts & Technology Charter Public School, in Adams, and Pine Cobble School, in Williamstown, exchanging their old ones with new backpacks. The resulting work will be seen at MCLA Gallery 51, in a solo show, running Oct. 7 through Dec. 16.

"These will be torn apart and then they'll be stitched back together in the style of quilting and collage," he said, sitting near his sewing machine during a recent interview. He'll add other materials to the piece, which he says speaks to the idea of how we see time, history and space. "It's fragmented, based off a memory."

Donnett, a multi-disciplinary cultural practitioner who lives and works in Houston, was recently named a 2022 Guggenheim Fellow by the John Simon Guggenheim Memorial Foundation. A graduate of Texas Southern University and Yale School of Art, he's the received a Dean’s Critical Practice Research Grant and an Art and Social Justice Initiative Grant at Yale, a Houston Arts Alliance Grant, and an Idea Fund/Andy Warhol Foundation Grant.

"I was really taken with how he approaches his practice in terms of research," said Erica Wall, executive director of MCLA Arts & Culture (previously the Berkshire Cultural Resource Center) and MCLA Gallery 51, which oversees the residency program. “[The backpack exchange project is] a beautiful culmination of artistic practice, and I think, more recently, the social activism that's been going on, particularly in light of what has surfaced with the pandemic and racial unrest, and I think also a culture of a transparency around the way artists conduct research in their practice.”

In 2020, Donnett created a similar backpack project entitled "Acknowledgement: The Historic Polyrhythm of Being(s)" on a large fence outside the Contemporary Arts Museum Houston, using backpacks from an exchange with students.

At night, the backpacks would illuminate in a blue glow and were lighting up in Morse code, reciting a line from a John Coltrane song, “Acknowledgement,” an excerpt from James Baldwin essay, "The Uses of the Blues,” and part of Solange's song "Mad."

"Basically, I was composing a song through light as well," Donnett said.

The piece was about language and education, he said, and "it was focused on three historical Black neighborhoods, and trying to show some of the history and also show a different form of resistance protest ... that there are many ways to engage in that."

Text was printed on the fence but you had to know the slang from those communities to understand it, he said, which made it like a type of code.

The pieces he is working on now at the MCLA Artist Lab are multi-part. When he exchanged backpacks with students, he also photographed and interviewed them. "I'm trying to give like, a little moment for them to just think about themselves without all the other stuff; to say whatever you want to say."

Using those interviews, he's creating an experimental soundscape, and photos will be incorporated into a yearbook that he will print and digitize.

He chooses backpacks for a reason.

"Their history is embedded inside and on the backpack in terms of their body, sweat, hair, you know, dirt and whatever. And they released some of those things," he said. "But they never really released it, because it's part of their history ... Then we give them new backpacks, which allows them to extend their history or create new history with new things, and kind of redo the cycle. That's what exchanges is."