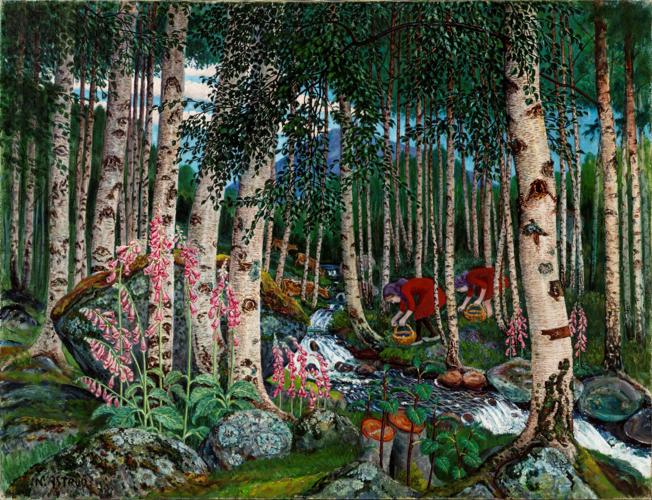 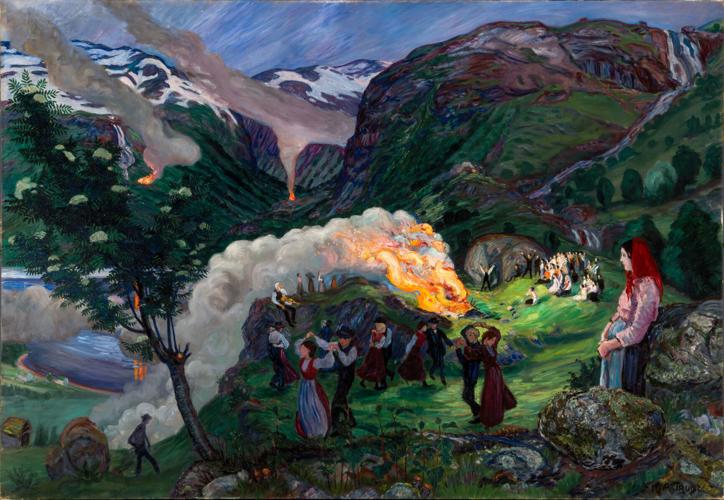 WILLIAMSTOWN — High in the mountains of western Norway, in Jølster, a woman looks out across the valley as plumes of smoke rise from the Midsummer's Eve bonfires. The woman looks on, as others dance; tell stories; dance to the music of the Hardanger fiddle.

Below her is a celebration of the halfway point of the growing season; of fertility; of the day with the longest daylight. In the distance, a storyteller casts a shadow reminiscent of a troll. Below her, also, is a pagan festival spurned by pietistic Lutherans of Norway; the traditional music of the Hardanger fiddle banned from churches and called "the devil's music" until 1923.

The woman stands above, on a metaphorical precipice, between two worlds — the old and the new. It is here that many of Nikolai Astrup's most stunning works exist, between the old and the new worlds that he witnessed during his lifetime and that his work helped to define.

His work is the subject of of "Nikolai Astrup: Visions of Norway," on view at the Sterling and Francine Clark Art Institute through Sept. 19. This is the first exhibition of his work in North America.

"Astrup was multi-talented. He was a painter, a printmaker, a farmer, a horticulturalist and a conservationist. He also lived through independence from Sweden and the establishment of a new nation, Norway, which took place in 1905. He, therefore, shared with [Henrik] Ibsen and [Edvard] Greig the desire to forge a new national cultural language — music, literature, visual arts and architecture. This new language did not include Norwegian peasants in their costumes gazing at mountains and fjords but, rather, determined a new visual language that capture the essence of Norwegianess ...," said MaryAnne Stevens, guest curator, independent scholar and former director of academic affairs at the Royal Academy in London, during a press walkthrough of the show over Zoom.

Astrup, she said, is one of Norway's most beloved artists, yet he is almost unknown outside of his home country. The reason, Stevens said, is that almost all of his artworks are held in public and private collections in Norway.

The show at The Clark, was supposed to arrive last summer, but was delayed by the coronavirus pandemic.

Astrup's painting of Midsummer's Eve bonfires are just one part of his body of work, a small part that combines a love of tradition and folklore. For the most part, his focus was on Norwegian life, as he saw it on his family homestead in JØlster, where he was born and later returned to, to paint and raise his own family. The son of a Lutheran minister, he was one of 14 children.

It is here in Jølster, after years of traveling and studying art, that he would paint the family parsonage, homestead and farm; the nearby Jølstravatn lake, and the  snowcapped mountains above. It is here, that he painted his surroundings in vibrant greens and reds, dark blues and lush purples. He would paint his wife, Engel, picking rhubarb in the garden; birthday parties on the farm; millers heading out to work; cows grazing on the hillside; children picking foxgloves in the forest.

He created woodblock prints, based on his paintings and made smaller prints, that he sometimes later painted into. His most successful woodblock, "Foxgloves," based on a painting of the same name, was his largest and comprised of several woodblocks that allowed him to layer the work and colors.

The exhibition at The Clark is ambitious and beautiful. At the start of the exhibit, lush landscapes, of enormous size, sit side-by-side with vivid oils of his family parsonage and neighboring homesteads and barns. Ethereal in quality, photographs of the works fail to compare to the originals which have a settling depth and dimension to them, as if one might be able to climb through the frame and into the world inside.

As the show progresses, woodblocks, prints and paintings are displayed, in a most academic fashion. Here, the show stumbles, albeit briefly, as walls are filled with multiple prints made from a single woodcut — the differences in some are so slight that an untrained eye can easily miss the differences. It is apparent, at this point, that there are academic hands that have helped shape this show.

But, the exhibit finishes strong, when the show returns its focus to Astrup's work and leaves his process in the background. It is in the last gallery, filled with Midsummer's Eve bonfires and willow trees that shapeshift in the mind's eye, that we see Astrup defining what it means to be Norwegian — to live in a modern world shaped by the folklore and traditions of the past.

What: "Nikolai Astrup: Visions of Norway"

'Ground/work': Outdoor sculpture exhibition challenges you to see artwork in a new light

When the pandemic struck, Williams grads Izzy Lee and Jared Quinton returned to Williamstown and opened a pop-up gallery

WILLIAMSTOWN — A painting of two raw chicken breasts on a light blue cutting board hangs in the front room of Poker Flats, a pop-up gallery on…