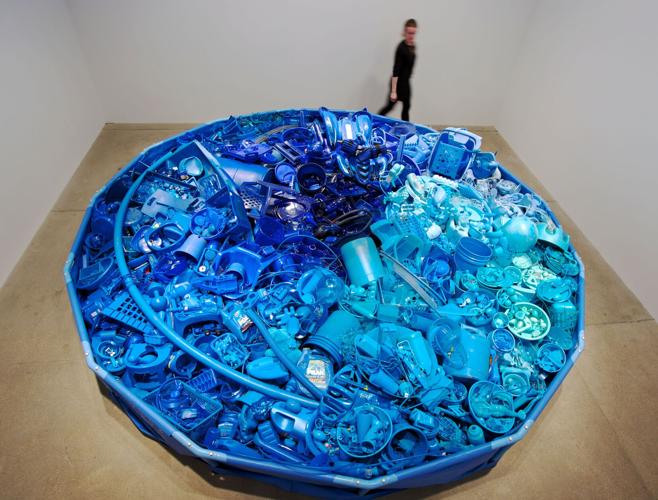 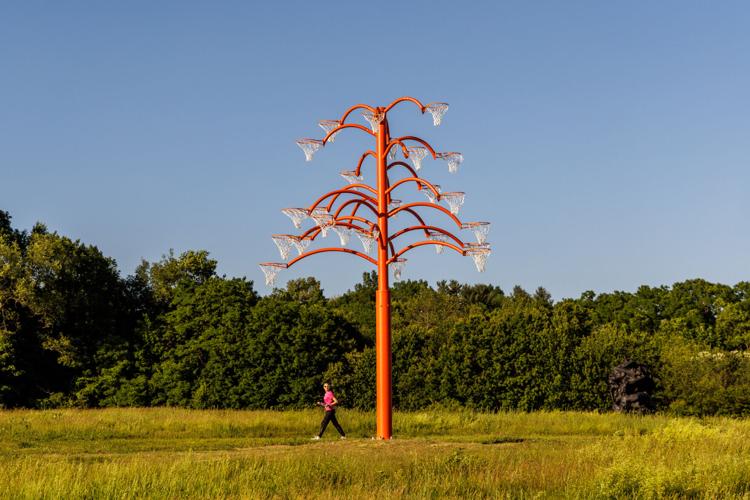 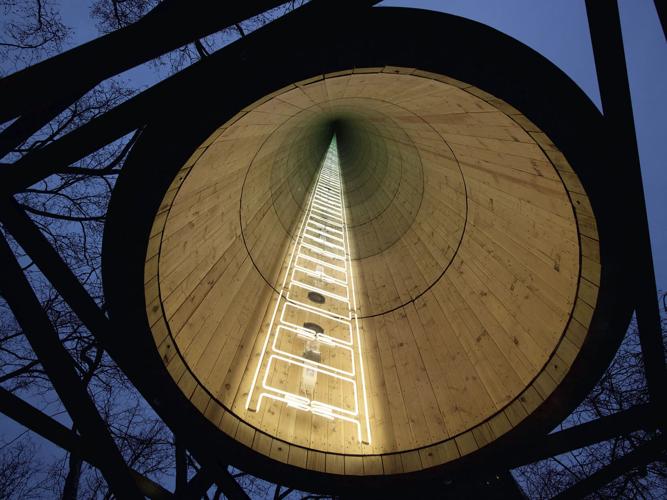 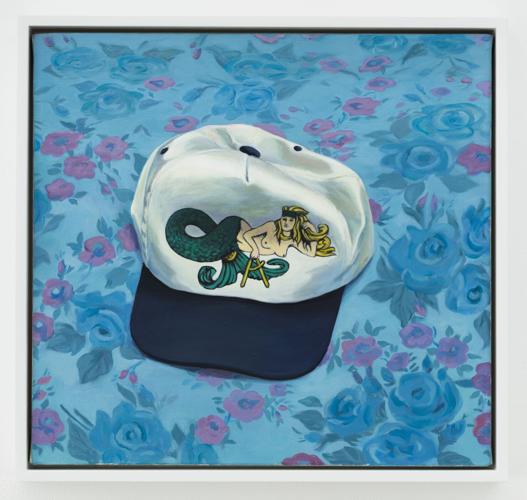 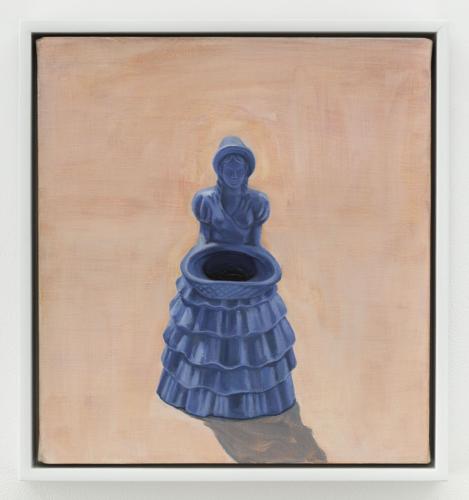 GHENT, N.Y. — At the expansive Art Omi Sculpture & Architecture Park, not all the artworks sit out in the rolling fields and lakeside woodland.

So many blue objects reference boys and males, but its strongest connection is water.

Inside the Benenson Center’s Newmark Gallery, a 15-foot-wide blue backyard swimming pool is filled, not with water, but with thousands of found plastic artifacts, organized by graduated shades of blue. The centerpiece of “Flood,” a new exhibit by artist Portia Munson, “Reflecting Pool” (2013) displays the detritus of the plastic era.

“They’re all things I find at the side of the road, free piles after yard sales, thrift shops, places like that,” Munson said by phone from her home Catskill, N.Y.. “I’m always gathering the cast-offs of the culture, I’m fascinated by what it says about who we all are.”

“So many blue objects reference boys and males, but its strongest connection is water,” she said. “Just the sinisterness of making so many plastic things that are water-related, [yet have] a devastating effect on our water in all different ways.”

She has created numerous installations using the colors pink, blue and green. “Part of what I’m doing is researching what the color means in terms of marketing, what they are trying to sell.”

What: Exhibit openings for works by Portia Munson, Alexandre Arrechea and Ivan Navarro.

“I love painting, because of how mediative it is. But I’m not able to say everything I want to say with a painting. Larger installations are a real social commentary on our waste and consumerism. Sometimes I need to make these big, immersive installations to express what I’m observing and feeling. It’s harder to get that across in a painting, they’re quieter and more mysterious. With “Reflecting Pool,” it would be hard not to come away with some kind of environmental understanding.”

“I like to imagine there will one day be an end to plastic and we will no longer be making it,” she added hopefully.

“It’s a brand new piece,” she said. “I was collecting female forms and there’s quite a few Mary and mermaid and Southern Belle types. Those three stereotypes in blue figure strongly. You’ll see the Virgin Mary in this arched form, and there are hanging shelves with little figurines on them.

“I’m really enjoying delving into this color in a female realm, because my exploration of blue has been first thinking about boys, and then in relation to water, and now in terms of how women are represented as blue.”

Another installation on exhibit, “Nude” (2021), is uncharacteristically almost devoid of color. Ceramic female figures cover a life-size mannequin on a pedestal, most wearing old-fashioned clothing, and each tied up in pantyhose.

“They’re all found objects,” Munson said. “In a sense, they’re instructional. In your grandmother’s house, in a store, you’re seeing these somewhat narrow representations of what it means to be a woman. I put them in pantyhose which, to our generation, represented a certain kind of standard or expectation.”

“It’s very toned down,” she added. “The mannequin has white, Caucasian flesh tone. Many figurines wear a dress which has a little bit of color, but when you put them in pantyhose, they become more monochromatic.”

A dozen works in oils represent her first love, painting. “I’ve always been a painter, even before high school,” she said. “I set up a still life and then paint the object the size they actually are. I’m thinking, how can I best look at and talk about this incredible object?”

Her paintings tell complex stories. A baseball hat on a floral background sports a mermaid image. Another mermaid sits on a ceramic dish encircled by potatoes. String tethers a pink girl to a container of water, as a pink rabbit looks on.

“So much of my work right now is bound, tying and binding figurines. That’s a much earlier painting where I was doing that too. I think about how we’re bound by cultural expectations and ideas about who we are and who we should be.”

At Cooper Union art school she was encouraged to take classes in a variety of media.

“That expanded my idea of what I could make. I started working in whatever medium fit the idea I wanted to convey.”

“My installations definitely get a lot of attention compared to my paintings, [which] are small and more quiet. I’m about to open a show in Hudson [N.Y.], and then Art Omi, and then a solo show at my New York City gallery PPOW. I’m excited [to have] my paintings be more visible.”

The opening reception for “Flood” on June 25 also celebrates two recent outdoor installations at Art Omi. “Orange Functional” by Cuban sculptor Alexandre Arrechea is a tree-like form with two dozen bare branches, each culminating in a functioning basketball hoop. Visitors can bring basketballs or borrow them onsite and invent ways of engaging with the sculpture.

“Much of [Arrechea's] work has been about public spaces where [people] meet and gather, such as a basketball court,” said Sara O’Keeffe, senior curator  of the Sculpture & Architecture Park, during a phone interview. “He has been thinking about trees that sprout into basketball hoops, often at very unconventional heights. This has hoops up to 20 feet high, it looms above you.”

“By taking forms that are very familiar and altering them in unexpected ways, he forces us to rethink the rules of engagement.”

As basketballs fall to the grass, they start to look like oranges, she noted.

“We’ve been trying it out,” she added, “and I’m happy to report it is quite a fun game.”

“This Land Is Your Land” (2014) by Chilean artist Ivan Navarro consists of three unassuming water towers, so ubiquitous in New York City. Close to the Benenson Center, at first sight they appear functional.

“We’re all thinking ecology, the importance of water, who has access to it, and who is protecting it,” O’Keeffe explained.

Walk underneath them, however, and look up to see repeating mirrored neon lights inside each structure that invoke immigrant struggle and hope.

“It’s like looking at infinity,” O’Keeffe said. “In one there’s a neon ladder, perhaps the notion of upward mobility or access. In another, the word “WE” inverts and oscillates with “ME,” the individual and the collective. In the third, there’s a bed [and] rest or respite.”

Taken from Woody Guthrie’s iconic 1940 anthem, the title references troubled historic connections between Chile and the U.S. Under the CIA-supported dictatorship of Pinochet, O’Keeffe said, many Chilean folk singers were inspired by Guthrie, whose music wasn’t allowed there. The ensuing violence spurred a surge in migration.

O’Keeffe joined Art Omi in February 2022. “Part of what drew me to this position is so many of the artists I’ve worked with [previously] are alumni of the Art Omi Artist Residency program,” she said. “There are talks and performance and music and ways into the work across many different disciplines. And a constant turning of what’s on view.”