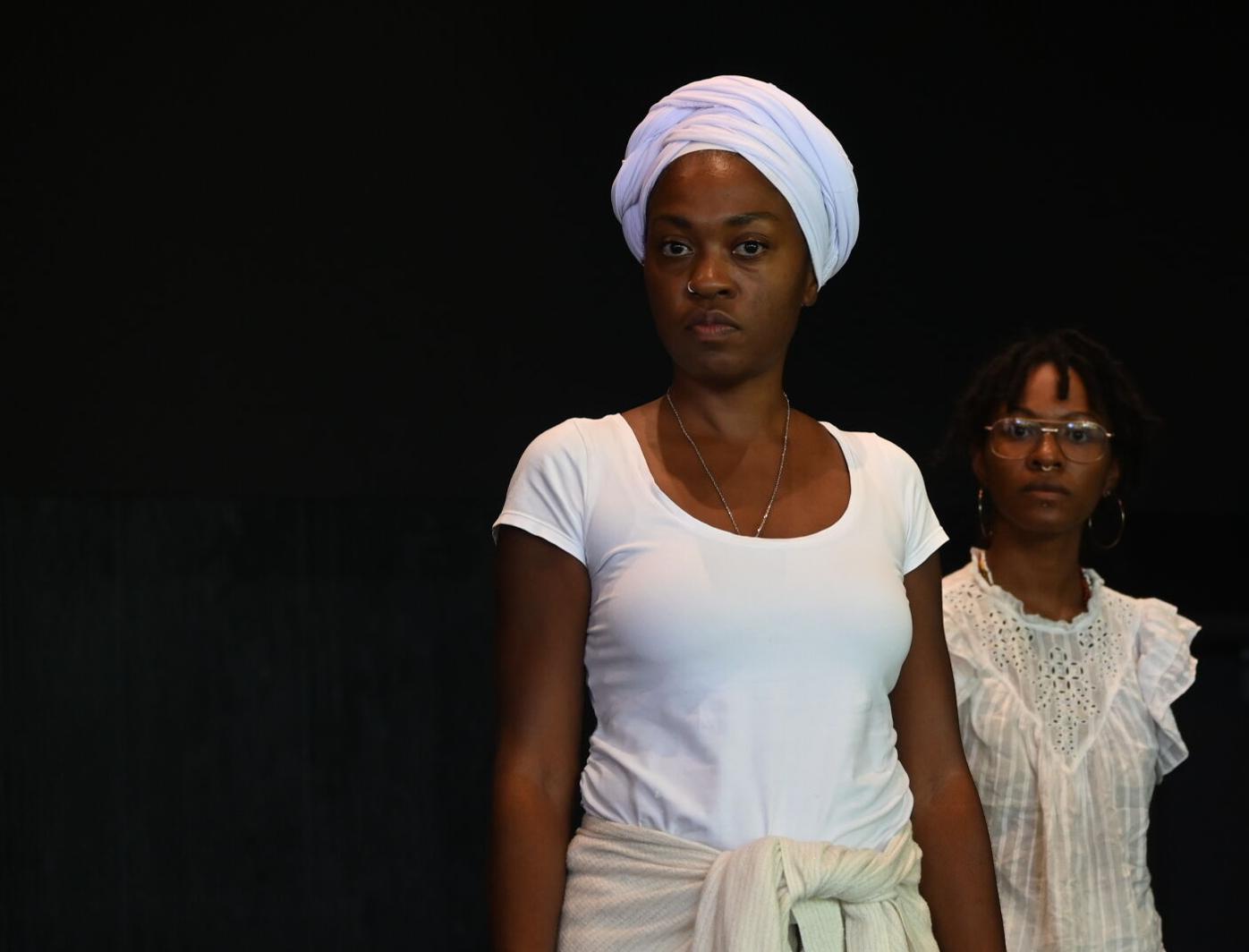 Antoinette Cooper and Nova Scott-James in a scene from "She/Her" at PS21. 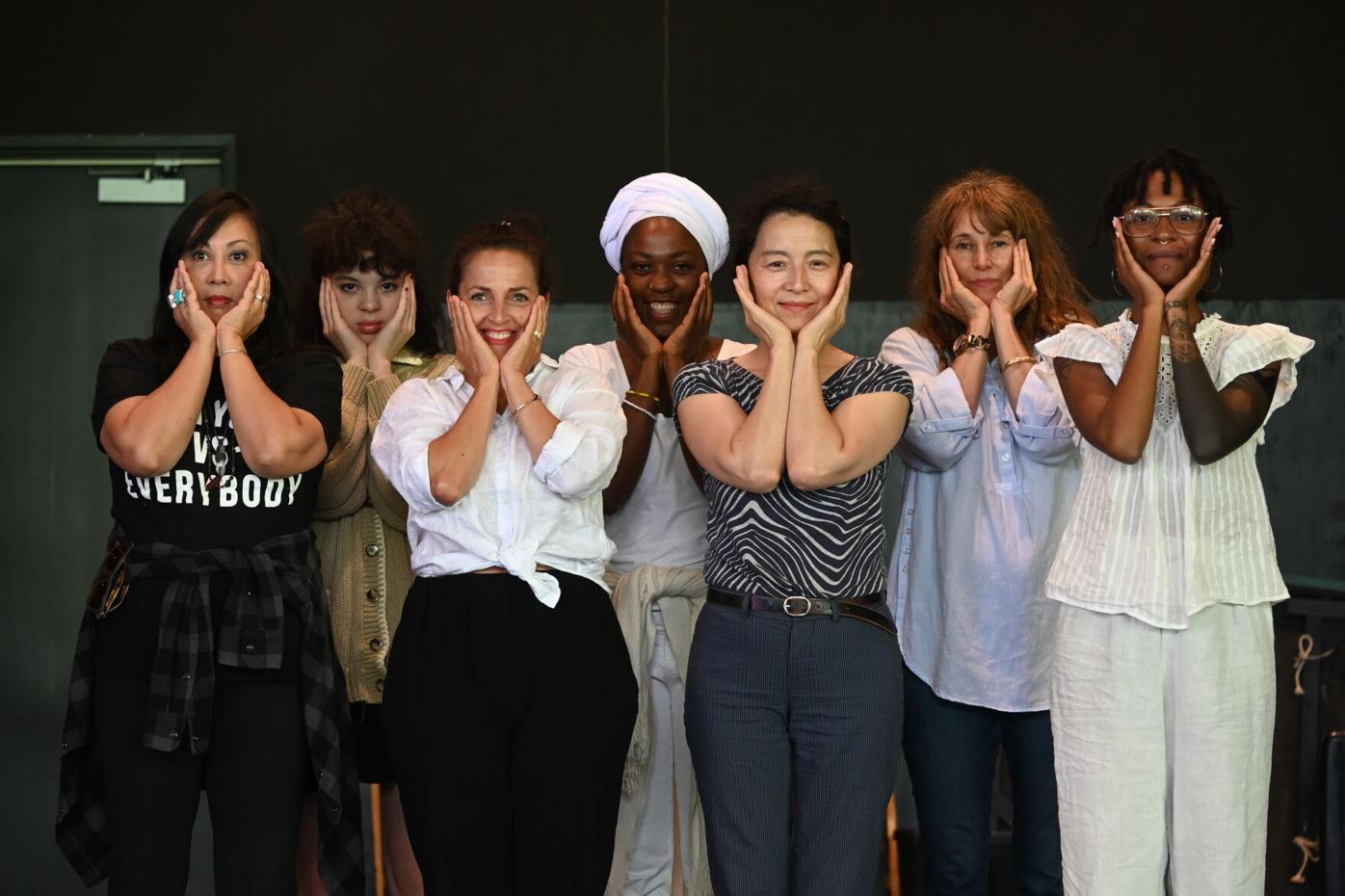 Antoinette Cooper and Nova Scott-James in a scene from "She/Her" at PS21.

Run time: 90 minutes with no intermission.

"She/Her" is a new project of Nicole Ansari, an international creative force who acts, directs, writes and produces in multiple disciplines, all while raising two sons with Scottish actor/husband Brian Cox in New York City and the Hudson Valley. Born and raised in Germany, she also founded Actors Rising, an organization that promotes healing through art.

“I wanted to tell stories of women by women,” Ansari said. “I love the form of monologues, and thought it would be good doing something that tells real stories, like the Moth [a storytelling collective] but in a more artistic way.”

“I wanted to have eight women, including myself,” Ansari said, “because '8' is the sign of infinity, and good timing in terms of show length. And I wanted a spectrum of cultural diversity.”

The group met weekly on Zoom for three months, answering questions and prompts, and writing their responses — “experiences we had in our lives that unite and divide us as women,” Ansari said. “It became very clear in an organic way where this would go.”

“I really love this way of working, where art is created from life and vice versa,” she said.

The multimedia production incorporates music, movement and film Ansari captured of each woman in her habitat. An 8mm filter imbues an old-movie quality “that exemplifies the fragmented nature of memory,” she said.

“I was interested in her background [and] experience working with one of Europe’s top auteurs, Ariane Mnouchkine,” Siyanko said. “A lot of [American] theater is very narrative, they tell you a story. People like Mnouchkine invent so many different forms of theater, it’s three-dimensional to them.”

“For this season, when we didn’t have a powerful feminist stance, it was important to create this kind of work,” she said. Previous PS21 residencies have developed new dance and opera, she said.

“[Ansari] works equally well with professional and non-professional actors,” Siyanko said. “Being part of the community and working with people who are based here is important to us.”

Mother and daughter duo Yibin Li and Liza perform both music and monologues in ""She/Her." Li has worked with Ansari on stage and taught her children violin.

“At 50, I’m struggling with insecurity of how I deal with life,” Li said. “I have a lot of trauma from when I was young.” Attending conservatory in China was “a very suffocating environment,” full of interrogation, mistrust and gossip. “My father always said, ‘zip your mouth, don’t say anything outside this door’.” The anxiety she still lives with is her monologue’s theme.

Li Loube is the thread that ties the monologues together. A student at LaGuardia High School for the Arts in NYC, she exhibits an awareness beyond her years.

Working with her mother, she said, is very weird. “I’m talking about becoming a woman, teenage feelings, growing up,” she said. Opening up in front of her parents “might be a little bit difficult,” she admitted. “But as long as it came from my heart, honestly, I don’t think I can go wrong.”

“It’s going to be real,” she added. “I think people need to hear this.”

Plans are in the works to stage ""She/Her" in New York City this fall.

“There’s a lot of interest in the show,” Ansari said. “I’m building a template that can go to other places. Players can be interchanged with other monologues from local women.

“Every woman has a story to tell.”