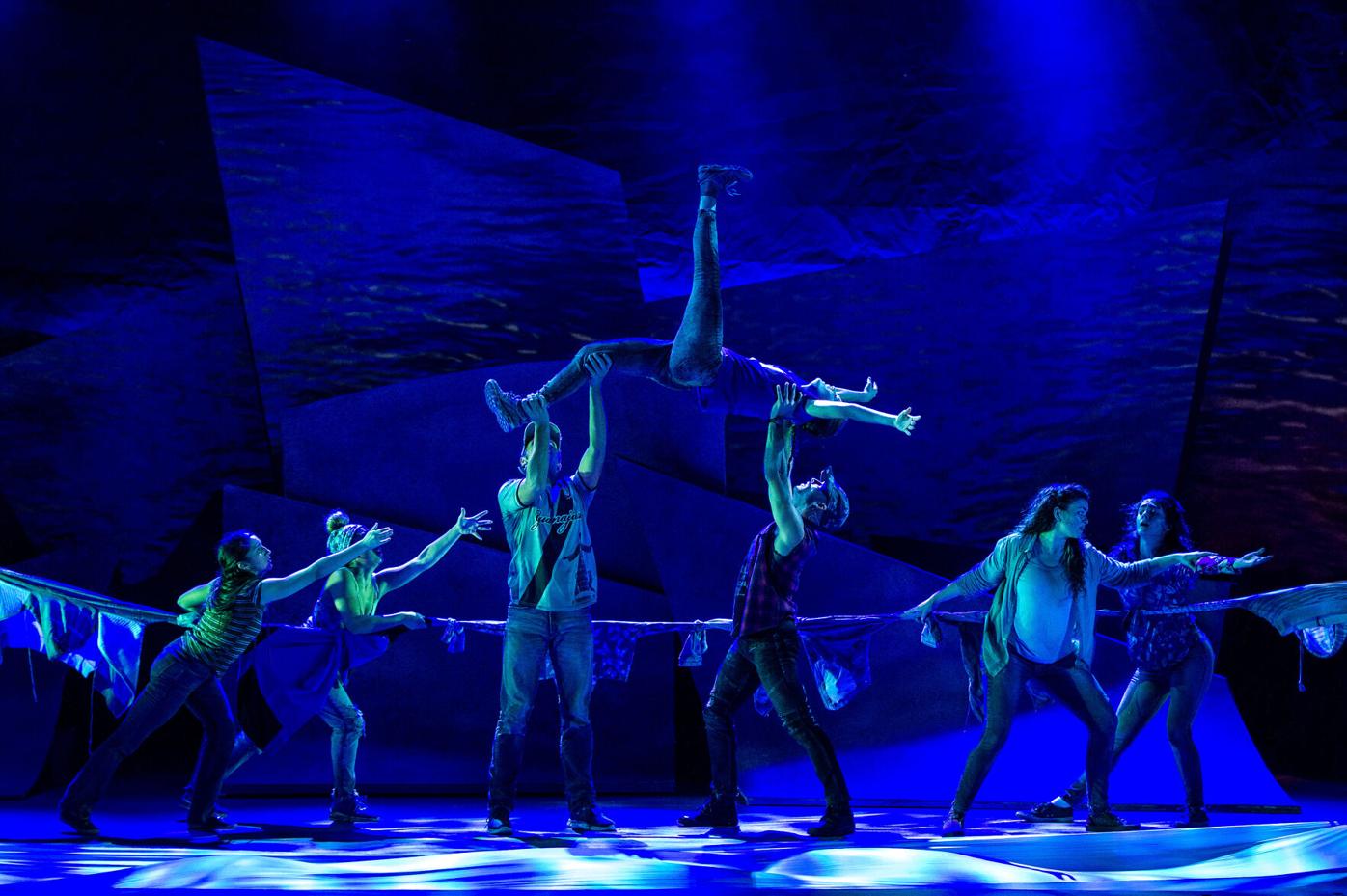 A scene from the world premiere of "A Crossing: A Dance Musical." 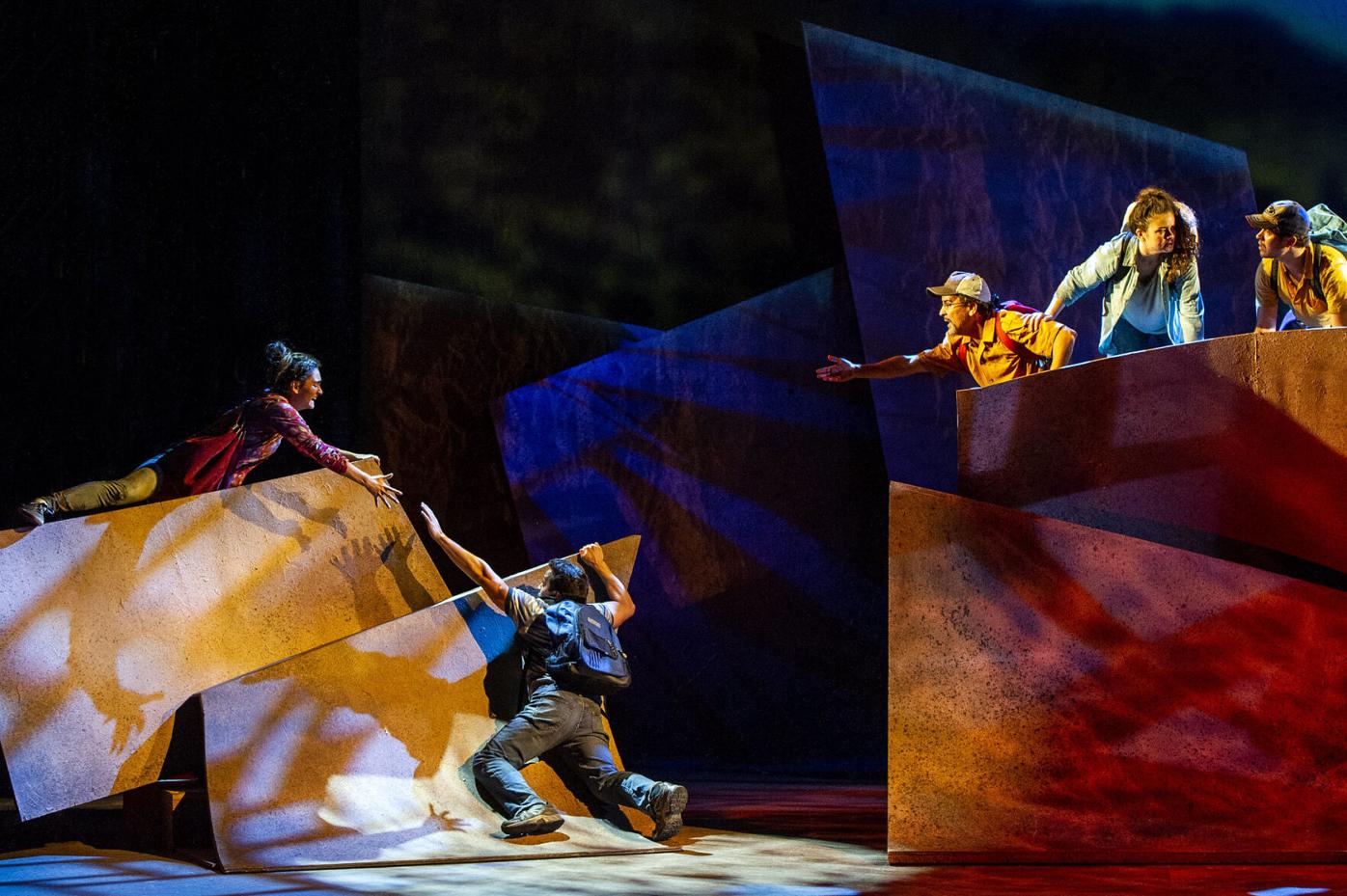 COVID safety protocols: All patrons must provide proof of vaccination or proof of a negative COVID test (PCR test within 72 hours or an antigen test within six hours) and a form of identification before entering the theater. All parties will be required to sign a waiver in order to enter the venue. Complete COVID protocol information is available at barringtonstageco.org

PITTSFIELD — It has taken six years for “A Crossing: A Dance Musical” to make its way from inception to Barrington Stage Company’s Boyd-Quinson Stage. Every ounce of the imaginative work and thought director-choreographer Joshua Bergasse and co-choreographer Alberto Lopez have put into this highly theatrical piece shows in the solidly crafted, expertly performed production that is having its world premiere at BSC’s theater on Union Street.

“A Crossing” also is about hope, faith, determination. And while that might sound familiar and trite, it is much to Bergasse and Lopez’s credit that “A Crossing” neither condescends nor gives in to cloying sentiment.

“A Crossing” begins at what once was the beginning for millions of immigrants and refugees who were ushered into America and processed at the immigration center on Ellis Island, the Statue of Liberty, its torch held high, looking on from its own nearby island across New York Harbor.

It is 1919 as the members of the “A Crossing” ensemble of immigrants make their way cautiously, onto the stage; onto a new world. Three of them, as they dance, swoop down to touch the earth. It is a sequence that will be repeated near the end of “A Crossing” — only then as a gesture of bitter, hard irony. Clearly the times have changed. Change also comes as “And then,” the company members shed their 1919 Eastern European style garments to reveal simple contemporary clothing — shirts, blouses, jeans, pants — underneath and we are moved into the now. Instead of Ellis Island, we are in a village square in a small Mexican town near the border with the United States.

Led by The Coyote (a tall, virile, commanding Omar Nieves), the migrants gather what belongings they have as they get ready for an arduous, perilous trek through rugged mountain, parched desert, across a river that will claim the life of one of them; through an unforgiving rainstorm from which they find refuge in a cave under the protection of the Aztec god of sun, wind and air, Quetzalcoatl (Caleb Marshall-Villarreal, in a truly commanding dance turn) and finally to their final stop — a barn in Texas from which they will disperse and find their own way, but not before an act of violence claims one more life. The incident casts a pall on the survivors. At the same time, the death revives their determination to make a safe, secure life in this America.

Watching over this group — as they do repeatedly with each migrant group — are two spirits, Sol (Andres Quintero) and Luna (Monica Tulia Ramirez), who frame the story meaningfully and powerfully. Quintero and Ramirez are perfectly suited to one another. Their voices are strong, resonant, lyrical. They harmonize perfectly when they are called upon to do so. At times, Quintero conveys a subtle playfulness, a quality that is rare to find within the story’s hard, sober context.

“A Crossing” is very much an ensemble piece. There is talk in one of the early musical numbers about all being one. It’s a matter of survival. Nevertheless, the show’s storyline features four migrants in particular — Giselle (Ashley Perez Flanagan), a fiery, angry, strong-willed 17-year-old who wants revenge against the cartel that “disappeared” her anti-cartel activist parents and is being taken against her will to America for her own safety by her grandfather, Arturo (Carlos L. Encinias), who has lost his daughter and son to the cartel and is determined that his granddaughter not meet the same fate; Karina (Aline Mayagoitia), a young pregnant woman who is fleeing an abusive husband; and Martin (Justin Gregory Lopez), who had crossed the border 15 years earlier, was eventually found by ICE and deported, leaving behind a now 15-year-old son, Ernesto, whom he had been raising alone after his wife died in childbirth. Martin is returning to reunite with Ernesto.

As played by Lopez and Encinias, there is a kind of sweetness and ingenuousness around these two men, especially the good-hearted Martin who keeps with him a harmonica he had been teaching Ernesto to play.

The two women are hard, tough, frustrated, anxious, vulnerable. Mayagoitia’s Karina is distrustful of most people around her, particularly men. For good reasons, she does not like to be touched. She becomes an object of lust to The Coyote who, in one dance sequence, tries to lure her, seduce her with his proud male strutting and prancing until, almost inevitably, this seemingly playful display turns threatening.

The choreography by Bergasse and Lopez is, by turns, dramatic and lyrical; expressive in its influences of classical ballet, Mexican folk dance and contemporary dance. The dancing throughout is muscular and full out. Nothing is held back.

The same can be said of the singing, individually and collectively. These 12 voices blend effectively. The singing is strong, bold, insistent, so much so that at times that power overwhelms the very emotions the music seeks to summon. Indeed, one of the show’s most effective and affecting moments is one of its gentlest — an absolutely lovely duet, “La Patria,” between Martin and Giselle.

All of this is played out within a stunning scenic concept by Beowulf Boritt that involves a series of large, mobile sculpted pieces that look like massive shards of hardened clay, and an equally stunning series of projections by Jeff Sugg that includes a remarkable rainstorm effect and a signature series of spinning wheels within wheels upon which is a stunning array of Aztec glyphs.

The true accomplishment in “A Crossing” is Bergasse, Lopez and the entire company’s commitment to treat all the play’s characters with the humanity and dimension they deserve. Bergasse and Lopez are content to let “A Crossing’s” characters speak for themselves simply by virtue of who they are as human beings — no soap boxes, no speech-making, no debates; just a cleanly, creatively told story about a group of people who want nothing more than a shot at the American dream — the way it once was.