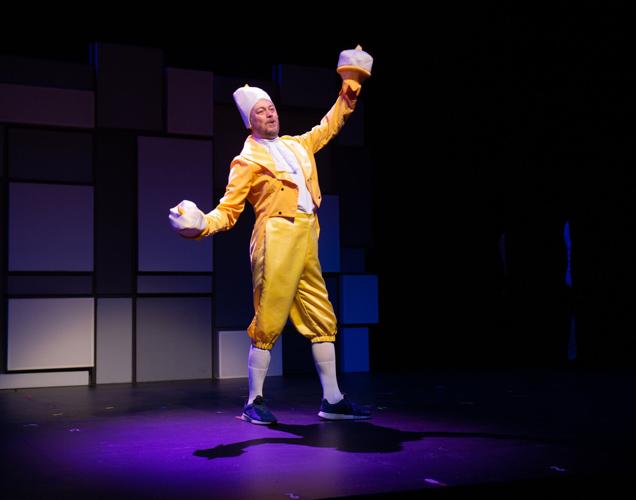 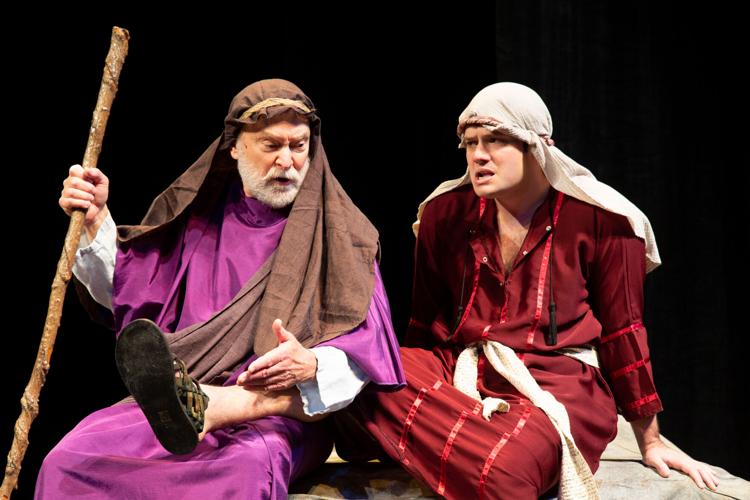 Robert Zukerman as Abraham and Doug Harris as Isaac in "An Awkward Conversation in the Shadow of Mount Moriah." 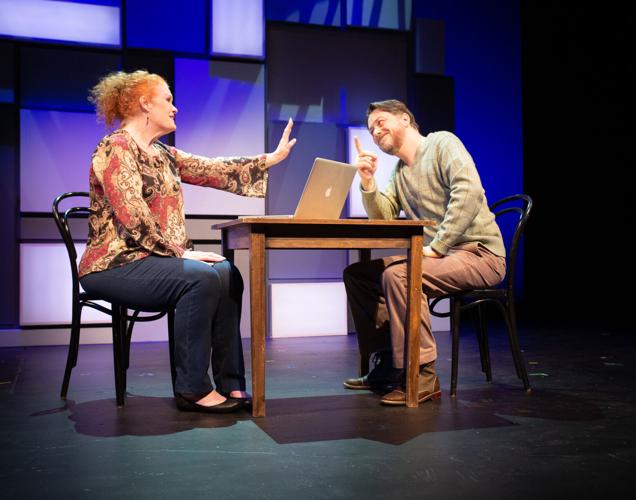 Peggy Pharr Wilson and Matt Neely in "Love Me, Love My Work."

PITTSFIELD — Isaac doesn’t have a great deal to say in Genesis 22 as his father, Abraham, under God’s command, binds him to an altar at the top of a mountain and prepares to sacrifice him as a burnt offering before God intervenes and provides a substitute. Isaac does, however, have a great deal to say in “An Awkward Conversation in the Shadow of Mount Moriah,” playwright John Bavoso’s worthy contribution to Barrington Stage Company’s generally undistinguished 11th annual “10X10 New Play Festival,” which opened over the weekend at BSC’s Boyd-Quinson Stage.

Individuals not eligible to receive a booster until after Feb. 24, guests under 12, or those who need reasonable accommodations due to a medical condition that prevents vaccination must provide a negative COVID-19 antigen test taken within 12 hours of the performance start time. Complete information available online at berkshirestageco.org.

Rabbinical tradition holds that Isaac was in his upper 30s at the time of the binding. As played by a winning Doug Harris, Isaac is a wonderfully articulate, self-possessed young man who is more than a bit confused by his father’s action. He’s not the only one. As the two begin their three-day journey home and begin discussing the implications of what nearly happened to Isaac on the mountaintop, it is evident that the 100-plus-years-old Abraham (played with touching conviction by Robert Zukerman), is still piecing together for himself not only his relationship with God but also his relationship with Isaac.

“You’re my son. Of course I didn’t want to do that to you,” Abraham says to Isaac. “But when God commands you to do something, you do it.

“... Nothing about this — nothing at all about being a father—is simple or easy. I had to show God that I trusted Him, and would do whatever He commands,” Abraham says a bit later. “But I had faith that He never really intended for me to kill you.”

Bavoso has written this anything but awkward “Conversation … “ with wry wit and insight and it is played by Zukerman and Harris with light-hearted skill and understanding.

“An Awkward Conversation … “ not only is about faith and trust, it is about the difficulties of navigating a meaningful, complicated relationship — several relationships, in fact — with openness and honesty.

By chance — call it luck of the draw, if you will — relationships — how they begin; how they end; how they sustain themselves; reverberate through the more rewarding plays in this year’s “Tens” collection.

Steven Korbar’s “Honestly,” for example, peeks in at a mid- to late-20s twosome: Bobby (an engaging Doug Harris) and Kaylene (Kelsey Rainwater in an exquisitely layered, nuanced performance), marking three months of dating by breaking up. Kaylene has made it a rule of her life never to date anyone beyond three months. And, of course, it is only now, at this moment of finality that Kaylene and Bobby find they have never been more open to each other; honest. For Kaylene, relationships built on lies, secrets, withholdings are par for the course.

“I’m not sure that you really make it years and years without somebody lying,” Kaylene tells Bobby at one point. “I think that it’s kind of like kissing ... when you’re that close up; maybe it’s really just better not to have your eyes open, you know?”

Breaking up turns out to be easy to do in Glenn Alterman’s acceptable “Love Me, Love My Work” in which a playwright named Jane (Peggy Pharr Wilson) ends a relationship — “delete” is her word for it — with a man named Ned (Matt Neely) whom she has known quite well for some time.

Transition is at stake in Chelsea Marcantel’s far more successful “Climax” in which two best friends for years, Sam (Rainwater) and Teddy (Neely) reach a possible turning point in their relationship during a double date between Sam and her husband, Marcus, and Teddy and his girlfriend of two months, Laura.

Sam’s dilemma is that she is trapped, she says “in a boring marriage with a good man. And I … I never considered that possibility, when I was single. I don’t know what to do about it.” Teddy’s dilemma is that he is deeply in love with Sam. And so, while Marcus is off getting the car, Sam and Teddy try to come to terms with the options, and consequences of those options, that now face them. Just as the play reaches what seems a sweet resolution, Marcantel goes just a step further in a moment that feels gratuitous and anti-climactic. Still, under Penn’s direction, the pacing and rhythm are solid and Rainwater and Neely handle Marcantel’s material with light hand and heart.

Another kind of relationship – mother and daughter – is at the heart of Robert Weibezahl’s affecting, touchingly performed and authentically directed (by Julianne Boyd) “Gown” which Wilson’s Lynn and her daughter, Annie (a bright and fresh Aziza Gharib) in a say-yes-to-the-dress bridal store visit with a very different nuance.

And what would a program like this be without a little politics thrown in for good measure? "10X10" ends with Cary Pepper’s obvious, unoriginal “The Voice of the People” in which a local television news anchor (played by Zukerman) and his partner Barbara Clark (Rainwater) try to gauge the voice of the people of HomeHaven, USA, a town of just under 500, on the day of and day before mayoral election day. The leading candidate appears to be John Smith, who has no political experience, no political record, no platform, no endorsement, no spokesperson, and refuses to make any public appearance. His opponent, Sean Tigon, is a thoughtful man with compassion, a heart, common sense, practical accomplishment.

“The Voice of the People” feels considerably longer than its brief running time; like a two-minute, at best, “Saturday Night Live” sketch stretched well beyond endurance; an opportunity for the 10X10 cast to let off a little steam with some unapologetically broad comedic performances.

Led by Wilson, who is wonderful to watch throughout, the company, with the exceptions of Zukerman’s self-indulgences, is able and appealing. The plays, for the most part, seem less inventive onstage as they must have seemed in the mind.