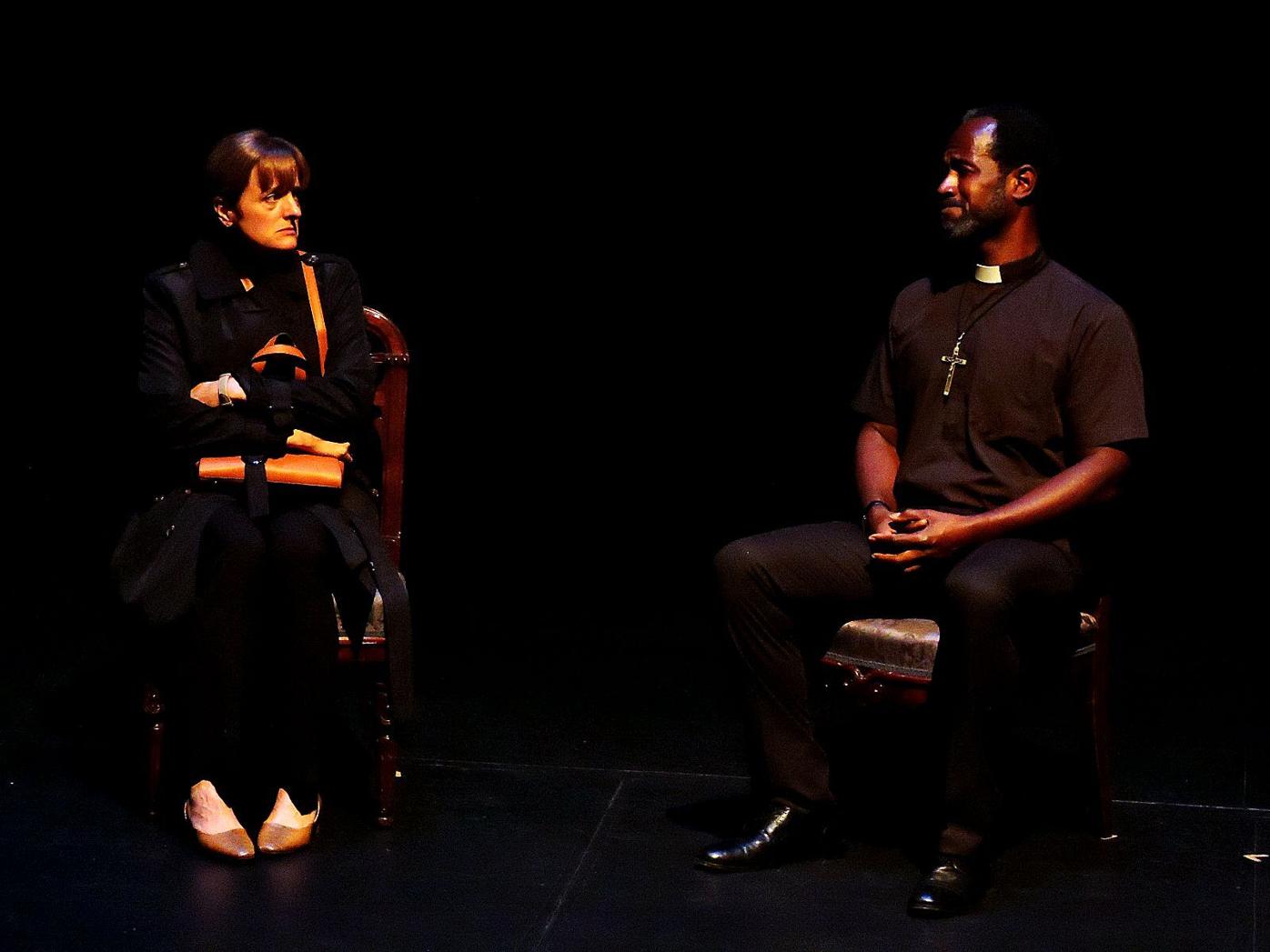 Keira Naughton, as Joan, and Nathan Hinton, as Father Paul, in "The Christopher Boy's Communion" at Great Barrington Public Theater. 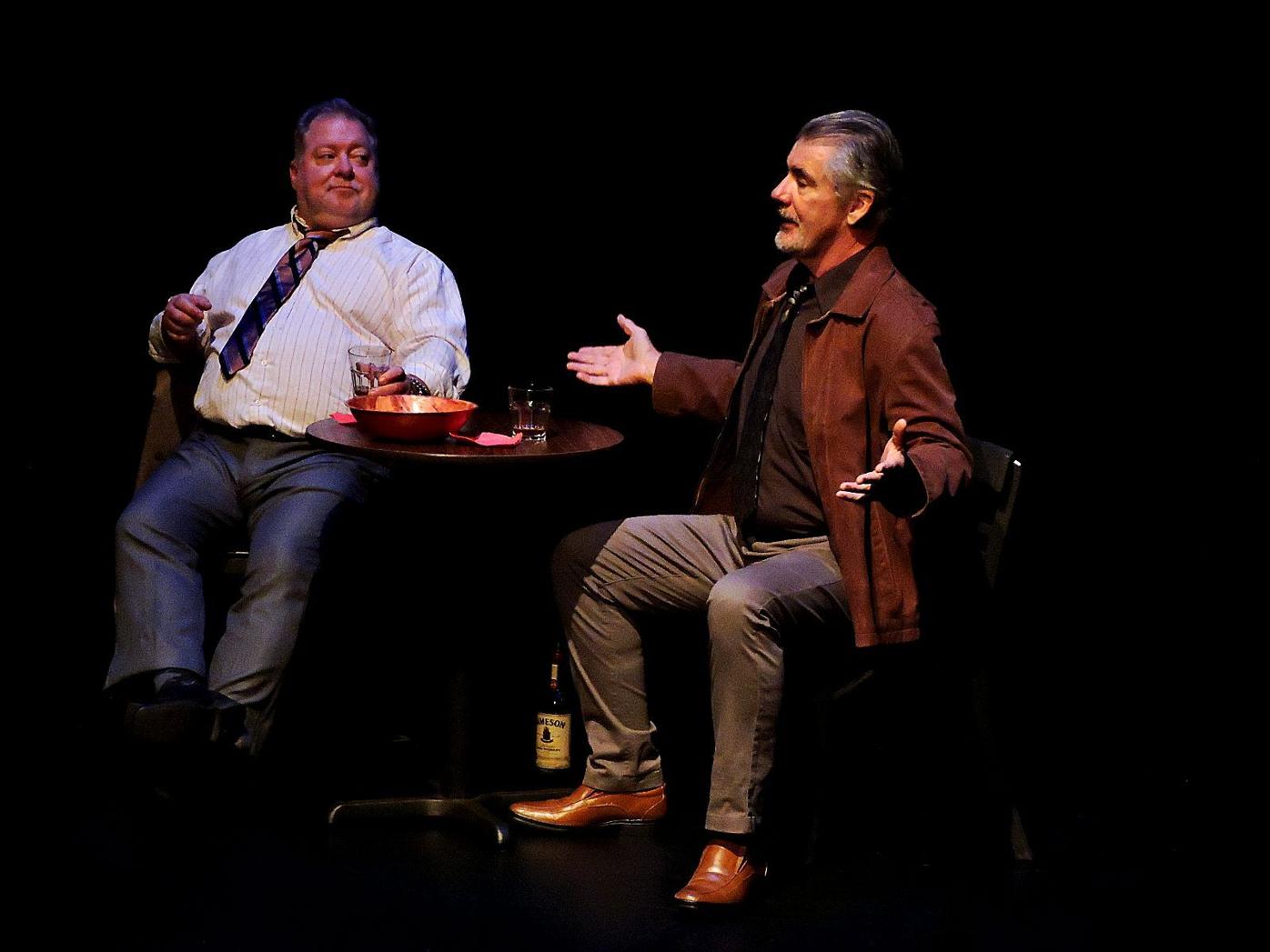 What: “The Christopher Boy’s Communion” by David Mamet. Directed by Jim Frangione

NOTE: Masks must be worn by all persons at all times inside the Daniel Arts Center

For an affluent Catholic couple, Joan (Keira Naughton in a generally creditable performance that doesn’t consistently hold the production’s center in ways that it should) and her accommodating husband Alan (David Adkins doing the best he can with a thankless role), the stakes are high. Their teenage son, Michael, is in jail for the brutal rape, murder and fouling of the body of his Jewish girlfriend in Central Park.

Joan, who is as virulently anti-Semitic as she is devoutly Catholic, wants her son freed, no matter what the cost.

“If I can, I will destroy anyone who stops me from helping him,” she tells her priest, Father Paul, in what may well be the most ironic statement of this intermissionless 75-minute evening.

In her meeting with their Jewish lawyer, Mr. Stone (Will LeBow in a smart turn), Joan makes what she wants from him abundantly clear — (“We’re) paying you to lie. And confuse, and for whatever tricks you know how to do, that’s what we are paying you for.” Stone counters by trying to persuade the couple to accept reality; that their son has committed a monstrous crime for which he will be sentenced to prison. The best he can do as their lawyer is mitigate the punishment. That’s not good enough for Joan, who then devises a strategy to vilify the girl; that her son is, in fact, the real victim.

She tries to persuade their priest, Father Paul (a credible Nathan Hinton), to violate his vows and moral principles by having him falsely suggest at trial that, in the confessional, Michael said “he was tortured by shame. That the girl had corrupted him. Not just the drugs: his spirit. She mocked him, that she mocked our religion, she … induced him. To do things … .”

Having failed with her attorney and with Father Paul, Joan’s final resort is a mysterious woman, Mrs. Charles (a commanding, nuanced Diane Prusha), with whom Joan ends up striking a Faustian bargain, the consequences of which play out in the final scene — a replay of the early scene in which we are introduced to Joan and Alan, only this time with a twist.

“The Christopher Boy’s Communion” actually begins with a lengthy, extremely talky scene between two cops — Hollis (Kevin O’Rourke) and Burke (Monk Schane-Lydon) — who are at a table at a bar, drinking, in the aftermath of the suicide of a friend and colleague, George, who came across the murder in the park as it was being committed and then, hours after the youth was taken away, put a gun to his head.

Hollis is recalling the “good old days” when cops would have “gone off” on suspects. “Old days, George would of took his sap and beat the kid to death,” Hollis says. In these new days, suspects, particularly with means, are placed in the hands of clever lawyers who frame their defense in ways that absolve their client of any responsibility; the Devil-made-me-do-it defense, Hollis calls it. This long, long talky opening is meant to set up all that follows. In effect, it’s little more than gratuitous discourse.

Director Jim Frangione’s production moves along at a somewhat even-handed pace. At the same time, his production doesn't build the steady momentum it needs to carry Mamet's play through to its climax.