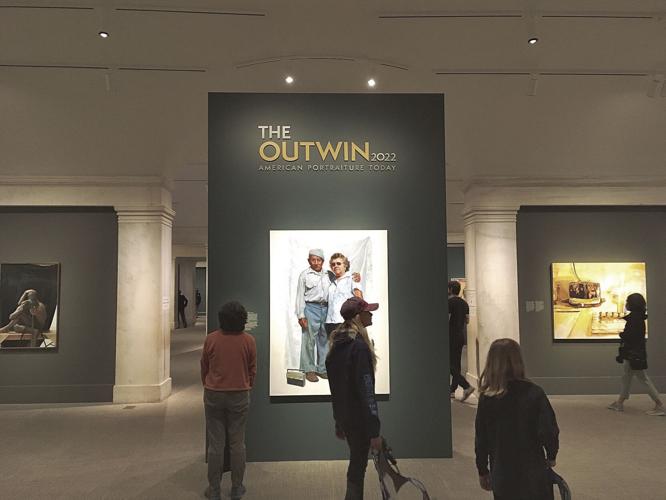 The Outwin Boochever Portrait Competition, which the National Portrait Gallery in Washington D.C., runs every three years, features West Stockbridge Artist Ilene Spiewak and will travel to Massachusetts in 2024. 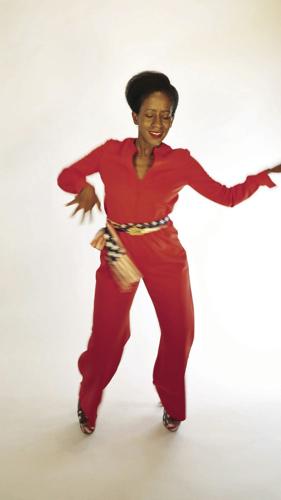 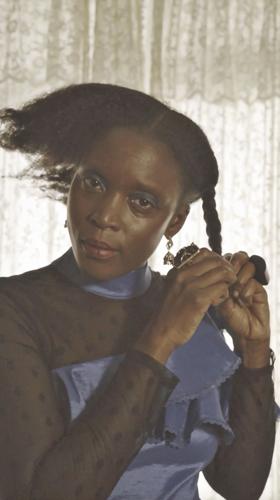 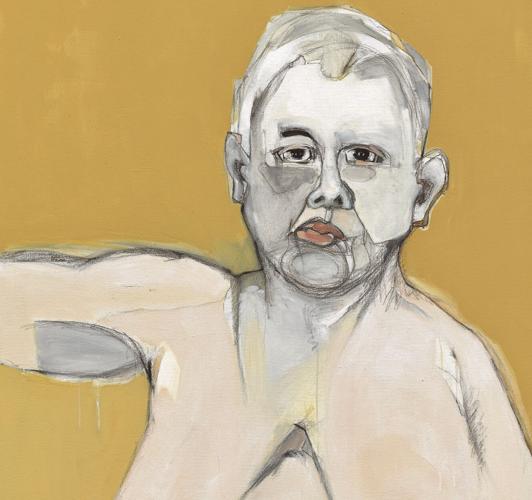 Ilene Spiewak, "Deeper into the Isolation of Self Information and Gender," 2020. Acrylic paint and charcoal on canvas. Collection of the artist, (c) Ilene Spiewak. 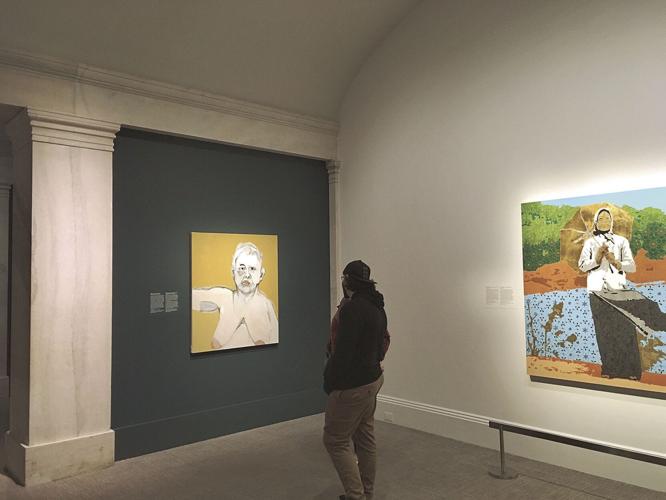 West Stockbridge artist Ilene Spiewak's finalist work hangs near the beginning or the end of "The Outwin 2022: American Portraiture Today" at the National Portrait Gallery in Washington, depending on the side you enter. 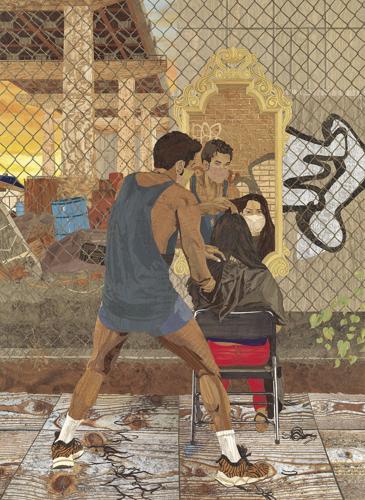 WASHINGTON — When Gian Lorenzo Bernini, the great Italian Baroque sculptor, turned his chisel to the Biblical subject of David, what he created changed everything.

He showed David not contemplative in victory, as Donatello, nor steeled in preparation, as Michelangelo. Bernini made him angry. He splayed David’s feet, so much so his toes overhung the pedestal. He turned him and placed his arm behind him, stretching the sling as he eyed Goliath hungrily.

What: "The Outwin 2022: American Portraiture Today"

Bernini captured David at the critical moment as he threw, impossibly active for a slab of marble, hiding its supports and almost magically raising David’s left foot to its toes, as if the sculpture was untethered from this world completely.

As Renaissance gave way to Baroque, this paradoxical art, in which artists strove to create the most difficult, intensive works that nonetheless appeared heavenly and effortless, was all the rage — and Bernini was its master.

In a new juried exhibition at the National Portrait Gallery, which highlights a Berkshire painter and will travel to Massachusetts in 2024, that Baroque paradox makes a comeback.

At the latest Outwin Boochever Portrait Competition, winning artist Alison Elizabeth Taylor, of Brooklyn, N.Y., imbues a bit of David into her Anthony, a hairdresser she captures plying his trade underneath the Williamsburg Bridge. In an early study for the work (included in the slim but handsome exhibition catalog), Taylor met Anthony in narrow profile, his legs together as he cut hair. In the final work, his legs are splayed like David’s, and he is made preternaturally active as he wields his tools and dominates the space.

Taylor calls her work “marquetry hybrid” — it comprises more than 100 veneers of various woods that should exude weight but seem to lift off the ground as they lengthen the subject and his surroundings with their sinuous grain. The medium is clearly one of careful planning and painstaking work, yet like a sketch it captures the energy of the highway overhead as if I can almost hear it, and a concoction of exhaust, East River breezes and hair product I can almost feel burning the back of my throat.

We learn from wall text that Anthony was forced by COVID-19 lockdowns to work in the streets, and indeed he in his tiger-striped sneakers and his customer in her bright red pants are wearing facemasks.

The Outwin runs every three years, inviting artists to push the boundaries of portraiture and rewarding its top performers with cash awards and — in the case of 2016 winner Amy Sherald, who later painted Michelle Obama — a significant career boost. Ilene Spiewak, of West Stockbridge, earned a spot in the show for her self-portrait, "Deeper into the Isolation of Self Information and Gender," which also graces the catalog’s back cover.

The show is a reflection of its time with each edition, but this time it’s irrepressible: This is the COVID Outwin.

Beyond the literal masks and mortality, the all-pervading milieu of this international moment seeps onto canvases whether the artist intends it to or not, and even if the work was completed before the virus hit. Masked up in this museum that was closed for months, I can't help but project my experiences.

Perforations obscuring a face become a mask; the canvas itself becomes a plastic barrier in a checkout line; and bars of shadows, windows and frames become isolation booths or even Zoom video windows before my eyes.

Video, for its part, is at this Outwin in a big way.

Two contrasting presentations occupy wall space alongside paintings, and thus are immediately reminiscent of our screen-based COVID existences. “American Woman” by Holly Bass is actively, knowingly performative (it is intended to accompany a 7-hour live Bass performance), yet "the un-doing" by Adama Delphine Fawundu feels private, as if we've entered into her mind as she takes out her braids to a jarring soundtrack of crosscut whispers and violins.

Relegating the other video works to a rotating screening in a gallery alcove may have been necessary, but it is a bad curatorial mistake. They feel like afterthoughts, and are difficult to distinguish as artworks from the introductory video of curators and jurors on the exhibit's other end.

So too do a few works betray a pernicious Smithsonian tendency toward the obvious, overwrought average. But on the whole, this is an exceptional Outwin with a narrative flow that is staggering to achieve in a juried competition, as opposed to a thematic show or monograph.

Much of the work feels trapped, as though we are quarantined inside someone's brain and home. And there is a great deal of nontraditional media (fiber, a produce crate, recycled skateboards), as if the artists at home raided their craft boxes and overturned their rubbish bins when supply stores shut.

Part of that is the nature of a competition like this, for artists who chiefly capture the real “home lives” of non-famous subjects, devoid of the ugly pomp of "America's Presidents" nearby. Part of this is the mark of great portraiture, where inanimate eyes invite us into themselves. And part of it is the COVID era in the COVID Outwin.

As a juror remarks in that introductory video, the competition is one enormous "portrait of the time we are living in."

Like Fawundu’s work, Speiwak's nude self-portrait is as though looking into a mirror, almost casually, yet tunneling into us with her eyes — square and black and swimming in vitreous thought — to acknowledge that this is posed.

The sharp, sweeping forelock of her hair; the pursed, beak-like spiral of her lips; the maelstrom rendering of her chin; and the angular quality of her neck and torso are an exercise in this framing: framing herself in the context of art and beauty; framing each feature in a dark charcoal outline; framing her face against a field of yellow; framing her artwork for us, the viewing public.

Spiewak's work hangs near the beginning or the end of the show, depending on the side you enter. If the former, its big eyes and egg yolk background welcome you into the subject's warm humanity of peaches, yellows and dull pinks. If the latter, perhaps you get a sense of the frailty of age. The grays of the skin and the black of the charcoal pull focus, the harsh fine features overtaking the warmer soft ones. Alphabetically last among finalists, it’s this second notion that comes to bear in the catalog, but it's a painting that deserves walking past twice.

It’s a scene of decay and degradation, the blue of discarded oil drums only minutely counterpointed by green flecks of vegetation. An ornate, golden Baroque mirror, its tentacular frame impossibly hung on the chain link fence behind, is perhaps the only perfect, unbroken item in the tableau.

So what of that Baroque paradox, of effortful effortlessness?

It’s a sort of illusion. Just as the frenetic charcoal strokes of Spiewak's work belie the care used to depict a rather serene self portrait, so too do the staid wooden components of Taylor's work create a double trompe l'oeil — of wood becoming paint and of static weight becoming effervescently buoyant, like that floating mirror.

This tension is a force of nature at the Portrait Gallery. It’s a dreary place of columns and heft, yet an airy place of bright color and radiant light. It can be “America’s Presidents,” where the latest mandatory addition sneers across at a poignantly placed portrait of Rep. John Lewis. Yet it can be the Outwin, where people paint people and we’re all the better for it.

That’s what portraiture is: tension. It’s a permanent imprisonment of a constantly moving being.

All the artist can hope to do is successfully snap the shutter at the right moment: not one of inaction nor artifice, but precisely when David is turning to throw.

Evan Berkowitz is The Eagle's page one design editor. He can be reached at eberkowitz@berkshireeagle.com.

Evan Berkowitz joined The Eagle in 2018 after graduating from the University of Maryland. He became page one design editor in 2019.