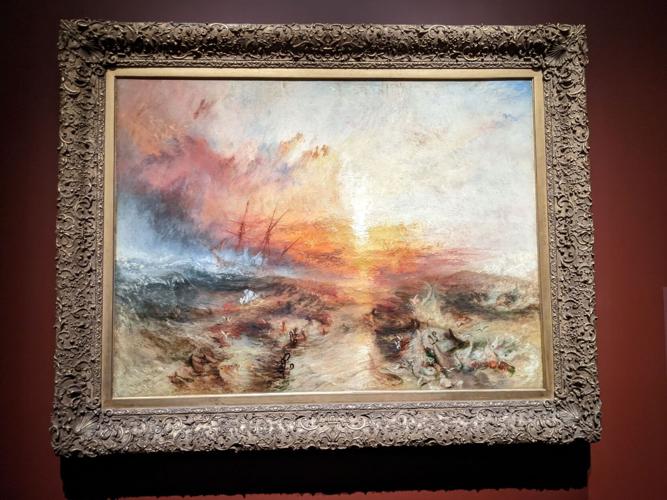 Turner's "Slave Ship (Slavers Throwing Overboard the Dead and Dying, Typhoon Coming On)," 1840, remains his most controversial work. The painting depicts a slave ship in the distance as a typhoon approaches. In the foreground, enslaved men, women and children, still shackled, are visible in the churning sea. 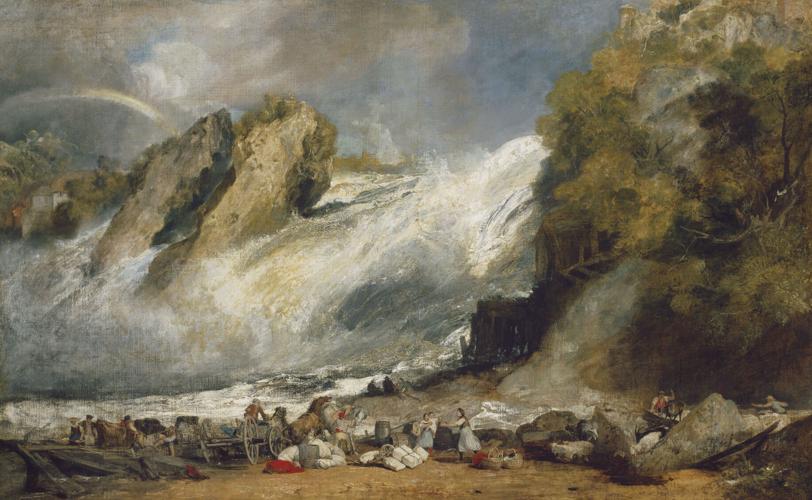 "Fall of the Rhine at Schaffhausen," by J.M.W. Turner, is on view as part of "Turner's Modern World." 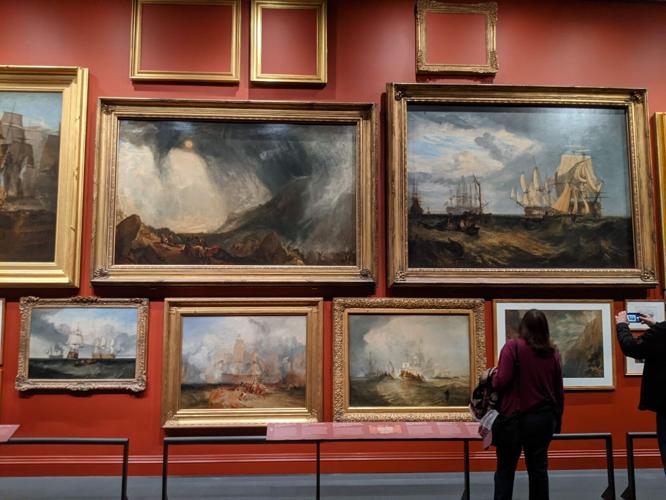 In one gallery, Turner's works of war are hung salon-style, as they would have at the Royal Academy.

BOSTON — A ship, sails furled, is tossed by the tumultuous ocean waves as it slips off into the blood-red sunset.

The sea churns, the sky darkens. A typhoon is imminent. The ship has tossed its cargo — enslaved men, women and children — overboard. Manacled hands pierce the waves, as seagulls wait to pounce on their prey. A leg, still shackled, juts out of the water, fish hungrily swarming around it.

On view: Through July 10

J.M.W. Turner, in "Slave Ship (Slavers Throwing Overboard the Dead and Dying — Typhoon Coming On)," was in no way subtle about the subject matter of the painting, first shown at the Royal Academy of Arts in 1840, released in concert with Britain's international abolitionist campaigns.

While critics debated whether or not manacles could float, Turner, an abolitionist, was making a statement. Not only were these human beings cast off as nothing more than cargo, but they weren't even given a chance at survival. And that was intentional — the ship's "cargo" was insured and payments would be made as long as the death was not from natural causes. Such was the case in 1781, when the captain of the Zong ordered 132 enslaved people be thrown overboard when the ship's drinking water ran low. The incident, which was included in "The History and Abolition of the Slave Trade" by Thomas Clarkson (a second edition was published in 1839) is thought to have inspired Turner's painting.

"Slave Ship," acquired in 1899 by the Museum of Fine Arts, Boston, is at the center of the museum's presentation of "Turner's Modern World," the third and final stop of this landmark exhibition. And the only one of the three to show "Slave Ship," a Turner said to be too fragile to travel.

On view through July 10, the show, organized by Tate Britain with the Kimbell Art Museum in Fort Worth, Texas, and the MFA Boston, brings together more than 100 paintings, watercolors, drawings, and sketchbooks by Turner. The show includes The Clark Art Institute's "Rockets and Blue Lights (Close at Hand) to Warn Steamboats of Shoal Water," "Snow Storm: Hannibal and his Army Crossing the Alps," from Tate Britain and "The Burning of the Houses of Lords and Commons, October 16, 1834," from the Cleveland Museum of Art.

Turner, heralded as one of Britain's greatest artists, was known for his luminous landscapes, dramatic compositions and his depiction of the world around him, a world full of unrest.

Born in 1775, Turner grew up during a time of cataclysmic change in Great Britain and in the greater world. Throughout his life, Britain was at war, or engaged in war, beginning with the American Revolution. The French Revolution soon followed, as well as the Napoleonic Wars and the War of 1812. During his lifetime, he would witness the industrial revolution with its steampowered ships and trains, and the introduction of gas streetlights. Queen Victoria would ascend the throne, slavery would be abolished and later, the ownership of enslaved people, and Karl Marx and Friedrich Engels would publish "The Communist Manifesto."

For many, Turner is the quintessential "rags to riches" story. Born to a barber and the daughter of butcher, Turner would have been destined for similar trades had he not been considered a child prodigy. He entered the Royal Academy in 1789, at age 14. His first watercolor, "The Archbishop's Palace, Lambeth," was accepted at the Royal Academy's summer exhibition in 1790. He was 15. But too often Turner is praised for crossing socioeconomic barriers while holding firm to his cockney accent. Was this really such a feat for a white man of his day? A man of considerable talent, with patrons who were willing to overlook his gruff manners and eccentricities in favor of his breathtaking work?

The exhibition, as it is laid out, can be mistaken for a retrospective of his work, as one moves from gallery to gallery and sees the work on view progress from his early days at the academy to his later years as an accomplished artist of the Romantic Movement. Instead, the show should be viewed as a documentation of his evolution as an artist; from the boy who sought royal patronage and glorified acts of war in his paintings, to the man who later created images that spoke of the need for reform, of the negative impact of colonialism and imperialism, and of the lasting effects of war.

Turner entered the Royal Academy at a time when artists were discouraged from painting contemporary subjects. Instead, as a student, he would be taught to draw from plaster casts of Greek and Roman statues. But as Turner traveled in those early years of his career — to France, Switzerland and later Venice — he would would fill sketchbooks with his contemporary surroundings, making drawings and watercolors of technology and working people. Shown in the first gallery of the exhibition, these works would creep out of his sketchbooks and into his paintings. In the "Fall of Rhine at Schaffhausen" (1805-06), the famous waterfall of the Swiss Alps commands our attention. Below, a woman rushes to save her children from the fighting carthorses. Here, nature is a powerful force, the tribulations of humankind play out in a most insignificant way.

In the gallery that follows, we witness Turner, as a young man, seeking royal patronage. But at the same time, he is struggling to find that unique voice that would make him the most celebrated landscape painter. Here, the 11-foot wide "England: Richmond Hill, on the Prince Regent's Birthday" is designed specifically to catch the eye of the royal court. But here, too, are landscapes of failed canals and lofty country estates with lime kilns in the foreground.

In a brooding, deep red gallery, the exhibit shifts to a section themed "War and Peace," where paintings of his early and his later depictions of war hang salon style, as they would have appeared alongside other works exhibited by the Royal Academy. Here, his changing attitude toward war is on display. His much lauded, "The Battle of Trafalgar, as Seen from the Mizen Starboard Shrouds of the 'Victory,'" commemorating the British defeat of French and Spanish naval forces, hangs near his later "Field of Waterloo." Instead of celebrating the triumph over Napoleon in his final defeat, this somber piece is a portrait of the consequences of war. No longer does he favor his country's triumphs.

At the center of the exhibition, among paintings of Parliament ablaze and "The Fall of Anarchy (?)," in which Anarchy appears as a skeleton mounted on a horse, is the gallery "Causes and Campaigns," where Turner comes into his own, addressing parliamentary reform, freedom of expression and confronts contemporary issues, such as the abolition of slavery. It is here that "Slave Ship,' holds court.

The last gallery of the show is, by design, stark white, sleek and modern. The section, "Modern Painter," highlights Turner's development in the final decade of his life, his shift to even more atmospheric paintings, his focus on light and atmosphere. The gallery is a culmination of an exhibition aimed at celebrating Turner as a modern artist. Yes, Turner was unusual for his time, as his works addressed social and political causes and shifts like no other artist of his time did. Yes, he was at the forefront of the coming movements of the impressionists and later the abstract expressionists.

But how can we best celebrate Turner today? Instead of looking to the past, perhaps his legacy would be better served if that final gallery gave space to contemporary artists who record and comment on the social injustices, political upheaval and rampant technological changes of our current, modern world. Unfortunately, the ending of the is evolutionary journey falls a little flat at the end.