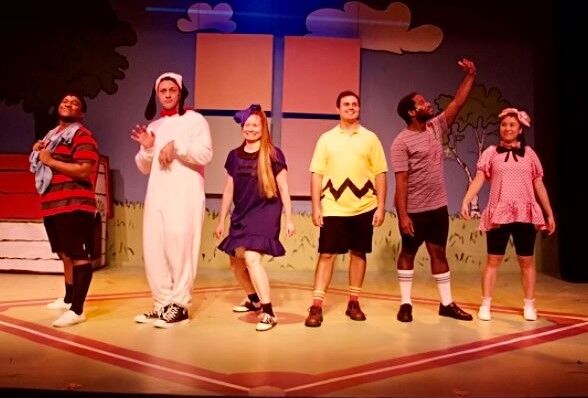 The cast of "You're A Good Man, Charlie Brown," from left to right, Brett Hennessey Jones as Linus; Jared Bakum as Snoopy; Raina Fraley as Lucy; Christian Ortega as Charlie Brown; Kyle Jack as Schroeder; Emily Song as Sally. 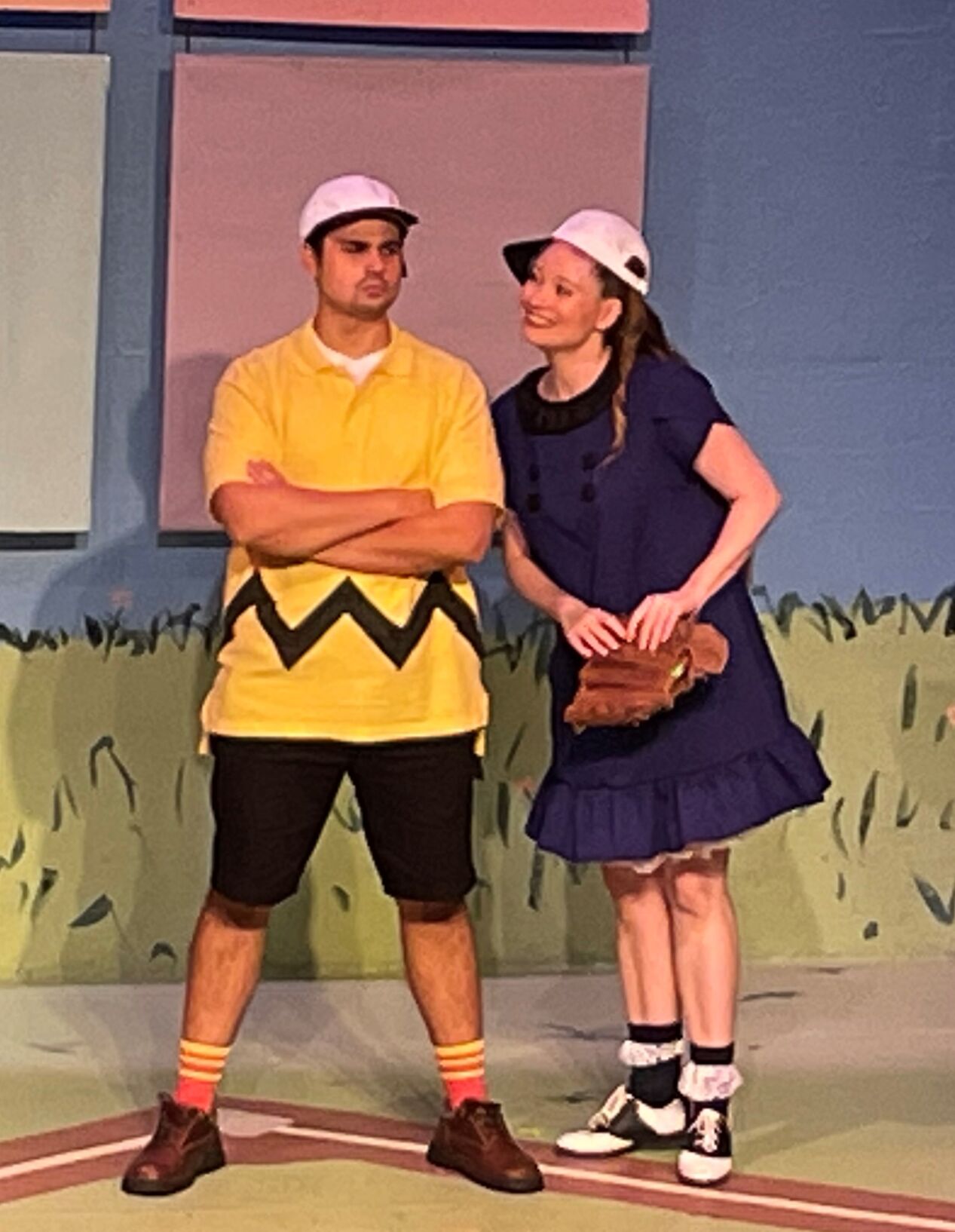 Christian Ortega as Charlie Brown and Raina Fraley as Lucy in the Theater Barn's production of "You're A Good Man, Charlie Brown." 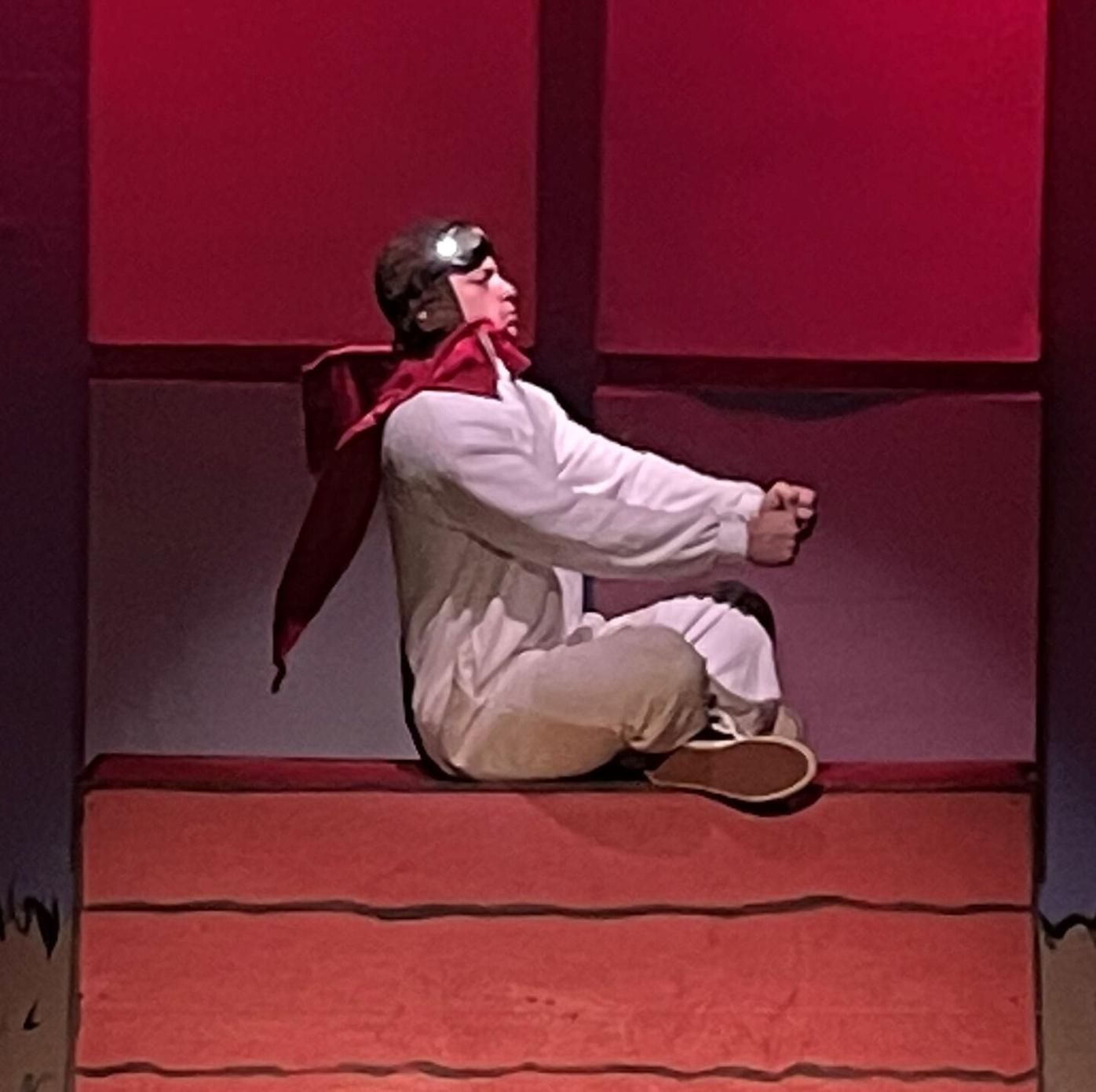 The World War I Flying Ace, also known as Snoopy (portrayed by Jared Bakum), in his Sopwith Camel biplane, battles the Red Baron.

The cast of "You're A Good Man, Charlie Brown," from left to right, Brett Hennessey Jones as Linus; Jared Bakum as Snoopy; Raina Fraley as Lucy; Christian Ortega as Charlie Brown; Kyle Jack as Schroeder; Emily Song as Sally.

Christian Ortega as Charlie Brown and Raina Fraley as Lucy in the Theater Barn's production of "You're A Good Man, Charlie Brown."

NEW LEBANON, N.Y. — There is a delicious whimsy in Sam Slack’s deceptively simple set design for director-choreographer Rebecca Frazier’s production of the musical “You’re a Good Man, Charlie Brown” at The Theater Barn. If only that sense of playfulness and ease were infused in the members of Frazier’s too-often too-hard working cast.

The musical runs through Friday, Sept. 5.

COVID-19 safety protocols: Ticket holders must be fully vaccinated. Masks are required inside the building

The musical premiered Off-Broadway in March 1967 with book, music and lyrics by Clark Gesner based on material in Charles M. Schulz’ popular comic strip. The show ran nearly four years. The musical had a major, if short-lived, Broadway revival — “You’re A Good Man, Charlie Brown (revised)” — in 1999 with new dialogue by Michael Mayer and some additional new songs by Andrew Lippa. That revival lasted only three months, but it’s the version that’s been done since at regional and community theaters. It’s the version being done here.

Mayer, Lippa and Gesner have remained true to the source and to Schulz’ abiding spirit. The principal characters are here in all their childhood/grown-up longings, accomplishments, small (and some not so small) disappointments, and an endearing spirit that never knows when to quit, let go or relent.

Under Kevin Francis Finn’s musical direction, the vocalizing, supported by a fine five-musician ensemble, is expressive and harmonious and Frazier’s stylish staging of the musical numbers is executed smoothly.

Every now and again, that whimsical impulse in the show’s design shows up in the staging. One of the more antic and inspired designs has Bakum’s Snoopy in a barely seen corner upstage attending to the kind of business nature requires dogs to attend to outdoors while downstage, Lucy is pressing one of the crew to answer a survey she is taking on her personality.

Frazier’s production is, at its most, engaging not only in its musical numbers, but also when it is in the hands of Fraley’s Lucy, even if her crabbiness can get overbearing at times, and particularly Tyler’s absolutely delightful Sally whose sublime “My New Philosophy” is a soaring testament to Sally’s facility for making lemonade when life, personified as her teacher, throws her lemons.

For all the hard work onstage, there is rarely that moment when you just want to put your arms around Charlie Brown or Linus or whomever and just say “There, there. Everything will be alright.”

When, in this production, the full company comes together for the concluding conciliatory “Happiness,” it’s just another ensemble number; missing is that underlying nuance that everything is whole and welcome. In that context, when Fraley’s Lucy shakes Charlie’s hand and delivers the final line, from which the musical draws its title, you can’t help but wonder if, rather than the confirmation of friendship it is meant to be, this is just one more trick Lucy is playing on the hapless Charlie Brown.

Oldcastle staging the gold standard of ghost stories, 'The Turn of the Screw'

Considered by many to be the gold standard for ghost stories, “The Turn of the Screw” was serialized in Collier’s Weekly in 1898 and subsequently published as a novella. It tells the story of a young governess who is hired to look after two orphan siblings, Miles and Flora, who live on a remote estate outside London. It is not long before the governess comes to believe that the children are being haunted by the specters of their previous governess, Miss Jessel, who committed suicide, and the estate’s groundskeeper, Peter Quint, who died under mysterious circumstances.

Theater Barn opens 'Good People,' a production with many layers

Margie is up against it. She’s been fired from her job at a local dollar store and is facing likely eviction.

She’s a high school dropout; has been unable to hold a job and the prospects for finding work are, at best, limited. That's when she learns that an old high school flame, Mike Dillon, who got out of Southie, has returned to Boston.