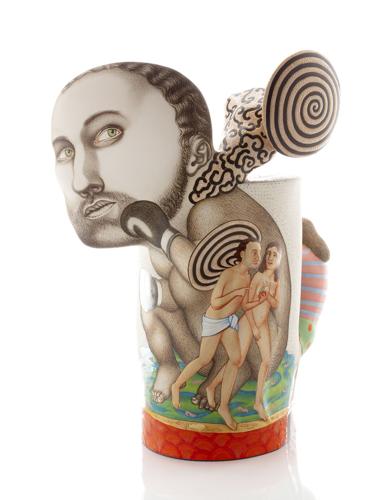 "Like an Eternity," a new sculpture by Sergei Isupov, is on view at Ferrin Contemporary in North Adams through June 25. 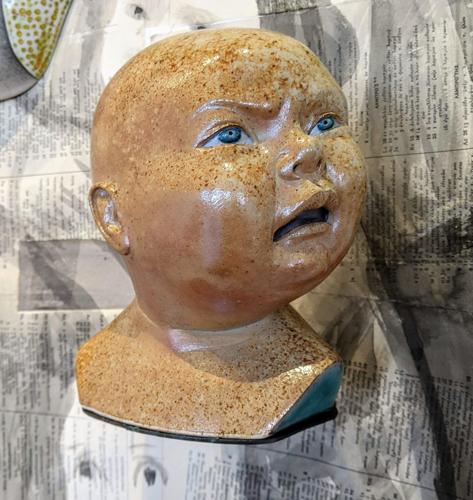 Artist Sergei Isupov has created a wall displaying many of the sculptural forms, mainly heads, he makes during demonstrations. The wall is part of "Past & Present" at Ferrin Contemporary. 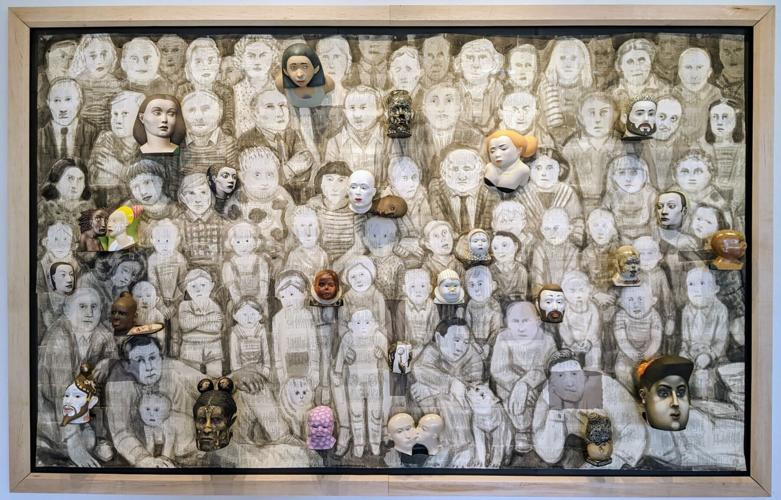 Artist Sergei Isupov has created a wall displaying many of the sculptural forms, mainly heads, he makes during demonstrations. The wall is part of "Past & Present" at Ferrin Contemporary.

NORTH ADAMS — Sergei Isupov's newest sculptures are tiny universes filled with never-ending narratives in the round.

There are men and women engaged in intimate conversations, traveling in cars and on foot; a mechanic fixes a car; a cat looms large in the background as a couple lounges on a lawn gazing skyward. In all there is an air of urgency; of waiting for the other shoe to drop; of hope.

The work, he insists, is not in response to the war in Kyiv, Ukraine, where his parents, a brother, live and work.

What: "Sergei Isupov: Past & Present"

"I made all of this listening to the stories on the radio and talking to my parents every day about what they are going through. I hope not too much of that is visible here, but if there is a little bit, that is ok," Isupov says during an interview at Ferrin Contemporary, where his new solo show, "Sergei Isupov: Past & Present," is on view through June 25. An artist talk and reception will take place at the gallery, 4 to 6 p.m., June 4.

"I didn't want to be political, but I want to be human," Isupov says, surveying the gallery.

There's an underlying worry that his work will show anger, or promote it the emotion in some way.

"It's much like the power of propaganda or even journalism, which can promote anger. Sometimes art is so powerful, it promotes anger too," he said. "They [my sculptures] promote something, but something good.

There is little doubt that his worry for his family, his homeland is intertwined in this most recent work; work created in tandem with overseas events, worry for his family, anxiety over Russian movements in Ukraine and Estonia. Born in Stravapole, Russia, in 1963 to a painter, his father, and a sculptor, his mother, Isupov was raised and educated in Kyiv and in Tallinn, Estonia, both independent countries that were once part of the USSR. At 11, his parents sent him off to school, an arts academy, where he focused on painting. After graduation, he went off to university, where he studied ceramics. After living and working as an independent artist in Estonia, Isupov moved to the US in 1994, moving to Cummington in 2006, where he works and lives with his wife, artist Kadri Parnaments, and their daughter Roosi.

The sculptures, he said, are a continuous narratives, with no end and no beginning. While his emotions and life experiences influence the works, he says he has no explanations, no preconceived narratives for the surrealist stories that unfold in the paintings he creates on the textured surfaces of his sculptures.

"When I am interviewed, most want to know what I dream about; if these are my dreams," he said. "They want to know the story behind it. There is no narrative. The narrative is for you to decide."

His work, he says, is full of simple symbols, that are universal, easily interpreted and understood, such as the figures of Adam and Eve, seen in flight with apples from the tree of knowledge, on one side of "Like an Eternity." Behind them, a man with boxing gloves crouches, waiting for an unknown assailant. As the story moves round, a large head looms high above a couple, deep in conversation. Is the form listening? Spying? An eavesdropping god?

This show, Isupov says, was inspired by and in response to the nearby "Ceramics in the Expanded Field," a group show on view at the Massachusetts Museum of Contemporary Art.

"I wanted to make something in contrast to the Mass MoCA exhibition, where the objects are so big and sharp. I wanted to make something small and precious, that you would want to take home. Something, that if there was a fire in your house, you would grab on the way out, to save it," he said. "Maybe it's because I grew up not having enough in childhood. I grew up in a third-world country where objects are really precious. If you have a pair of shoes, you have one pair."

His work, he says, is a bridge between the two cultures, between his past and his present. And like the future, there is always more to come, a new story to tell.