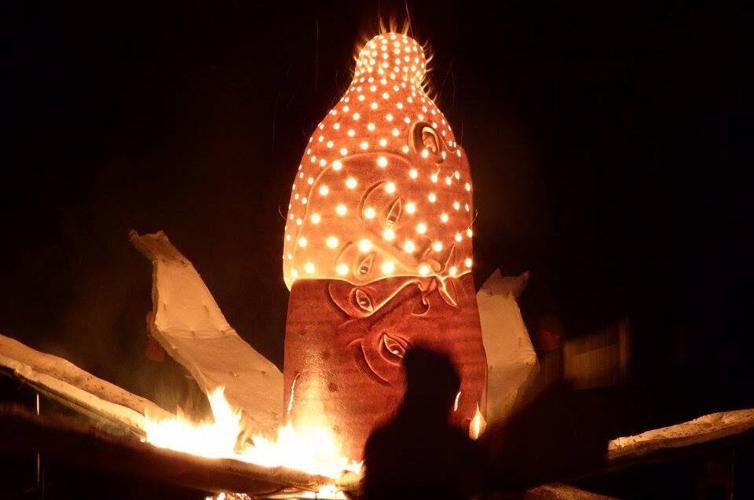 Sergei Isupov's fire kiln firing will be he highlight of TurnPark Art's summer festival on June 11. Seen here is the opening of a previous petal kiln firing at Guldagergaard International Ceramic Research Center in Denmark. 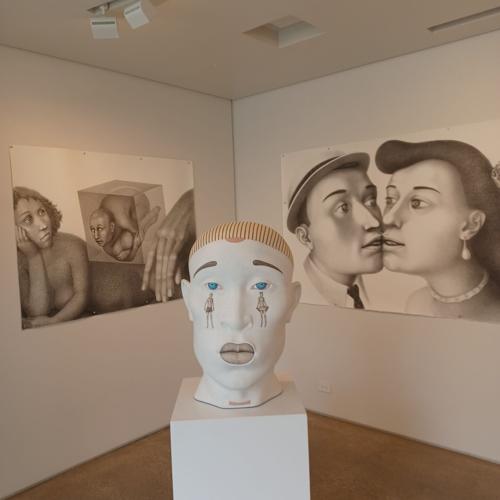 In addition to firing his 8-foot-tall sculpture "Earth & Sky" during the TurnPark Summer Festival, artist Sergei Isupov has an indoor exhibit "Proximal Duality" in TurnPark's Gate House Gallery, on view through Oct. 31.

WEST STOCKBRIDGE — Two clay heads nestle cheek to cheek, hidden inside a tall outdoor wood-fired kiln that has burned since dawn. In the darkness of night, the sides of the kiln are lowered, like petals on a tulip, revealing a glowing red-hot 8-foot sculpture, flames licking at its base and shooting out of perforations in the form. Soon the kiln sides will close again, letting the artwork cool slowly before taking its place among the sculptures of TurnPark Art Space.

“Earth & Sky,” a rare fire sculpture by world-renowned Estonian/Ukrainian American artist Sergei Isupov is made in collaboration with Estonian master kiln builder Andres Allik. It complements “Proximal Duality,” an exhibit of Isupov’s large graphite drawings and smaller ceramic heads in TurnPark’s Gate House Gallery. It is also the highlight of the former marble quarry’s annual summer festival on June 11, a celebration of creativity that includes music, art and theater on a theme of “Healing Flames.”

“This will be the second festival at TurnPark,” Alex Zaretsky, TurnPark’s special projects associate, said during a phone interview. “Last year’s strong turnout motivated TurnPark founders Katya [Brezgunova] and Igor [Gomberg] to turn it into an annual tradition.”

Contemporary band Chingiz Dub will perform in the stone amphitheater at 9 p.m. prior to the sculpture’s 10 p.m. reveal. Led by Sasha Drey, it includes didgeridoo player Dima Klim in a mix of traditional Tuvan throat singing with experimental electronics music and live video mixing.

Georgian-born multimedia artist and maker of wearable sculptures, Uta Bekaia, will create four tableaux vivants of actors dressed as spirits. A longtime TurnPark collaborator, his work will flow through the grounds throughout the day, Zaretsky said.

Food will be offered for sale by Handcrafted, with stuffed shells, meatballs, a quinoa vegetable bowl and popcorn on the menu.

There will also be acoustic music scattered throughout the grounds and a short, repeated play in recognition of the situation in Ukraine. The festival will add to TurnPark’s ongoing fundraising for the war-torn region through donations and merchandise sales.

The cause is especially meaningful for Isupov, who grew up in Ukraine until age 20. His father, mother and younger brother, all artists, still live in its capital, Kyiv.

“Every time I hear the news it makes me so emotional,” he said during a phone interview.

His brother’s wife has left the country with their two younger children, but his parents don’t want to leave, he said. “They’re 83, there’s a feeling of safety at home because art is all around, it’s like their kids. Mum even likes it because there’s not many cars or people, it’s spring and it’s so peaceful and quiet downtown.”

Isupov attended art school in Estonia, home of his artist wife Kadri Parnaments. He immigrated to the U.S. in 1993, first to Kentucky. A Berkshire region resident since 2006, with their daughter they divide their time between studios in the U.S. and Estonia.

“I think it makes an artist more emotionally rich not to have physical connections to a space,” he noted.

He first worked with Allik in 2016 at STARworks in North Carolina, where Allik had been firing for several years, and a year later in Denmark.

“It’s not super difficult to build the kiln,” Isupov reported, “it uses simple materials you’re able to get from regular stores and is shaped like a bottle.”

“This will be my third fire sculpture. I do something slightly different every time, I learn every time, I feel I’m still not finished with this design.”

“My father is a painter, my mum’s a ceramic artist. I like to combine these two different sides, but in the same powerful thing.”

“Students think I have tricks, some special tool. But the biggest trick is discipline and experience. And imagination.”

A lot of ideas come from the technical side, he explained. “And later the story comes within the process.”

The drawings use different techniques to create the same illusion of 3D as the ceramic paintings, he said.

He wants to inspire wonder, “for people to feel like, wow!, how has he done it? And stop for a minute.”

“Sometimes education gives you handcuffs, in Ukraine, drawing and painting were very academic. Ceramics helped me forget everything and gave me freedom. Sometimes you need to break rules.”

“In the U.S. I am able to do both well,” he noted. “And my fire sculpture tempts me to be a performer too.”

“Sergei is very well known for ceramic art,” Fateyev said, “highly detailed small scale objects, with a lot of narrative stories. He sketches all the time, he’s a classically trained artist and his hand-eye coordination is impeccable.”

“I wanted to show his other side as a remarkable draftsman,” he added. “The scale is remarkable. Usually drawings are a secondary mode of art, [done] in preparation for a painting. But when you do a nine-foot-tall drawing, that’s a piece in itself.”

“The show title is a geometry term that means something in close proximity [that] becomes reflected and duplicated, but differently. It’s also a comment on polarization in our culture.”

Quite often in Isupov’s work, there’s one narrative structure happening on one side of a sculpture and something else happening on the other, Fateyev noted.

The outdoor firing at TurnPark illustrates the process of creating, Fateyev said, how the work comes to be. “The process is a very integral part of what we’re trying to show — seeing how the magic happens, being able to see the inner world of the artist.”

An exhibition of Isupov’s smaller sculptures, “Past & Present,” is on view at Ferrin Contemporary in North Adams, through June 26.