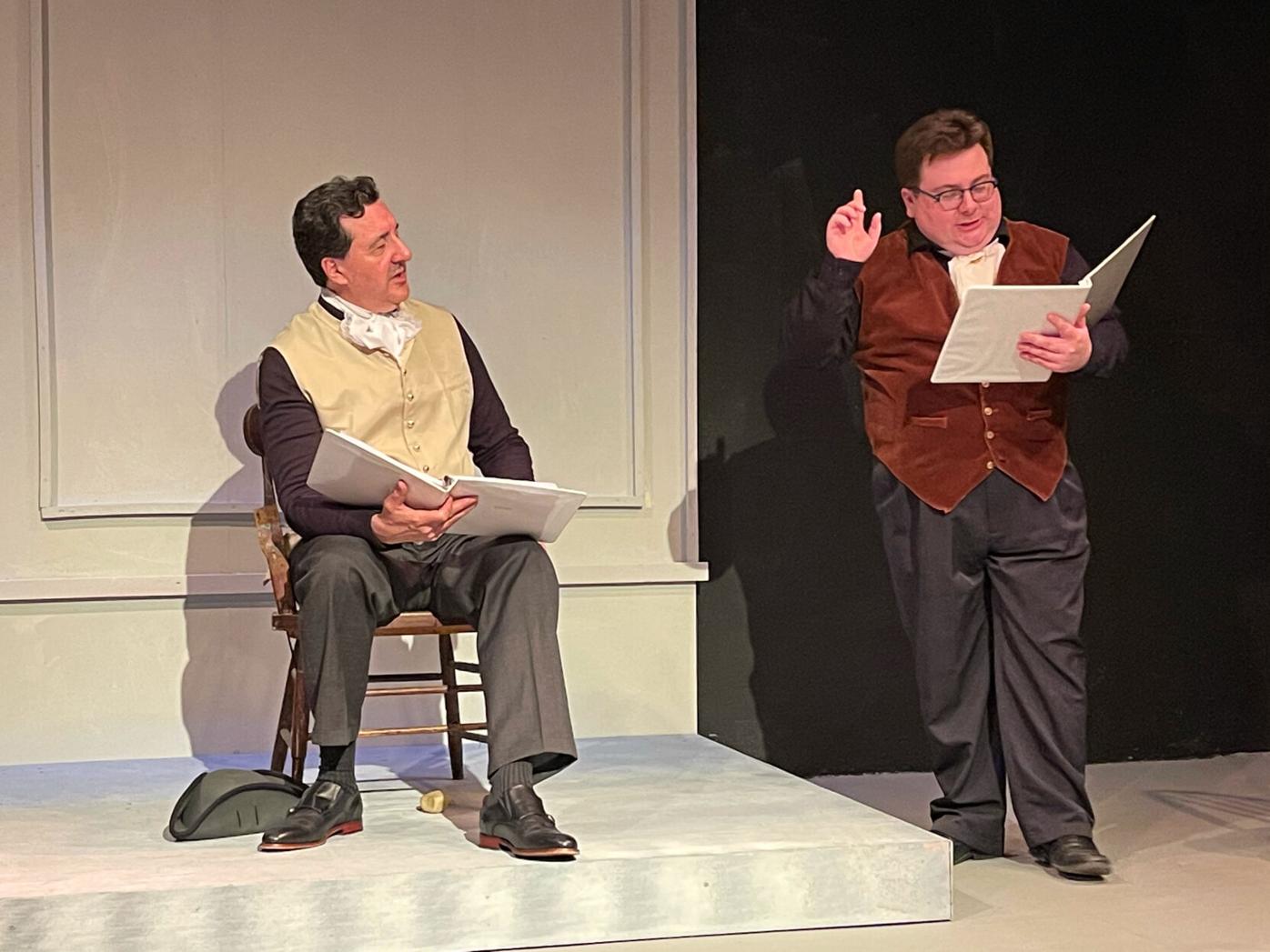 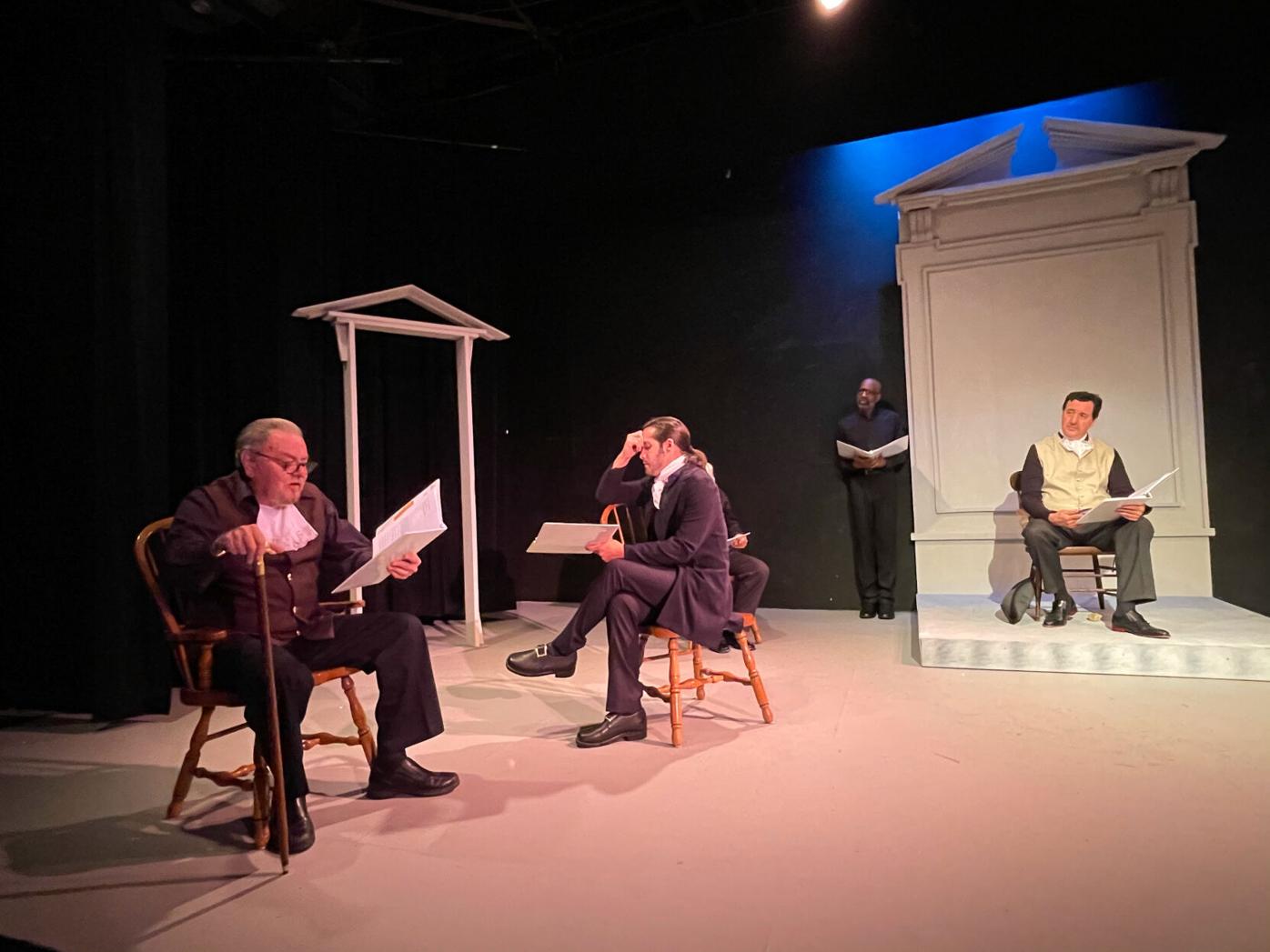 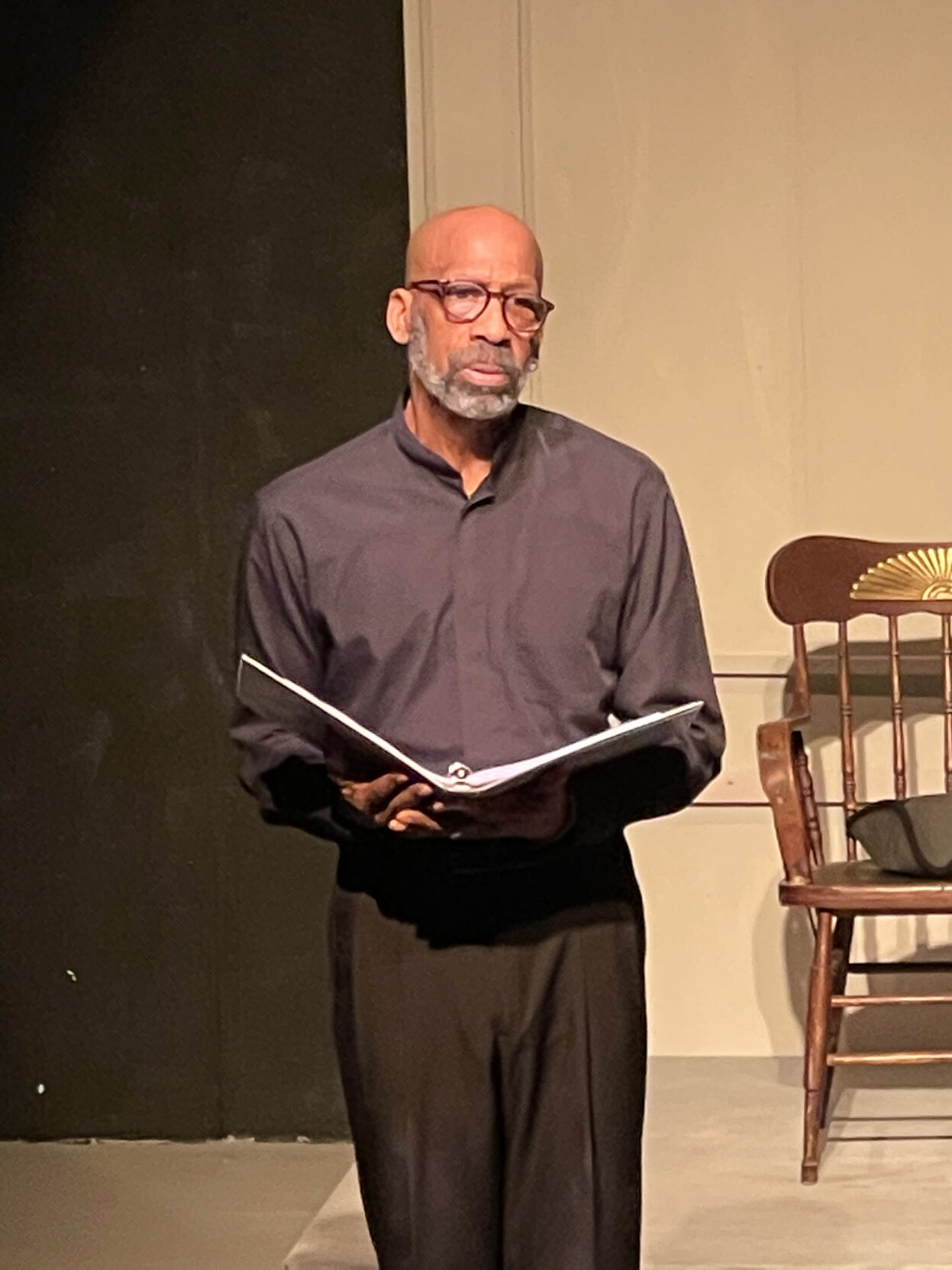 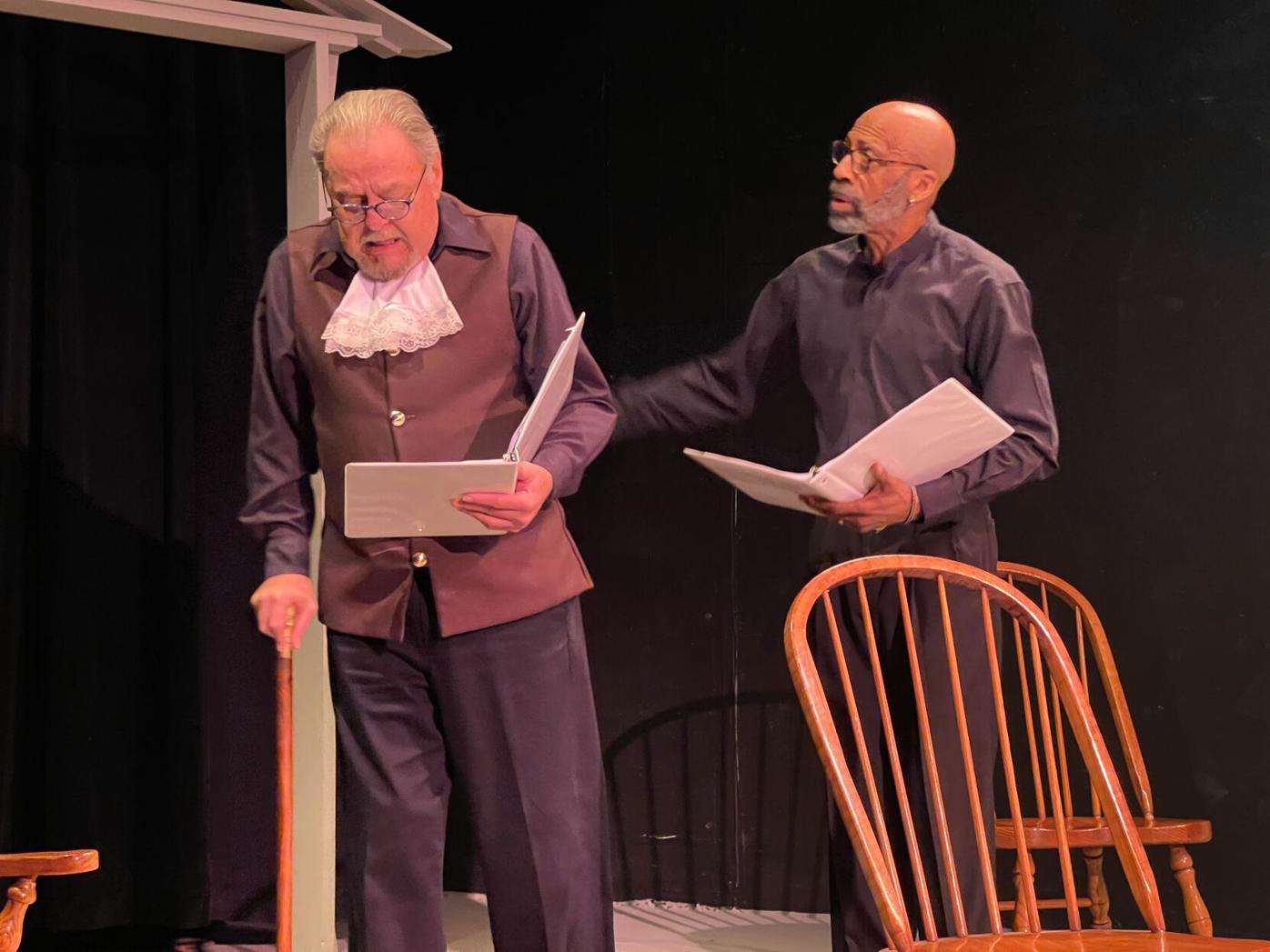 NEW LEBANON, N.Y. — The Theater Barn begins its 37th season this weekend with something it’s never done before — a staged reading of a new play. The way producing artistic director Allen Phelps sees it, this first staged reading won’t be the last.

The play, “We the People,” began Thursday, June 3, and continues Friday evening at 8, Saturday, at 4 and 8 p.m. and Sunday afternoon at 2. It’s the creation of 20-year-old novice playwright Harrison Zeiberg, a history and politics major at Wheaton College in Norton, Mass. It is set at the Constitutional Convention in Philadelphia in 1787. The play won a national playwriting competition and was produced, as a reading, at the 2020 New Works Festival.

For a history and politics major who has always loved writing, the Constitutional Convention was an irresistible subject, especially given today’s political climate. “This was one of the most important events in American history,” Zeiberg said in a brief interview.

“We the People” isn’t the only first-of-its-kind this summer at The Theater Barn. The reading kicks off a 2021 season that marks Phelps’ first as producing artistic director — a new title for the 54-year-old former Boston-area educator whose parents, Joan and Abe Phelps, are stepping away from the Route 20 theater they opened in 1984.

Both 83, the Phelps insist they are not too old to continue producing the Barn’s seasons. It’s just time, says Joan, who still will be found in the lobby greeting audiences.

“They want to do a little traveling and not be locked in to the theater during the summer,” their son said in an interview. He was joined by associate producing director Jon Earle and associate artistic director Monica Bliss, who comes to The Theater Barn after having served as artistic director of The Whitney Center for the Arts in Pittsfield.

Earle is an IT consultant who has been involved with The Theater Barn since his junior high school days in 1992. As associate producing director, he will handle marketing, audience development, business management and compliance, especially with regard to COVID safeguards. Bliss will work with Phelps on play selection and casting.

There are no dramatic changes in store. This 2021 season is a familiar mix of comedies, musicals and the traditional Agatha Christie.

Following this weekend’s reading, The Theater Barn season takes up June 24-July 4 with Becky Mode’s one-actor comedy, “Fully Committed,” about a struggling actor who works as a reservations clerk at one of the hottest restaurants in New York. The season continues July 15-25 with Agatha Christie’s “The Stranger,” and continues with “Night and Day: Love Lost and Found Through the Eyes of Cole Porter” (Aug. 5-15), a musical set in the Berkshires in the 1930s that spins a love story using the songs of Cole Porter; “You’re A Good Man, Charlie Brown” (Aug. 26-Sept. 5) the Peanuts musical in a revised version that reflects, Phelps said, America’s racial and ethnic diversity; and winding up with David Lindsay-Abaire’s edgy 2016 Tony Award-winning comedy, “Good People” (Sept. 9-19), set in Boston’s South End.

“I do fluff,” Joan Phelps once told a writer for the Albany Times-Union. “I don’t like drama. I love musicals and comedies.”

To a degree, her son agrees. “I don’t want to do soap-box theater,” he said. Still, The Theater Barn has not shied away from challenging its audiences. The theater has produced Stephen Sondheim’s “Sweeney Todd,” James Lapine and William Finn’s “:Falsettos,” Kander and Ebb’s “Kiss of the Spider Woman,” Andrew Lloyd Webber and Tim Rice’s “Evita,” among others. Phelps mentioned that, at one point, he and Bliss considered producing “The Laramie Project,” about the community reaction to the brutal murder of a gay University of Wyoming student, this season.

“I don’t always want to do the ‘tourist’ shows,” Phelps said. “I want to take risks.”

Among the small changes this year is the performance schedule. Phelps is introducing a second-Thursday matinee for most of the shows. In addition, instead of only four days, there will be a 10-day gap between the close of one show on a Sunday afternoon and the opening of the next show on a Thursday evening to allow for thorough cleaning and airing of the theater between productions — a bow to COVID safeguards. In another COVID safeguard, all performances, with the exceptions of Thursday matinees and Saturday evenings, are open to vaccinated theatergoers only. On Saturday evenings and second-week Thursday afternoons, fully vaccinated audience members will be seated on one side of theater; partially and non-vaccinated theatergoers on the other side.

The Theater Barn is a non-Equity house, but the safeguards put in place by Actors Equity Association, the union representing the country’s professional actors and stage managers, are serving as a guideline for rehearsals and staging.

All of the theater’s staff and artists have been fully vaccinated.

“Our first priority has been to keep actors, staff, audiences safe,” Bliss said.

“At every turn,” Phelps said, “we kept asking ‘should we be doing this?’”

Phelps holds degrees from Berkshire Community College, College of St. Rose, and Emerson College. Over a period of 27 years, he has taught theater, English and special education, chiefly in the Boston area; returning to The Theater Barn in summertime, where he has acted, directed, been technical director and, for the past several seasons, the Barn’s artistic director.

For all the “small” changes he and his associates are considering, Phelps said that some things, fundamental things, won’t change. First, and perhaps foremost, is a sense of community, something that was “first and foremost” for his parents, Phelps noted in an email.

To that end, Earle said, it was important to take care of the Barn’s audience base; make it relatively easy for ticketholders to transfer their tickets from the canceled 2020 season to this season; keep them abreast of all the changes. “We want to make them comfortable,” he said.

Also paramount is taking care of the theater’s artists.

He says the greatest lesson he learned from his parents is “to empower your talent and allow them the freedom to make artistic choices they were hired to make,” Phelps said via email.

“The theater operates by those we hire. Stage management, designers, directors and actors are given a safe place to create their shows and will continue to be supported by the administration just as in the past under mom and dad.”

With theatergoers facing a variety of choices in a crowded summer theater market, Phelps, his parents and his artistic associates are clear about the niche the 136-seat Barn has carved for itself. Phelps likes to describe The Theater Barn as “the best of Broadway and beyond at the base of the Berkshires,” a theater, he said, that produces “high-quality shows that are affordable and family-friendly fun for all.”

It seems to have been a winning formula.

Phelps said ticket sales are running ahead of last year before the season was canceled.

“We have people who come every year,” Phelps said.

“We have audience members who … see everything; some who come and see only the Agatha Christie,” said Earle. “It’s a matter of knowing the audience.”

At the same time, Phelps acknowledges The Theater Barn needs to grow. To that end, he sees extending the Barn season into fall and early spring by producing shows and cabarets in various venues throughout the region. He also would like to make the Barn available to area schools for their own productions.

The Theater Barn 2021 season at a glance

June 3-6 — “We the People” by Harrison Zeilberg (staged reading)

All performances, except for 2 p.m. show on Thursdays and 8 p.m. shows on Saturdays. are for fully vaccinated ticket holders only. Visit Theater Barn COVID-19 Info page for full details.