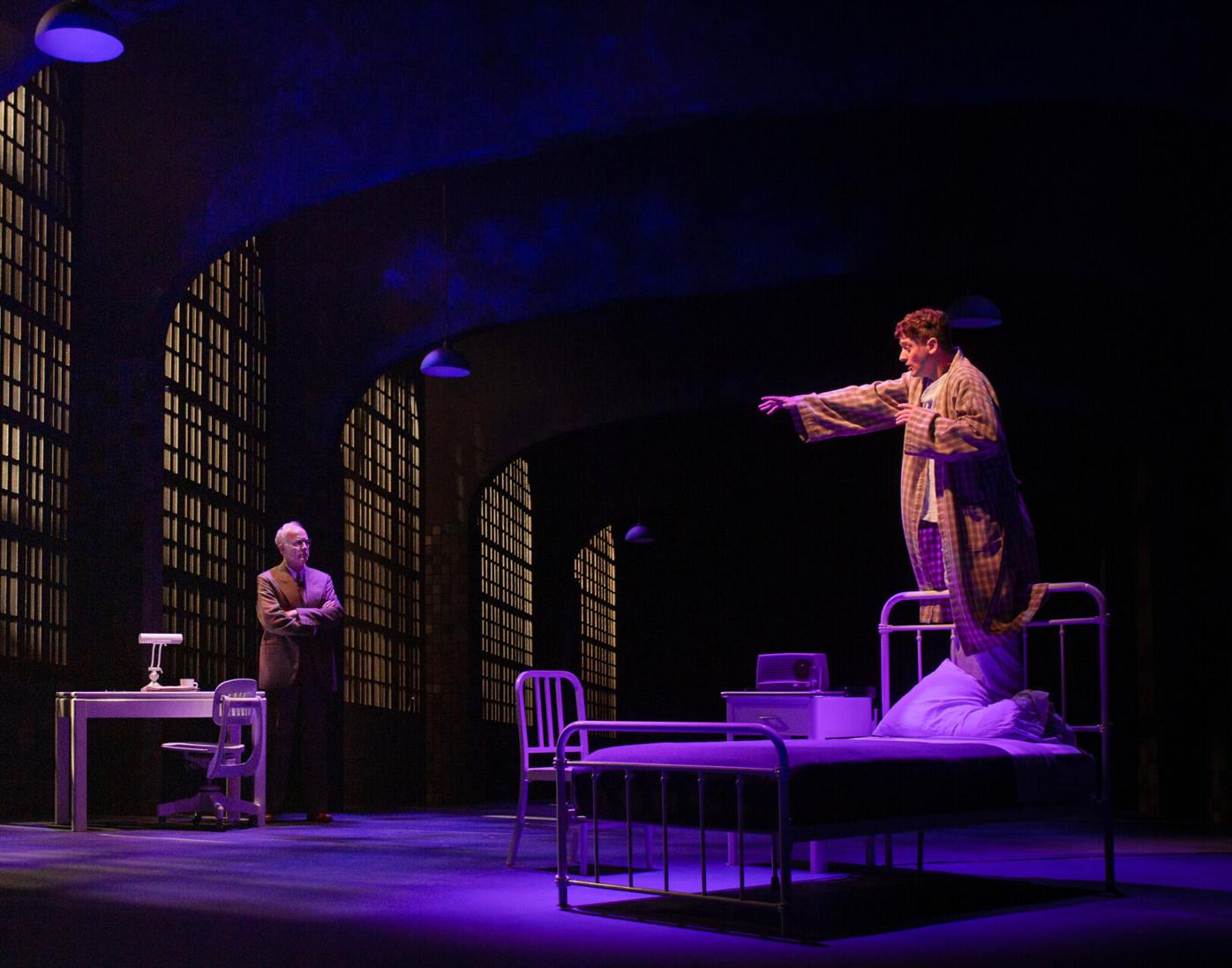 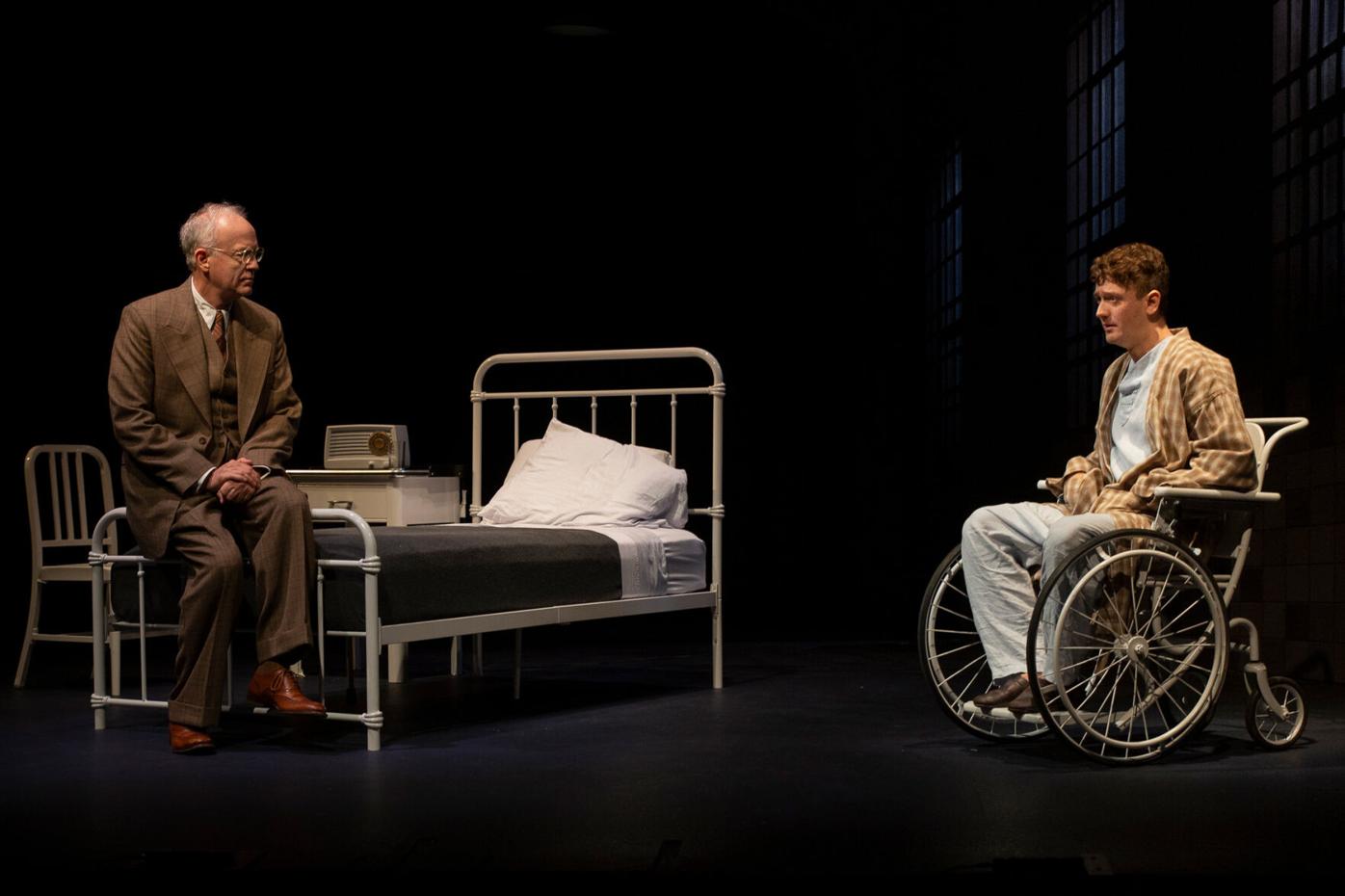 PITTSFIELD — The setting for Joseph Dougherty’s haunting, compelling play, “Chester Bailey,” is a hospital on Long Island in 1945. The focus is a room — a bed, a chair, a night table, a wheelchair.

As designed, by Beowulf Boritt, for the smooth, expertly crafted production “Chester Bailey” is being given by Barrington Stage Company at its Boyd-Quinson Stage on Union Street, the room is an island of modest light at the forefront of window-lined structure that stretches in tunnel-like fashion into a depth the theater’s stage seems only to have just uncovered.

Boritt, lighting designer Peter Kaczorowski and sound designer Brendan Aanes have provided a landscape of the mind for a play that is, among other things, very much about journeys from darkness to light.

Chester Bailey (played by Ephraim Birney with raw passion, urgency and conviction) is an ingenuous 23-year-old employed as a riveter at the Brooklyn Navy Yard. One day in November 1944, while working along the keel of a minesweeper, Bailey and three co-workers are attacked by a fourth worker who comes after Bailey and the others with an oxyacetylene torch. One of Bailey’s friends dies at the scene. The attacker destroys Bailey’s eyes, his right ear and both hands, which eventually are amputated above the wrist. Bailey is given no chance to survive. He defies expectations and survives. More than that, when the doctors tell Chester that he is blind and has no hands, he refuses to believe them. He claims to experience sensations — perceptions of light, a painting, people; and touch, actual contact with his hands.

Bailey believes that what happened on that consequential day was that a hot rivet was dropped into a vat of varnish and the whole thing “went up like a bomb.” He is, in many ways, a model of raw, unvarnished ingenuousness.

With his brain, his imagination, “Chester was creating a visible world for himself,” says his treating physician, Dr. Cotton (played by Ephraim Birney’s real-life father, Reed Birney, with a low-key clinical efficiency that belies the unfinished business, the failures in Cotton’s personal life). “We get raw information through the eyes but it’s the brain that interprets what we see. Chester’s brain was doing that without the benefit of actual visual information. …

“He constructed a credible setting then filled in the rest with intelligent guesswork. … His ‘hands’ could touch what his ‘eyes’ could see.”

“I didn’t want him,” says Cotton, who has come to Walt Whitman Hospital on Long Island from a facility in Washington, D.C. where he was treating shell-shocked soldiers returning home from the Pacific front.

“I tried … to take that look out of their eyes. That look acquired in the jungle. My successes were ‘limited.’ … I came to Walt Whitman to get away from that sort of thing,” he says.

Reed Birney’s Cotton is a modest unassuming figure who wears wire rim glasses and a well-worn three-piece tan suit. Divorced and the father of a daughter who lives in New York, Cotton has drifted into an affair with his boss’s wife, which they carry out in any number of Long Island motels. As a clinician, however, he is smart, cagey, resourceful. His job is to convince Bailey of the truth of his condition. His skills are a challenge to Bailey whose constructed reality stands in stark contrast to the near sordid reality of Cotton’s life and the hard, often brutal realities of the world outside Bailey’s delusions.

Bailey is buoyed in part by memories of dancing under the purple lights of a popular neighborhood dance hall, Luna Park, with a former girlfriend. Bailey’s strong lifeline, however, is a nameless young woman who works at a newsstand in the concourse at Pennsylvania Station from whom he bought chewing gum. Her only words to him, “Here you go,” as she gives him the gum, resonate profoundly.

Indeed, in his world, she comes to his room over the course of several nights and engages in oral sex with him; a delusion that is grounded in a cruel reality.

In terms of both physical movement and its evocative use of lighting, sound and set, director Ron Lagomarsino’s production is, on the whole, as deftly orchestrated as Dougherty’s writing and feel for structure is masterly. Dougherty cannily avoids leading his characters, and his audiences, down familiar, well-worn paths. In “Chester Bailey,” he’s given us a sublimely nuanced, richly layered play that speaks in decidedly non-mawkish ways to the remarkable healing capacities of soul, spirit and mind under extraordinary circumstances.

What: “Chester Bailey” by Joseph Dougherty. Directed by Ron Lagomarsino