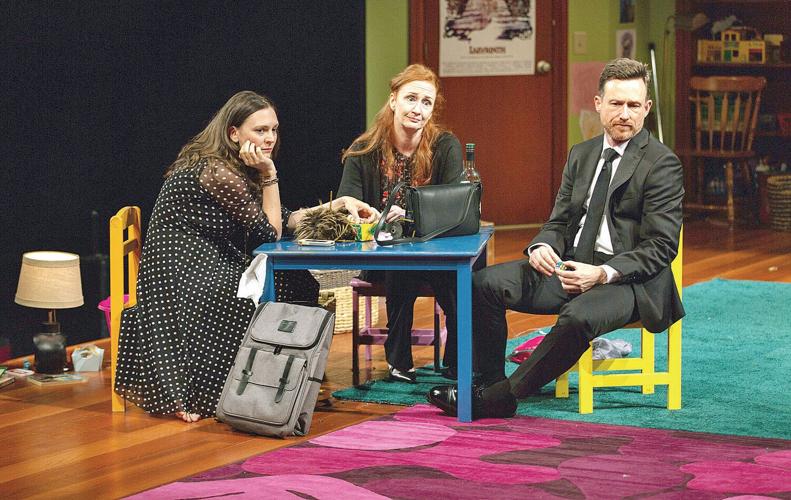 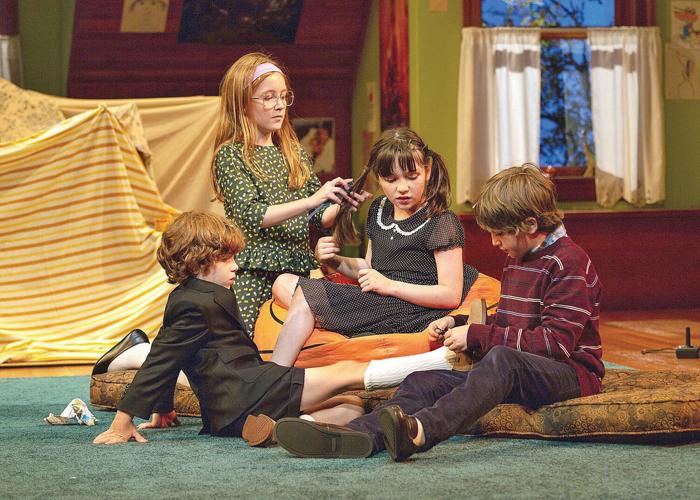 HARTFORD, Conn. — "This tastes like s----!" the "man" of the household says, slamming his dish on the table.

"That's because it is," the "wife" defiantly snarls in reply.

It's an exchange that's as gross and blunt as it sounds. It comes midway through the first section of Bess Wohl's fascinating, if uneven, black comedy, "Make Believe," which is having its world premiere in an evocatively mounted, impeccably acted and directed (by Jackson Gay) production at Hartford Stage.

The exchange draws thunderous laughter from the audience, principally because the words are coming from the mouths of as 10-year-old boy and his 9-year-old sister. Beneath the laughter is the painful realization that the boy, Chris Conlee, and his sister, Kate, are aping the horrifyingly abusive relationship between their absent parents — a father who is on a business trip in Texas and a mother who has simply disappeared, leaving Chris, Kate and their younger siblings, 7-year-old Addie and 5-year-old Carl, at home on their own in a landscape that is uniquely their own — a playroom (splendidly designed by Antje Ellerman).

"Make Believe" begins as audience members make their way to their seats — a playful idyll. Addie (a wonderful Alexa Skye Swinton) is writing away devotedly in a book at a small table, which she eventually abandons for a big bean bag on the floor on the opposite side of the room where she occupies herself with two dolls. Two of her siblings, each covered head to toe in a sheet with pinholes for the eyes — scamper across the rear of the playroom in one door and out the other; reappearing a few moments later scampering back the way they came.

The first voice we hear is Chris (played perfectly by Roman Malenda in all his bullying splendor), bellowing for his mom from outside the room, bursting in kicking and bouncing a soccer ball, throwing a full-blown tantrum at the absence of his after-school after-soccer-practice snack.

Chris presses his siblings into let's-play-house mode. Kate (a revealingly bookish and fiery Sloane Wolfe) is given the role of mother. Addie (beautifully rendered by Alexa Skye Swinton) is pushed into the role of the baby of the family, and the youngest, 5-year-old Carl (nicely, charmingly played by RJ Vercellone) is relegated to the role of the family dog.

It's not a pretty sight. Wohl writes with humor but there is pain beneath the laughter. The marital portrait that emerges through this child's play is brutal and horrifying.

In the absence of their parents, Chris acts out — at home and in school. He comes home with cash in his pocket and bags filled with an abundance of groceries. And when Kate questions him about the source of the money and the groceries, Chris is, at best, evasive.

And for all his bullying, Chris emerges as a protector. An underlying bond of affection and innocence among the four emerges when their child's play lifts them out of Earth's orbit into outer space. There, in a truly magical sequence, the Conlee children find a peace and harmony they do no find on Earth.

As the play's first section winds down, Chris prepares his now dressed-up siblings to go out.

"It's going to be OK," Chris tells Kate, Addie and Carl with sincere reassurance. "This is just our childhood. We are not even going to remember most of this stuff when we grow up.

"We're going to grow up and move on and get our own lives and none of this stupid stuff is going to matter. We just have to get through this and get to be grown ups and then everything is going to be amazing."

And then, in the space of a smooth, seamless intermission-less transition, "Make Believe" moves 30 years later into the present. Kate (an affectingly wry Megan Byrne) is now a gastroenterologist living in Seattle. Carl (a pitch-perfect Brad Heberlee) sells security systems. Addie (an insightful, by-turns sexy, witty, certain, uncertain Molly Ward) is a single mother living in Los Angeles where, as an actress, she has a continuing role as a DNA analyst on a cop series. We first we see her emerging from a huge fort the Conlee kids had created and which still stands, followed not long after by a 22-year-old bisexual also named Chris (an adept Chris Ghaffari), who works as a desk clerk in a health club where the adult, now deceased Chris Conlee worked as a trainer. His sisters and brother have come home for a memorial service and to scatter Chris' ashes in the back yard of the family home. They have drifted up, not together, to the playroom.

Carl, who was to have delivered some comments at the service is the last to arrive, his flight having been delayed by fog. He comes into the playroom, talking with a business associate on his Bluetooth; dressed smartly in a dark business suit. The Carl who said virtually nothing in childhood now has a lot to say, and not only to an associate. He delivers to his siblings, and Chris, the speech he had prepared. Structurally, the speech ties up ends that Wohl intentionally left loose at the end of the first section. What Carl's speech doesn't fill in gets filled in in other ways.

There is a particularly affecting moment, late in the play, when Kate, Addie and Carl are sitting together around a table they have overgrown. The bond, the tie, the connection among them, on Earth this time, is palpable.

The Conlees have survived into adulthood. They have, indeed, each made a life for themselves; become grown up but, Wohl suggests, at a price.

"Make Believe" frequently struggles against itself, particularly in its first section; seemingly getting stuck as it plays variations on a theme before moving forward. But the structure is compelling and in both the writing and the playing, the characters — kids and particularly adults — are rich in dimension and nuance.

Ironies abound, nowhere more than the play's title. But without sentimentalizing, Wohl's view here is hopeful; human. One ghost materializes near the end. It's a vision that is meant to throw things just a bit off balance for us and for the adult Addie. But the continuing interplay between ghost and adult plays out in a manner that embraces a vision that is anything but make-believe.