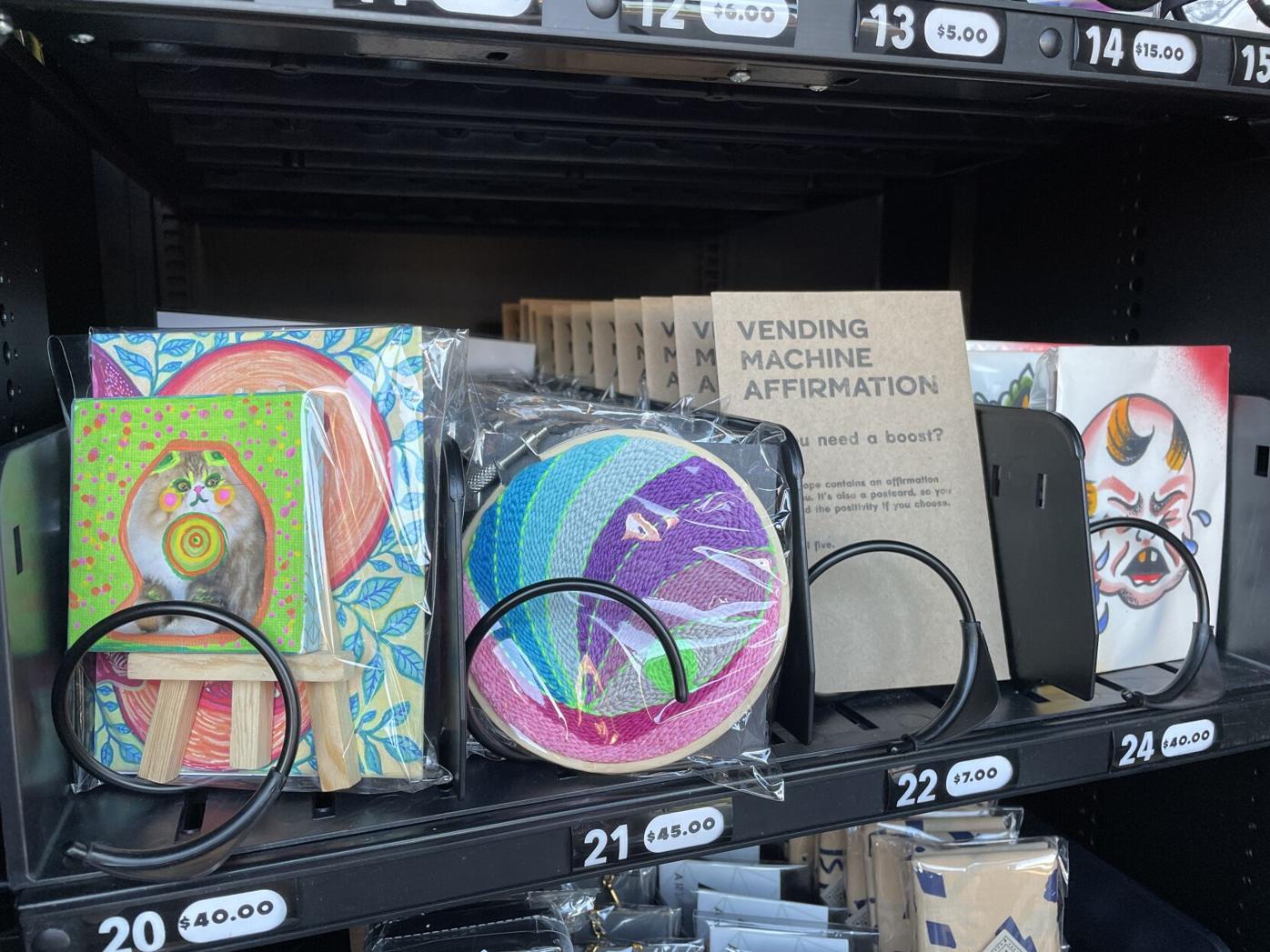 Art works featured within the AVNA vending machine range in price from $2 to $50. 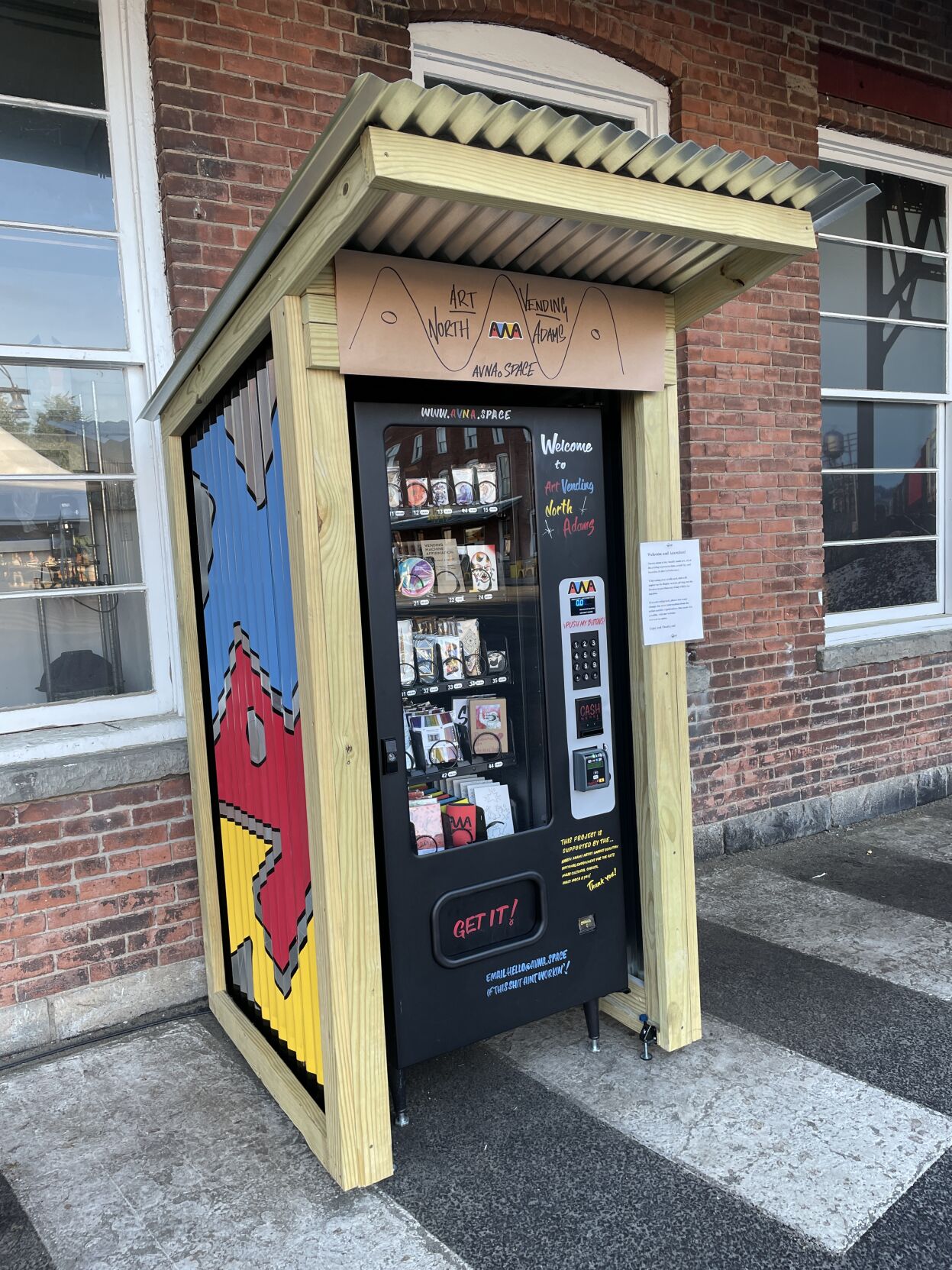 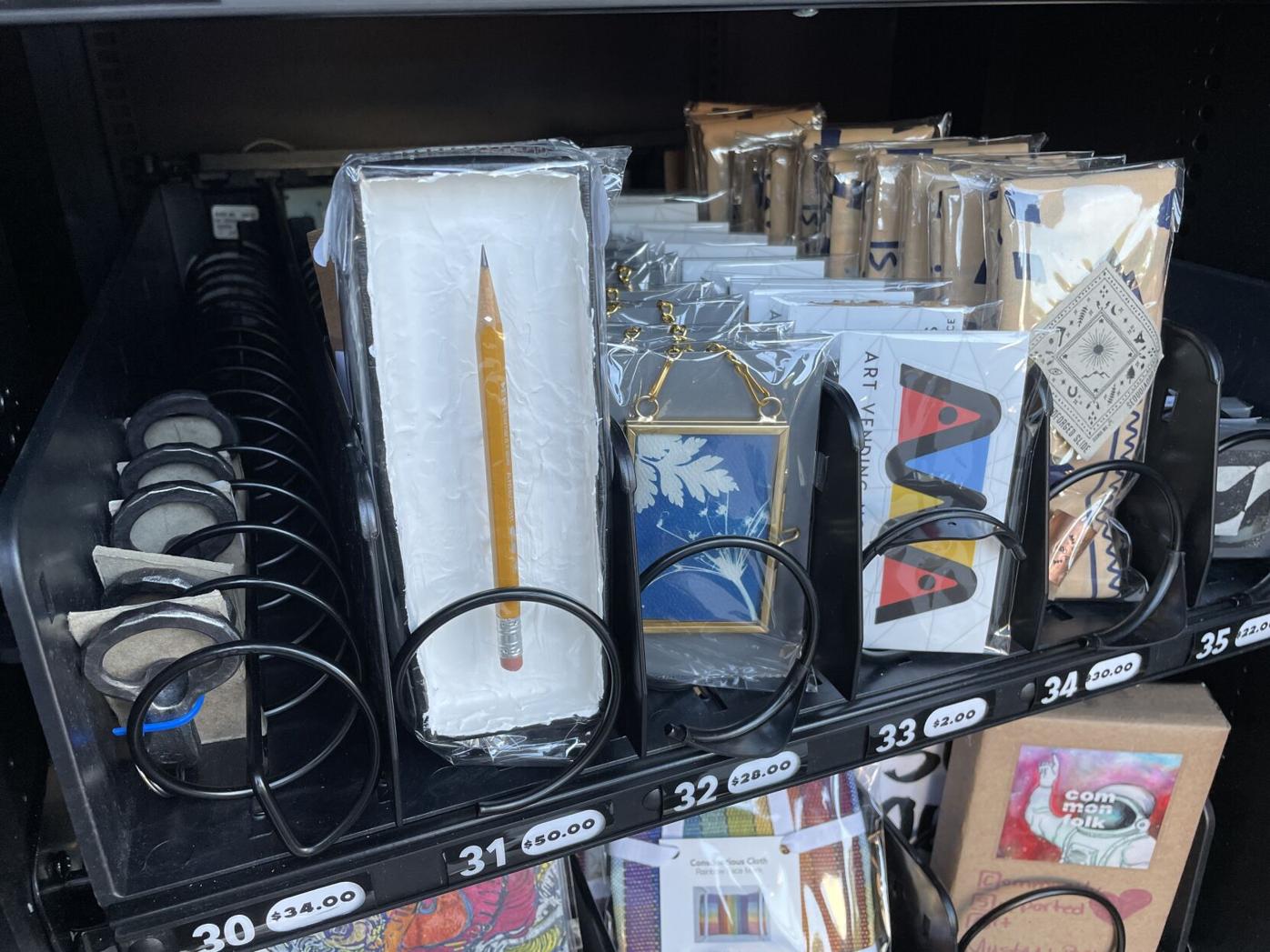 You can purchase works by local artists from a vending machine located in the main courtyard at Mass MoCA. 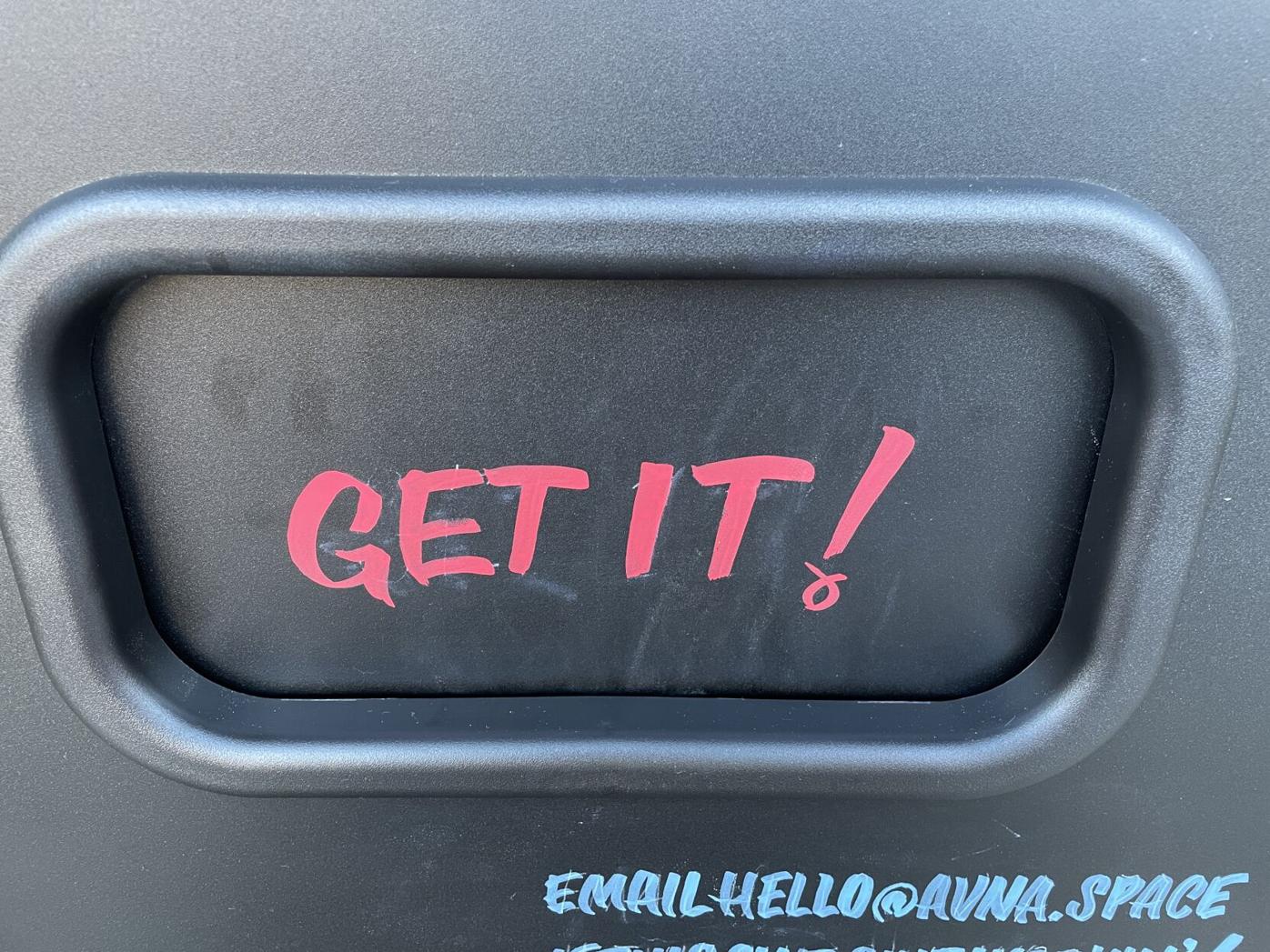 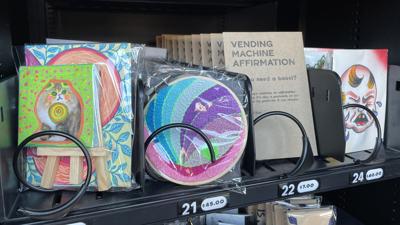 NORTH ADAMS — Soda, candy and chips are all staples of a typical vending machine. But what if those items were replaced with small pieces of art?

And, what if the vending machine was placed on the Massachusetts Museum of Contemporary Art's campus?

That vision  — originally proposed by artist Nico Dery — is now a reality, and Berkshire tourists and residents alike have been engaging with the project, called Art Vending North Adams (AVNA), since its debut Memorial Day weekend in Mass MoCA's Courtyard A.

Dery first proposed the idea for a vending machine last year, when the North Adams Artist Impact Coalition sent out a call for grant proposals that would help benefit artists living and working in and around North Adams.

“I sat down and I thought, well, what is something that most artists need?” Dery said. “And the two things I came up with were health care and money, and so I figured I can’t do a whole lot about the health care situation, but maybe I can figure out a creative way to put more money in the hands of artists.”

Dery said the idea for an art vending machine immediately popped into her head. She drew inspiration from similar art vending projects, such as Art-o-mat, which launched in 1997 as an initiative by artist Clark Whittington to repurpose cigarette vending machines to vend artwork as the machines were  being banned across the United States.

“I just thought that it could be a cool, creative, accessible way to bring art to residents and tourists visiting North Adams,” Dery said.

The North Adams Artist Impact Coalition accepted Dery’s grant proposal for AVNA in October, when the world was still in the thick of the COVID-19 pandemic, and she went ahead with the project. “For me, at the time, it was a way that we could bring art in a no-contact way to people,” she said. “That was a big part of the initial concept. But now, as the dialogue is evolving and we’re sort of entering a post-COVID world, it’s fun, [and] it’s accessible.”

At first, Dery did not know where the vending machine would end up. But after Mass MoCA’s Assets for Artists team suggested the Mass MoCA campus as a home for the project, Dery spoke with Tracy Moore, the interim director of the museum. The next thing she knew, her project was being placed in Courtyard A, right next to Tunnel City.

“It’s a really great way to get local artists on the Mass MoCA campus,” Dery said. “Every person who enters the museum essentially is walking by the art vending machine and can engage with local artists, so I think it’s important in bridging that gap.”

The vending machine includes a wide variety of artwork made by over 20 local artists, which range in price for $2 to $50 (the vending machine accepts cash/debit and credit cards). Pieces include small paintings, drawings and sculptures, as well as more craft-based items, such as hand-forged iron bottle openers made by blacksmith Ben Westbrook and hand-woven masks made by textile artist Megan Karlen.

“It’s a real blend of the local creative community,” Dery said. “We’re not just focusing on one or two mediums. That was important to me, that it wasn’t just about a certain type of art — that we were capturing the creative community as a whole.”

Interdisciplinary artist and designer Amy Coon created a custom risograph printed piece for the art vending machine called Art Vending Machine Affirmations. Every card has a unique affirmation printed on it, but the customer has no idea what their card will say.

“All of them are inspirational, but many have an edge to them — a little sass,” Coon said. “We all could use some encouragement, especially after this past year, and I hope that this project brings some inspiration, or at least a laugh, to those who purchase my piece.”

At first, in order to acquire such a wide variety of artwork, Dery reached out to a handful of local artists to gather some excitement about the project. Coon, for example, heard about the project through social media. Once Dery realized that many artists were interested, she created a submission form on her website.

Dery received so many applications from local artists that she is currently taking a break from accepting applications, but her plan is to reopen submissions at the end of June, and as space becomes available in the vending machine, she will cycle new artists into the machine.

“At first I was a little worried because I think I had an original deadline of March 1 and I was really short on applications and then I think I extended it to March 15 ... but then I got a ton of submissions at the last minute, so that was very exciting to me,” Dery said. “I wasn’t quite expecting that.”

In addition to the huge amount of interest from local artists, many Mass MoCA visitors have been engaging with the AVNA project since it launched. “The first weekend we opened, Memorial Day weekend, I kind of camped out and stuck my head out every hour or so and there was always a group of people around the vending machine,” Dery said. “We had really great sales that opening weekend, that I was totally blown away by.”

“I’m hoping [Mass MoCA visitors] are visiting the website and learning more about the artists, because essentially it’s about connecting the public to these artists,” Dery said. “Hopefully they’ll buy something, maybe on [an artist’s] website.”

Coon said the most fun part of participating in AVNA has been seeing customers post on social media with her artwork. “Artists don’t always get the enjoyment of watching people interact with their work, so when we do, it’s rewarding,” she said. “I’m always so grateful when a customer is excited enough that they want to share my work on their social media and connect with me about it.”

As for what happens to the money that the vending machine collects, Dery said that the majority goes back to the artists themselves. Inevitably, around 6 percent goes to credit card processing fees, but the rest of the money goes back to the project to help make it sustainable.

Dery said the money that goes back to the project goes toward the cost of desiccants that keep moisture out of the machine, and the money also covers the cost of items that accidentally double vend or get stuck in the machine.

For Dery, the hardest part of the project was figuring out the ins and outs of the actual vending machine, which was originally a snack vending machine and has not been repurposed in any way.

“Sometimes I would put art in there and it would take out other art on the way out,” she said. “That is something I’m still learning. Everything has been a learning process.”

Coon, for one, said that the limitations on the kind of art that could feasibly fit into a vending machine slot actually inspired her. “The challenge of size restrictions, fragility and packaging created interesting limitations that helped me to narrow down what could have been an infinite scope of work,” she said. “Art is so vast that these parameters were actually helpful.”