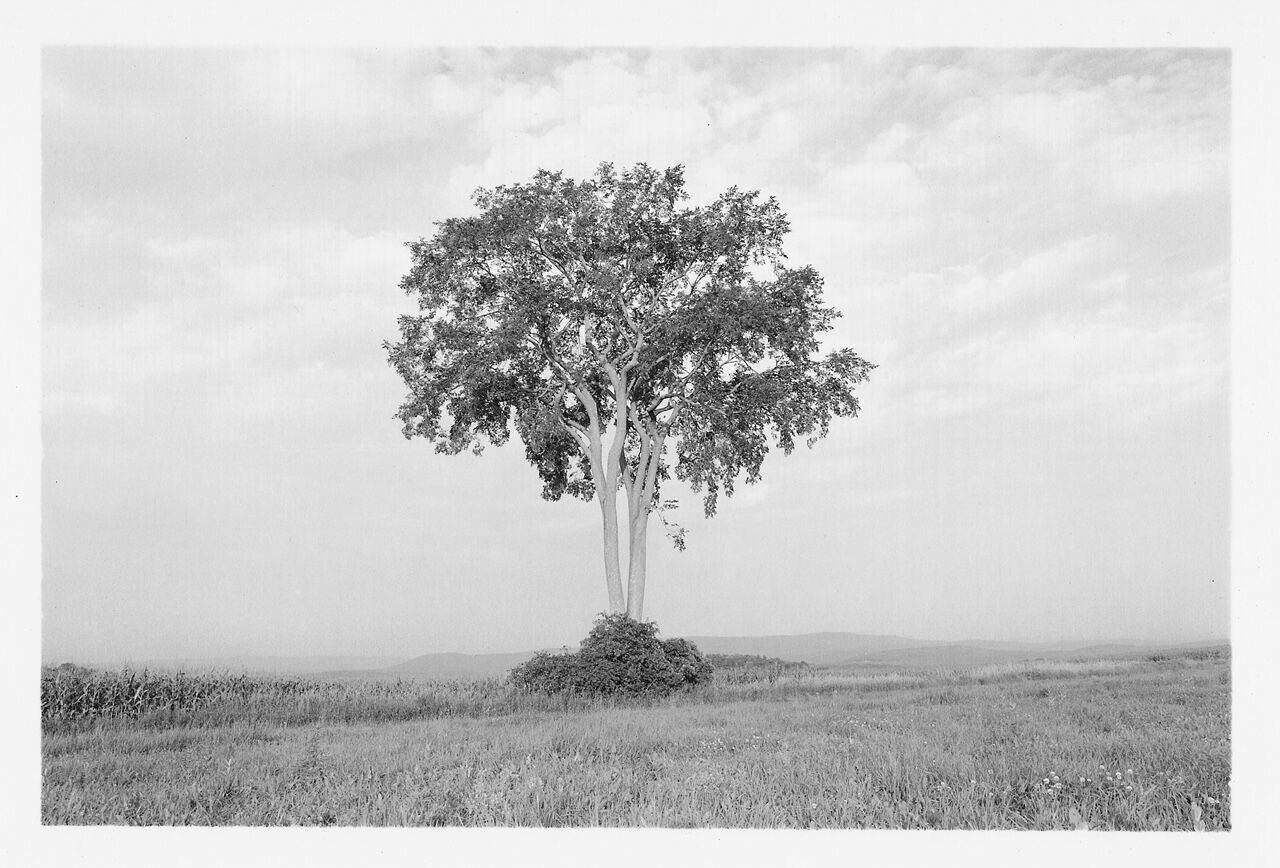 "American Elm, Summer, 1993," gelatin silver print, by Tom Zetterstrom, is one of four seasonal photos of the Baldwin Hill Elm in Egremont. 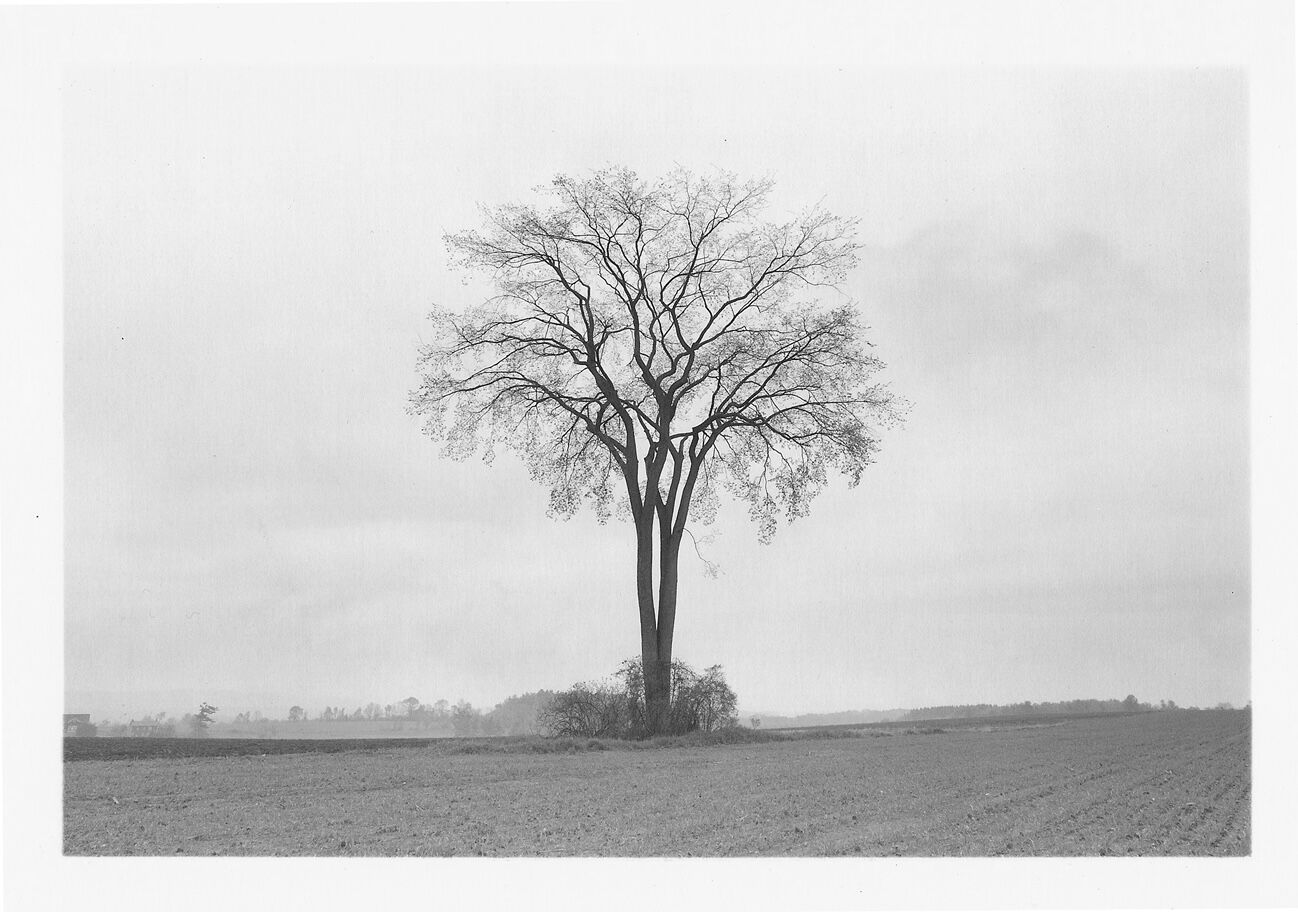 "American Elm, Spring, 1997," gelatin silver print, by Tom Zetterstrom, is one of four seasonal photographs taken of the Baldwin Hill Elm in Egremont. The photographs are part of "Portraits of American Trees" on view through Oct. 31 at Berkshire Botanical Garden. 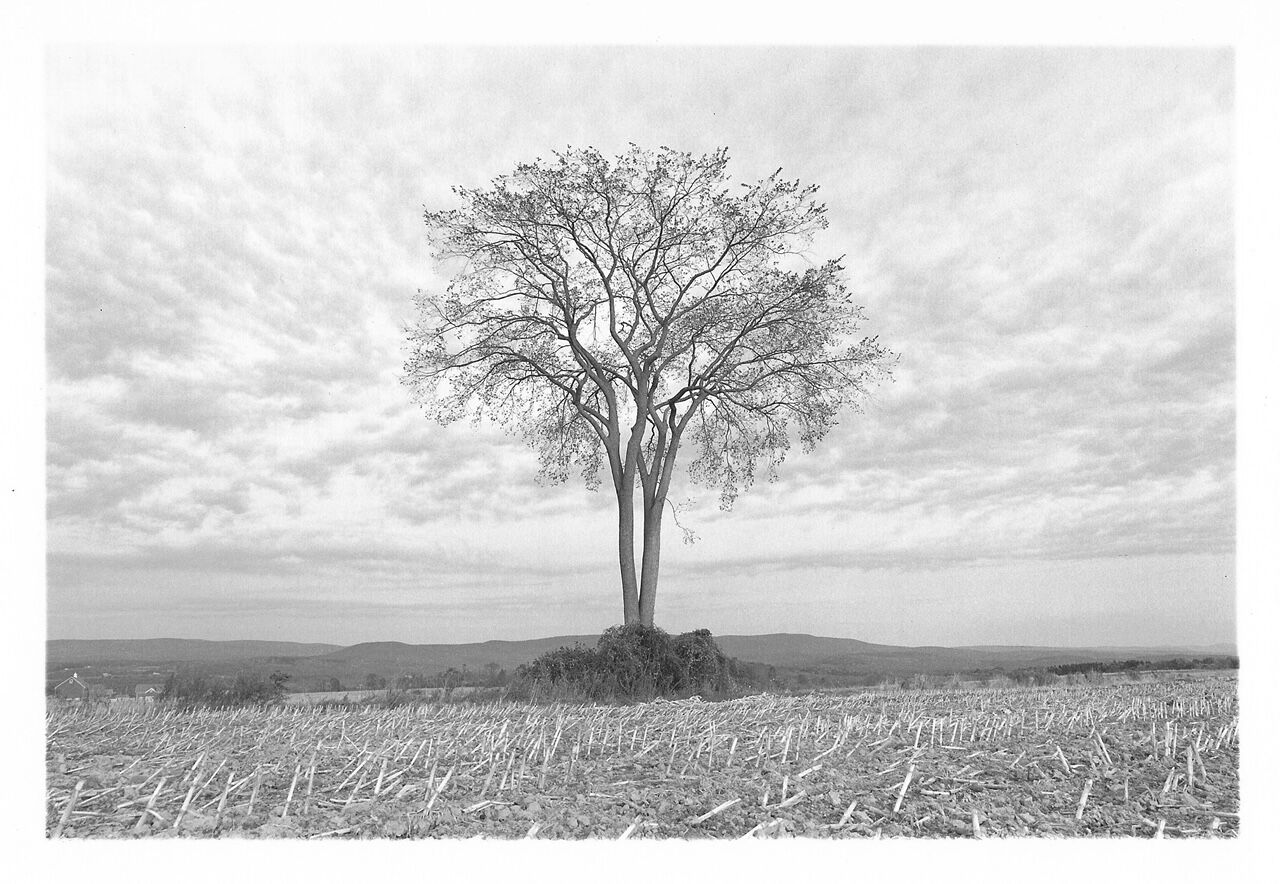 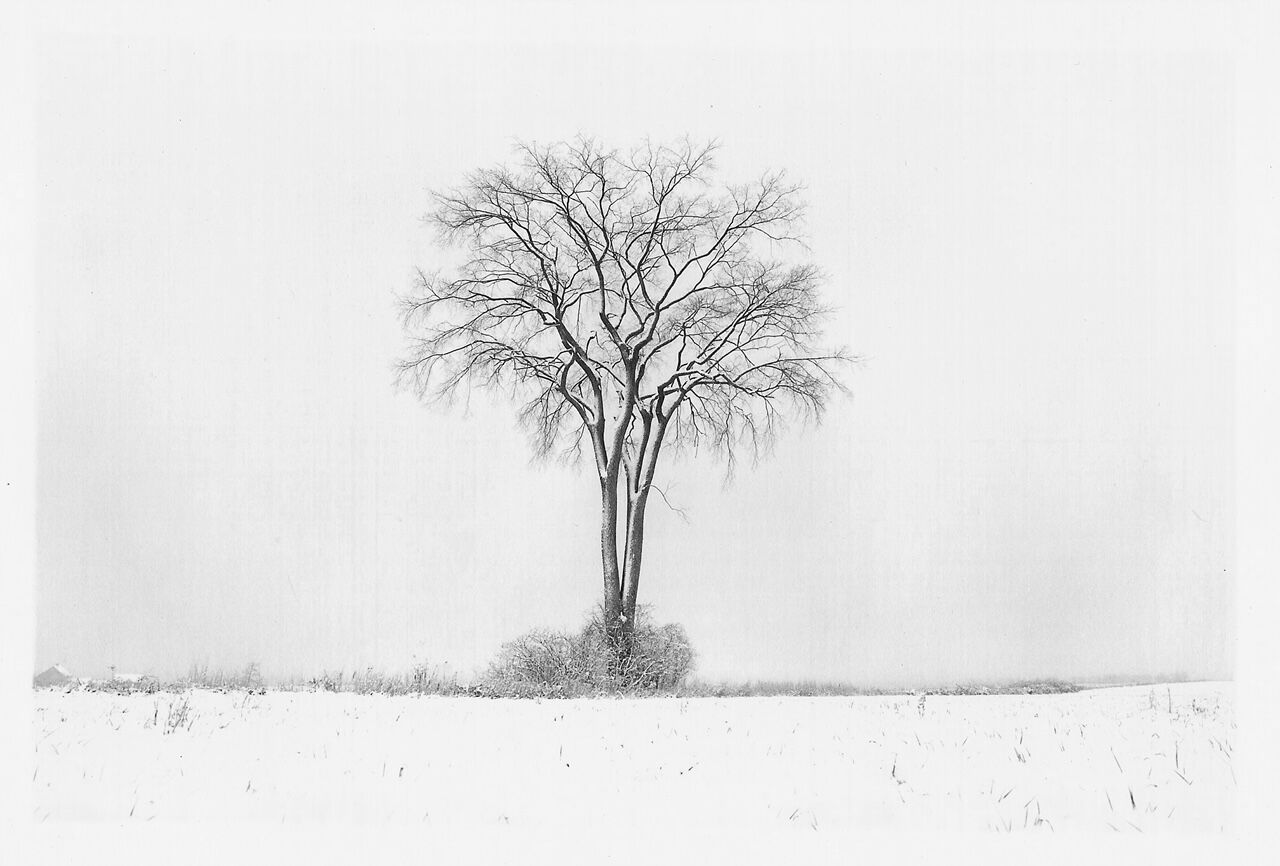 "American Elm, Winter, 1994," gelatin silver print, by Tom Zetterstrom, is one of four seasonal photographs of the Baldwin Hill Elm. The series of four photographs was acquired by the Library of Congress.

"American Elm, Spring, 1997," gelatin silver print, by Tom Zetterstrom, is one of four seasonal photographs taken of the Baldwin Hill Elm in Egremont. The photographs are part of "Portraits of American Trees" on view through Oct. 31 at Berkshire Botanical Garden.

"American Elm, Winter, 1994," gelatin silver print, by Tom Zetterstrom, is one of four seasonal photographs of the Baldwin Hill Elm. The series of four photographs was acquired by the Library of Congress.

The Canaan, Conn.-based photographer has spoken for trees of all shapes and sizes for over four decades, with his photographs and as a political activist and conservationist.

Portraits of American Trees: The Photography of Tom Zetterstrom

Companion talks, lectures and workshops at the Berkshire Botanical Garden by Tom Zetterstrom:

Portraits of American Trees, with notes on art, horticulture and forest habitat

Since the 1970’s Tom Zetterstrom has photographed trees throughout the Northeast and from coast to coast. Learn more about seeing trees in black and white, and the art of tree photography.

Defeating Japanese Knotweed on the Wild and Scenic Housatonic

Knotweed rapidly forms monocultures, excludes all native plants in its wake, while canceling the rich interactive diversity normally associated with riparian ecosystems. Learn how a consortium of environmental organizations and land trusts demonstrated effective knotweed eradication methods and restored native plants on the banks of the Wild and Scenic Housatonic in northwest Connecticut.

History and Preservation of the American Elm in New England

Tom Zetterstrom initiated Elm Watch in 1999 to protect the Baldwin Hill Elm from the threat of Dutch elm disease and launched a regional effort with Tim Abbott of The Nature Conservancy to “adopt” specimen elms in our tri-state region. Several of these elms remain on the landscape. National Arboretum research on disease-resistant elm cultivars in 2001 prompted elm restoration nationally. Learn what elm cultivars performed well and how to reduce the risk of Dutch elm disease.

Bittersweet, the tree-killing vine, can undo a century of forest succession in a generation by strangling, encapsulating and collapsing trees, resulting in a dramatic reduction of carbon sequestration and ecosystem services. Learn how land trusts, parks and campuses are efficiently and effectively defeating invasive vines and shrubs, maintaining trails and restoring inherent beauty and balance to natural areas. Talk is followed by an invasive identification and management workshop.

Tom Zetterstrom was a major contributor of photographs and text for the widely respected "Pruning Young Elms" manual published by the University of Minnesota in 2009. He has lectured on elm pruning throughout the Northeast. This talk is designed for arborists, tree wardens, arboretum directors and staff and nursery and landscape professionals, and will provide Continuing Education Units. A hands-on pruning workshop by arborist Kieran Yaple of Race Mountain Tree Services will follow the talk. Kieran will prune the Berkshire Botanical Garden’s Princeton American elm, which was planted in 2003.

"We're at the stage in life, where these bodies of work represent a significant part of my history and a span of time and an amazing consumption of energy," Zetterstrom said during an interview at the Berkshire Botanical Garden's Leonhardt Galleries, where he's showing "Portraits of American Trees."

The show — a collection of 30 silver gelatin prints from his portfolio of American trees and several sprints from his series, "Moving Point of View" — is on view through Oct. 31.

"They both evolved as separate series in the early 1970s. By 1979, I had established 'Portraits of Trees' as a series, a portfolio, and that's when I had my first show, 'Portraits of Trees,' in Washington D.C.," he said. "We're talking about almost half-of-a-century ago."

His love of trees began early on, as a child, growing up on a 60 acres of woodland in Canaan.

"The trees emerged from my background as a kid, hiking around the woods and being a Boy Scout and eventually, working for my father who was an arborist. We paid a lot of attention to trees, professionally, and that was my playground outside of the house," Zetterstrom said.

After high school, he attended Colorado College, where he studied sculpture and graduated with an arts degree. He attended the Pratt Institute and then taught photography in Washington D.C. in the late 1960s.  In April 1970, he returned to Canaan.

"It was right in time for the first Earth Day. I took up residency in a cabin. I went from my urban street photography to the woods and I've been there ever since," he said. "Living in that cabin, I stepped out on my porch and I was surrounded by trees. In my early shots, I'd be walking in the woods — my father loved walking in the woods — so I'd eventually be out there."

Those early photos were a lot of trial and error — just taking photographs and later, selecting interesting shots from the contact sheet. "I didn't have a grand scheme. I just kind of went at it kind of instinctually. Trial and error and random exploration of error were probably my two guides."

The strength of "Portraits of American Trees" is in its diversity of trees, over 30 species are represented, Zetterstrom said, naming the trees in his portraits while passing them: "White oak, Eastern cottonwood, blue spruce, cherry, birch, maple, yellow willow, black spruce, American elm ..."

It was during this time he established his signature style of photographing trees — a tree isolated from its surroundings. The images, always printed from black and white film, are delicate, evoke a sense of intimacy and most times appear, at first glance, to be hand drawn works instead of photographs.

Through the 1970s, he built a portfolio from tree to tree, he said. In 1976, a photograph of the Housatonic wetlands and an early photograph from "Moving Point of View" were among three pieces of his work purchased by the Metropolitan Museum of Art in New York City. Other museum acquisitions followed.

"It's not like I had a business plan. I was exploring the landscape. I had been doing photography since I was in high school," he said.

At the same time as he was establishing a reputation as a fine art photographer, Zetterstrom was taking a series of photographs, not as part of an art project, but as part of a campaign against the Super 7 express highway, planned to run from Norwalk, Conn., along Route 7 straight through Massachusetts and Vermont to the Canadian border.

Zetterstrom photographed the trees and environment along Route 7, from his moving car, during this time period. Those photographs would eventually becoming the series, "Moving Point of View."

"Basically, I went from political activism to fine art in this series and in a sense, in the opposite direction with the trees. With the trees, I went from an artistic pursuit that  transformed into community forestry and elm advocacy and so forth," he said.

His work with trees, especially a series of American Elms, began his conservation work in the Berkshires.

"I photographed the Baldwin Hill Elm in Egremont in 1993, 1994, 1996 and 1997 and put it together as a series that I called 'The Elm in Four Seasons.' The Library of Congress bought the set, as did the Boston Public Library. [The American Elm] is an incredible tree. It's the Massachusetts state tree," he said. "The one on Baldwin Hill is exceptionally beautiful."

It was under the branches of the Baldwin Hill Elm that Zetterstrom and Tom Abbott of the Nature Conservancy launched Elm Watch and its "Adopt An Elm" program. The Elm Watch group monitored both healthy and sick elms for Dutch Elm disease, while the adoption program found sponsors to care for American elms with injections that keep the trees healthy. The Baldwin Hill Elm was adopted by and still cared for by the Haupt Tree Company. The Berkshire Natural Resources Council has since conserved the farm land around it.

Although Elm Watch is no longer active, Zetterstrom said the elm adoption program still survives in many of the 22 communities touched by the nonprofit. King Elmer, the champion American elm in Lanesborough, he said, is an example of those early efforts being embraced by the larger community.

And that's a good thing, because, trees need many people to speak for them.