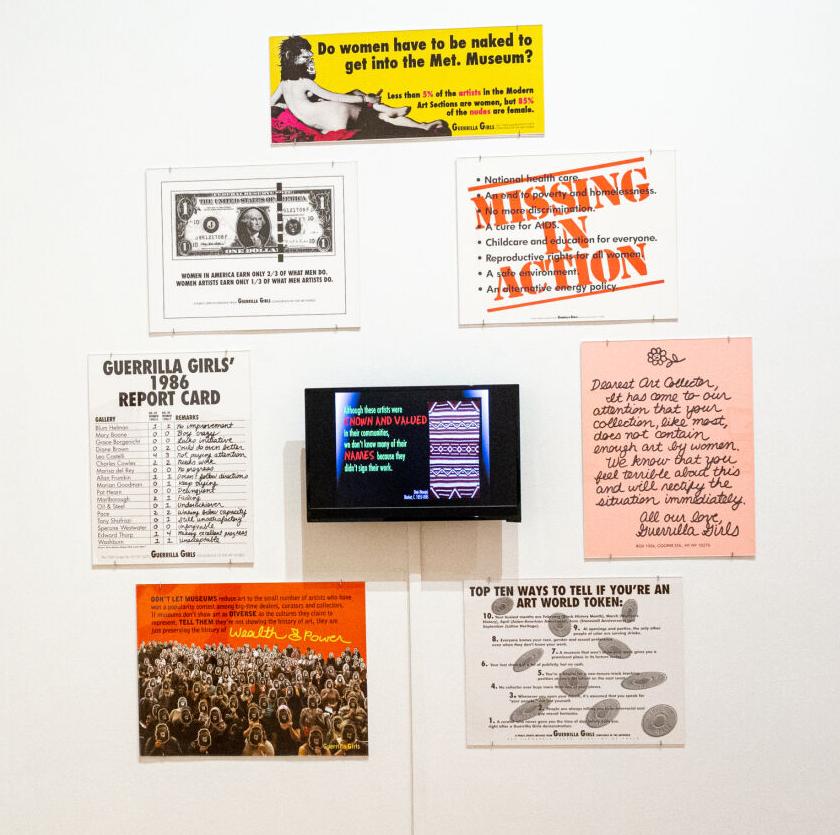 The Guerrilla Girls are no longer making moral arguments from the outside — they are on the walls themselves. A collection of their posters was recently acquired by the Williams College Museum of Art, including one of a mob of gorilla masks, and a call to action. 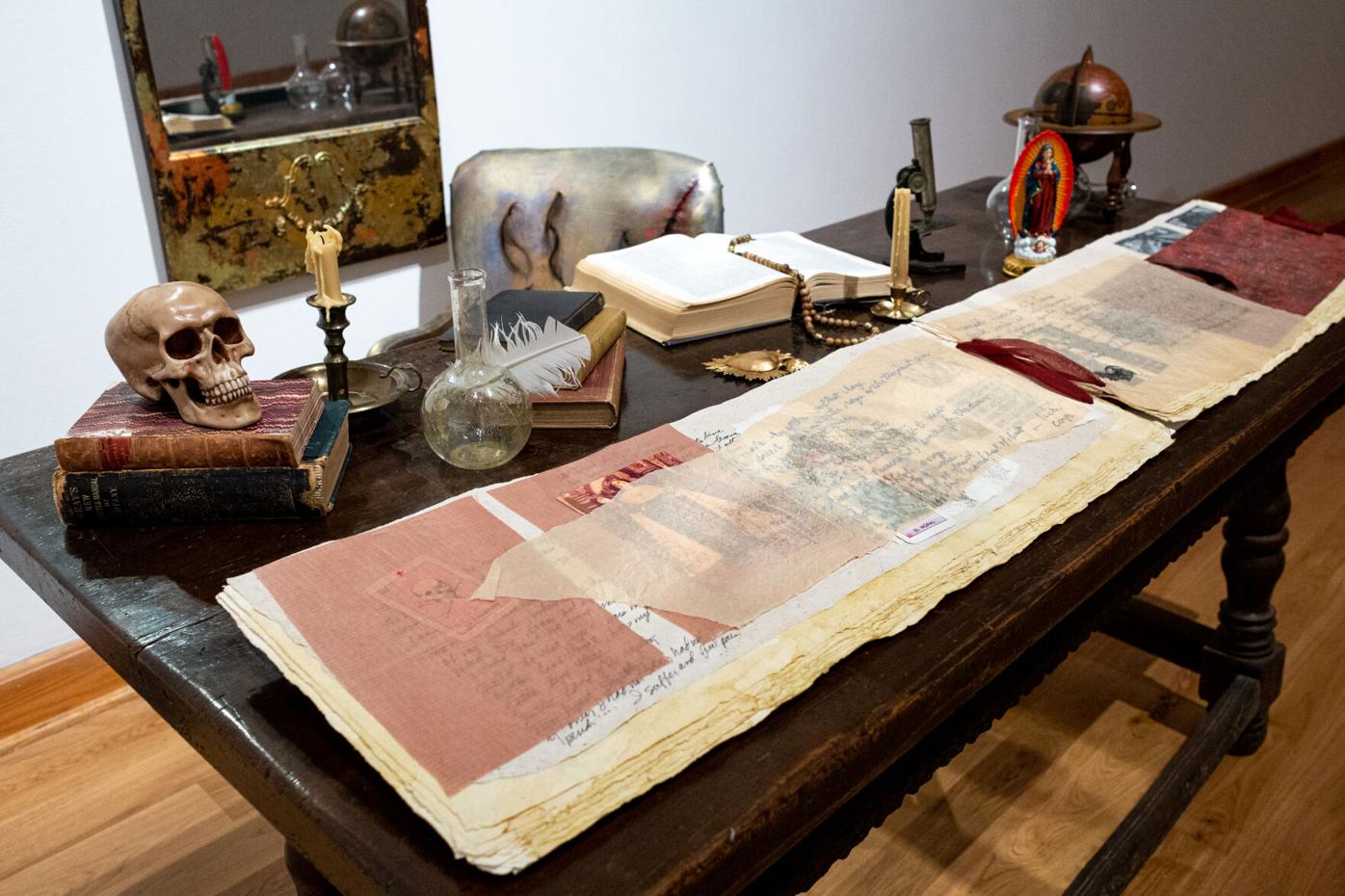 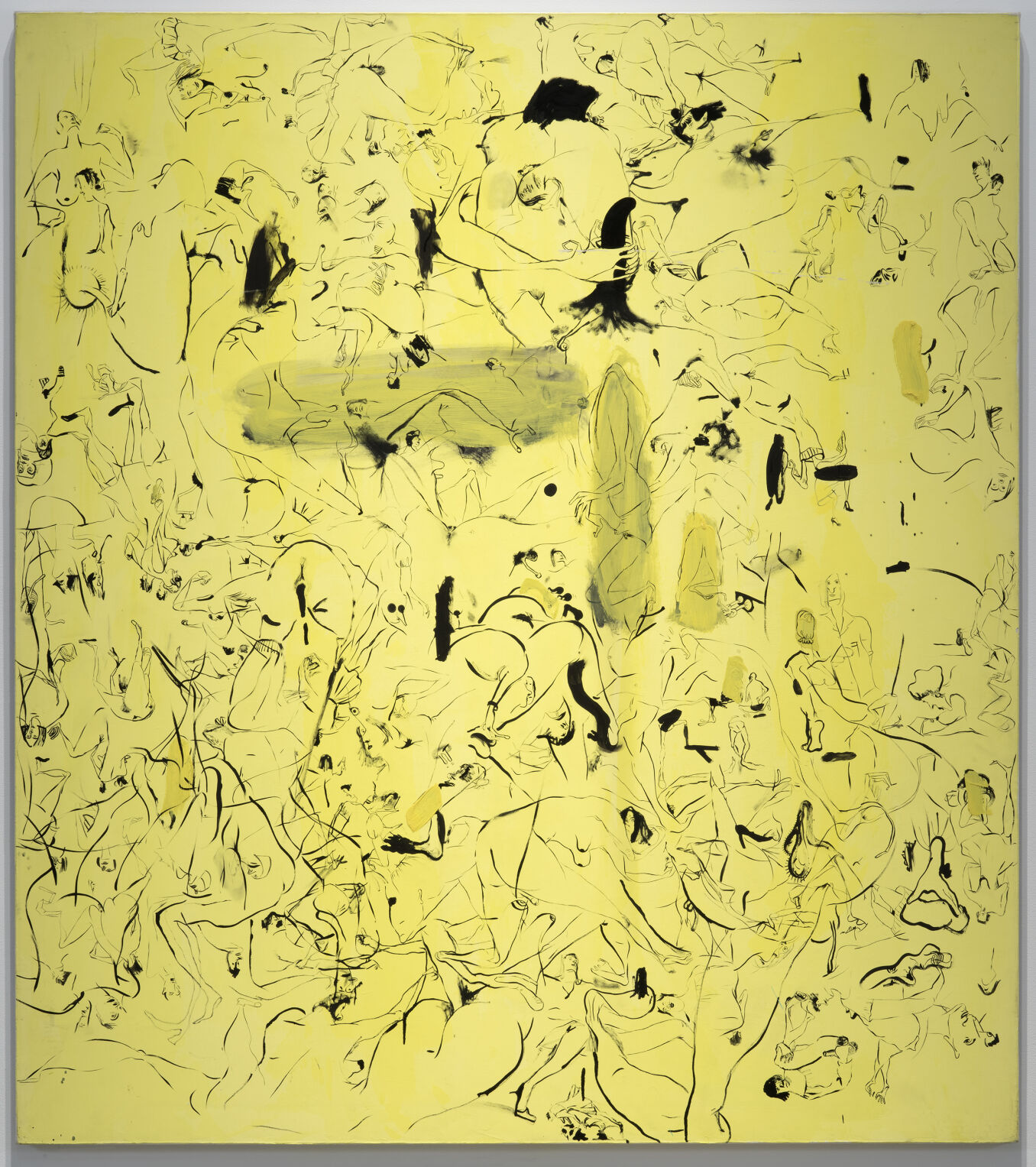 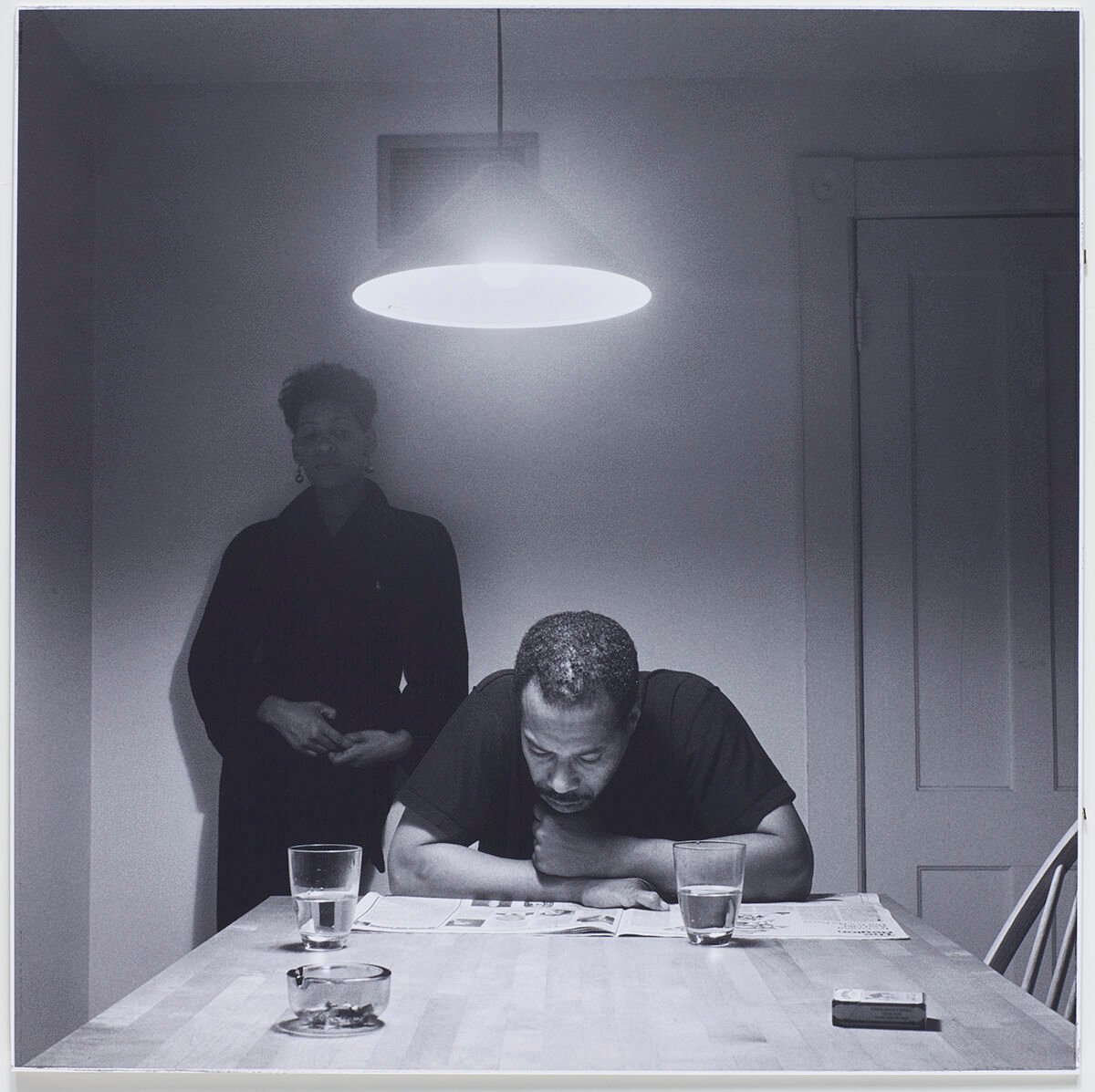 WILLIAMSTOWN — When two members of the art activist group Guerrilla Girls came to speak at Williams College in March 1988, they were still very much on the outside demanding to be let in. The anonymous agitprop collective — who described themselves as “the conscience of the art world” with their posters and leaflets and public appearances wearing iconic gorilla masks — took aim at the men’s club of museums, galleries, and collectors. And they thought the Williams College Museum of Art wasn’t doing good enough.

COVID-19 safety protocols: Masks are required for all, regardless of vaccination status.

They claimed that 87 percent of the museum’s recent acquisitions were art by white men (which the museum disputed, but at least one curator confirmed), and noted that the sculpture exhibit taking place at the time featured 15 white men, two women, and no artists of color. They also noted the big news in the art world, when in Boston the state was approving the first $35 million to fund the Massachusetts Museum of Contemporary Art, which gave them a unique opportunity.

“You guys in Massachusetts have a chance to act now to change history,” one of the activists said through her gorilla mask, according to the Williams Record. “I want to see it show the wonderful diversity there is in our country.”

Move ahead 30 years and the Guerrilla Girls are no longer making moral arguments from the outside — they are on the walls themselves. A collection of their posters was recently acquired by the museum, including one of a mob of gorilla masks, and a call to action. “If museums don’t show art as diverse as the cultures they claim to represent, tell them they’re not showing the history of art, they are just preserving the history of wealth and power.”

The works are part of a new show this fall at the museum called “Sweaty Concepts,” which gathers work Williams has acquired since the 1960s. It was planned in part to recognize the 50th anniversary of Williams admitting women, and runs until Dec. 19.

It was curated by Lisa Dorin, WCMA’s curator of contemporary art, who said it was a way to gather works that “have very different concerns but that all speak in some way to the intersections that feminism writ large bring to the fore — of belonging and identity and making space in the world.”

As a well-resourced teaching museum, WCMA has assembled a remarkable collection of feminist art over time. That includes some major names like Louise Bourgeois, who created the Eyes out front on the lawn, and has a small sculpture included in this show called Nature Study No. 3 (1985), a black whorl of curving matter with an ominous spike and a surprisingly delicate hand emerging from it.

But there are also many others from the 1970s and ‘80s who may not have earned the recognition they deserved in their time, and are now posthumously getting it. That includes Ana Mendieta, whose photo print “Untitled” (1983) is of an imagined prehistoric female figure carved from the earth, suggesting a transcendence of time and space. A haunting self-portrait by Francesca Woodman, who died at only 22, seems way ahead of its time.

And many pieces from the period seem to have tapped unfortunately eternal threads.

May Stevens addresses patriarchy in “Big Daddy Paper Doll” (1970), a comic-like strip of a man modeled on her own reactionary father, as a mole-like, phallic blob with various costumes of cop, Klansman, soldier, and butcher. Others in their specific details point to enduring challenges, as in Patssi Valdez’s “Los Angeles” (1983) in which the Chicana artist stands before a major public art project that had been given to yet another male minimalist sculptor.

The title of the show comes from the work of feminist writer Sara Ahmed, describing the particular physical exertion in addition to the intellectual one it takes to claim a space. Dorin described it as “the effort of being in a space when it is not a space for you.”

That this is an ongoing, living concern emerges further in the space, where efforts to broaden the lens to bring in more perspectives appear. That includes Black artists, like photographer Carrie Mae Weems with her portrait of a family, “Untitled [Man Reading Newspaper],” (1990), or Muslim artists, like Lalla A. Essaydi’s photo that reclaims and asserts the female body as it merges with traditional calligraphy. Or those who are disabled, like Christine Sun Kim, whose “Why I Watch with Closed Captions” (2019) is a pie chart of ways for a hearing-impaired person to explain themselves in a hearing world (“Good for Rap Battles,” “See ‘Why I Do Not Read Lips’ Pie Chart”).

And while the exhibit imagines a sense of inclusion and safety, some of it can be harrowing in its stark depiction of the world. Sue Williams’ “Scooter” (1994), a large bright yellow canvas covered with a swirl of graffiti scrawled bodies and pieces of bodies colliding and merging in unclear, somewhat disturbing ways. Nearby are Kara Walker’s watercolors depicting scenes of enslavement and violence, and Zoe Leonard’s typewritten handout from 1988 imagining what kind of empathetic presence they’d like to see in power.

And there is playfulness as well. There is the colorful world of Indian artist Rina Banerjee’s “Dangerous world, lava…” (2010) a colorful collision of people and their environment and how they interact. Or the photo “Coyote Tales No. 1,” (2020), by Cara Romero, a new take on an Indigenous tale about the trickster coyote, who frankly seems to have met his match with two very self-assured women. Or most arrestingly, Kerry Stewart’s statue, “This Girl Bends” (1996), of a woman lying on her back bent at the knees at an impossible angle. A work that is both instantly arresting and hard to define (a sleeper? A businesswoman? is it a person being manipulated, or exerting magical control?).

The exhibit is also an opportunity to bring out larger installations that don’t make it out often. That includes Jenny Holzer’s “I go to schools …” (1989), a vertical zip line featuring her signature aphorisms, but here also inscribed on a black marble sarcophagus on the floor. It contrasts the light ephemerality of the words written in light, also given a heavy permanence by being literally carved in stone.

Also there is Amalia Mesa-Bains’ “The Library of Sor Juana Inez de la Cruz” (1994), an installation about a 17th-century Mexican nun and polymath and the world she inhabited which figured in a show in 1994, and was adapted here with guidance from the artist, as it was originally its own room. Nearby is Dotty Attie’s “Stranded in Italy” (1987), a repurposing of imagery from an Ingres painting, arranged almost like a comic strip with text embellishments that describes a bit of voyeurism that flips the script on the original’s unapologetic male gaze.

The ideas and the practice are the same. Another exhibit currently at WCMA that neatly complements the exhibit is Kameelah Janan Rasheed’s “Worshipping at the Altar of Certainty,” a site-specific work in the museum’s Rotunda, which had once been the college’s library. Playing off that, she takes from Jorge Luis Borges’ idea of the possibility that a big enough library could include every conceivable text, and scholar Ashon Crowley’s idea of Black thought “does not privilege any notion of centering but is constantly erasing, revising, undoing, unsaying and resting on or in fullness, completion.” The piece bounces between these two contrasting ideas through fragments of shapes and black and white, with a loop of text around the base pulling it all together (“… sometimes the book wants to eat my imagination and sometimes I let it and at times I succumb to the canons I cannot banish…”).

The show has been in the works since spring 2019, and was put on hold when the museum closed from the pandemic in March 2020, and only gradually began to reopen last summer. It was a useful chance to “frame what we have, how it gets used, and how often.”

“It left me optimistic, to a point,” she said. “There is still a lot we can do.”