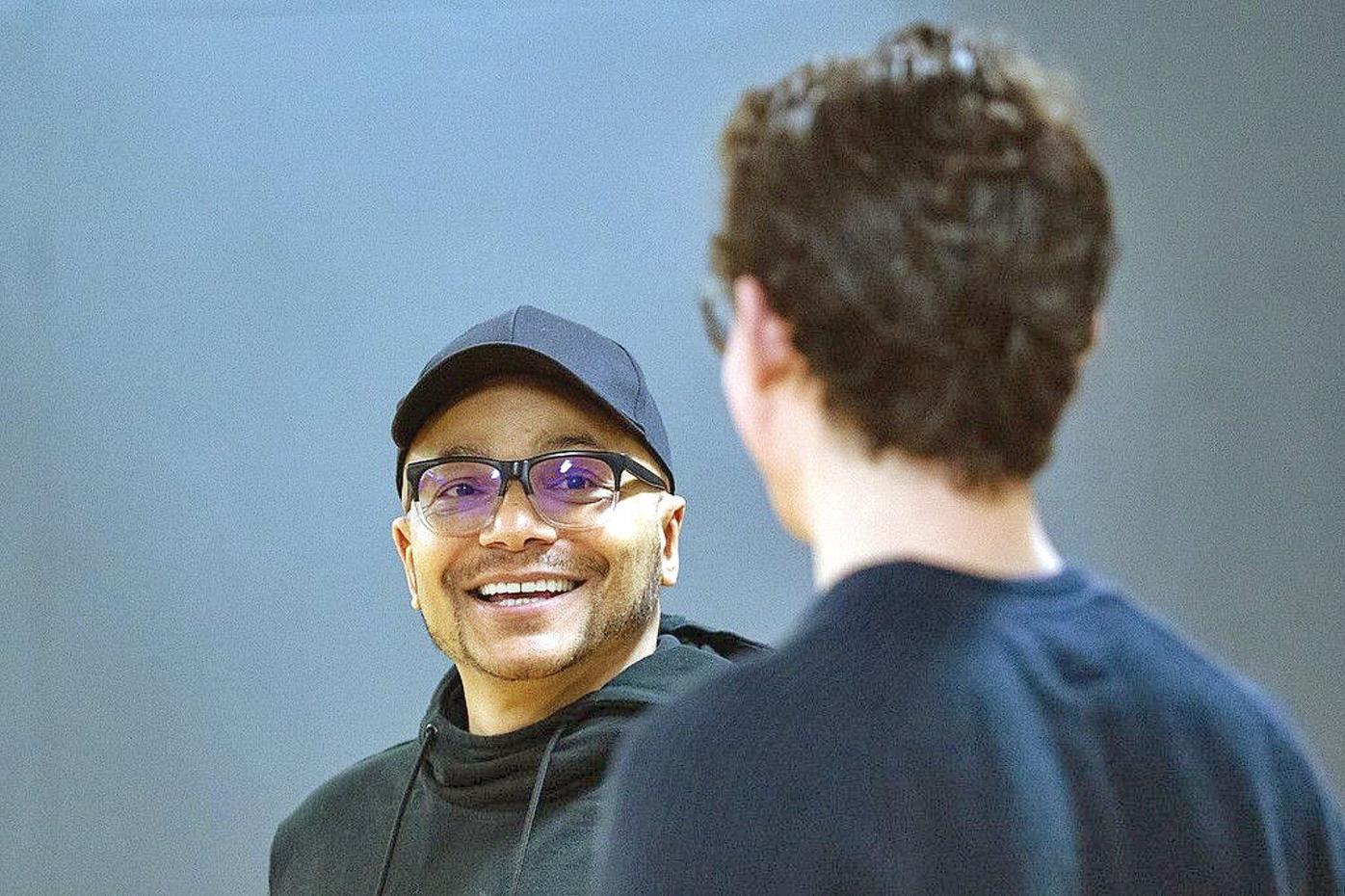 Omar Sangare - seen here with Williams student William Titus - teaches in the Williams theater department and is the founder and artistic director of the United Solo company in New York.He said he began thinking about a year ago about ways the department could acknowledge Sondheim's anniversary, 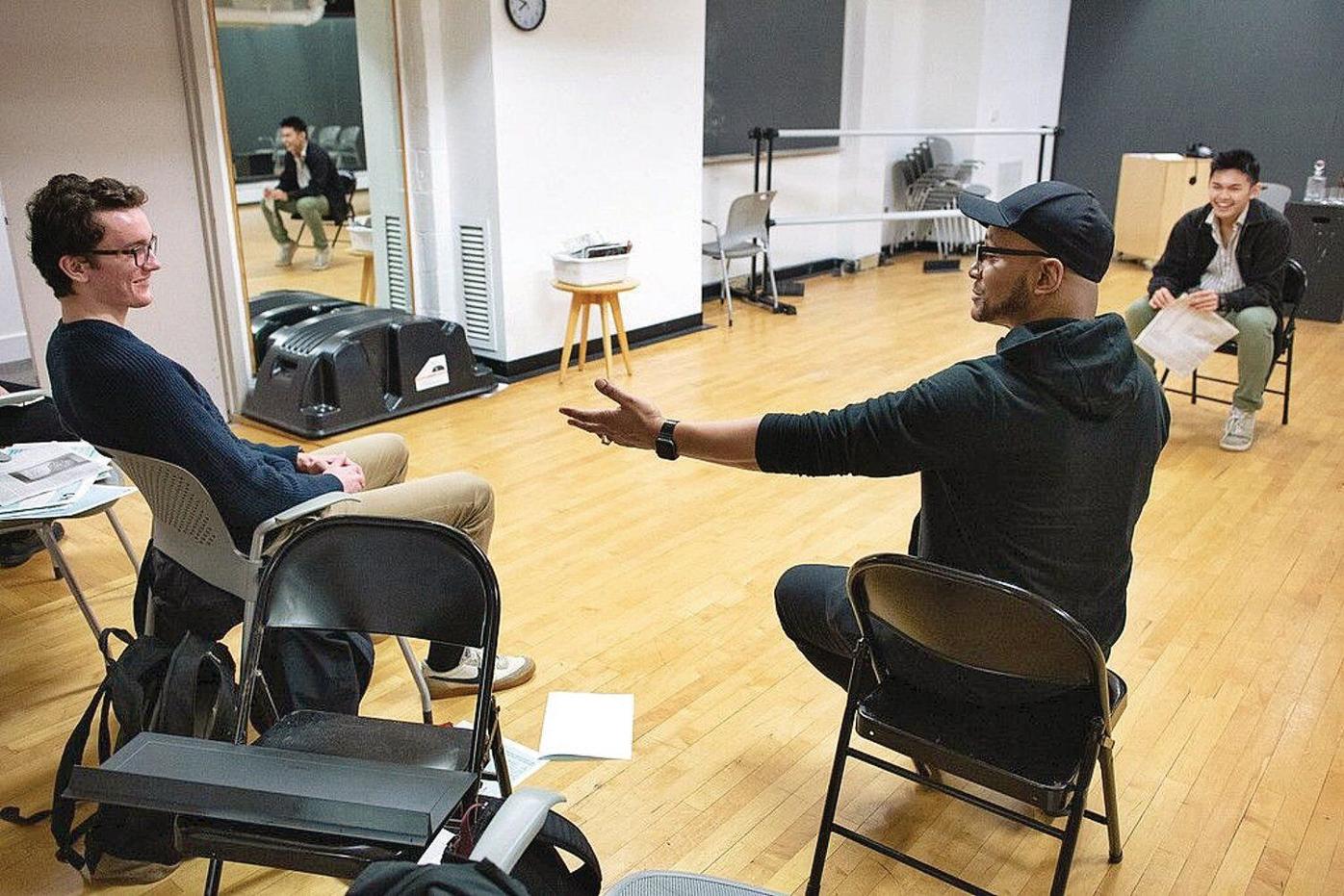 Williams College theater professor Omar Sangare (center) discusses a scene from "Our Time: A Play About Williams" during a rehearsal with studeht cast members William Titus ('23, left) and True Pham ('23, right), The production is an important part of the "Sondheim@90@Williams" celebration at the college to celebrate the 90th birthday of acclaimed American songwriter, dramatist, and Williams aum Stephen Sondheim.

Omar Sangare - seen here with Williams student William Titus - teaches in the Williams theater department and is the founder and artistic director of the United Solo company in New York.He said he began thinking about a year ago about ways the department could acknowledge Sondheim's anniversary,

Williams College theater professor Omar Sangare (center) discusses a scene from "Our Time: A Play About Williams" during a rehearsal with studeht cast members William Titus ('23, left) and True Pham ('23, right), The production is an important part of the "Sondheim@90@Williams" celebration at the college to celebrate the 90th birthday of acclaimed American songwriter, dramatist, and Williams aum Stephen Sondheim.

This article has been updated to clarify that the "Our Time: A Play About Williams" production includes a pre-recorded interview with Stephen Sondheim. Sondheim will not attend the performance himself.

WILLIAMSTOWN — Before he became a legend of American musical theater; before the Tonys, the Grammys, the Pulitzers, the Presidential Medal of Freedom, Stephen Sondheim was just a college kid at Williams, a member of the class of 1950 who put on his first productions at the Adams Memorial Theater.

It was a different college in a different country. It was all male for starters, and subject to a rigid social hierarchy built around fraternities. But there were already signs that the country was changing, and that the college would have to go with it. And it was a unique moment that a new theater production at the same Adams Memorial Theater (now part of the '62 Center for Theatre and Dance) will explore as part of the college's celebration of Sondheim's 90th birthday later this month.

"Our Time: A Play About Williams" — which begins performances Thursday night and continues Saturday and March 12 through 14 — was created by playwright, visiting professor, and alumnus Ilya Khodosh and theater professor Omar Sangare, based on the research and notes of a group of students who dug into the archives to find stories and themes that could be presented on stage. The purpose is not just to explain the college's past, but connect it to issues today.

"In order to have a clear and inspiring vision for your future you need to reckon with your past, and to process it," Khodosh said during a joint interview with Sangare at the '62 Center.

Sangare said the action of the play is an effort to create a portrait of life at Williams during those years that Sondheim would have been on campus.

"As you walk in you will be invited to Williams, you'll be greeted and encouraged to participate in various events, whether they happen in a classroom, a concert hall, a fraternity house, a family home," he said. "We'll go through many addresses as we explore Williams College."

The production is not biographical, or anything like that, by design. "His legacy speaks for itself," Sangare said.

Within that setting, the characters emerge and their relationships with one another are explored. "You get a real sense of a living community that is changing and clashing, growing and struggling," Khodosh said.

This is an important part of the "Sondheim@90@Williams" celebration at the college to celebrate the 90th birthday of the acclaimed American songwriter and dramatist. It is a series of events that includes a production by the college's student drama group, Cap & Bells, of "A Little Night Music," Friday and Sunday evening at 7:30 and Saturday and Sunday afternoon at 3 in Adams Memorial Theatre; an alumni concert on Friday; and a scholarly symposium Friday evening and all-day Saturday on Sondheim's life and work.

For Khodosh, this production is deeply personal as a longtime admirer of Sondheim's work. He described being a first-year on campus and going to New York to attend a 12-hour "Wall to Wall Sondheim" production at Symphony Space. While here, he was in a production of his TK musical Assassins. Sondheim was an inspiration for his own work, after graduating in 2008 he earned a D.F.A. at the Yale School of Drama and is now a writer based in New York.

Sangare teaches in the Williams theater department and is the founder and artistic director of the United Solo company in New York, and first met Khodosh when he first came to campus for a demonstration class. He said he began thinking about a year ago about ways the department could acknowledge Sondheim's anniversary and thought of Khodosh.

The process began with a class during the Winter Study term in January and eventually grew to include a company of 14 students. Khodosh instructed them to find material in old issues of the Williams Record that they found "personally meaningful, inspiring, or interesting in some way."

"It was student-driven," he said. "We wanted to think about what Williams College was like when Sondheim was a student here."

From there they built the characters, their relationships, and outlined themes they wanted to explore. "We encouraged them to find material that could be theatrically embodied," Khodosh said.

Back then Williams was a notably homogeneous place, with a rigid social structure that split into different fraternities and those who were excluded for one reason or another.

"We were interested in difficult aspects of late-1940s culture, of discrimination and exclusion," Khodosh said. "At the same time, we didn't want to spoon-feed these themes to the students. We wanted them to think critically about the era for themselves."

But even as it existed at the time, it was already beginning to break down in certain ways.

"That postwar generation included veterans coming to campus having seen battle. Some of them were older and already had families," Khodosh said. "This was a generation that really grappled with the question of what kind of institution they wanted Williams to be, and by extension, what vision they had for the country more broadly."

The hope is that the written words will find a way to connect with the current students, and he is proud of the diverse team they brought together to make it happen. "I hope that the material will be somehow relevant to our students, that it won't sound dated or `once upon a time.'" Sangare said.

Sangare also noted that another theme is the central role of the arts on campus, which has been a constant through the decades.

“No matter how we look at the college, theater has been a place to vocalize strong opinions, and learn from it and to find common space for all of us in the larger community, even if we disagree sometimes.”

One of the highlights in the production, Sangare said, is a pre-recorded video interview the pair did with Sondheim in New York City.

In that interview, Sondheim shares his stories from the stage at Adams Memorial Theatre — "the same stage he brought to life his first musical written years ago here at Williams," Sangare said.