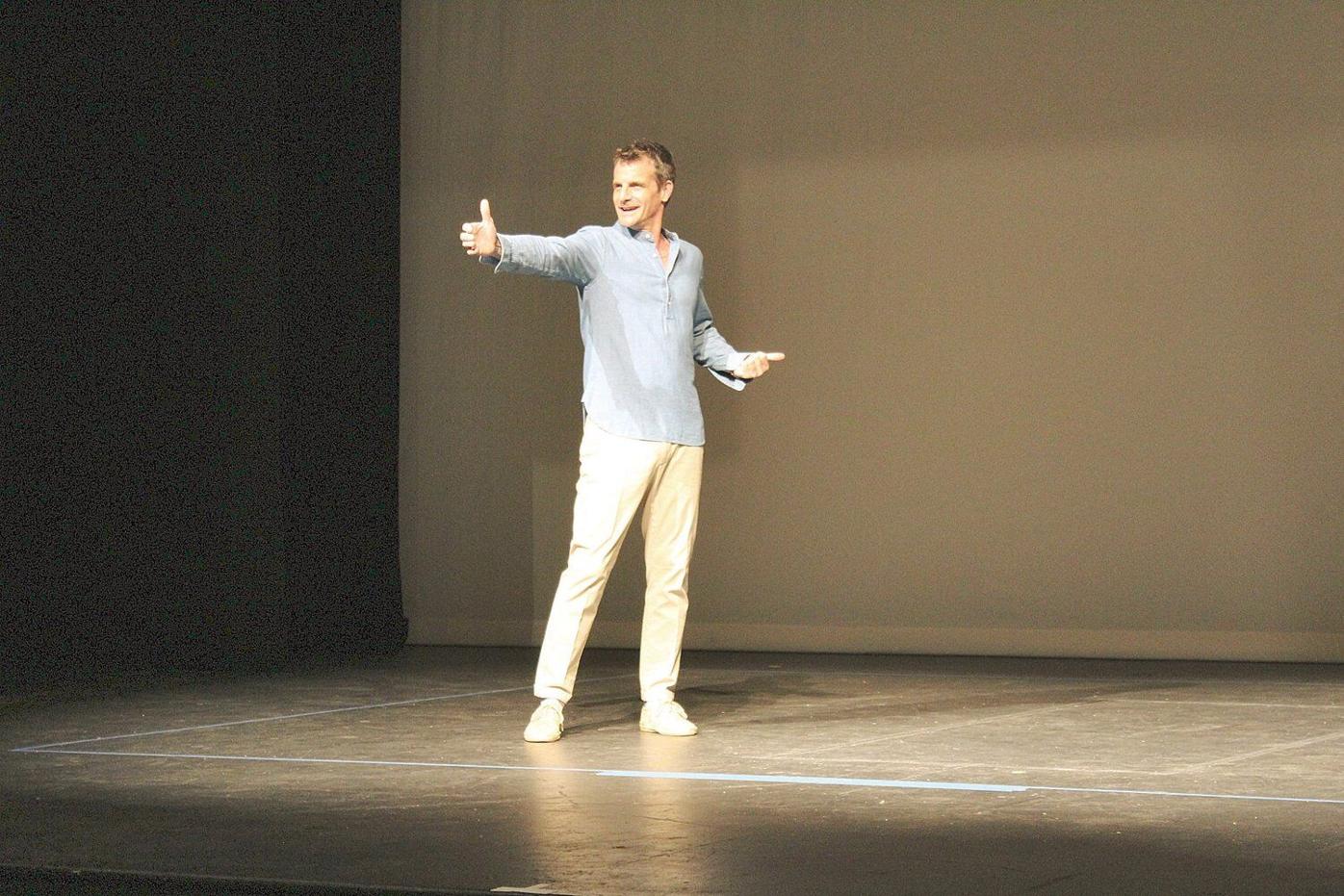 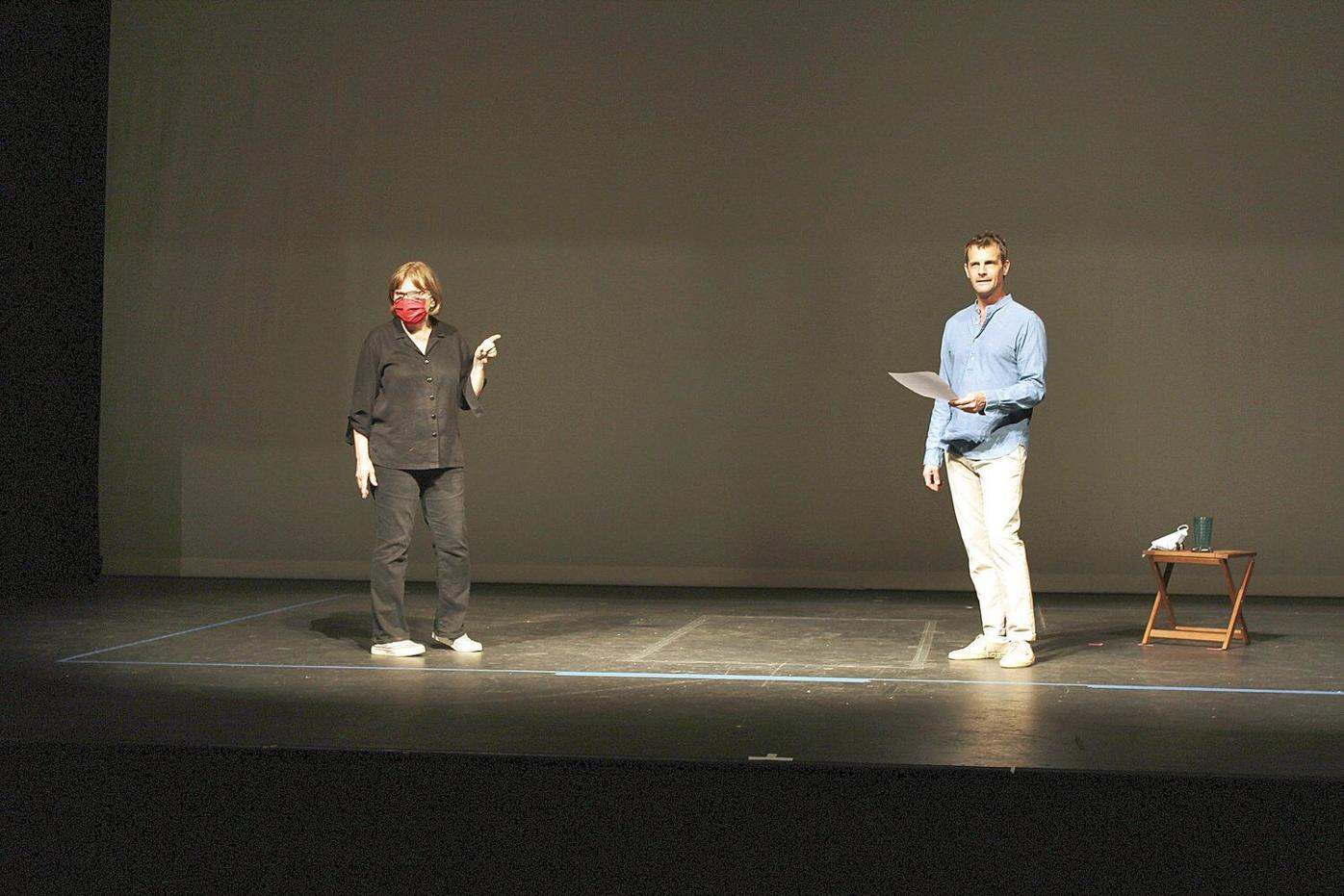 Director Julianne Boyd and Associate Artist Mark H. Dold in rehearsals for "Harry Clarke." "There's something really scrappy and immediate about this experience," said Dold, about the experience of moving the production from inside to outdoors under a tent a week before previews begin.

Director Julianne Boyd and Associate Artist Mark H. Dold in rehearsals for "Harry Clarke." "There's something really scrappy and immediate about this experience," said Dold, about the experience of moving the production from inside to outdoors under a tent a week before previews begin.

Reinvention is at the heart of Barrington Stage Company's production of "Harry Clarke," in more ways than just what's in the script. A week before the curtains were supposed to go up, the one-man show had to move outdoors.

Up until late last week, BSC was set to be the first Actor's Equity approved indoor production since the outset of COVID-19. But then the company was notified that Gov. Charlie Baker is planning to delay implementation of the second step of Phase 3 of his reopening plan for the state, which would allow indoor theatrical productions.

The one-man thriller directed by BSC Artistic Director Julianne Boyd and starring Mark H. Dold, opens for previews Wednesday, running through Aug. 16, and will now be held under a tent at the Polish Community Club, instead of at the Boyd-Quinson Mainstage. The production will be one of two shows featuring Actors' Equity performers and stage managers (the other is Berkshire Theatre Group's outdoor production of "Godspell") approved to go up in the entire nation.

The quick turnaround, according to Boyd, is made possible by the flexibility of BSC, a swift approval from Actor's Equity and Boyd and Dold's desire to bring engaging storytelling safely to the Berkshires regardless of the ultimate venue.

For Dold, an actor whose credits at BSC include "The Glass Menagerie" and "Breaking the Code" and who spent last summer performing outdoor Shakespeare in San Diego, this flexibility is invigorating rather than intimidating.

"I'm oddly feeling more emboldened and empowered than ever right now," said Dold. "This show just can't get knocked down. I'm like, `Yeah, come on, what are you going to throw at us next?'"

"Harry Clarke," written by playwright and actor David Cale, tells the story of a shy Midwestern farm boy named Phillip Brugglestein who adopts an alter ego — the brash, flirtatious Londoner, Harry Clarke — when he leaves the farm for a new life in New York City. Though Brugglestein's persona allows him to access new layers of his personality, it also threatens to upend life as he's known it as he becomes increasingly entangled in a web of uproarious fabrications.

Dold, as the sole performer, does most of the communicating in "Harry Clarke" as he portrays more than a dozen characters from Cockney troublemakers to Jewish mothers over the course of the show's 85 minutes.

"I do Cockney, a little French, a little Midwest, a little Bronx, a little Long Island," Dold said. "It's a potpourri of dialect work, which is thrilling."

Even when Dold is just playing Clarke, he is playing two characters at once, as Harry Clarke, torn between two identities, struggles to determine whether the identity he was born into is more authentic than the self he has created.

"I do, on a certain level, feel a profound connection to this person — someone growing up in a world they don't fit in, and has to invent and re-invent themselves in order to survive," Dold said.

With only one actor, no backstage crew, a minimalist set and no intermission, "Harry Clarke" is well-suited for social distancing.

Of course, Boyd chose the show for exactly these reasons after the pandemic forced Boyd to retool BSC's season. Seven productions — including a revival of the Pulitzer Prize-winning "Anna in the Tropics" and the world premiere of "A Crossing," a musical about migrants crossing the southern border — had been scheduled for BSC's 2020 summer season when theaters across the country went dark this spring in response to concerns over the coronavirus pandemic. In early April, BSC announced that rather than canceling their in-person season offerings outright, such as Williamstown Theatre Festival and Jacob's Pillow had done, they would adopt a "wait-and-see posture."

As BSC and other regional theaters held their breath, Boyd reached out to Dold, an old friend who has acted with BSC since 2004 and was named an associate artist with the company in 2012, to see if he'd be interested in performing in "Harry Clarke." When Dold agreed, Boyd announced the new show in an April 28 press release. Neither Boyd nor Dold realized that come August, "Harry Clarke" would be only one of two shows cleared for safety by Actors' Equity, whose executive leadership met with BSC and The Berkshire Theatre Group to develop safety protocol that included required weekly testing at Berkshire Medical Center for cast and crew and theatrical setups that met social distance requirements.

"It wasn't supposed to be an example for the country, or the state, or the Berkshires," said Boyd. "We just did it because we wanted to."

Obtaining permission from Equity for indoor performances required BSC to radically restructure the Boyd-Quinson Mainstage. The changes included removing every other row of seats to reduce theater capacity and replacing the theater's air conditioning system. Though "Harry Clarke" will not make use of the redesigned theater as previously hoped, and will instead be presented under a tent with a capacity of 100, Boyd looks forward to when future productions can use the space.

"The special work we've done to create a safe, responsible theater will still be used when this delay is over, and we're excited to share that with people, as well," Boyd said. "I would have loved it inside, but ultimately it's the show we're interested in communicating with people."

The team behind "Harry Clarke" had planned for the possibility that indoor performances would no longer be viable, meaning differences between the indoor and outdoor versions of the show are small and technical in nature (Dold, for example, will have to wear a microphone). Keeping the production bare bones allowed for such adjustments while providing a creative challenge for the cast and crew.

"There's something really scrappy and immediate about this experience," said Dold, who most recently appeared in "The Inheritance" on Broadway, a show with vastly more intricate production elements. "It's like when you're the kid in a sandbox with your friend, inventing and flying by the seat of your pants. You've got to get really inventive and imaginative and work fast."

Dold points out that producing "Harry Clarke" was made possible not only through the hard work of the BSC team, but also by the conscientiousness of Berkshire residents whose adherence to social distancing guidelines kept case counts low enough to allow live theater.

"No matter how hard anyone else has worked, the reason this is happening at baseline is because the people of Berkshire County have taken this pandemic very seriously," Dold said.

Of course, masked audiences come with their own challenges; Boyd was curious whether masks (required regardless of where the production is staged) will muffle laughter, while Dold wondered how he will read the audience's reactions to his performance.

"The audience is my main scene partner," Dold said. "There's going to be a real interesting period of adjustment when I can't read their faces. It's a new language there."

However, Boyd and Dold know that the special feeling of sharing art together in a room will not change no matter how different "Harry Clarke" is from BSC's past productions.

"The applause on that first night isn't going to be for me, it will be for everyone who made it happen, for everyone who chose to sit in the [space] for that 80 minutes and be a part of this," Dold said." It's us applauding each other."