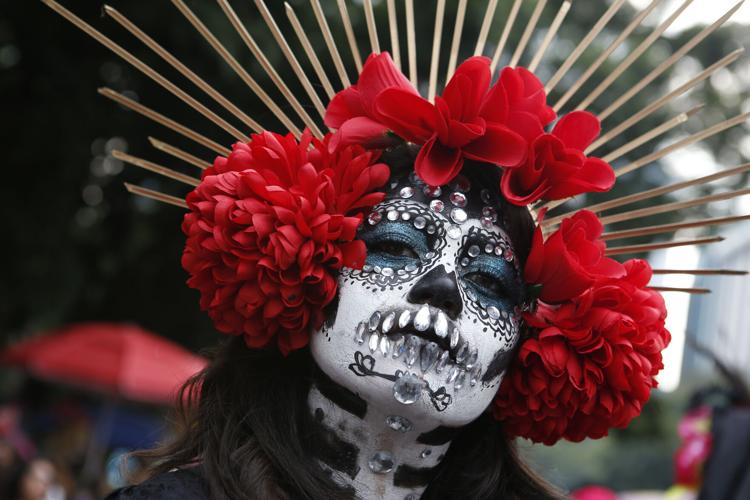 A woman with her face painted to look like the popular figure "La Calavera Catrina," Mexico's Grand Dame of Death, joins a parade on Mexico City's iconic Paseo de la Reforma avenue during celebrations for the Día de los Muertos in 2019. 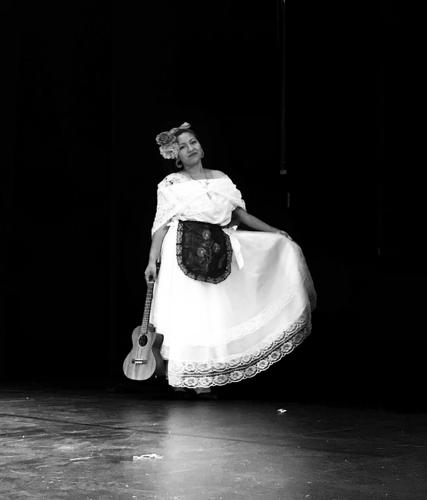 Laura Cabrera, originally from Veracruz, Mexico, is a member of the Mahaiwe Performing Arts Center's Spanish-language Community Advisory Network and 413 Latinas. She also is a Mexican folk singer. 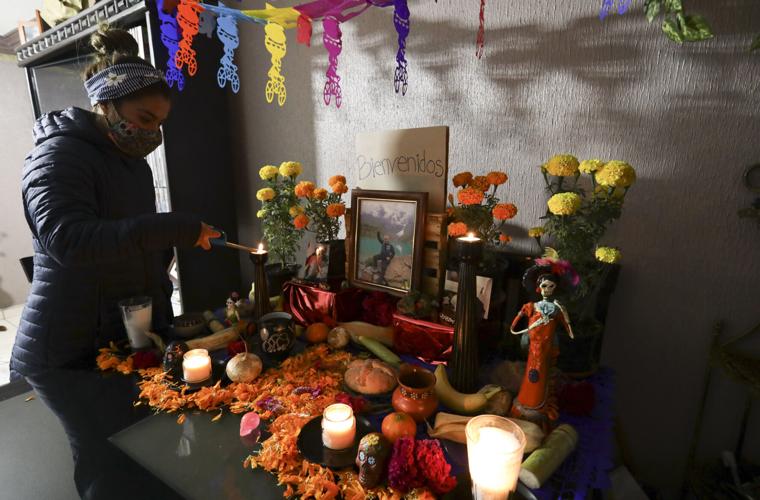 Karen Valencia, lights candles on a Día de los Muertos ofrenda (Day of the Dead altar) for her father Jose Valencia, a nurse who died from symptoms related to COVID-19, at their home in Mexico City, on Sunday, Nov. 1, 2020. 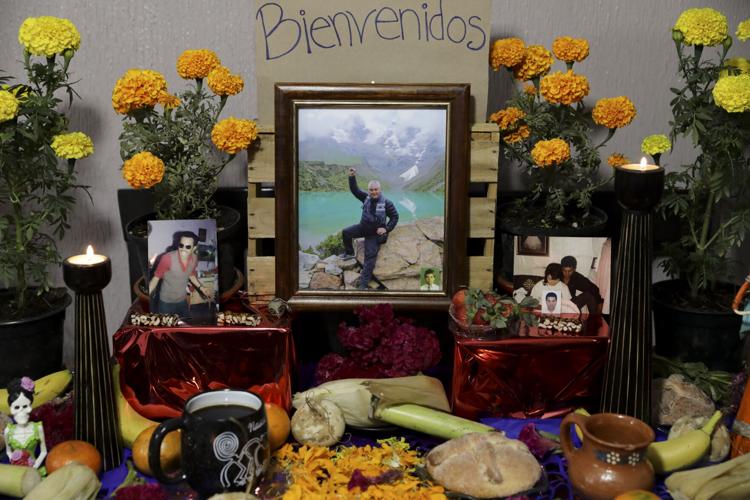 A portrait of Jose Valencia, a nurse who died from symptoms related to COVID-19, placed on a Dia de los Muertos ofrenda (Day of the Dead altar) made by his daughter at their home in Mexico City, on Nov. 1, 2020. 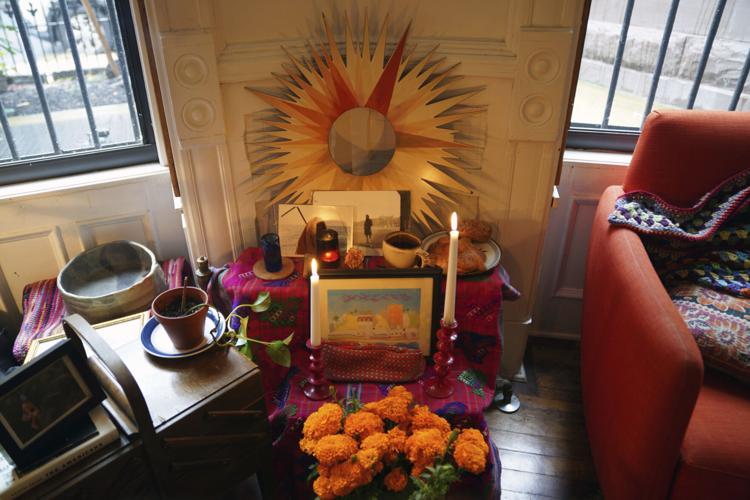 "It feels extremely comforting. I do feel I have a connection with my dad," said Diaz Aguirre, who set up the altar in remembrance of his father. 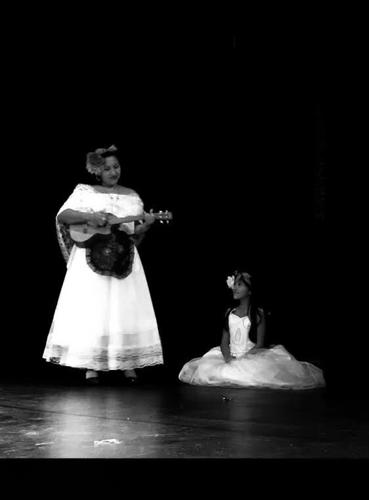 Laura Cabrera, originally from Veracruz, Mexico, is a member of the Mahaiwe Performing Arts Center's Spanish-language Community Advisory Network and 413 Latinas. Cabrera, who is also a Mexican folk singer, is seen here with her daughter Liberty.

PITTSFIELD — Día de los Muertos (Day of the Dead) is a holiday of growing popularity in the United States, but most Americans don't know the origins of the festival that honors the dead through a celebration that emphasizes family gatherings.

The history of Dia de los Muertos goes back some 3,000 years, to pre-Columbian Mesoamerica, where, according to History.com, "the Aztecs and other Nahua people living in what is now central Mexico held a cyclical view of the universe, and saw death as an integral, ever-present part of life."

"Upon dying, a person was believed to travel to Chicunamictlán, the Land of the Dead. Only after getting through nine challenging levels, a journey of several years, could the person’s soul finally reach Mictlán, the final resting place.

"In Nahua rituals honoring the dead — traditionally held in August — family members provided food, water and tools to aid the deceased in this difficult journey."

These ancient rituals, says History.com, were aligned with the Roman Catholic holy days — All Saints and All Souls — during colonization of Mexico and Central America by the Spanish conquistadores in the 16th century, resulting in contemporary Día de los Muertos celebrations.

And while Dia de los Muertos ceremonies are mostly associated with Mexico and Mexican American communities, the annual festival also is celebrated throughout Central America and Latin America, where, it is important to note, the traditions and celebrations differ by region, state and country.

"I remember that we would go to my grandparents' house. At that time we didn’t have car and we had moved to another small town. When we used to go to visit my grandparents, we would walk and it would take three hours, walking, to get there. It was a big celebration, especially for grandparents — it was a tradition with their ancestors, that my grandmother passed to my mother," Cabrera said during a recent interview.

"It's [more than] just tradition, the way it feels, it feels so real. I wasn't scared [of the dead returning] when I was little. I was excited by the smells of the foods. It was like magic. It was special to have the whole family together," she said.

Cabrera, a member of the Mahaiwe Performing Arts Center's Spanish-language Community Advisory Network and of 413 Latinas, said in addition to helping set up the la ofrenda (altar) at Berkshire Community College this year, she and her artist-focused group, I M Art, will be hosting a celebration on Oct. 30 at Race Brook Lodge, in Sheffield, where they will put together an altar, explain what it is about and sing songs representative of Día de los Muertos in Mexico.

Recently, we asked Cabrera to help us better understand the celebration of Dia de los Muertos, and a few of the traditions that go along with it. Here are a few facts she shared about Día de los Muertos …

Thanks to erroneous commercial marketing of the festival, some people have begun to incorrectly identify it as Mexican Halloween. While the two holidays overlap in the belief that the dead can walk the earth at a specific time of year, the similarities end there. Unlike Halloween (with its origins rooted in the Celtic festival of Samhain), where costumes are donned to hide from the spirits who walk for a single night, Día de los Muertos festivities welcome home deceased relatives who are treated as guests of honor. In fact, most of the festivities are aimed at helping to guide family members home.

2. Día de los Muertos is celebrated on more than one day.

In Cabrera's family, Día de los Muertos begins on the evening of Oct. 31, when the gates of heaven open just before midnight (Nov. 1).

"My mother said this night is for the souls who died in accidents or traumas. We put one candle on the altar, with water and salt. The candle is to light the way for them. The water is welcoming. The water and the salt is to quench their thirst. We put out a little plate of rice for them," Cabrera said.

Nov. 1 is reserved for the souls of children who have died.

"At 11 a.m., we take everything away from the altar. At noon, we put out a new candle, water and salt. We put out different foods: candies, apples, chocolates, sugar skulls, and the most important for me — the bread of the dead, which is shaped like small figures of children. It would smell so good. We would also put out tangerines. We had tangerines growing outside of our house, so we cut them and put them out too."

Nov. 2 is a day for adults who have died.

"It begins at noon and ends at noon on Nov. 3. At noon, we take off everything that was set out for the children and put out the mole and tamales. My grandmother, mother and aunt have been cooking the mole all day. About two hours before we set everything out, they would start making tamales. The first plate of mole, the first tamale, the first cup of hot chocolate goes on the altar, because the dead are our special guests. Everything just smells so amazing," Cabrera said.

"We put a lot of flowers — marigolds — out [with the candles, salt, water, rice and other foods]. Marigolds are the traditional flower of the Day of the Dead, they look amazing. We know when the Day of the Dead comes because [marigolds] grow in the woods."

3. The la ofrenda is one of the most important parts of the celebration.

In Spanish, ofrenda means offering. When celebrating Día de los Muertos, la ofrenda refers to an altar built specifically to hold offerings of food and drink for returning relatives. This shrine of offerings is not used for worship, but rather to hold photographs, memories of and items needed by the dead.

"The altar is, most the time, in the living room or in the center of the house, with chairs put around it.," Cabrera said. "They are built in levels. The first level, at the bottom, is where some people put the fruit — tangerines, oranges, bananas, the rice and other foods, the mole, tamales."

Upper levels are usually adorned with items of clothing or small items that belonged to the dead and photographs of the deceased. The top level is typically reserved for images of saints and crucifixes.

4. Food is a big part of the festivities.

"One of my favorite memories I have," Cabrera said, "is of sitting down with my grandmother and watching her clean dried pepper for a mole. We make mole for celebrations; weddings or birthdays. I recently called my mother and asked her how long it would take to prepare all of the foods. She said, about two weeks, beginning when they buy the peppers and all the spices they put in the mole. Then, when they start to make the mole, they do not stop. I asked my mom, 'How long do you take to cook the mole?' I asked because I have memories of her cooking all day. She said that it would take one day, that they would cook it all day. The day before, the peppers would be put in water."

5. It's all about celebrating life and family.

"We meet at some point when we are alive, and we meet at some point every year when we go into the next part of life. I feel this is beautiful, because I don’t feel like my family members have died," Cabrera said. "When I’m cooking, I hear the words of my grandmother and I feel they have not died. For me, she lives on with me because I carry her in my heart. The words that she left me, I think if we transmit to our children, our traditions, beliefs or myths will never die.

"For me, feeling of the energy of our loved ones; the smells [associated with their cooking] remind me of sharing food and of family. Those are the most important things for me."