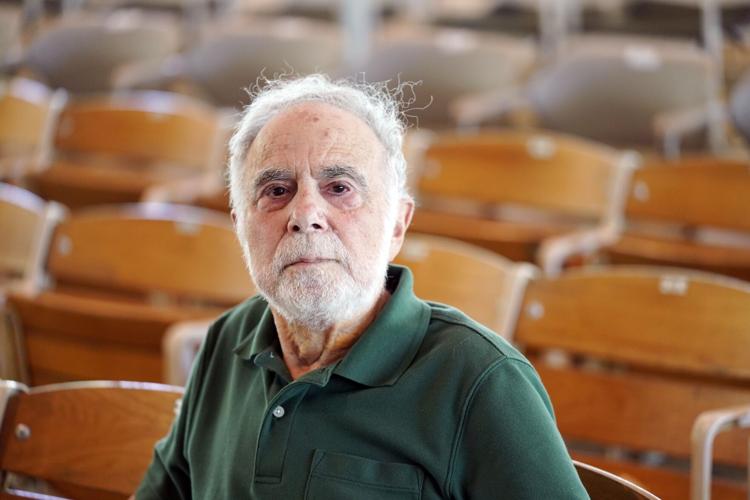 Andrew L. Pincus reviewed classical music for The Berkshire Eagle for 46 years. This has been his seat for years.

Jay Rosenfeld was The Berkshire Eagle’s first classical music critic, a position he held for 55 years. Andrew L. Pincus succeeded Rosenfeld in 1975. Between them, the pair spanned a remarkable century writing about world-class music in the Berkshires.

LENOX — For the past 100 years, The Berkshire Eagle has had just two classical music critics — including the major assignment of reviewing concerts since the Boston Symphony’s summer home at Tanglewood opened in 1937.

Jay C. Rosenfeld of Pittsfield worked for The Eagle from 1919 until shortly before his death in October 1975, reviewing Berkshire concerts and covering Tanglewood.

From 1975 through last summer, so did Lenox resident Andrew L. Pincus, 91, whose retirement is announced today.

Both wrote for The New York Times as freelancers. Their combined longevity covering classical music is a nearly certain U.S. record.

Pincus, an Atlanta native, later moved to New Orleans with his family. His parents — Bernard, a department store merchant and Amelia, a homemaker — were avid music lovers.

His career in journalism followed graduation from Dartmouth College with a degree in music and service for the U.S. Army in Germany during the Korean War era. After learning the ropes at New Jersey papers, he was hired at The Eagle in 1967 as a top editor, responsible for the front page and for handling international and national news.

When he started, Pincus recalled, Eagle owner and publisher Lawrence K. “Pete” Miller gave him ambitious marching orders: “I want you to turn this paper into ‘a little New York Times.’”

Eighteen years after his arrival at The Eagle, Pincus decided to go freelance, devoting himself to classical music, but also writing essays on life in the Berkshires and three books. In 1983 and 1987, he won the prestigious ASCAP Deems Taylor Award for music criticism.

“Andy’s love of Tanglewood — its traditions, its lore — is palpable,” said Tony Fogg, the BSO’s vice president of artistic planning who joined the orchestra’s administration in 1994. “Over the years, he’s seen and chronicled everything about the festival: the shifting emphases and tastes of three different music directors, the morphing of various educational and training programs, the growth of the campus, the big celebrations, the comings-and-goings of major personalities.

“Through all of this, he’s remained true to a set of criteria that always puts absolute musical values at the core, regardless of fads or fashions or commercial appeal,” Fogg said. “One didn’t always agree unreservedly with his viewpoint, but one always respected his conviction and the honesty of his responses.”

Ronald Feldman, music director of the orchestra, artist-in-residence at the Williams music department and a cellist in the Boston Symphony from 1967 (when he was 19) to 2001, said that “critics must rely on personal preferences, previous performances, recordings and academic research to evaluate a performance.”

“How can you accurately compare a performance by a local ensemble with one from an established professional ensemble? Andy understood how to walk this fine line,” he continued. “Whether you were the Boston Symphony or the Berkshire Symphony, he was careful to make fair judgments. His knowledge of contemporary music was always well-researched.”

In Feldman’s view, “Andy always had something interesting to say, sometimes accompanied by a slightly darker comment that gave one pause for thought. I didn't alway agree with his critiques but I always found much to learn from his comments. I always looked forward to reading his reviews. I wish him well.”

“It was a privilege in the fullest sense of that word to work with Andy over the 30-plus years that I was The Eagle’s arts editor,” said Borak. “When I came here in April 1986, he taught me some of the ropes based on his own training and skills as an editor. What impressed me the most working with him was the knowledge he brought to his craft; the elegance of his writing, which is always about the music, never about him. His work ethic is of the highest standard. He is tough, uncompromising, a professional’s professional.”

Excerpts from The Eagle’s recent interview with Pincus follow, lightly edited for length:

A look back: Catching birds is part of the job for this Pops conductor, July 28, 1979, by Andrew L. Pincus

Q: How and when did you first discover your affinity for music?

A: One night, when I was 6 or 7, I was in bed, supposedly asleep, when I heard my parents playing what I found out was Beethoven’s Violin Concerto on the phonograph. The response was so lasting, so permanent, it just stayed with me, so whenever music came on, I listened.

Q: Did you take up an instrument?

A: I did. Clarinet in elementary school. At Dartmouth, I took theory, harmony, orchestration. I had a vague idea of becoming a conductor; I’d put on a recording and practice in front of a mirror. At New England Music Camp near Waterville, Maine, my mentor who conducted the student-faculty orchestra recognized I had no skill or talent whatsoever. Then I was drafted into the Army, posted in Germany as an infantryman but became a clerk-typist and also the company’s “troop information and education officer.”

Q: Where did you first meet your partner Kate?

A: It all began at the summer camp, where she was a flutist and librarian. Kate came over to Germany and we were married there. An old-fashioned romance is what it was, with a common interest in music. [Kate, a professional hand-weaver and longtime owner of the Weaver’s Fancy shop in downtown Lenox, died in May 2019].

Q: After two years in the Army, what came next?

A: I got a master’s degree in the English department at Rutgers and did most of the coursework for a Ph.D. aiming to become an English professor. But I didn’t like the academic life, so much fighting over so little. So I walked across the street to the New Jersey Press Association office, and got a job at the Netcong-Stanhope News, a tiny weekly, where I was editor, reporter, ad salesman and deliverer. That’s where I got my basic training in journalism, learning to do everything. Then, a big step up to the Newark Evening News as a reporter for three years.

A: I was on a very large weekly in Somerville, N.J. But after three years, the editor wasn’t retiring and the paper wasn’t going daily. It was a dead end. So I walked across the street to the library and saw an ad for an editor job at The Berkshire Eagle. Three weeks later, I was living in Richmond and working at The Eagle as the page one editor, a really important job.

Q: When were you tapped to succeed Jay Rosenfeld as classical critic?

A: I never thought of being a music critic. But after eight years at The Eagle, I thought maybe it would be fun to do something else but not full-time, just something else in my life to get back into music. It was Milton Bass [then the arts and entertainment editor] who got me the job. My first BSO Tanglewood concert was in the summer of 1975. After one of my first reviews, which was a pan, a BSO member tapped me on the shoulder, told me I had written a bad review, and then said, “Do it again.” That’s when I learned to be as honest as I can, be respectful, don’t go out to hurt people, but if it’s bad, say it’s bad, in nice language, but don’t sugarcoat it. That was a great lesson.

Q: How have audiences changed over the years, if they have?

A: I think they remain fairly stable in size, taste and level of education. We have a good local audience for off-season concerts. At Tanglewood, the programming is not just old chestnuts, but shorter pieces so if you don’t like one, there are three more.

Q: What trends do you expect?

A: It feels like there’s an increase in Pops and Pops-style programs, it’s not overwhelming the classical stuff but it’s beginning to be the camel with its head under the tent. Pops is a legitimate part of the BSO, so I would expect even more of that.

Q: Looking back, how would you sum up the role of a critic?

A: To me, a critic is an educator in the broadest sense of the term, using his or her knowledge and experience to illuminate music for others. A great thing about classical music and opera is that you can always go deeper. Agree or disagree, a good critic enriches your listening and your life.