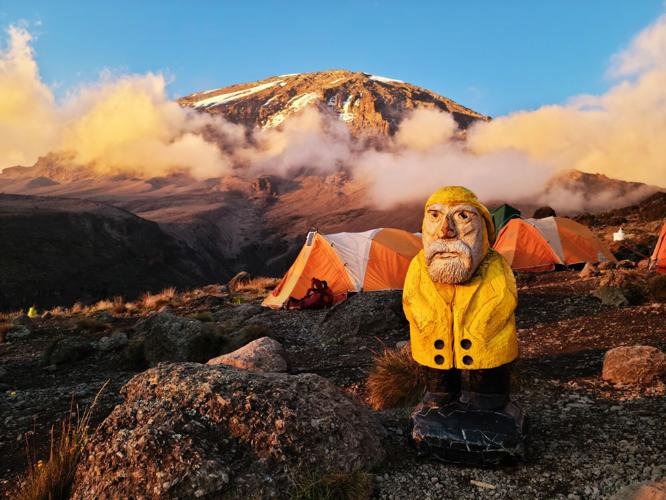 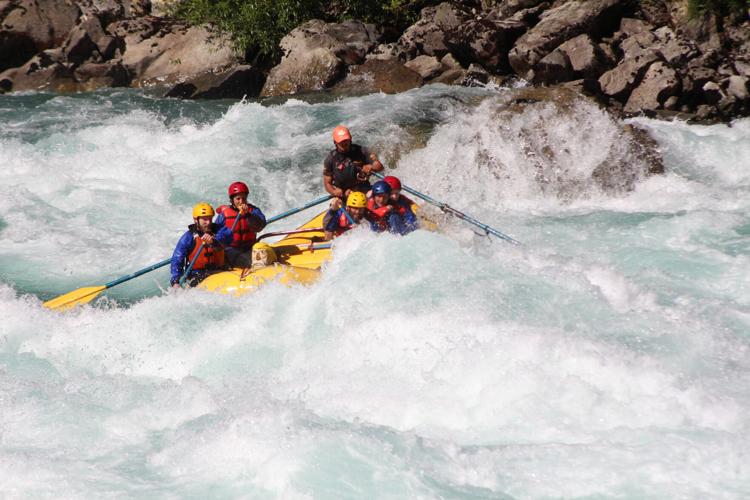 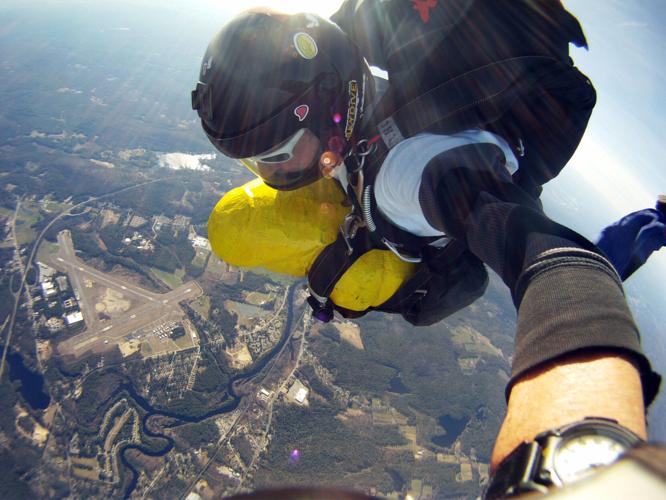 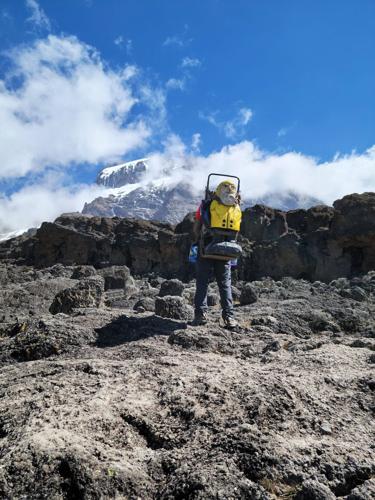 Geeg Wiles hiked Mount Kilimanjaro, with Ahab on his back, earlier this year. 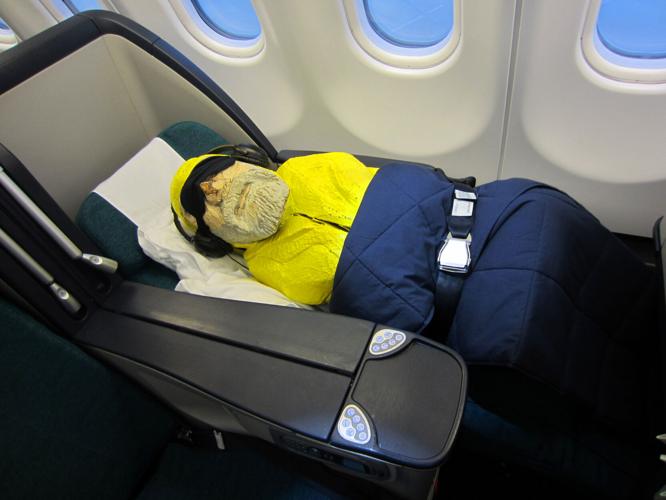 Captain Ahab never gets checked as luggage. He's a carry-on that often gets special treatment. Once, he was given his own seat in first class. Most recently, he flew to Tanzania in a plane's overhead baggage compartment.

NORTH ADAMS — When Geeg Wiles arrived to hike Mount Kilimanjaro in Tanzania earlier this year, he brought an unconventional piece of gear: a roughly 40-pound wooden statue of a fisherman named Captain Ahab.

His guide told him that the porters, the people who carry items like tents and food for hikers, could not take it up the mountain.

“No, I plan to carry it,” Wiles told them. And the group of guides and porters started laughing, Wiles said, “laughing about the task that I put in front of myself.” At 19,431 feet, Kilimanjaro, a dormant volcano, is the tallest mountain in Africa.

But he made it, and along the way, Ahab caught people’s attention. “Four days in, it spread all over the mountain, and he became the grandfather of Mount Kilimanjaro,” Wiles said.

Wiles, who grew up and still lives in North Adams, has taken Ahab on numerous adventures — whitewater rafting, skydiving, to kiss the Blarney Stone in Ireland, to the Iowa State Fair, to the New York Comic Con, and to various national parks. He puts photos of “Ahab’s Adventures” on Instagram and on his website, ahabsadventures.com. Wiles also speaks to groups about Ahab.

He has a message he’s trying to spread: “The focus of this is just sort of asking yourself how heavy your excuses are. And instead of letting them burden you, finding ways to relieve that burden. Whether it’s taking five minutes out of your evenings every day to sort of learn more about a skill you need to solve that or whether it’s asking your friends for help, because you don’t have those answers.”

Though Ahab travels the country and world with Wiles, you might also spot him riding through North Adams in the back of Wiles’ pickup truck, fittingly with the license plate “AHAB.” Ahab could ride in the front passenger seat, but he’s less noticeable there, Wiles said.

“Sometimes when I pass people, they point and laugh or smile or something. And somebody around them can tell them their version of our story or fill them in. And it’s an icebreaker in that sense, it starts conversations between people that wouldn’t normally happen … It makes people curious. And they let their guard down, and I get to have genuine conversations with strangers constantly.”

Ahab — named after Captain Ahab in Herman Melville’s “Moby-Dick” — and his mission trace back about 80 years to Wiles’ grandfather Frank Schmidt.

When Schmidt was about to enter World War II with the U.S. Navy, he and his friends set out to pull a harmless prank to raise their spirits, Wiles said. They recruited, or stole, a lawn ornament they named Ahab.

After the war, Schmidt and those friends would gather at a house in upstate New York, in July, where they would play a card game, Wiles said.

“Whoever won the game didn’t win the pot [of money] at the end of it, but they won [the right] to pick the destination for Ahab. And they would take a week and bring him somewhere else every year,” Wiles said. “The point of Ahab was to make them always get back together, to always make an excuse to get back together.

“They would say, ‘We have to take Ahab somewhere’ and it became this high-priority thing. And even though it was a silly excuse, it’s the silliest excuses that always make the best stories and the best adventures.”

When Wiles turned 19, he got Ahab.

“It was passed on to me with just the goal to keep him off the lawn as much as possible … get him out of his comfort zone at all times.”

Hiking Kilimanjaro was a way to do that. He and Chuck Soha, who Wiles met growing up in North Adams, climbed Mount Greylock regularly to train for their trip.

The company guiding the trip carried shelter and food for the group, but figuring out how to carry Ahab was a challenge. “Normally I shoulder him, I just carry him like an ‘80s boombox on my shoulder,” Wiles said. To hike the mountain though, he modified a big game hunting backpack.

Though Soha hiked with him, it was Wiles alone who carried Ahab.

“That was a very specific rule that I made,” Wiles said. “I’d rather turn around then have other people finish this for me if I couldn’t make it.”

They made it to the top of the mountain, but traveling with a 40-pound, 3-foot-tall statue has its challenges, like airport security. Checked as a bag, Ahab ends up rolling around on the conveyor belt, Wiles said, so he takes him on the plane.

“People looked at him like had three heads when he said he wanted to bring it on the plane,” Soha said, of their trip to Tanzania. Ahab ended up flying in the flight attendant’s baggage compartment, Wiles said.

“All of the people sort of running the day-to-day with the plane usually find it humorous enough to put him somewhere funny on the plane or in that extra seat … He’s even flown first class because people enjoyed it so much.”

Wiles often meets new people through Ahab and helps address items on their bucket lists. After Justin Jesser met Wiles through the Red Bull Flugtag Philadelphia challenge — a competition in which people launch homemade flying machines — they took a road trip to Kentucky and Tennessee. They went to Mammoth Cave National Park with Ahab.

“I gotta say, the experience was absolutely amazing. Not because it’s breathtaking — it’s absolutely gorgeous,” Jesser said, “but the response people had was curiosity. The permission for curiosity is wide open when you see something strange and different.”

When traveling, people will see Ahab and ask Wiles about it, sparking a conversation, Jesser said.

“He tends to draw a crowd,” Soha said, remembering a time when they were together on the National Mall in Washington, D.C. “When he’s marching around with that thing people just kind of gravitate towards them.”

“It’s just more of showing up to a place and seeing and interacting with people, seeing how we can interrupt their just normal cycle of every day or get people to look up from their phone or whatever they seem to be distracted by, and make a new friend or get motivated to dust off that bucket list, whether it’s written down or it’s just mentally, you know, established in your head. It’s just to remind you that time goes by far too quickly and you should be pursuing these things, even if it’s at the five minute capacity every day.”

He has delivered that message to students, speaking at a variety of educational institutions, including Western Colorado State University. “That’s when Ahab started funding his own trips. And it wasn’t me just working odd jobs to do these little extra things anymore,” Wiles said.

Wiles has spoken more locally, too. For the past few years, he has presented to students at Smith Vocational and Agricultural High School in Northampton. Principal Joe Bianca said he heard about Wiles and Ahab through a friend.

“We use him as that setup for setting your bucket list and what are your goals for the next five years and beyond,” Bianca said. The talks also are about “being able to set your goals and going for them. And being your authentic self.” Wiles is slated to speak to students there again in the fall.

This summer, Wiles plans to travel to Acadia National Park with Ahab, and a new beer may be on the horizon.

“I won’t say which companies, but we’re working with a few breweries … He’s gonna have his own grog soon that will be canned,” Wiles said.

Longer-term, Wiles dreams of having an exhibit displaying thousands of photos of Ahab in the Massachusetts Museum of Contemporary Art. “We have over 10,000 pictures already of him all over the world,” he said.

In the meantime, each year Wiles plans to add another dash to a 19-dash-long line tracing down his arm from a skull and crossbones tattoo.

“Every year I get a dash,” he said. “We’ve mapped that out to go hopefully another 40 years.”

Greta Jochem can be reached at gjochem@berkshireeagle.com

2022 was a tough year in many ways. But while life struggled to return to something resembling normal after two years of a pandemic, there was…