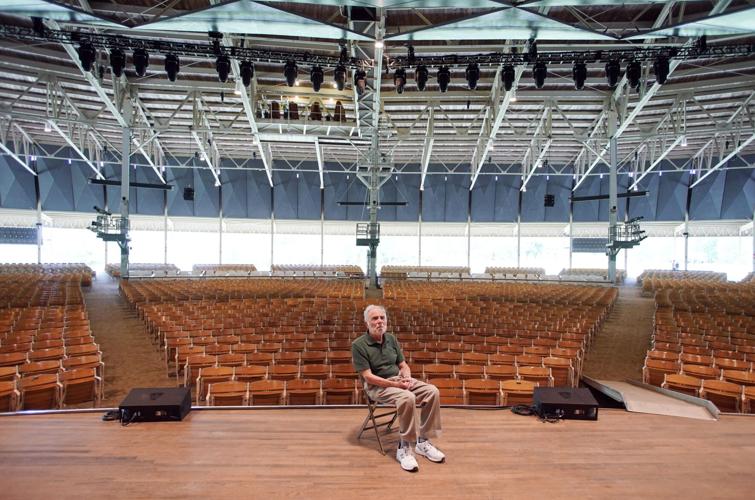 Andrew L. Pincus has been The Eagle's classical music critic for 46 years, much of that time was spent listening to and writing about the greats who have performed in the Tanglewood Shed over the years. 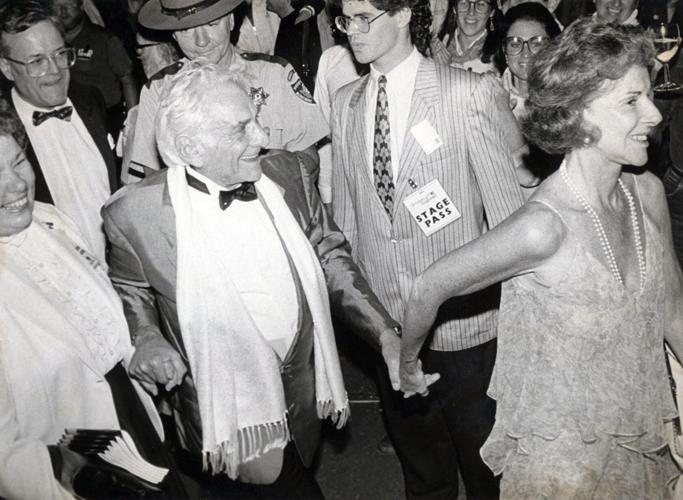 Arriving for a gala concert in honor of his 70th birthday, Leonard Bernstein strides into the Shed at Tanglewood, August, 25, 1988. Photo by Susan Plageman. 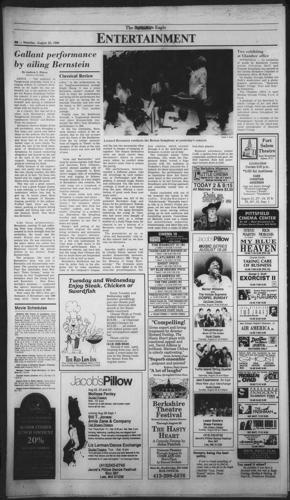 This Eagle page shows Andrew L. Pincus’ review of what would be Leonard Bernstein’s final performance, on Aug. 19, 1990, before his death two months later. Pincus would later call Bernstein’s conducting career “the greatest of any American.” 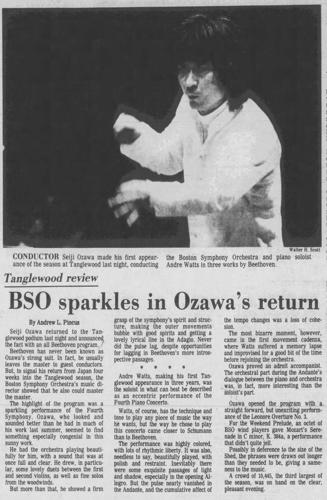 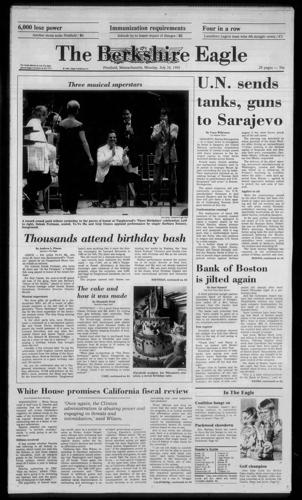 A classic trifecta: In recapping 1995’s “Three Birthdays” celebration of Itzhak Perlman, Yo-Yo Ma and Seiji Ozawa, Eagle music critic Andrew L. Pincus wrote, “Tanglewood hadn’t seen anything like it since the four-day houseparty for Leonard Bernstein in 1998 on his 70th. The place was bulging.”

And so, goodbye. After 46 years as The Eagle’s classical music critic, I’ve put down my pad and pen. I won’t be covering Tanglewood this summer. Or concerts beyond that.

I haven’t lost my appetite for music. But after all those concerts night after night followed by the rush to the computer morning after morning, there comes a time when the body says: “No more. Give it up.”

Music critic might seem a narrow specialty. Not entirely. Exploring and sharing the subtleties of a great art form is a challenge and a satisfaction. Everything from joy to sorrow, love to death, is in that music, waiting to be more deeply experienced.

Although I majored in music at Dartmouth and played clarinet and piano (both badly), I didn’t set out to be a music critic. I had been an editor at The Eagle for seven years in 1974 when the then-critic, Jay Rosenfeld, died (reportedly after 55 years on the job).

“Agreement or disagreement with the critic isn’t the point. If I made people think about what they heard or were about to hear, I did my job.”

Looking for a diversion, I volunteered for the extra duty and began working four weeknights and some days at the desk and spending weekends covering Tanglewood or other musical assignments. For 11 years, I was able to handle both jobs. But Tanglewood was growing.

In 1975, when I arrived, there was no midweek recital and chamber series. There was no Bernstein Campus, Ozawa Hall or Linde Center for Music and Learning. Like today, there were eight weeks of three Boston Symphony concerts in the Shed, each with its Prelude concert. There were student concerts and occasional guest recitals. But that was all.

The midweek series began in the old Theater-Concert Hall in 1978. Now you could hear one or more concerts up to six days and nights a week. Beginning in 1994, Ozawa Hall and the Linde Center, which followed in 2019, provided more modern venues. In terms of both programming and audiences, momentum picked up.

Contrast that with the upcoming season. With Ozawa Hall, Linde and the 5,000-seat Shed in full operation, concerts, rehearsals, classes, discussions and other presentations, some involving crossover attractions, are scheduled one after another — up to three a day — on most days. It can be a dizzying assortment, with broad popular appeal, all preceded and followed by a heavy-hitting Popular Artists season. Under the new management team headed by President-CEO Gail Samuel, the BSO seems to be casting the net ever wider for audiences.

At Tanglewood, I chronicled all this concert-giving and property expansion, plus the departure of two music directors — Seiji Ozawa and James Levine — in disfavor, even disgrace. Outside of Tanglewood, I toured with the BSO, freelanced for The New York Times and other publications, and covered the opening of Ozawa’s Saito Kinen Festival in Japan. Along the way, I wrote three Tanglewood-inspired books about music and musicians. I was now so busy that after 11 double-duty years I left the editor’s job and went freelance.

The young Ozawa trailed brilliance and promise when he arrived at Tanglewood as BSO director in 1974. I arrived a year later, which means I covered all but the first year of his 29-year reign.

His last years went sadly downhill. In 1996-97, he ousted the four highly-respected leaders of the Tanglewood Music Center, the festival’s renowned academy, accusing them of disloyalty. Faculty protests and resignations ensued. The malaise seemed to spread. BSO performances turned routine. Ozawa resigned soon after and left in 2002.

After an interregnum, Levine arrived, setting the place on fire with his programming and performances. Sadly, he trailed physical problems and rumors — later confirmed by investigation — of sexual misconduct. The combination of liabilities did him in. After ever-increasing absences and cancellations, he was told to go.

Not exactly the kind of backstage machinations you expect at a festival known for its bucolic picnicking scene on the lawn as music from the Shed wafts by.

My reporting on the Ozawa spat got Clarence Fanto, then The Eagle’s managing editor, and me put through a BSO public-relations wringer, including a confrontation with Ozawa in Boston. I’m proud that my coverage — based on off-the-record sources, of probably the lowest moment in Tanglewood history — has held up despite strenuous denials. The music center, fortunately, stabilized under new leadership.

Now it’s Andris Nelsons’ turn. In his eighth season as music director, he and the BSO seem to be still forging a partnership. In the BSO’s partnership with the Leipzig Gewandhaus Orchestra, he has also taken on the German orchestra’s direction. Meanwhile, Gail Samuel, who was formerly president of the Hollywood Bowl and CEO of the Los Angeles Philharmonic, has succeeded BSO President-CEO Mark Volpe. Tanglewood is likely in for further change.

Nobody could be around Tanglewood during the Leonard Bernstein years without being aware of his dominance during his two-week residencies. With his hugging, kissing, cigarettes and rehearsal and personal demands, he virtually took over the place. Excess ruled.

Bernstein could be hard to take with his grandstanding, but his concerts with the student orchestra and BSO were electric. Already dying, he could barely make it through to the end of his final BSO concert, in 1990, which was also his final concert anywhere. His death was a great loss.

A look back: A towering presence at Tanglewood — Andrew L. Pincus’ obituary on Leonard Bernstein

Bernstein and Ozawa were responsible for the four most memorable concerts I heard at Tanglewood. Bernstein gave me my first live performances of Mahler’s Ninth Symphony and Beethoven’s Missa Solemnis.

To this day, the Mahler Ninth is so sublime yet so painfully death-haunted that I am simultaneously drawn to it and repelled by it. After the revelation of the Beethoven mass, I made a vow to myself that I would listen to it at least once a year, on recording if not in concert. To me, it is probably the greatest single work ever composed (you are free to disagree).

Ozawa was masterful in two works by Benjamin Britten. He led the profoundly pacifist “War Requiem” with conviction born out of his growing up in wartime Japan (he said he actually saw the pilot of an American fighter plane as it flew by low overhead). Similarly, Britten’s opera “Peter Grimes,” with alternating student casts, drew an unforgettably anguished picture of the fate of the loner in society.

It takes a combination of arrogance and modesty to be a critic. You sit in judgment of those who know more about music than you do, yet out of study and experience you can hope to enlarge people’s understanding of great music. Agreement or disagreement with the critic isn’t the point. If I made people think about what they heard or were about to hear, I did my job.

To musical institutions championing a great tradition in a time of COVID, I say: Keep up the good work. To musicians I may have wronged: Apologies. To readers who put up with me: Thanks.

A century of musical greatness

As Andrew L. Pincus steps away from the critic’s keyboard, one should rest assured that The Berkshire Eagle will continue previewing and reviewing the Boston Symphony Orchestra’s Tanglewood performances, along with many other notable concerts held there and throughout the Berkshires. But today belongs to Andy Pincus, for he deserves a day on this stage.

When one realizes The Eagle has had just two classical music critics over the course of the last 101 years — Mr. Pincus with the last 46 years and Jay Rosenfeld with the first 55 of them, that’s impressive on its own.

And when one realizes that messieurs Pincus and Rosenfeld chronicled an arc of world-class music in the Berkshires led by the 20th century’s masters — Koussevitsky, Bernstein, Ozawa, Copland — one can only conclude it’s been an era that defies replication. That Mr. Pincus and his predecessor did, in fact, document it — thoroughly and faithfully — speaks to the enduring civic, cultural and historical value of music journalism.

The Eagle and its family of readers thank Mr. Pincus, a maestro in his own right.