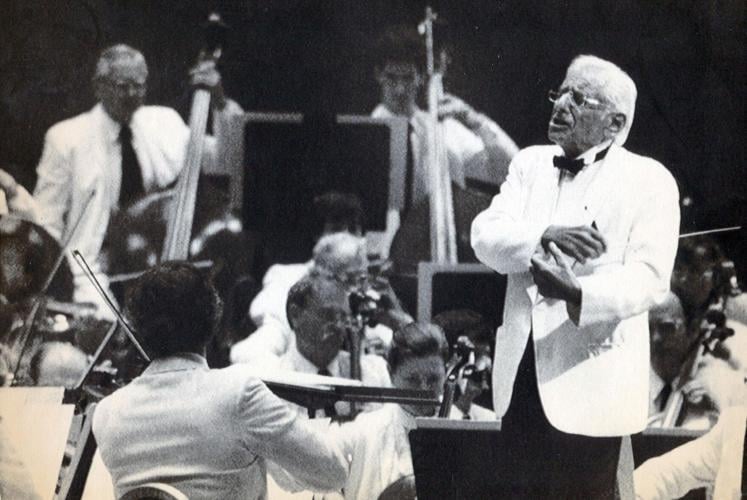 Leonard Bernstein is shown conducting his last concert on August 19, 1990 with the Boston Symphony Orchestra at Tanglewood in Lenox, Massachusetts in the Shed. Bernstein died at the age of 72 in 1990. 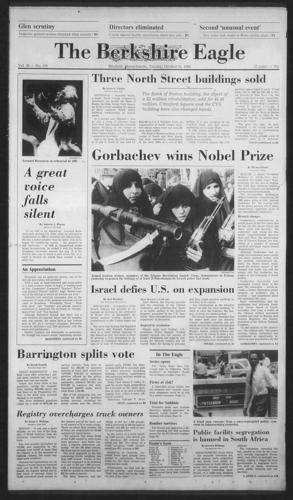 Under the headline “A great voice falls silent,” The Berkshire Eagle front page of Aug. 19, 1990, shows Andrew L. Pincus’ reflection on the life and impact of Leonard Bernstein.

"In my end is my beginning," Leonard Bernstein said, quoting T.S. Eliot, when he returned to Tanglewood in 1988 to celebrate his 70th birthday. He was a better prophet than he knew. Just as he began his conducting career — the greatest by any American — in 1940 at Tanglewood under Serge Koussevitzky, he ended it with his Boston Symphony Orchestra concert last Aug. 19 at the festival that was so much a part of his life. It is hard to believe he would have wanted it any other way.

Bernstein was an authentic genius, one of the few any generation will produce.

With a man so many-talented and many-sided, it is hard to know where to begin in looking back at him. Conductor? Composer? Teacher? Television pioneer? Pianist? Author? Sage? Mortal man, full of the failings to which all mortals are prey?

Posterity will certainly remember him as the composer of some of the greatest musicals ever to come to Broadway. "Wonderful Town," "West Side Story" and "Candide" are already classics, enshrined in American life as firmly as "Huckleberry Finn" and "Tom Sawyer."

Although Bernstein denied that there was a wall between his popular music and his symphonies and operas, the latter have a less certain grip on life. As a "serious" composer, Bernstein could be derivative and flirt perilously with the banal and sentimental.

Mahler, Copland and Stravinsky, in particular, flit through his concert music. Something second-rate — something that tries too hard to be serious and ingratiating at the same time — hangs over such works as the "Jeremiah" Symphony, "Trouble in Tahiti" and "Mass."

“Arias and Barcarolles,” the last piece of his to be performed at Tanglewood, strikes supercool poses — amid moments of genuine tenderness — that betray pain Bernstein never brought himself to deal with head-on.

But there was nothing second-rate about Bernstein the conductor. He was supreme in Mahler, a composer whose driving neuroses seemed to resonate within Bernstein, and he could find depths in Beethoven, Brahms and Tchaikovsky that came from a Mahlerian grip and vision.

Indeed, he would speak of his special ability to understand and even mentally recompose the music of others because of his own experience as a composer.

Although much of Bernstein's popularity was due to his success in using television, he was one of a handful of great conductors to emerge in the post-World War II era. It seems more than coincidence that the period's only other surviving titan, Herbert von Karajan, died only a year earlier, and under similar circumstances.

Critic's Notebook: Music lays down a path toward harmony

In the spring of 1989, Karajan, crippled by a back ailment, relinquished the podium of the Berlin Philharmonic, the orchestra he had molded into a personal instrument during a 34-year reign. That July, at 81. he was dead.

Bernstein gave up his major music directorship, that of the New York Philharmonic, in 1969.

Since then, he had made a career of guest-conducting the world's major orchestras, maintaining especially close ties with the New York Philharmonic, Vienna Philharmonic and BSO at Tanglewood.

It was only within the last year that his lung ailments, aggravated by his lifelong love affair with the cigarette, forced him to cut back a hectic, sometimes frantic schedule.

When his illness became so pronounced that he had to cancel his postseason tour of Europe with the Tanglewood Music Center Orchestra and then give up all remaining conducting engagements, it seemed that he, too, had cut himself off from the life that nurtured him. He announced his retirement from the concert stage only last week. Now he, too, is dead.

History holds other parallels. In the previous generation, Wilhelm Furtwangler and Karl Boehm also continued to conduct until their health and strength gave out. But probably the most striking precedent is provided by Arturo Toscanini.

At Tanglewood, Koussevitzky is in everything

Despite failing health, Toscanini continued to conduct the NBC Symphony Orchestra until a 1954 concert in which his fabled memory failed, just as Bernstein's lungs failed during a terrifying lapse in Beethoven's Symphony No. 7 at Tanglewood. Shortly afterward, Toscanini announced his retirement, as did Bernstein. The fiery Italian lived on for three years before dying at 89.

Bernstein could be, and often was, faulted for neglecting contemporary composers and concentrating on the European classics and a handful of favored Americans, most of them oriented toward traditional tonality, as he was himself.

Indeed, toward the end, he gave up conducting most moderns — an exception was his friend and Tanglewood mentor Aaron Copland — and refined his conceptions of works by the European masters.

As he did so, his tempos grew slower and he looked more deeply inward, not just toward the emotion behind the music, but at the inner musical detail.

Only a few weeks ago, a BSO string player said in conversation that where other conductors tend to look at either the forest or the trees, Bernstein was the only one who could show musicians the trees one by one and then fit them together into a towering forest.

James Orleans, a BSO double bass player, describes the experience in "Sennets and Tuckets," the book of reminiscences, that the BSO published in honor of Bernstein at 70.

Recounting the open rehearsal preceding Bernstein's 1985 Tanglewood performance of Brahms' Symphony No. 1, Orleans says: "From the opening C minor chords of the symphony, I felt it was destined to be a momentous event. The involvement onstage was total. I felt the energy from every member of the orchestra. I remember distinctly the B-major chord of the first movement's second ending appearing to me for the first time as emanating from a great pipe organ, the sonority of the orchestra was so astonishingly rich."

At the end, Orleans says, "Not a soul in the orchestra was left untouched by the experience. They had all been moved to involve themselves completely, to spend themselves fully in service to the music and Bernstein's vision of it."

Carl St. Clair, one of the thousands of young musicians whom Bernstein also inspired to heights beyond what they thought themselves capable of, recalls a similar experience from a student conductor's point of view.

He tells how, in Tanglewood classes and rehearsals, Bernstein "never forces anyone to conduct the way he conducts" or "how to hold your mouth and feet and chest and eyes — none of that. For him, it all comes from the music."

In 1985, St. Clair was one of three student conductors chosen to appear with Bernstein during a Tanglewood Music Center Orchestra concert honoring Copland on his 85th birthday. He was to lead a performance of Copland's Clarinet Concerto. He recalls Bernstein's total understanding and support.

Backstage just before the concert, St. Clair says, Bernstein asked his conducting corps: "'How are you feeling? Doing OK?' At one point, he said, 'Are you nervous?' and I said, 'I'm really nervous …' and he said, 'You'd damn well better be, because this is important. If you weren't nervous, I'd kick you in the rear end!'"

Remembering Bernstein's inspiration, Copland's presence and the waves of appreciation flowing from the crowd, St. Clair concludes: "I'm still feeding off the fuel ignited that summer."

The dark side of Bernstein's love of young people was the way he fed off their adulation. When he talked about music in his seminars at Seranak, he could be as revelatory as he was in bringing out Brahms' sonorities and inner detail. At other times, he would go into rambling discourses on politics, philosophy, poetry — anything that happened to engage his interest.

It wasn't that his views were uninteresting. But they were more or less conventional liberal views, such as led him into his famous "radical chic" party for the Black Panthers during the 1960s.

And it was hard to escape the feeling that Bernstein was grandstanding with his knowledge, wowing the kids, partly because he was no longer a kid himself but hated to lose that youthful spark. Perhaps for the same reason, he was the only Tanglewood conductor who partied till dawn with his student players after a concert.

If there was an element of show in these extramusical performances, they were like his famous leaps on the podium: an integral part of an extravagantly gifted man.

Audiences sometimes complained, but the physical energy — the show — was inseparable from the mental energy and the highly charged musical output. Similarly, Bernstein could have become a virtuoso pianist if he had directed his energies that way. He was a fair poet and an eloquent speaker and writer.

As a teacher, Bernstein had a rabbinical streak. There was never any doubt, moreover, that his liberal views were sincerely held. From his Harvard days on, he was an outspoken foe of patriotic cant and defender of social justice — a conviction that led him, on the one hand, to reject a medal from the Bush administration and, on the other, to lead his hastily arranged, slapdash "Freedom Concert" performances of Beethoven's Ninth Symphony in Berlin last Christmas.

At Tanglewood's new Learning Institute, music is a gateway to ideas

Bernstein gave eloquent utterance to these views in "The Principle of Hope," his address opening the 1970 session of the Tanglewood Music Center. At the height of the Vietnam War, he stood before the students and told them that if anybody could save the country and world from "the flag-wavers and bigots, … it's you, the best generation in history."

"And especially you here today, artists of that generation. Because it's the artists of the world, the feelers and the thinkers, who will ultimately save us; who can articulate, educate, defy, insist, sing and shout the big dreams."

There will be many memorials to this dynamic, hugely talented and sometimes exasperating man. But he himself created one of the most memorable ones at Tanglewood last summer.

At the end of the BSO performance of his "Arias and Barcarolles," he walked onstage to embrace Carl St. Clair, who had taken over the rehearsals and performance when Bernstein couldn't do them. St. Clair had never even considered becoming a conductor until 1974, when as a farm boy in a dusty Texas hamlet, he happened upon a telecast of Bernstein conducting at Tanglewood. And now he was a BSO assistant conductor — the new generation taking over from the old, carrying on the tradition, just as Bernstein had when he took up the baton from Koussevitzky.

Bernstein was a man of passion and commitment, not just to music, youth and Tanglewood, but to the world. He was a hero in a time full of idols but desperately short of heroes. A great voice will no longer be heard.

Andrew L. Pincus has been only the second critic in that post for the past 100 years, a likely record for a non-metropolitan paper.