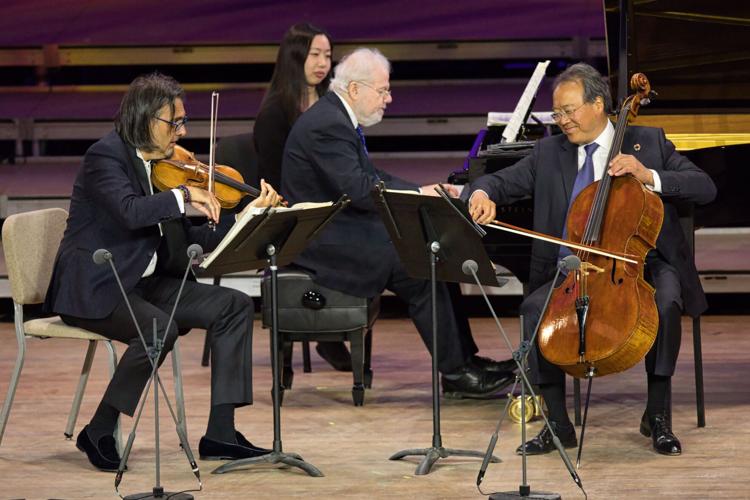 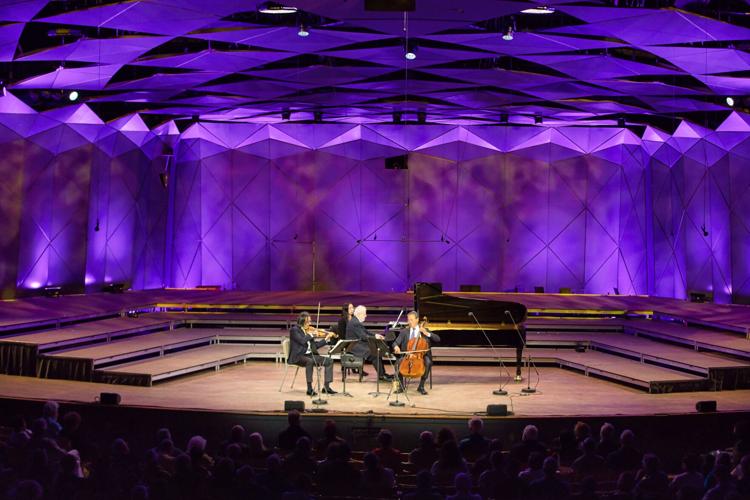 Violinist Leonidas Kavakos, pianist Emanuel Ax and cellist Yo-Yo Ma were the only performers on the stage Friday night. 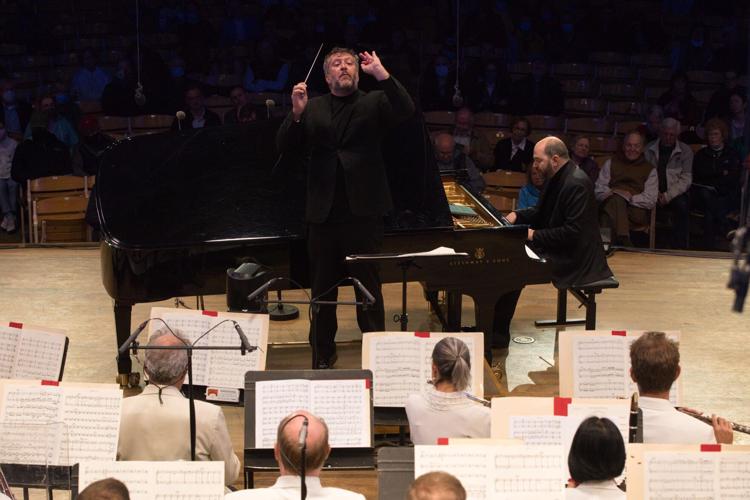 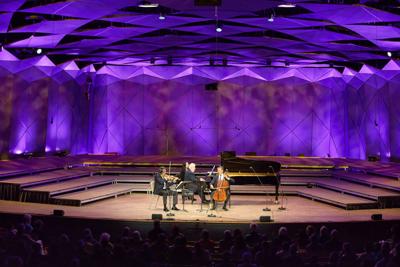 Violinist Leonidas Kavakos, pianist Emanuel Ax and cellist Yo-Yo Ma were the only performers on the stage Friday night.

LENOX — A violin-cello-piano trio doesn’t belong on the stage of the Tanglewood Shed. Unless, of course, the players are Leonidas Kavakos, Emanuel Ax and Yo-Yo Ma, who gave an all-Beethoven program there on a refreshingly cool, clear evening Friday.

Fans in the large crowd loved it, bursting into applause at every opportunity. But, necessity ruled. A program that would have been at home in the 1,200-seat, enclosed Ozawa Hall in a normal year was transported to the 5,000-seat, open-air Shed, where sound seemed to come from afar. Despite Ax’s care with dynamics, the program sometimes seemed like a piano recital with string accompaniment because of the piano’s superior power.

What can you do? These three are admirable musicians, both individually and as an ensemble. On the lawn, where the music is amplified, hearing might have been better. From a seat in the center of the Shed, where amplification is a no-no, all a listener could do was strain his ears and think: next year, next year …

The program, clearly intended for popular appeal, was Beethoven, but with an unusual twist. Instead of two of Beethoven’s seven piano trios, it began with the third, Opus 3, No. 1, and went on to Beethoven’s own arrangement of his Symphony No. 2 for piano trio.

Such arrangements were common in Beethoven’s day. Symphony orchestras were not common, but amateurs who played chamber music for pleasure in their homes were. Besides, sales of the arrangements brought the composer money. In a spoken welcome from the stage, Ax described the Second Symphony arrangement as an “approximation” of the original.

In the third of his youthful set of trios, Beethoven already is showing the world he’s the master. It is in the fraught key of C minor (think: Fifth Symphony) and the players brought out the bold strokes of drama but also the touches of humor that sometimes lie below the surface. The contrast was a lifelong Beethoven characteristic.

The symphony arrangement reversed the mood. Although many nuances were lacking, the jokes, surprises and outright ebullience emerged as best they could in approximation. A highlight of the evening was the easygoing flow of Ax’s playing in the genial slow movement.

Whoops of delight from the audience greeted the familiar strains of the encore: the first movement of Beethoven’s Fifth Symphony, also in Beethoven’s arrangement. C minor sealed the evening.

Saturday night’s Boston Symphony Orchestra concert seemed to carry a philosophical message — something to the effect that times have changed, but beauty and humor remain.

Thomas Adès, the BSO’s composer-conductor artistic partner, led a smartly played program framed by two Haydn symphonies. The 64th, titled “Tempora mutantur” (“Changed times”), set the tone, though not very ominously. The 45th, the “Farewell,” with its gradual walkout by the players, leaving the conductor to beat empty air at the end, rounded the little drama off to perfection. Most of the audience was caught unawares by the players’ exits.

Adès’ Haydn is a wonder: crisp and clean, with sections of the orchestra speaking to one another as if in person. Both symphonies came across with shadings of expression — stormy, pastoral, graceful — clearly defined. If the “Farewell” ended without the usual dimming of lights as the players left the stage one by one, well, Haydn had his little joke.

The humor in Stravinsky’s jazz-inflected 1924 Concerto for Piano and Winds is of a solemn, poker-faced kind, turning Haydn’s classicism on its head for changed times. Kirill Gerstein came on to play the knuckle-busting solo part with demonic intensity and an occasional touch of plaintiveness. Adès led the BSO’s winds and double basses through thickets of tart harmonies and jagged rhythms.

Like an enchanted isle, Adès’ own “O Albion,” for string orchestra, cast a tranquil hush amid its sometimes stormy surroundings. (Albion was an old name for Great Britain.) The three-minute piece, which suggests the sound and mood of Vaughan Williams’ “Tallis” Fantasia, is one of six “idylls” Adès originally composed for string quartet. The whole set would be worth a listen.

In his first trip to the Tanglewood podium since 1999, Alan Gilbert, former director of the New York Philharmonic, had the BSO playing for him like old friends, in the two BSO first performances. If Schumann’s “The Bride of Messina” Overture, based on a scabrous but forgotten play by Schiller, wasn’t as blood-curdling as it set out to be, it was startling enough with its blaring brasses and racing strings.

The Serenade in F by the Swedish Wilhelm Stenhammar (1871-1927) followed a more leisurely course. Gilbert described the five-movement piece as a “love child of Strauss and Sibelius.” Or it might be of Tchaikovsky, who, like Stenhammar, conceived his “Souvenir of Florence” serenade during a trip to Italy.

In any case, the Swede’s serenade has an outdoorsy feeling, with seeming allusions to Italian tunes, as it winds its way through a waltz, a scherzo and the like to an extroverted conclusion. It’s an attractive work, worth discovery, but as it rambles on for 40 minutes, it is, let’s say, a bit long.

The afternoon’s soloist was Stefan Jackiw, who pushed and pulled Mozart’s Violin Concerto No. 5. He seemed ill at ease onstage.

Why did Yo-Yo Ma perform at Pittsfield vaccine site? It turns out, he couldn't leave his cello in the car

Yo-Yo Ma went on “Today” on Tuesday to explain how his impromptu cello performance at a Berkshire County vaccine site over the weekend came to be.

PITTSFIELD — After Yo-Yo Ma received his second jab of a COVID-19 vaccine at Berkshire Community College Saturday, he transformed his 15-minut…

PITTSFIELD — Residents may have noticed the flatbed truck carrying a unique wooden structure driving around the city on Tuesday. It was a traveling stage that, over the past few days, has …