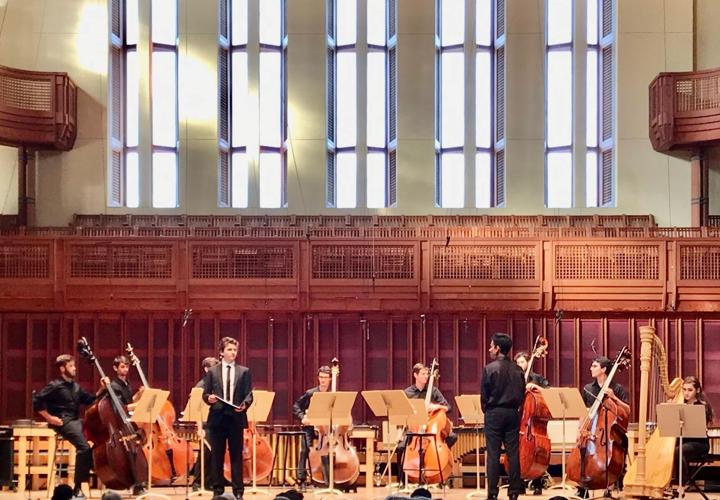 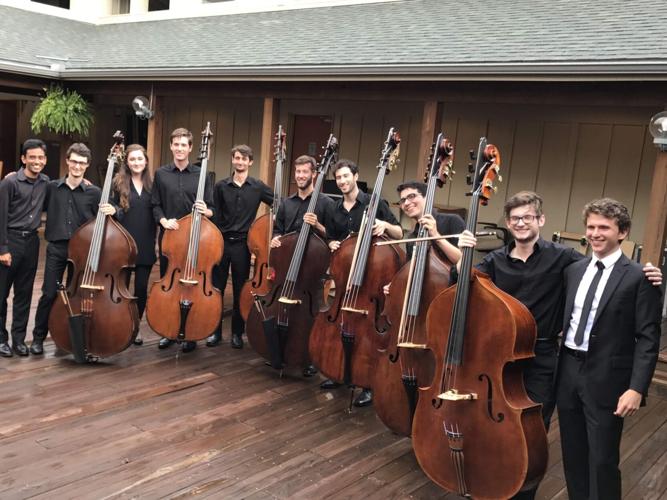 LENOX — At most classical orchestral concerts, the double bass section saws away intently with little recognition, tucked away to the side like wallflowers at a wedding. Unless jazz is on the bill, string chamber ensembles neglect these purveyors of the lower register almost entirely.

Where: Linde Center for Music and Learning, 3A West Hawthorne Road, Lenox

Tanglewood Music Center, however, offers orchestral bass players the chance to shine, thanks to frequent commissions of new works for ensembles of seven double basses.

“The TMC summer usually starts with a string quartet seminar, which means the basses and rest of the orchestra have to find other projects to do during that one- or two-week period,” Seeber said, adding that seven bass fellows are in residence each summer.

While TMC often commissions works for brass and percussion, and cantatas for singers — at the same time supporting former TMC composition fellows — there was very little repertoire for basses, he said. About a decade ago, “we started with [longtime TMC director] Ellen Highstein to commission new pieces for bass septet. There were these great young composers and super-talented bass players coming to Tanglewood that can play anything.”

In the case of Balliett’s work — the composer was also a TMC bass fellow — “they agreed to include a singer and a harp player, which really makes that piece fabulous,” Seeber said.

Seeber coached the TMC Fellows for both bass septet premieres; and two of those musicians return to perform in the Linde Center concert.

Besides the logistics of assembling seven basses, it’s not surprising the pieces have not been performed since their debuts.

“It would be one thing if the pieces were easy,” Seeber said. “They’re really difficult, super-virtuosic showpieces for the instruments, so we need really great players.”

“Both are written in a very egalitarian way,” added Levy. “There’s no one part that is more or less difficult, they’re all equally difficult in their own unique way.”

Balch’s other work has been commissioned and performed by orchestras from Los Angeles to London, France and Japan. In July she joins the faculty at Yale. She writes that she named her 10-minute composition “Kalesa Ed Kaluca” by linking the first two letters of the names of bassists that taught and inspired her.

“She’s a great instrumental composer,” Seeber said, “The piece is full of energy and has beautiful harmonies. It’s really colorful, lots of fabulous crystalline sounds, high percussive sounds, it sounds like much more than basses playing. She uses chopsticks inserted into strings that are flipped and vibrated, high harmonics and other extended techniques.”

“Balch was a composition Fellow at TWD in 2018, and has written other chamber works for bass, and two works for Eddie Kass, who commissions a lot of works for bass and soprano. They were friends at school together.”

Balliett bills himself as a composer, poet and bassist. Once a student of Seeber at Harvard, he now teaches period double bass at Juilliard. A prolific performer, he hosted a new music radio show with his twin brother, Brad, and, with The Oracle Hysterical, presented hip-hoperas and rap cantatas across the U.S. and Europe.

“He’s a pretty intense individual, and a great player,” Seeber said. “If you go through his playlist, he’s done an incredible variety of stuff from almost pop sounding to super edgy new music.”

“It’s very colorfully done,” Seeber said. “Each bass takes on a different animal in these beast fight pairings, so you [mostly] have two basses at a time, dueling. There’s a lion versus a crocodile, an eagle versus a snake, a polar bear versus a walrus, and lastly a panther against a human, played by the harp. The tenor is both singer and narrator, sort of this Trump-ian game show host. It’s very satirical and a little dark.”

The audience loved the piece when it was premiered at Tanglewood, he said.

Additionally, the bassists will present a selection of Bartok’s 44 duos, using a cello transcription.

“They are originally violin duos, melodies he adapted from folk songs,” Levy noted. “We thought it might be cool to do a Round Robin and leapfrog down the line of seven bass players.”

Levy joined the BSO bass section in 2003, while Seeber has played with the orchestra since 1988. It’s the first time they have performed at Tanglewood’s spacious Linde Center, which opened in 2019.

Levy, who came up with the original concept, added, “We were supposed to do this program in Boston in April 2020 and, of course, had to shut everything down, as did the rest of the planet.”

Over the years, Seeber has seen a burgeoning interest in bass performance, both by bass-centric and established composers.

“They are writing incredibly interesting, challenging pieces for bass,” he said, “it’s being included much more regularly in new music and chamber music. It was always the odd man out in string chamber music for generations. Now composers are discovering there’s this amazing array of sounds it can produce.

Levy added, “As the technical prowess and mastery of the double bass has become more widespread, and the level of players so much better, composers realize there are almost limitless opportunities for what you can do on double bass.”

Despite relaxing its COVID-19 health and safety guidance, the Boston Symphony still recommends masking for its indoor Tanglewood spaces, including Ozawa Hall.