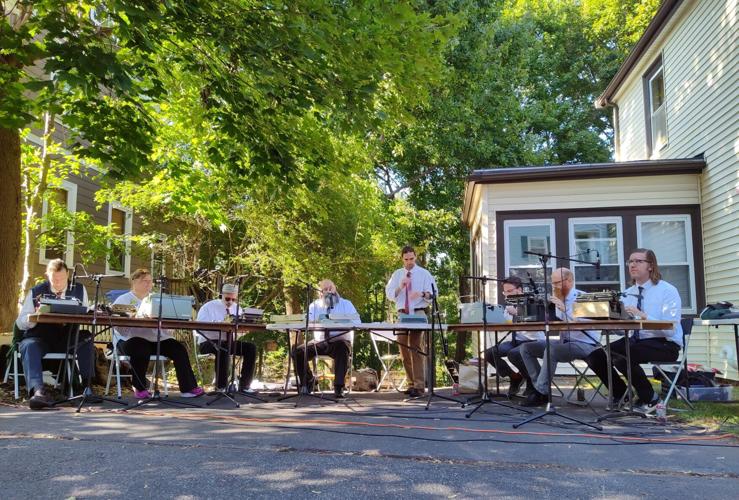 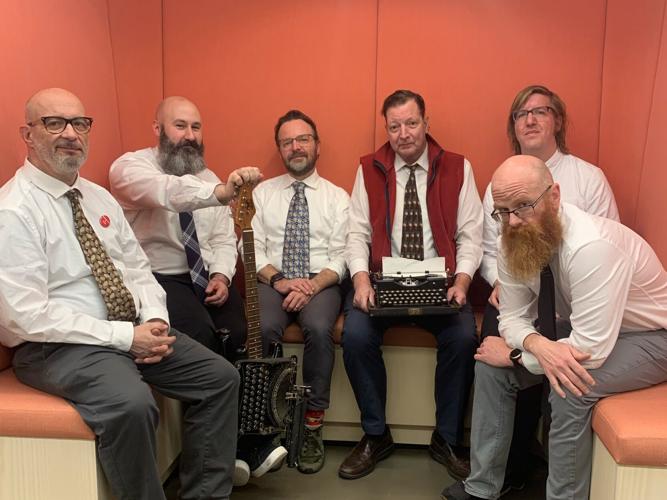 The Boston Typewriter Orchestra will perform at TurnPark Art Space in West Stockbridge on Oct. 1.

The Boston Typewriter Orchestra will perform at TurnPark Art Space in West Stockbridge on Oct. 1.

WEST STOCKBRIDGE — While classically trained percussionists sometimes use unconventional items — from wooden planks to bowls of water — to create sounds for orchestras and ensembles, perhaps no instrument is quite so strange as the typewriter.

Famously entering the orchestral canon in composer Leroy Anderson’s iconic 1950 work “The Typewriter,” first performed by the Boston Pops, in modern times the machine’s musical potential has been fully embraced by a dedicated ensemble of concert typists, The Boston Typewriter Orchestra.

The eight-member group will visit the Berkshires on Saturday, Oct. 1 to perform an outdoor concert of original music for typewriters at TurnPark Art Space, a sculpture park in a former quarry.

The commercial typewriter has been around for more than 150 years, becoming both a blessing and bane of typists around the world. BTO uses a variety of instruments in their performances, going back to the massive desktop models of the 1910s and 1920s, which can weigh as much as 40 pounds.

Derrik Albertelli, the orchestra's spokesperson, explained in a recent phone call, the group’s origins were quite accidental. Former member Tim Devin was noodling around on a typewriter his girlfriend had given him as a birthday gift, much to the annoyance of nearby waitstaff. “It’s OK, I’m the conductor of the Boston Typewriter Orchestra,” Devin is reported to have quipped.

“He thought, maybe there’s something to this, and called a bunch of us to see if we wanted to get this idea off the ground,” Albertelli continued. “And we’ve been doing it ever since.”

Clad in the BTO uniform of white office shirt and tie, the musicians perform solely on manual typewriters. Typically they remove ribbons and eschew paper to maximize the sound of the type head hitting the metal platen roller. Desktop bells that recall carriage return alert pings are used for punctuation.

The group has amassed about three typewriters per person, he added.

“We use desktop models manufactured from the 1910s and 1920s to the 1960s, Underwoods, Royals and old Smith-Coronas that were massive. We also have portable models like the Smith-Corona Galaxie, Olympia, Remingtons," he said. “We don’t use anything too nice or refurbished as they do get beat up, so we try to use typewriters that have been through the ringer a bit.”

The instruments produce quite a tonal range, he explained, “Larger desk models move a lot of steel, the shift key bounces the carriage and makes a really good thump. Smaller portable models have a higher, snappy sound. There are other features we can exploit, we try to find everything we can possibly do to add variety.”

Occasionally they’ll play two at once.

But don’t expect the natural end of carriage “pings” to be part of the choreography, Albertelli said. They’re entirely random, and just happen in the course of playing. With so many different machine sizes, “it would be nearly impossible for us all to reach the end of the carriage at the same time — we’d have to be geniuses.”

The group writes their own rhythm-driven songs, with office-themed titles such as “Mail Guy,” “Typing Pool,” and “At the Staff Meeting.” Their only cover tune is a showcase rendition of “Wipe Out,” the dynamic 1960s hit by the Surfaris. An extensive BTO discography includes titles such as “The Revolution Will Be Typewritten!,” “Overtime at the Piano Factory,” and “Workstation to Workstation.”

“The main conceit of BTO is that we’re working in some unnamed company,” Albertelli said. “We have interstitial banter bits to break up the noisiness of our set that we think are funny, but are really just a bunch of dad jokes.”

They can’t do much in the way of melody, he added, as they can only generate notes from their mouths. “We have a couple of main singers and the rest do back up. A few songs are structured instrumentals. Some are chants and more free form; when it starts to get on our nerves, we just count it out.”

Concerts last around one hour, “with a five minute break for our fingers and our audience’s ears,” Albertelli said.

Musicians hail from diverse backgrounds. Quigley builds crosswords for a living; he’s kind of a rock star in his field, Albertelli said. Keene does site admin for University of Conn., Brockman works for Harvard’s School of Government. Holman is in bioinformatics, O’Grady is a banker, and Albertelli, Mecagni and Mazzulli are all librarians.

“Alex, Jay and I have been together from the very beginning,” Albertelli said, noting they find recruits by word of mouth through friends. “If people are interested we’re more than happy to have them on board.”

While most of the machines are black or gray, one favorite is a tribute to rocker Eddie Van Halen’s legendary guitar.

“We had a lipstick red typewriter,” Albertelli said, “and Chris put white and black electrical tape on it. It’s kind of quiet so we don’t really use it, but as a visual we love it.”

The group has performed around the Northeast at clubs, parties, museums and libraries, up to one or two gigs a month at times.

“We’ve got to New York, [Washington] D.C., Chicago and New England,” Albertelli said. “We all have day jobs, so it’s not like we can really take this on the road.”

The Chicago event was the only time they traveled by plane, and they certainly caught the attention of TSA agents, he reported.

“When the typewriters went through the X-ray, the kid was like, is that a typewriter? What is this, another typewriter? He couldn’t believe it, he’d never seen it before, it was just hysterical.”

They also appear regularly at the annual QWERTY Festival at a Drive-In movie theater in the Catskills.

“They’ll have type-ins before they show typewriter-themed movies,” Albertelli said. “Because Tom Hanks is such a champion for the instrument, they’ll show his movies such as ‘Catch Me If You Can’.”

Media coverage over the years has included network TV and radio. They also appeared in the 2016 documentary “California Typewriter,” celebrating a shop in Berkeley, Calif., that sadly has since closed.

“Filmmaker Doug Nichol asked if we wanted to be an example of the fun and interesting ways typewriters are still being used,” Albertelli said. “We were really excited to be part of it.”

Featured typewriter aficionados included Pulitzer Prize-winning historian David McCullough, playwright Sam Shepard, and, notably, actor Tom Hanks, an avid typewritten letter correspondent, including recently with a collector in nearby Stephentown, NY. In 2020, while Hanks and his wife quarantined with COVID-19 down under, he gifted his Corona typewriter to a young Australian boy also named Corona who wrote to him out of concern and revealed he was being teased about his name at school. In recent years, Hanks has downsized his collection from 250 to just 120.

BTO audiences run the gamut of age groups, Albertelli said. “At almost every performance, somebody will come up to us and say, I learned to type on this machine. Or a little kid that has never seen a typewriter and probably will never come across one again. Kids are tactile to begin with, so we let them poke around after we’re done. They’re fascinated, it’s kind of cool to see.”

The concert was organized by TurnPark program coordinator Michelle Kaplan.

“I have a show ‘Mishmash’ on community Berkshire Radio every Thursday from 7 to 9 p.m., and was playing their tracks,” said Kaplan by phone. “I play an eclectic range of music and do interviews, every week is totally different. And their music is definitely unconventional.”

“And I just love typewriters,” she added. “I have a Royal that I’ve had for a couple of years, and I like to send mail art with hand-typed messages. I think typewriters are making a comeback, some people are just obsessed.”

Shaker Mill Books owner Eric Wilska has a typewriter collection in the barn across the street, she noted. “He’s going to keep it open for the event, so come early and check it out,” she suggested.

BTO will perform in TurnPark’s stone amphitheater. “We’ll have cushions and chairs,” Kaplan said, “people can also bring their own seating or blankets to put on the ground.”

“We’re very open to all different forms of art at the park,” she added. Besides indoor and outdoor art exhibits, “we’ve had amazing dance performances, live music, outdoor film screenings, and comedy shows.”

“It’s the last event of the season, so we’re going out with a bang,” she said.