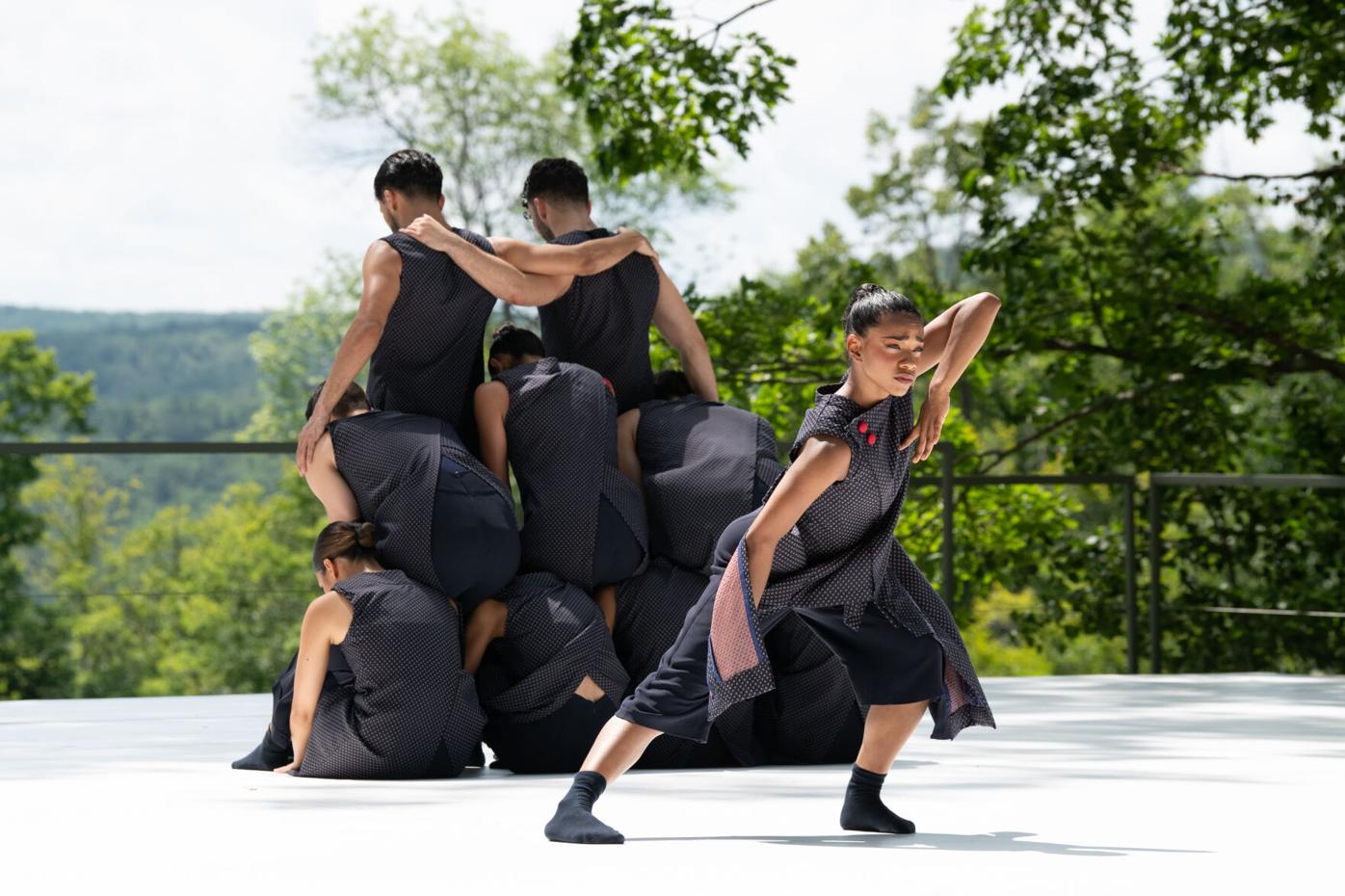 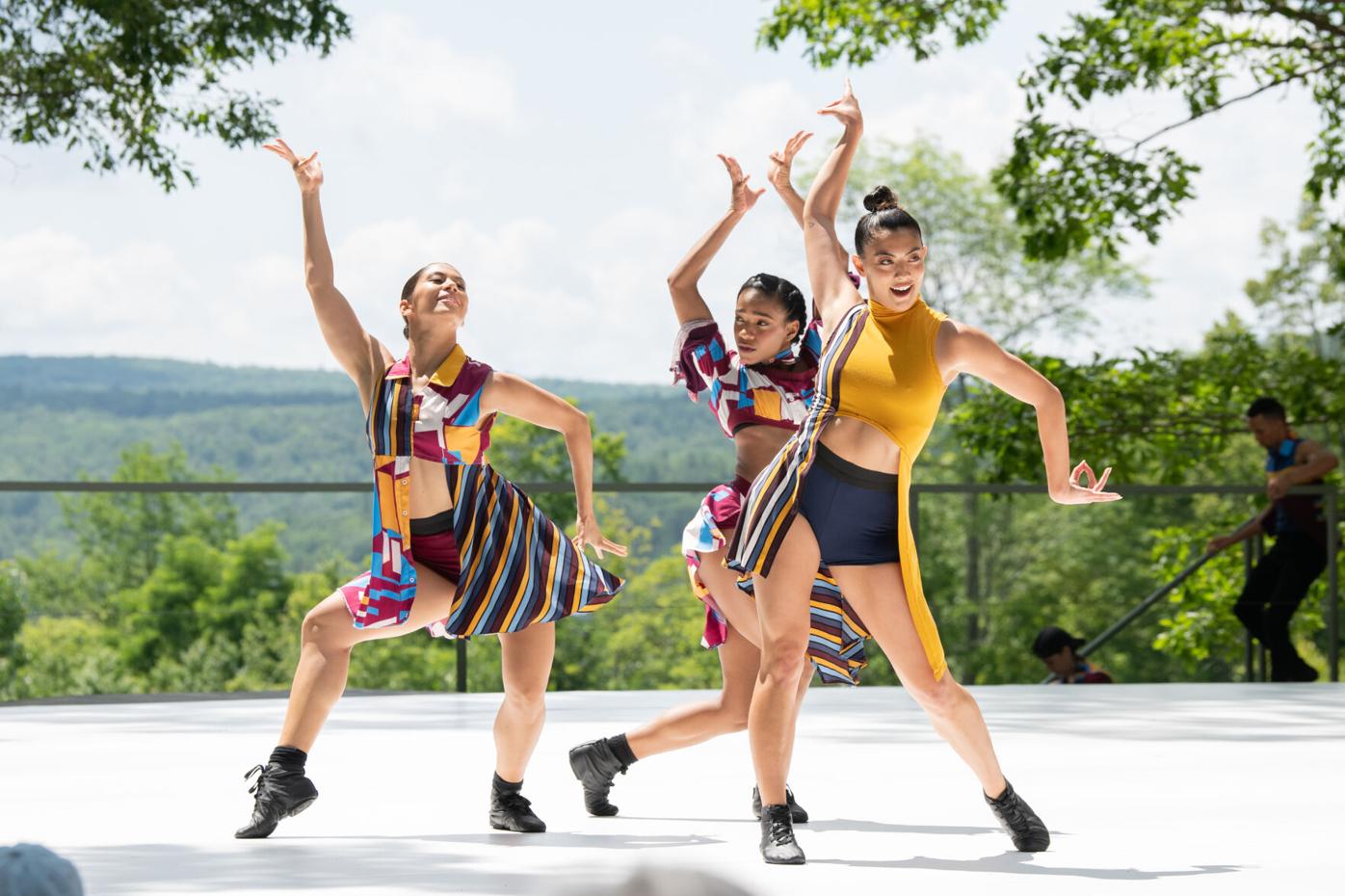 BECKET — By celebrating the golden anniversary of Ballet Hispánico during this week’s performances at Jacob’s Pillow, we are, technically speaking, a year late. No matter: With this spirited cadre of terrific dancers performing this fun triple bill, better late than never.

Founded by Tina Ramirez in 1970 and directed by Eduardo Vilaro since 2009, educating the public about Latinx art and artists is an important part of the company’s mission. Indeed, the program opens with something of a film history/cultural appropriation lesson with Annabelle Lopez Ochoa’s 2019 “Tiburones” — that’s “Sharks,” as in the nickname of the Puerto Rican “gang” in “West Side Story.” The hit 1957 musical, conceived, choreographed and directed by Jerome Robbins, was further developed into an iconic film (co-directed by Robbins, with Robert Wise) in 1961. “West Side Story's many glories are, however, complicated by some grave blunders — not only were some of the Puerto Rican characters drawn in ugly stereotypes, many of the film actors appeared in “brownface.”

Not exactly light fare, this taking on of a classic and its gnarly barnacles, and yet, while “Tiburones” has some bite to it, it has a good deal of wit, too. Composed of a series of abstract vignettes that sometimes flow organically together and sometimes end with purposeful clarity — often with the snap of a finger, a tingling echo-quote from “Story”— the dancers alternate between moving or posing per the now capricious, now calculated demands of the director, and boldly sweeping about the stage. That director, played with pitch-perfect sliminess by Chris Bloom, is more Disney villain than seriously menacing; he orders the others around by the whistle around his neck or by the (increasingly futile) snap of his clapboard. There are a few fraught scenes with Dandara Veiga, but she proves too strong to succumb to his will. Is this all too easy? Maybe; or perhaps Ochoa’s often-playful dismissal of these tropes shows what she thinks of them — laughable. Yes, there is one brief scene in which a group of women writhe and splay their bodies in cartoonish, hypersexualized positions, but the point is made deftly, without inadvertently demeaning the women nor chastising the audience.

Better yet is the way that some conventions are simply erased: the main duet (with strains of “Maria” heard now in the score), both sensual and tense, is danced by two men. Performed by Antonio Cangiano and Omar Rivera, the two circle one another, this way, that way, at first with a kind of tactile wariness, drawn to one another, but uncertain; the magnetic pulse between them is palpable, and their physical contact develops — a lean, a promenade, a lift, a bigger lift — as their human connection deepens. And when pairs of stilettos finally make it to the stage, it’s men’s feet which are so cruelly, yet glamorously, sheathed, in a funny, judiciously brief dance in which the men strut (of course) and kick and swivel.

There’s nothing to unpack in the excerpts from Vicente Nebrada’s 1982 “Batucada Fantástica,” a frolicking company warhorse set to Carnival-worthy music by the Brazilian percussionist Luciano Perrone. Three dancers, wearing brightly-colored unitards designed by Diana Ruettiger, take turns in zippy, charming, pleasantly old-school ballet-jazzy solos that have the joyous, easy nature of a dancer noodling alone in a studio, dancing just for the pleasure of dancing. Simone Cameresi flits between easy, breezy pirouettes and staccato runs into bent-kneed leaps; Shelby Colona, both cool and hot, makes long serpentine shapes with her arms here, then battements her leg, with effortless precision, to her nose; Paulo Hernandez-Farella, who moves their torso with a mixture of sharp lines and fluid undulations, finishes their solo with comic relief, faux-stumbling and crumpling to the ground after a whirlwind of turns.

Gustavo Ramírez Sansano’s 2012 “18+1” has also become a company favorite: Abounding in Sansano’s trademarks — awkwardly quirky, yet endearingly human, gestures, as well as sequences of compelling, yet simple, ensemble work— and set to music by the “mambo king” Pérez Prado, the piece is fairly irresistible, even more so given the dancers’ full-hearted and full-bodied commitment. In Ghabriello Fernando’s handsome slate-grey tunics over black calf-length pants, they look like a studious school of fish in the unison sections, moving with an eerie precision that seems ritualistic rather than rote. Their enviable group-vibe is at once mesmerizing and inviting — I had a fleeting vision of audience members rushing to join them, as if in a line dance at a wedding — while the smaller groupings offer lovely, more detailed portraits of the dancers. Especially delicious are Veiga’s and Colona’s solos; both women seem suspended in a private groove while communicating directly with each of us.

After the performance, I heard an adult behind me say, with great enthusiasm, to a child, “That’s what professional dancers look like!” You bet. Happy anniversary, Ballet Hispánico.

When: Through Sunday, July 18.