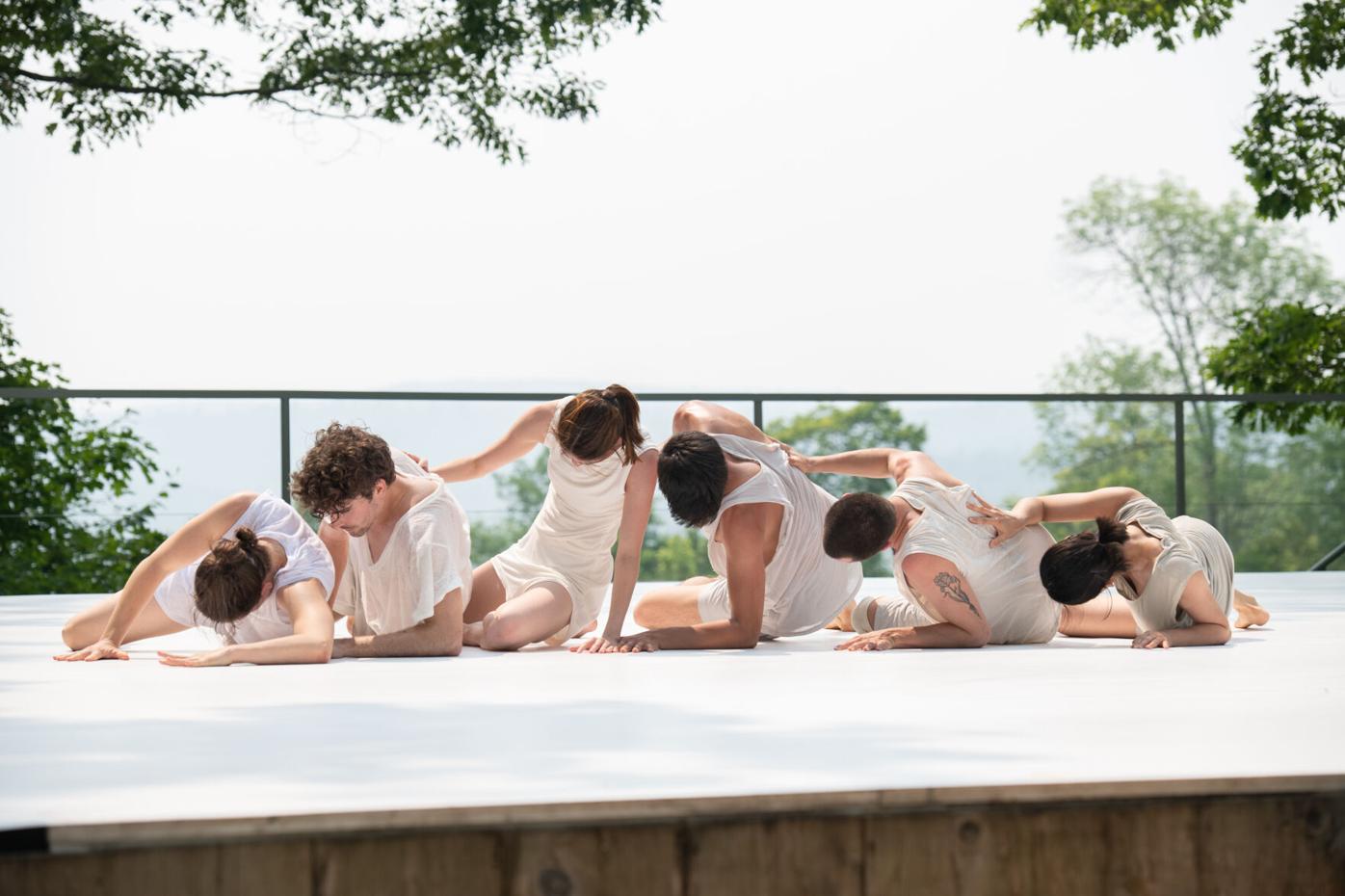 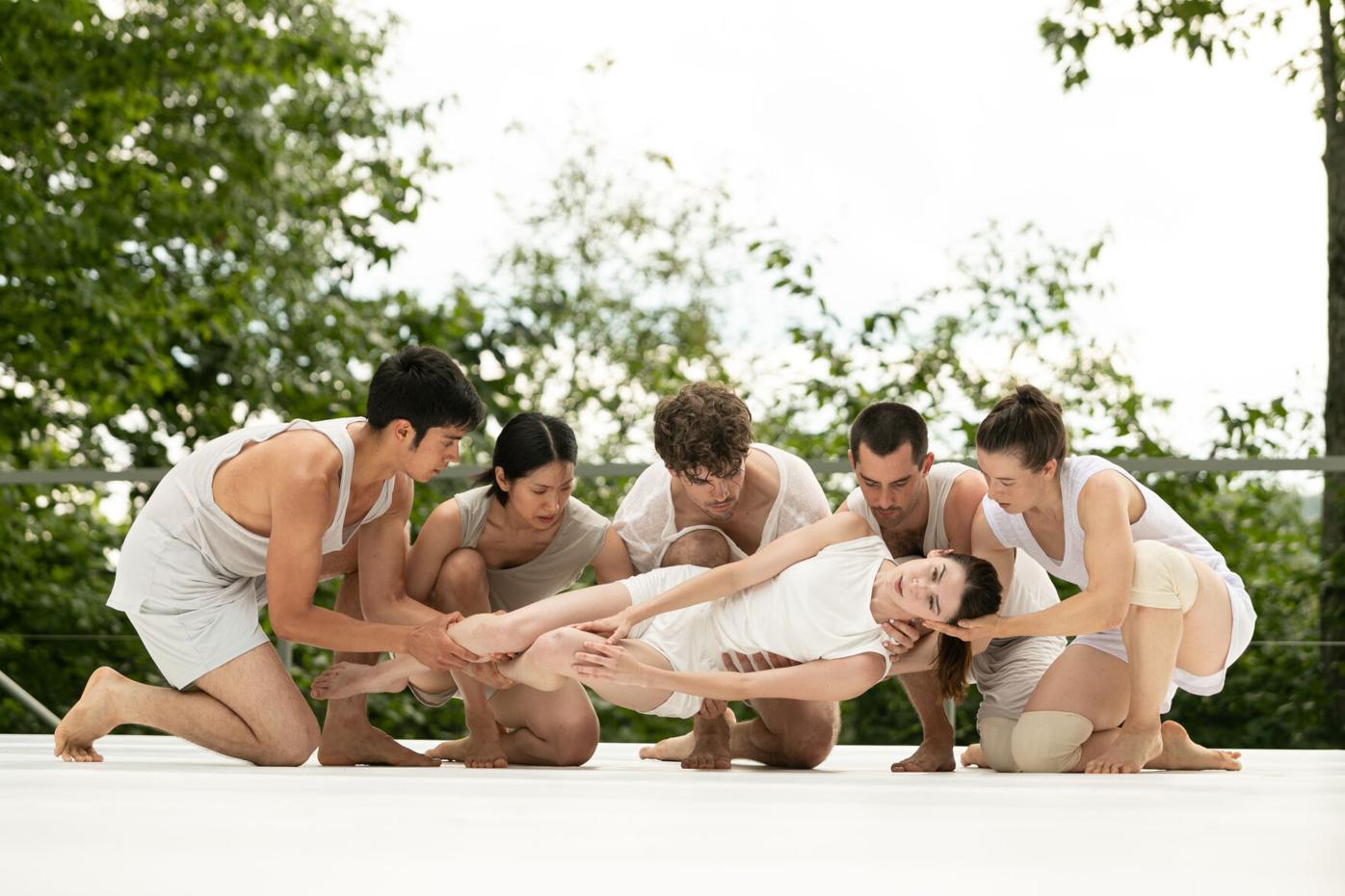 The eight dancers in postmodern choreographer and dancer Brian Brooks’ “Closing Distance” have so much physical contact, they often seem like one being. 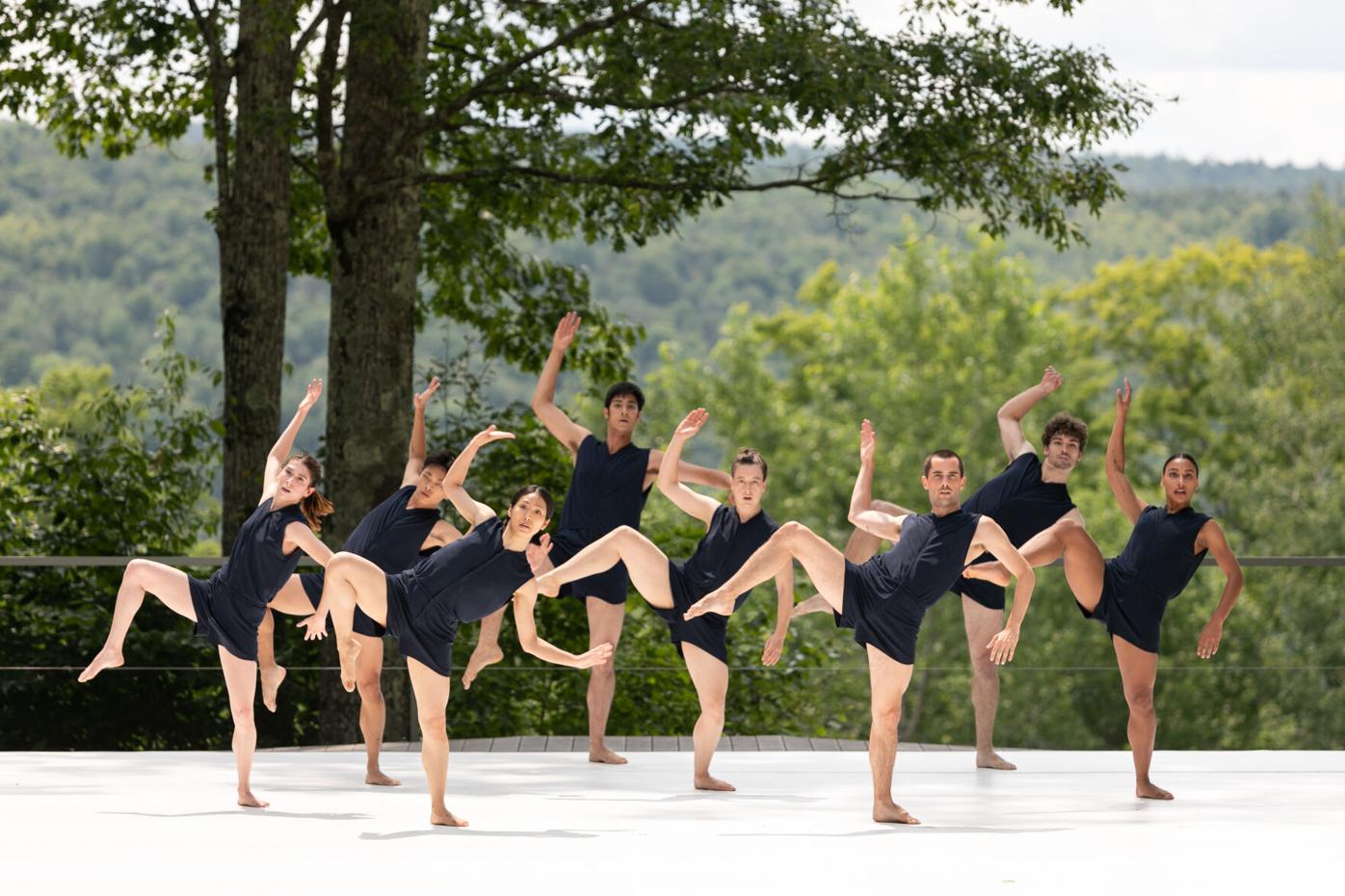 Above: Brian Brooks/Moving Company in the world premiere of “Flight Study” at Jacob’s Pillow. Below: The company in “Closing Distance.”

Cost: Free, but must register online.

BECKET — Dancers are a touchy bunch.

I’m not talking about sensitivity in the emotional and intellectual sense — though, in performance, dancers are often alert, fey, like deer in a meadow — it’s physical touch I’m referring to. Whether it’s a teacher’s guiding hand or a colleague’s supporting arm, dancers rely, profoundly, on physical touch. Is there another group who missed, as keenly, its absence during the pandemic?

But, that was then and this is now. At Jacob’s Pillow last week, the eight dancers in postmodern choreographer and dancer Brian Brooks’ “Closing Distance” have so much physical contact, they often seem like one being. Bodies slip over, crawl under, slide against and curve onto other bodies with a connection so palpable that one senses it, even the few times the dancers are physically distanced. This is more than the enigmatic “magic” that does happen, occasionally, between very attuned performers; it’s the real-life work that Brooks and the dancers of his Moving Company have invested into this gem of a dance.

Choreographed to Caroline Shaw’s ingenious Pulitzer Prize-winning a cappella composition “Partita for 8 Voices,” Brooks often layers the movement phrases for the eight dancers in canon — it’s a common choreographic device — but the way they move — so tactile, so hushed, like subtly overlapping waves — is deeply organic rather than strictly regimented.

Though many aspects of this dance are redolent of and indeed employ some of the principles of contact improvisation, this is a highly structured work. It is the epitome of seamlessness, and yet those invisible threads between the dancers, the emotional and physical trust, are as strong as a ship’s ropes.

Within the dance there is a sliding scale of physical contact: the more pronounced catches and pulls that occur in the larger groupings or the light skin-on-skin grazings of the action/reaction trio performed with sophisticated wit by Evan Fisk, Zack Gonder and Stephanie Terasaki.

But, in the poignant duet between Fisk and Carlye Eckert, actual physical contact is often absent; one hovers a hand near the other’s cheek, as if taking care not to wake a sleeping lover, or suspends their body over and in the same shape as the other’s body, as if tracing its outline in order to memorize it. Occasionally, the concept of the “butterfly effect” is evoked, as Eckert, crouching, slides her palms against the stage and toward the others; ripples cascade through their bodies a moment later.

During Friday afternoon’s performance of “Closing Distance,” as if mother nature herself were reminding us of the power of our human actions, a monarch butterfly floated, momentarily, above the stage, before continuing off and out into the gorgeous realm of the Berkshire Hills.

The dancers, meanwhile, in the world premiere of Brooks’ “Flight Study,” echo other creatures of the air, a flock of birds moving in canny tandem or with precisely flicking arm/wings. Costumed by Karen Young in simple yet flattering sleeveless short overalls, the ensemble is driven by the score — “Aheym,” Bryce Dessner’s intense, stirring work for strings — in dance phrases that alternate between a soaring, curving amplitude and sharply angled shapes.

Early in the dance, this opaque flock turns their torsos, then their heads, toward the audience, their gazes calm but full of prophecy. It’s a brief, mysterious dance rife with handsome yet odd images; with only the one viewing, I’m not sure if it feels incomplete — as if it could be the opening movement of a longer dance that further develops and explores some of the themes? — or if further viewings would prove it to be just right.

That “Closing Distance” premiered in early 2020, just before masks and the concept of social distancing became omnipresent, seems eerily prescient. It was last performed in January 2020, when the company performed last; its return to the stage last week feels triumphant, as does Brooks’ own return, in his new solo “Quiet Music,” to this particular stage.

In “usual” years, this venue (officially called the Henry J. Leir Stage, but known to longtime Pillow-ites as the Inside/Out Stage) presents up-and-coming artists in free performances, but this year all of the ticketed performances are happening on this outdoor stage, which is where Brooks’ company made its Pillow debut in 2003. Taking its title from the stark, exquisite Nico Muhly piano composition to which it’s set, Brooks moves with a deeply expressive quality, tracing a path from upstage to downstage and back again.

Though at times he treads tentatively, as if testing uncertain waters, his gaze, when facing the audience, is open, frank, trusting. With his signature liquid earthiness, he coils and uncoils his arms over his torso, as if tying himself in and out of knots; he furls and unfurls his torso with an agitated restlessness, as if trying to push out of his own skin. Though brief, the solo, as performed by the ever-compelling Brooks, is both haunting and hopeful.

BECKET — By celebrating the golden anniversary of Ballet Hispánico during this week’s performances at Jacob’s Pillow, we are, technically spea…

Janine Parker reviews Vogue legend and grandfather of the House of Ninja, Archie Burnett as he strikes a pose at Jacob's Pillow Dance Festival 2021.

BECKET — “Like Water,” one of three dances presented this week at Jacob’s Pillow by the 45-year-old Dallas Black Dance Theatre, was a birthday…

BECKET — In the program note for her “Home Studies: Parlor Floor Life,” choreographer Helen Pickett writes, vis-à-vis the process of making an…