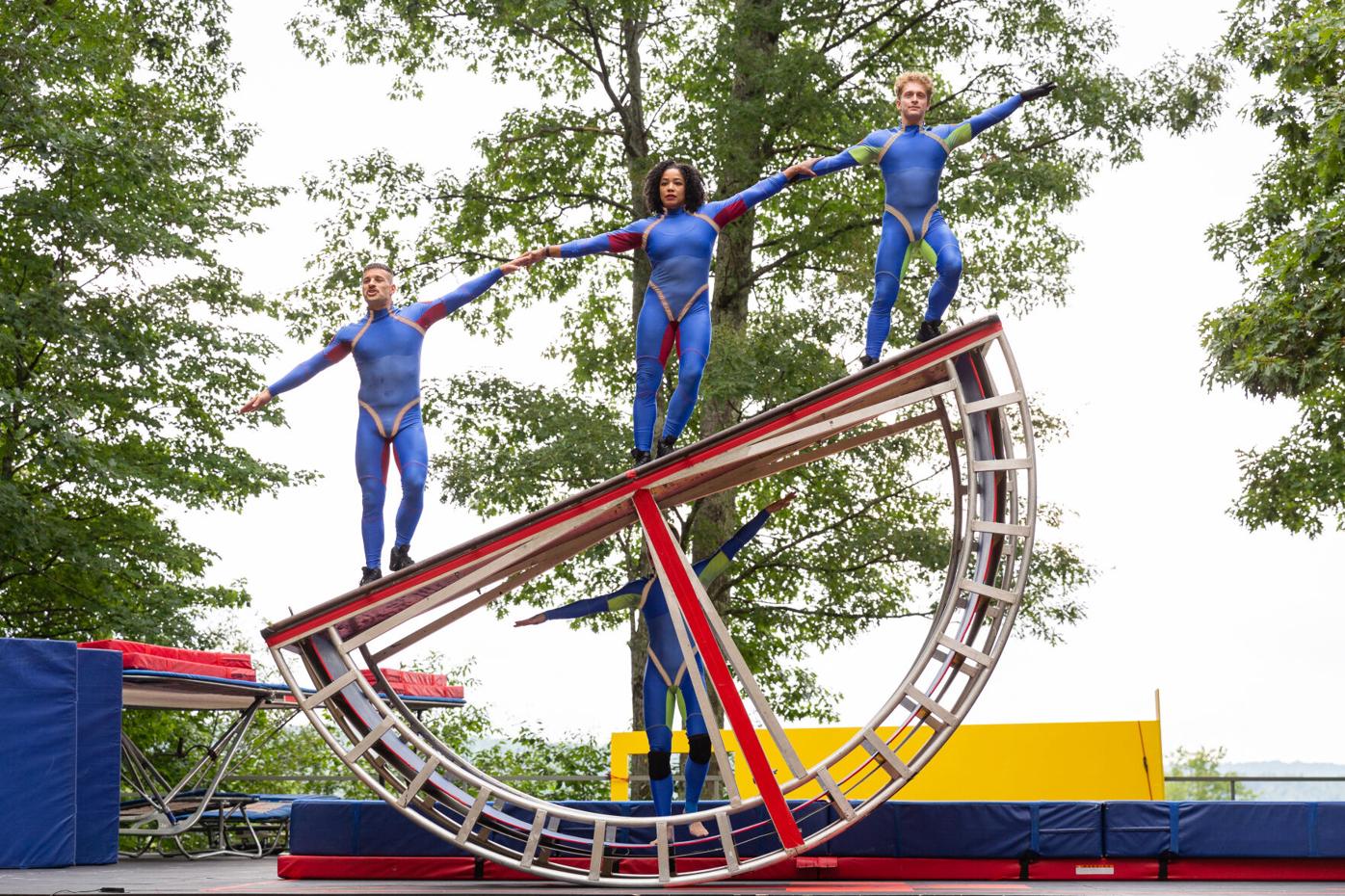 Daniel Rysak, Cassandre Joseph, Tyler DuBoys, and Jackie Carlson (below) in "Tip" in STREB: "From Ringside To Extreme Action" at Jacob's Pillow. 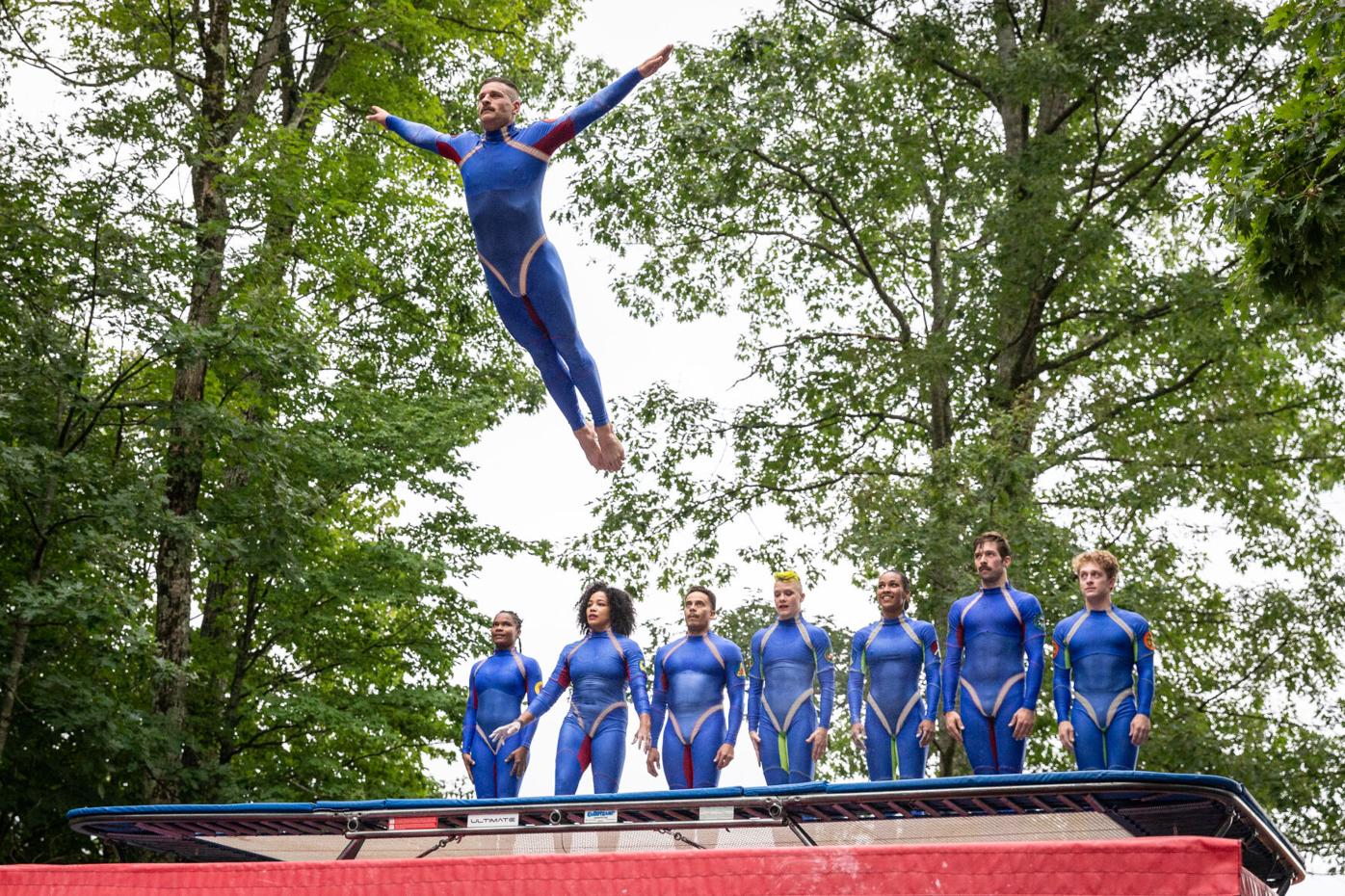 Daniel Rysak and company in "Air" in STREB: "From Ringside To Extreme Action" at Jacob's Pillow. 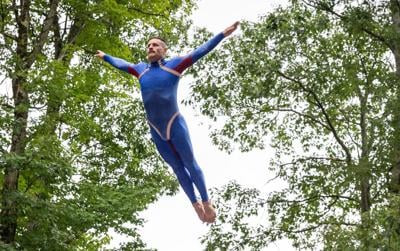 BECKET — The choreographer Elizabeth Streb has long been interested in investigating how to push human bodies beyond their usually-perceived (or recommended) limits. She’s particularly entranced by the idea of flying, but isn’t satisfied with the typical ways in which dancers effect flight or (seemingly) defy gravity. What if her dancers bounced against, rather than bounded upon, the earth?

The retrospective her eponymous company is performing at Jacob’s Pillow this week traces the development of those investigations, with solos or small group dances, some involving props of varying sizes, and one group piece that employs a large “machine.” Added to this eccentric array are enormous pieces of gymnastics equipment (mats of various thicknesses, a trampoline fit for a giant). The performers and the adroit stage crew frequently tug, push, stack, organize and reorganize these objects, as if the stage were a well-kept playroom.

And though the performers do seem, often, to be playing, with mischievous glee, many of their feats come with a serious risk, which has made some of Streb’s work controversial.

Fittingly, Streb calls her dancer/performers “Action Heroes” and they look every inch the part, in their sleek, long-sleeved, high-necked blue unitards designed by Andrea Lauer & Timberlake Studios. But unlike movie superheroes, there are no special effects, nor (since they’re actually human beings) do they possess supernatural powers. In a typical dolphin dive a dancer pitches forward onto their hands, then, in a kind of rolling handstand, undulates through their body; the landing is “cushioned” because the weight of the body hitting the floor is never concentrated in one place. Conversely, in many Streb frontal body landings, the whole body lands at once — smack! — like the worst belly flop you’ve ever experienced. Yes, this is where those thick mats come in, but a belly flop/face plant from on high is still a shock; these Action Heroes land, bounce, and usually scramble right back up to wherever they “flew” from, to do it all over again.

It’s a heady mix, this concoction of potentially perilous, but frequently witty, physicality. Also, the Pillow compilation doesn’t include some of the truly provocative work, stuff that, when I saw it years ago, made me avert my eyes: dancers not only flying/falling from very high structures but also dodging swinging or rapidly swooping steel beams. I wasn’t reviewing that earlier show, otherwise I would have been obligated to keep a keen eye on the proceedings. As it happens, woven into this show’s soundscape — curated by and presented onstage by DJ/Emcee Zaire Baptiste — are snippets of dance critics’ commentary from over the decades. Some of it is dismissive, but a lot of it is admiring, albeit (amusingly) disconcerted.

In “Buster,” from 2002, it’s a wooden beam that must be avoided, but the Action Heroes avoid getting clocked with Buster Keaton gag-worthy precision, pitching forward or backward onto the ground just before impact. The piece ends with a massive, rectangular plank, with a relatively small square cut out at one end, tipping toward associate artistic director and longtime company performer Cassandre Joseph, standing downstage. The cut-out passes just over Joseph, close enough to ripple her hair (or maybe it’s the audience collectively exhaling in relief that creates the breeze). In the 1983 “Add” it’s Tyler DuBoys’ own body that he seems to be wrangling with, as he flips forward or backward in planed positions, like a gymnast on a pommel horse. There is a similar sense of struggle in “Little Ease,” from 1985, but here Kairis Daniels has the added challenge of executing this physical drama while encased in a 3x6 wooden box in which she climbs and clings, sometimes suspending as if a spider hanging on her own silk.

The performers’ interactions with the various props make these inanimate objects seem sentient: The bouncy stick in “Pole Vaults” (1978) is like a Ginger Rogers to Jackie Carlson’s Fred Astaire, as she, gripping it horizontally, winds up and pirouettes; in “Whiplash” (1983), the rope in Daniel Rysak’s hands is a live wire, or a snake to be corralled.

In the end, it’s the big group pieces that suspend one in awe. Accordingly, the showstoppers are the show-opening “Tip” (2006), “Surface” (1993) and the finale, the 2003 “Air.” In “Tip” Carlson manipulates a giant half-wheel “machine” from its semi-circle ramp within while her colleagues surf the platform above, scampering and sliding and riding waves that often seem capable of toppling the whole thing over; in “Surface” some Heroes manage two 4x8 sheets of plywood while others scale up and scrambling down the ever-tilting planks — the nanoseconds when grasping fingers could be squashed (or whole bodies trampled) are hair-raising.

“Air” is nothing short of marvelous, as the Heroes spring and catapult from that huge trampoline. Imagine their glee to be performing this particular piece on the Pillow’s outdoor stage, where, finally, for this high-flying group, the sky is literally the limit! They bounce and fly, straight up, straight down, or tucked or twisting like Olympic divers into a pool, or elegantly angled and arced like fish into the sea, or birds swooping into infinity.

BECKET — In the program note for her “Home Studies: Parlor Floor Life,” choreographer Helen Pickett writes, vis-à-vis the process of making an…