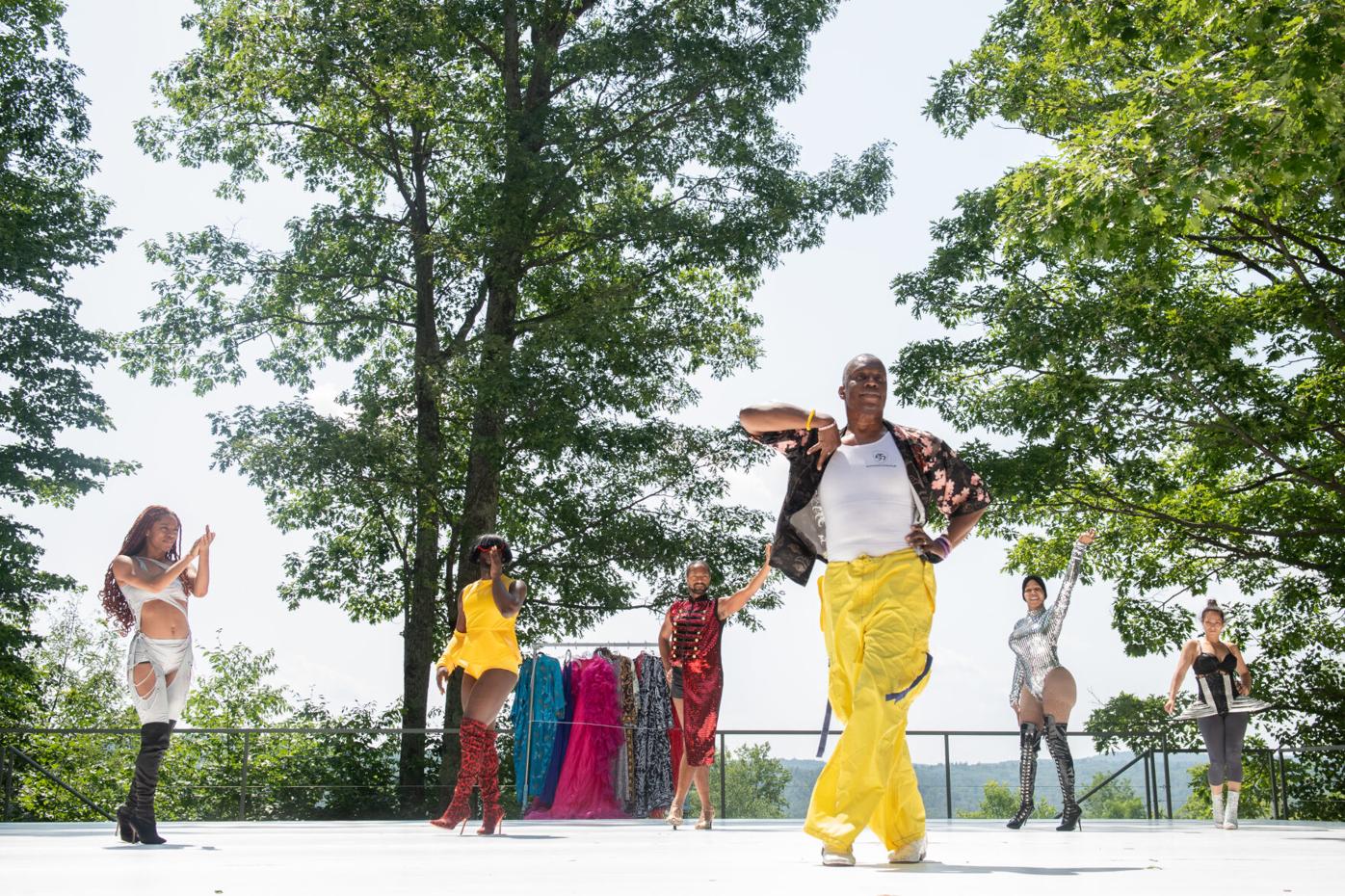 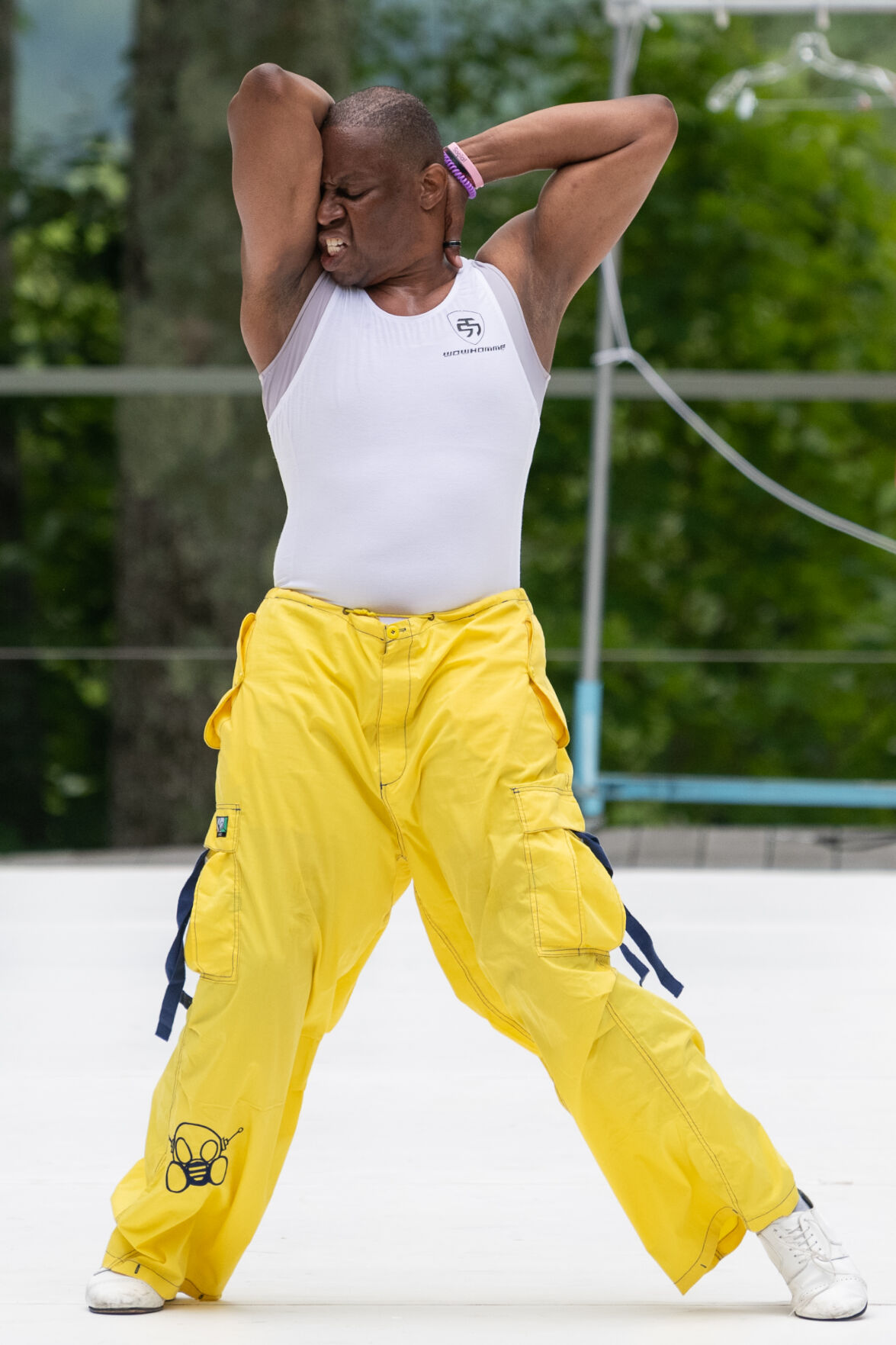 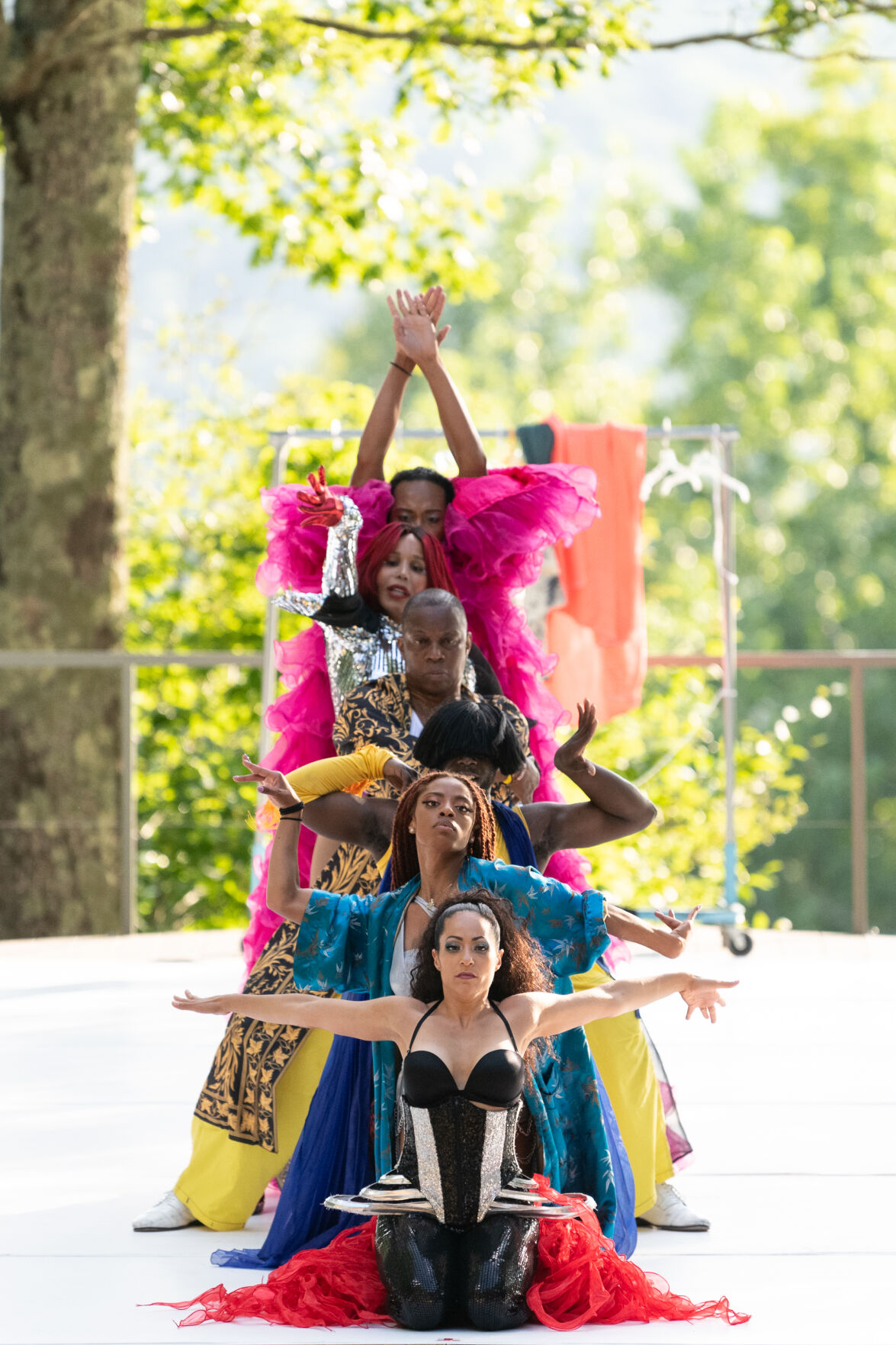 BECKET — If part of the lure of going clubbing is the ways in which one can, in the hallucinatory, anonymous realm of the dance floor, lose oneself, imagine how revelatory it is to go to a club to find one’s true self. (Or to find that true self, truly accepted by others.)

Self-proclaimed “clubhead” Archie Burnett has said that a club is family, the kind “that accepts you for who you are and what you do…the club is like the safe haven, it’s the better side of reality.” The specific clubs Burnett is talking about are the underground House clubs of New York City, as well as their forerunners, the Ball clubs that began emerging in the 1970s, and that Burnett discovered in the early 1980s. “Life Encounters,” Burnett’s part memoir/part lecture-demonstration show premiering this week at Jacob’s Pillow, traces his pathway from “Soul Train”-addicted child to teen newbie voguer to, in his capacity of one of the founders of the famed House of Ninja, adult “father”hood.

The six dancers — fabulous, unique — who accompany Burnett also point to Burnett’s continuing story, these days highlighted by his mentorship of the younger generations. Now 62, Burnett is respectfully referred to as a grandfather of that house named after its “mother” — and Burnett’s great friend — the renowned voguer Willi Ninja, who died at age 45, another casualty of AIDS, another big loss for the dance world. The stage name was a nod to Ninja’s fascination of martial arts, which was reflected in the slicing, whiplash precision with which he wielded his gloriously long arms.

When a young dancer in the Ball circuit, Burnett developed a movement style distinctly suited to his own, tall, muscular yet supple, body; throughout “Life Encounters,” Burnett serves small, but juicy, portions of this tailor-made dancing. The unassuming yellow track pants and white tank top he sports throughout the dance may belie his status as a true Legend in the House and Ballroom worlds, but when he starts moving, he glows with the decades of virtuosic authority.

In brief bursts he frames his face and torso in a flurry of crisply-executed arm positions, while his feet whisper him sideways, forward, backward; occasionally he slides into a split, playfully reminding us that this grandfather can still get down, in every sense of the phrase.

Burnett’s short star turns also serve in a practical sense, as a bridge between the various portions of the performance, which, in addition to mapping his own trajectory, also serve as a basic primer of popular Ball and House forms, especially Vogue and Waacking. There is an overall, welcome looseness to the performance but occasionally the piece meanders, despite its brevity (it’s about 40 minutes long). Given that “Life Encounters” is such a personal work, I wished Burnett spoke live rather than in the pre-recorded voice-over narrative woven throughout the performance. I also suspect that this is one show that will greatly benefit from being in an indoor theater, where lighting and wings can offer both a more fluid (and magical) sense of scene-shifting, as well as creating the sense of the dark, underground world of the clubs.

Yet there is much that does bring us to this world. Steve “DJ Chip Chop” Gonzalez’s consistently funky score lends an infectious groove to the proceedings, while the dance sections conjure a variety of milieus and attitudes—wild party, cool runway, spaced-out trip. The frequent costume changes celebrate that elaborate, fun, flamboyant aspect of Ball culture: thigh-high boots; a hot-pink, floor-length, ruffled robe; a form-hugging, yellow, knee-length onesie; shimmery, multi-hued pants; cascading capes; wigs of various colors and textures.

The finale is one of those great sequences in which each dancer gets their moment in the spotlight — in this iteration, in the sun — and brings us full circle to the “come as you are” spirit of House circles. There’s Princess Lockerooo, (Samara Cohen, those fantastic costumes are all courtesy of her), swirling her arms and sliding into splits; the great b-woman Ephrat “Bounce” Asherie, whirligigging on her back or tying up her legs in pretzels; Deandre “Yummy” Brown, like a resplendent fish diving to the floor/sea and up; Abdiel (Jacobsen) weaving their legs with deft delicacy, salsa-like, their purple chiffon cape/tunic fluttering out like wings; Sinia Reid kicking her kinky booted-legs with deadpan deadliness while her magenta-wigged head gyrates round and round; Maya Llanos shimmy-stuttering her legs in a wide parallel while her torso curves in contrasting undulations.

Nipping at the heels of this generation are those of the next — many recently drawn to the mesmerizing world of Waacking via TikTok videos — are now hungry to learn more about the history and the people who were there. For these newbies, there’s always a place at this table.

BECKET — Dancers are a touchy bunch.

BECKET — By celebrating the golden anniversary of Ballet Hispánico during this week’s performances at Jacob’s Pillow, we are, technically spea…

BECKET — “Like Water,” one of three dances presented this week at Jacob’s Pillow by the 45-year-old Dallas Black Dance Theatre, was a birthday…