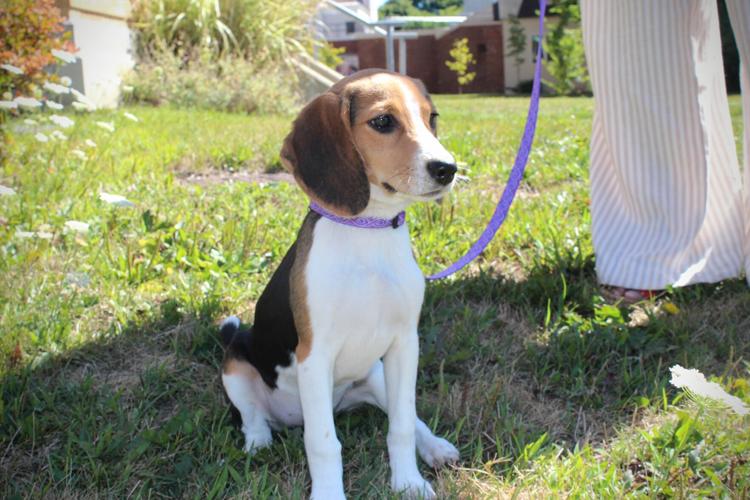 Jolene, also known as JoJo, was named after two songs: "Jolene" by Dolly Parton, and "Get Back" by The Beatles. 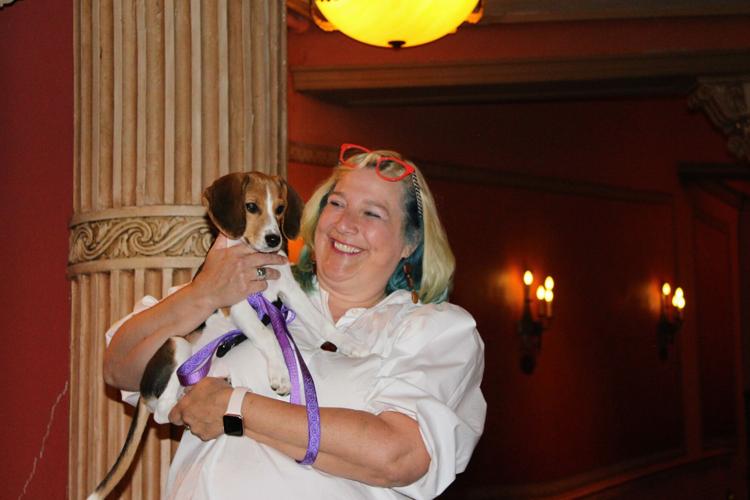 Jolene, or JoJo, a 4-month-old beagle, is held by Tricia DeHart of Berkshire Theatre Group. JoJo was one of the 4,000 beagles to be rescued from Envigo, the mass breeding facility in Virginia that had several animal welfare violations. 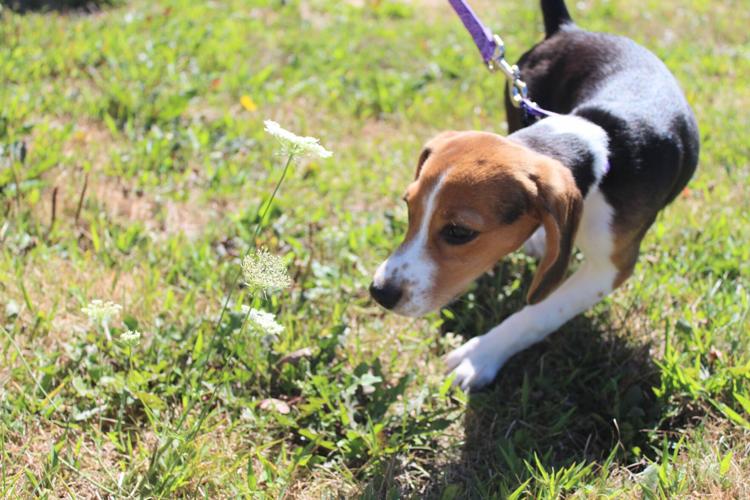 JoJo smells a flower. The Humane Society of the United States says many of the beagles in Virginia were kept in cages for most of their lives and had never seen or stood on real grass. 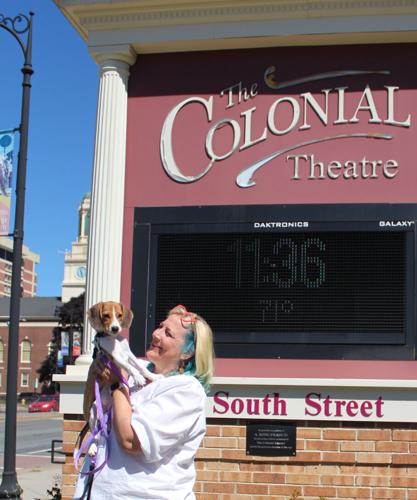 Tricia DeHart holds JoJo outside of the Colonial Theatre in Pittsfield. JoJo spends her mornings hanging out in the offices and greeting everyone who stops by.

PITTSFIELD — On a recent morning at The Colonial Theater, Jolene makes her way through the lobby and heads toward the theater doors. She stops for a moment to greet a coworker, admiring the scent of her shea butter body lotion, and then continues on her way.

Once through the doors, she’s excited to see crew members on stage making lighting adjustments for the next show. Curious about all the activity, she decides to take a closer look — bounding down the stairs, tail wagging and ears flopping with each leap.

JoJo, as she is also known, is a 4-month-old beagle and the newest member of the Berkshire Theatre Group family. She was rescued July 30 from a shelter by Tricia DeHart, the donor relations associate for BTG. JoJo is one of the nearly 4,000 beagles rescued from Envigo, a facility owned by Inotiv in Cumberland, Va., which bred and sold animals for lab experiments in biotechnical and pharmaceutical industries.

According to the ASPCA, breeding and selling dogs for research is a legal activity with a license from the U.S. Department of Agriculture and is regulated under the Animal Welfare Act. However, during an inspection in 2021, the Virginia facility was found to have several violations of federal regulations.

On May 18 this year, a U.S.D.A. inspector general and other law enforcement agencies executed a search warrant of the facility and seized 145 dogs that veterinarians determined “needed immediate care to alleviate life-threatening illnesses or injuries,” according to the case file.

The violations left animals underfed, sick, neglected and overheated. Dogs were living in “a buildup of inches of feces and food waste, court documents show.” The Humane Society blog says that government inspectors found that dogs in the facility were being euthanized instead of receiving veterinary treatment for treatable conditions. "Nursing mother beagles were denied food; the food that they did receive contained maggots, mold and feces,” the society said.

ONE OF THE LUCKY

DeHart says JoJo is “one of the lucky ones.” DeHart has a background in animal welfare and had been following the story about the Envigo facility. The Department of Justice filed a lawsuit against the Virginia facility in response to the violations of the Animal Welfare Act.

In the consent decree entered on July 15, the facility was prohibited from further operations and was ordered to transfer the remaining 4,000 dogs to shelters within 60 days. The Humane Society of the United States put out a call for help and over 120 shelters and rescue organizations responded. One of those shelters was the Dakin Humane Society in Springfield, where DeHart used to work.

If you're interested in adopting, fostering or donating to a local shelter or rescue in your area that is assisting with the placement of the dogs, contact the organizations found here: humanesociety.org/4000beagles/beagle-partners

DeHart said she had been wanting to get a puppy for a while, even before things escalated with Envigo. She says she had been checking in with the Berkshire Humane Society daily in search of a hound. She had also reached out to the Dakin group.

“I said, ‘if you get a puppy, let me know,’" DeHart said in a recent interview at The Colonial Theater, where a leashed JoJo was playing nearby.

Dakin was scheduled to get 10 adult dogs, but a last-minute change meant it would instead receive 20 puppies. When she got the call from the shelter about a beagle puppy, she happily said yes, and brought JoJo home at the end of July.

The Berkshire Humane Society is honoring a late veterinarian, renaming its shelter in his honor

As of Labor Day, all of the nearly 4,000 beagles were officially removed from the Virginia facility and on their way to shelters or new homes.

DeHart describes JoJo as an energetic and super-sweet dog. When it came to choosing her name, in true theater fashion, DeHart said she wanted to pick a name she could sing to her dog. She and her boyfriend went through several options, but chose the name Jolene after Dolly Parton’s “Jolene” and the nickname, JoJo, after The Beatles’ “Get Back.”

As a close runner up, DeHart also considered naming her after Gloria Gaynor, who sings “I will survive.”

Because JoJo is so young, DeHart hopes any trauma the dog experienced won’t be long lasting. She says there are signs that indicate what JoJo went through.

Since her birth in early May, JoJo lived in Virginia without ever standing on real grass. Many of the beagles are the result of selective breeding, which means dogs are bred with the intention to achieve a desired personality trait, or to reduce the chances of diseases caused by genetics.

In JoJo’s case, her docile and social personality was intentionally selected by the facility so that she wouldn’t put up a fight against testing and wouldn’t be afraid of the facility staff members, DeHart said.

“They do terrible things to them and they’ll just be okay with it,” she said of the process. DeHart said she has a friend who oversaw the microchipping of beagles in the shelter; the dogs never once cried during the procedure.

JoJo has an identification number tattooed in light blue ink on the inside of her left ear, which DeHart says was done at Envigo without anesthetics. Many of the beagles also had their dew claws removed while at Envigo, which PetMD says should only be done in rare, life-threatening circumstances and otherwise should be left alone.

In her new life in the Berkshires, JoJo comes to work with DeHart almost every morning, spending her time snoozing in her pink fuzzy bed or greeting anyone who comes by their office. She returns home around lunchtime. She is a quiet guest and DeHart says she hasn’t barked much.

What’s it like to bring your best friend to work?

“It’s been fantastic,” DeHart says. “We have a good setup. We have a crate but we don’t need it. JoJo was already crate trained, and was fine right away, but we just use a gate.”

Amy Moorby, communications manager for BTG, says she loves having JoJo at the theater, whether she’s coming over to say hello or just hanging out with the staff all day. “[She] has really become a mascot at BTG.”

If you're interested in adopting, fostering or donating to a local shelter or rescue in your area that is assisting with the placement of the dogs, contact the organizations found here: humanesociety.org/4000beagles/beagle-partners