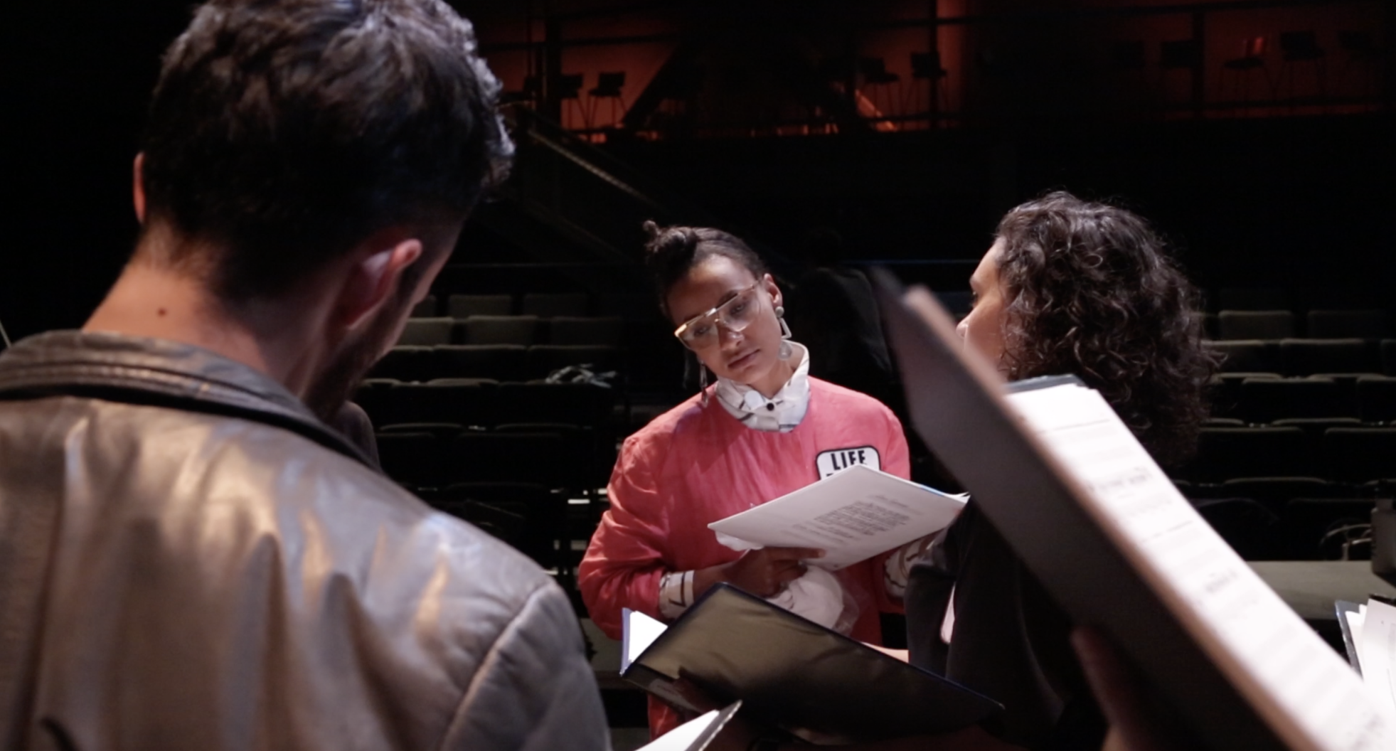 Esperanza Spalding rehearses "Iphigenia" with members of the opera, which most recently was in residency at Mass MoCA. 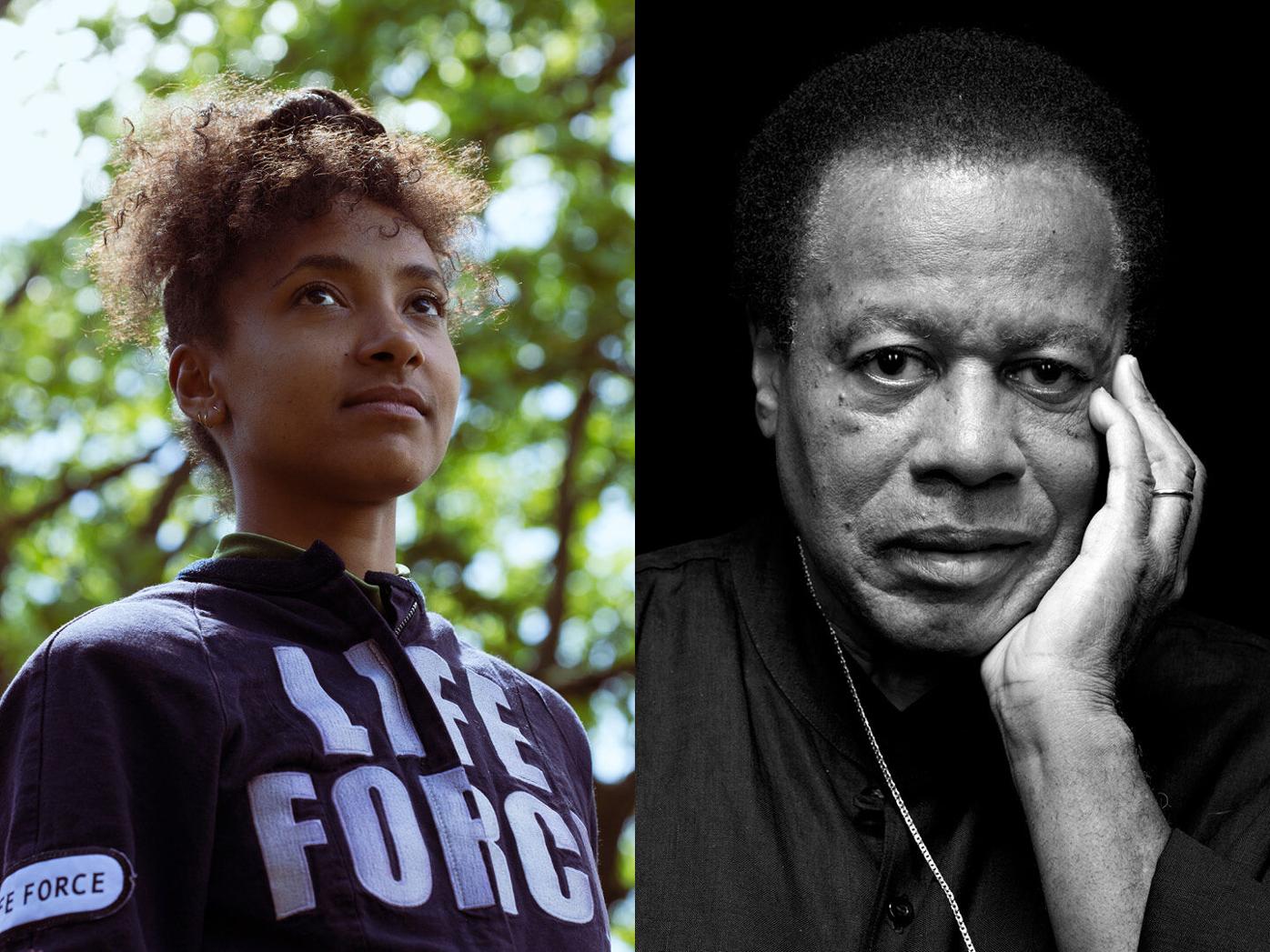 Acclaimed bassist, composer and singer Esperanza Spaulding and legendary jazz saxophonist and composer Wayne Shorter have collaborated on "Iphigenia" which will run in limited previews on Friday and Saturday at Mass MoCA. 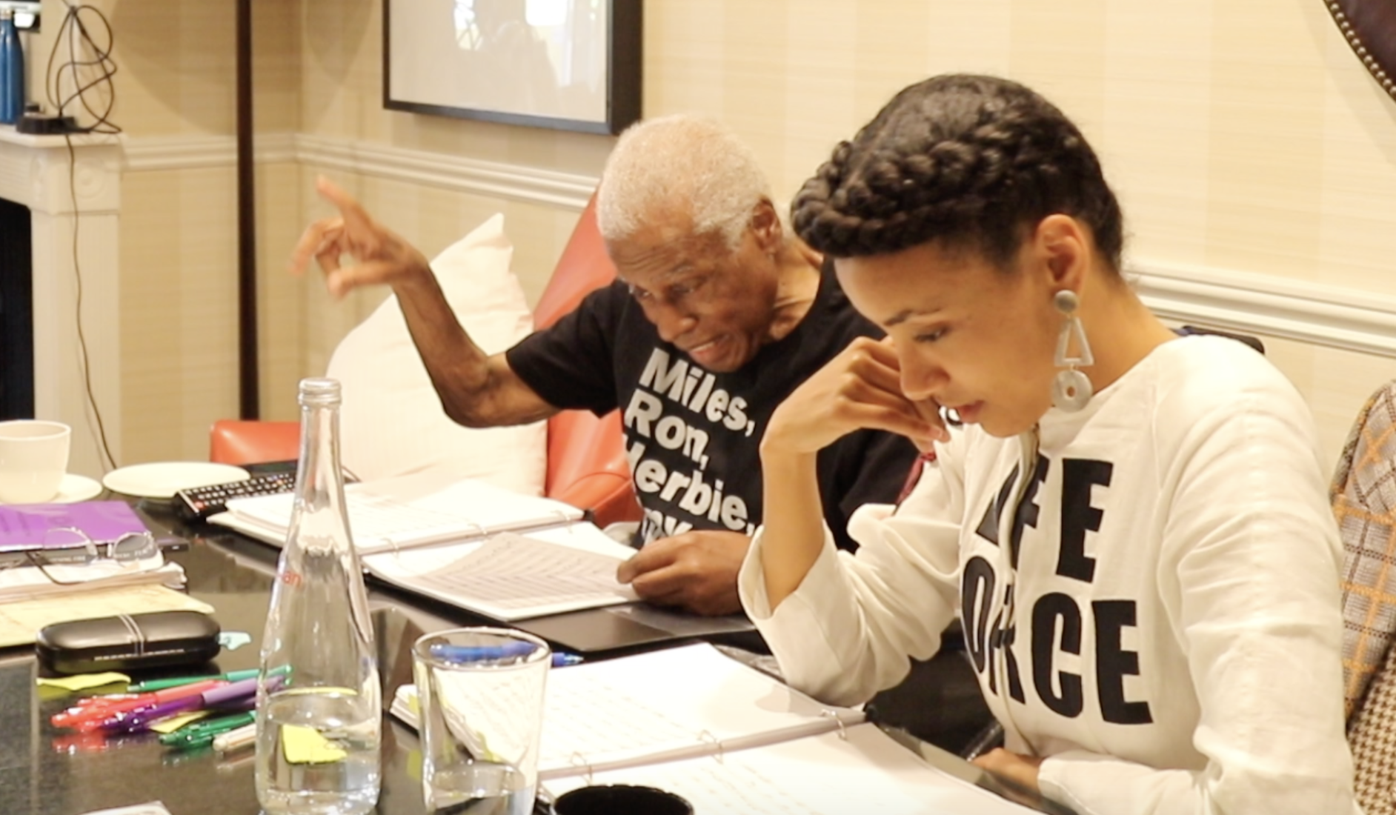 Wayne Shorter and Esperanza Spalding during a rehearsal of "Iphigenia." 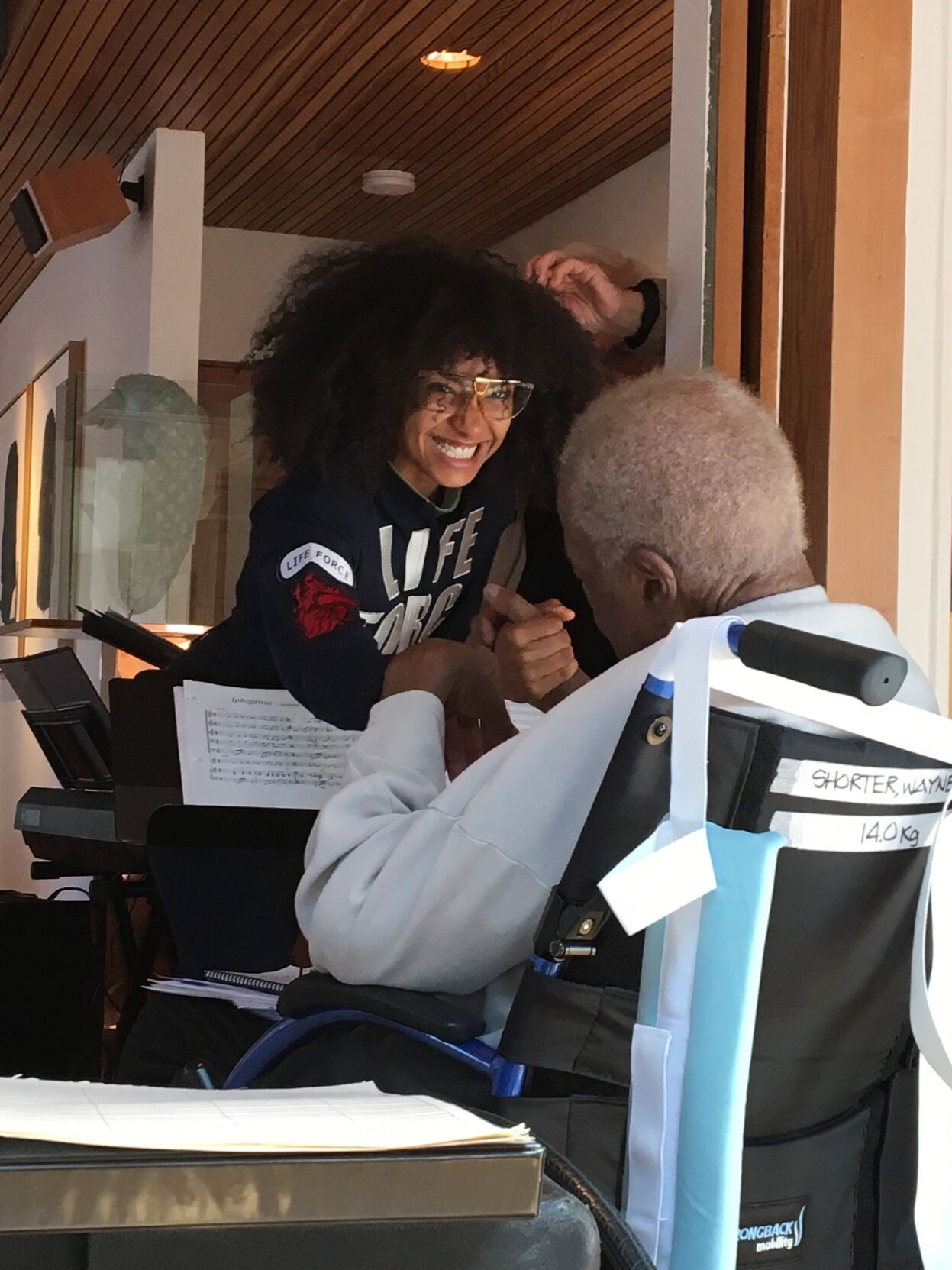 “I got it into my head I could help bring together a group of people, funding and support he needed to make [this] happen," Esperanza Spalding said of her collaboration with Wayne Shorter on "Iphigenia," an opera eight years in the making. 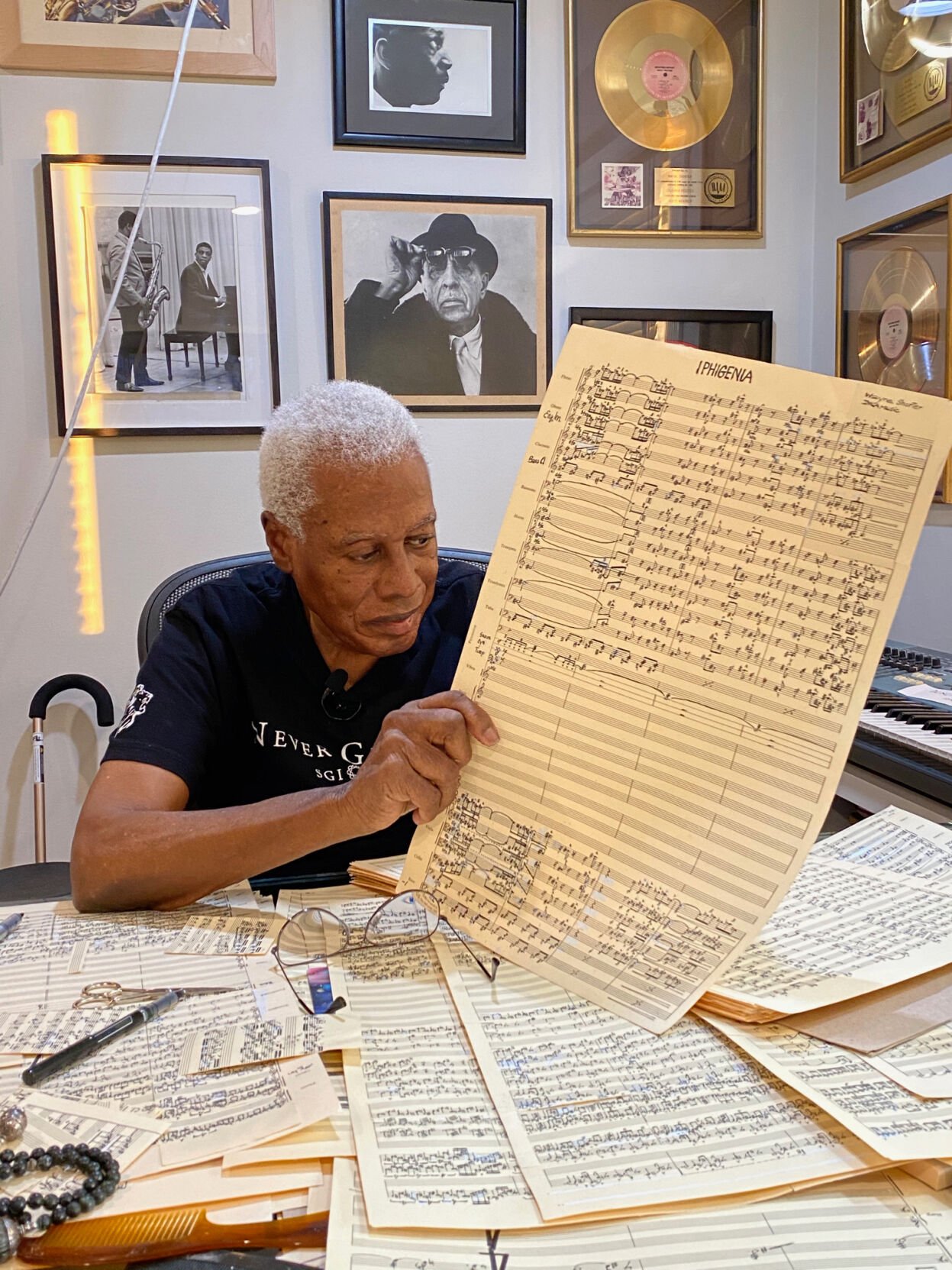 Wayne Shorter works on the score of "Iphigenia."

Esperanza Spalding rehearses "Iphigenia" with members of the opera, which most recently was in residency at Mass MoCA.

Acclaimed bassist, composer and singer Esperanza Spaulding and legendary jazz saxophonist and composer Wayne Shorter have collaborated on "Iphigenia" which will run in limited previews on Friday and Saturday at Mass MoCA.

Tickets: Sold out. To be added to the waitlist, email boxoffice@massmoca.org.

“I heard him say he’d always wanted to write an opera [since] he was a teenager,” Spalding said, speaking by phone while grabbing a bite of breakfast before rehearsal at Mass MoCA.

She recalled first collaborating with Shorter in 2013 on his 25-minute piece “Gaia.”

“I got it into my head I could help bring together a group of people, funding and support he needed to make [this] happen," she said of the collaboration eight years in the making.

Forming a company, Real Magic, to develop the project with executive creative producer Jeff Tang, she said, that along the way she "got enlisted as librettist [and] one of the characters in the opera."

Following the two sold-out previews in North Adams, the 90-minute opera debuts at ArtsEmerson in Boston before performances at the John F. Kennedy Center for the Performing Arts in Washington, D.C., in December, before moving on to California for shows in February in Berkeley and at The Broad Stage in Los Angeles.

Prior to "Iphigenia," Spalding had never written a libretto before.

“At first you think, if you make an hour-and-a-half album with words it’s the same,” she explained. “But this was particularly tricky, it’s been an eviscerating, humbling and expanding process.”

AN INTERVENTION OF SORTS

Over the centuries, Iphigenia’s story has been widely adapted for stage, opera and film.

As Spalding describes it, “the goddess Artemis is offended and strands the Greek army during a very high-stakes war. The only way she can be appeased is if King Agamemnon sacrifices his daughter Iphigenia to make amends.”

“Our Iphigenia has at its core a sense of autonomy – in this adventure of life, you have freedom of choice. All cards are on the table and Iphigenia gets to choose, free of everything. Through her example, we can learn how to take a creative approach to everything, using the power of spontaneous engagement. The overarching sentiment is one of humanistic love, of wanting to re-awaken the dreams of youth free of the pressures of adulthood.”

But Spalding and Shorter did not want to simply put another adaption of the Greek myth into the world. Instead, the pair sees their work as "an intervention into myth-making, music and opera as we know it. "

“I didn’t want to claim the singular voice of this woman who’s been silent throughout history, so I invited three women poets from different areas of the world — Joy Harjo, Safiya Sinclair and Ganavya Doraiswamy — to write her testimony.”

Blending classical and jazz forms, Shorter’s music and ideas bring a unique perspective to the character of Iphigenia, Spalding said. The opera, she said, “is our interpretation of the myth of her life.”

“The myth is mysterious, at the heart is a misinterpretation and reducing of the solution being asked for.”

“There are 44 people here right now, said Sue Killam, the museum's director of performing arts. “This is definitely on the bigger side of things. Kentridge was 75. Sometimes, we have just one person in residency.

“Spalding is an artist we’ve always wanted to work with. It was a great opportunity to help her explore a different side of her creativity and see their project to the end.”

A dozen performing arts staff work directly on residencies, implementing lighting and audio design and assisting with company management, artist and technical services, with many more staff in support.

Mass MoCA has offered artist residencies since its 1999 opening, at no cost to artists.

“We don’t charge them, [they] are here as a gift,” Killam said. “We’re hosting them, helping them find their way. We curate our residency program, looking for a balance of genre, ideas and diversity.”

Residencies are funded by grants and public showings at their conclusion.

“We’re blessed with space and time, a relaxing pace and very creative environment. And we always have housing. Combining that felt like a great way [to] contribute to the field. It’s on point with our mission to help further artists.”

During shutdown, Mass MoCA doubled its residencies “to keep everyone moving forward in their careers and ideas,” Killam said. “They felt supported, like there was a future for everyone. And it kept our staff employed.”

“The Mellon Foundation was really generous in [helping] keep artists creating in this time of no performance,” she noted.

It took "so many people" to keep "Iphigenia" moving, Spalding said.

With the finish line in sight, she “feels like anything is possible with sustained intention, trust, effort, giving to a thing larger than oneself.”

“Wayne’s music is being honored and that’s most important," Spalding said. "Once we deliver it to the world, other people can run with [it] and see what they find.”

While Shorter can’t attend the preview, he’s been actively involved in the process.