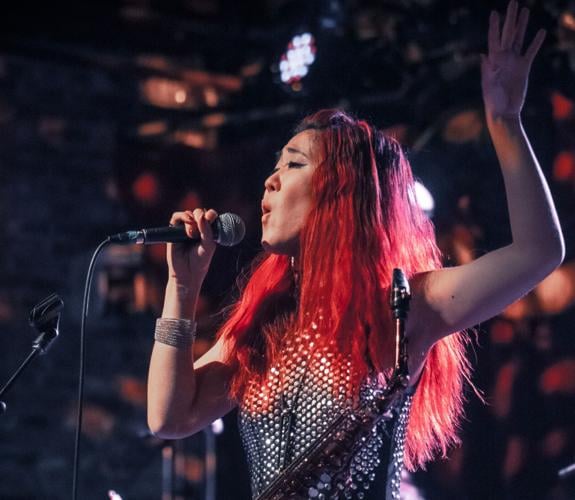 Saxophonist Grace Kelly, a Berkshire native, will perform with her quartet on Sunday at the Lee Meeting House. 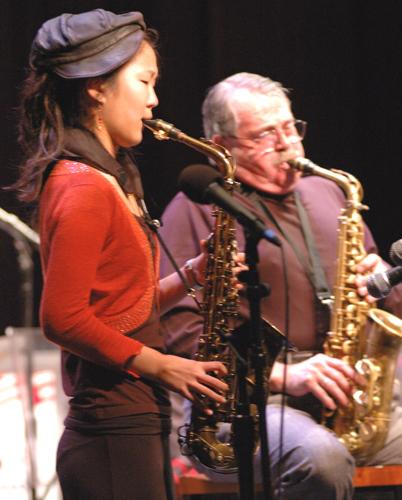 Grace Kelly, at age 14, plays with Phil Woods at the 2006 Pittsfield CityJazz Festival, after receiving the jazz musician's legendary cap.

LEE — Half her lifetime ago, in 2006, a young alto saxophone player named Grace Kelly stood beside veteran saxophonist Phil Woods on the Colonial Theatre stage, as part of the Pittsfield CityJazz Festival. At just 14, with several albums already under her belt, Kelly had made her mark as a jazz prodigy.

The two saxophonists played the jazz favorite “I’ll Remember April,” taking turns to solo. At the end of the number, Woods removed the signature leather cap he always wore and placed it on Kelly’s head — a spontaneous gesture of admiration that entered into jazz lore.

Five years later, Kelly headlined the festival, with Woods as her guest. She recorded the CD “Man With The Hat” in honor of her mentor. Another five years, and she led his band in a tribute to her late friend, a year after his 2015 passing.

On Sunday, Aug. 28, Kelly returns to the Berkshires to the Lee Meeting House to perform her latest album “All That I Need,” completing the first leg of her 28-date “Good To See You Again” coat-to-coast U.S. tour, which includes stops at renowned Northeastern venues Caffe Lena in Saratoga Springs, N.Y., Infinity Hall in Hartford, Conn., and New York City’s Le Poisson Rouge.

This is Kelly’s 14th album as band leader, with many more as a guest artist. As a teenager, she made a record each year, beginning at age 12 — “songs I was learning, a lot of jazz standards, also my own songs,” she said by phone while traveling to rehearsal in New York City.

“I love recording,” she explained. “Live performance happens so quickly, you play something and it’s done. With recording you [can] really think about it, feel the nuances, details that really stand out. In live shows it might just get lost in the sound.”

Receiving Woods’ hat had a profound impact on her career. “The moment was recorded by my father, and Phil gave us his blessing to put it up on YouTube. It started circulating in the jazz community, getting tens of thousands [of views] and 10 years later over a 100,000 views.”

Suddenly jazz musicians and people she’d never met were saying, I’ve heard of you, I saw your clip, she recalled. “It was huge for me and my career, for Phil to take me under his wing. I’ve been blessed to have incredible alto sax mentors and heroes, [such as] Lee Konitz, Frank Morgan. I would not be the musician I am today without having learned from them.”

Now age 30, Kelly has matured into a confident, dynamic performer, songwriter and recording artist. Besides leading her own band, she has performed with notable artists from Wynton Marsalis to Esperanza Spalding, and international orchestras including Boston Pops and Lincoln Center Jazz Orchestra. In recent years she has become more active writing and performing songs for Film and TV, including the Amazon series “Bosch,” and has dazzled fans with her music video stylings.

A highlight of her career was playing on “The Late Show with Stephen Colbert” for six months, as part of Jon Batiste’s “Stay Human” band.

“Jon is a dear friend, I’ve been a fan of his for over ten years, back when he was playing small clubs,” she said.

She knew his former alto sax player Eddie Barbash from teenage jazz camp, and had seen Jon around on the jazz scene.

When Barbash invited her to a party where Batiste was playing, “we all started jamming and had so much fun,” she recalled.

They started doing jam sessions after his stage shows, and she guested with him at Blue Note and Newport Jazz Festival. Six months into his Late Show gig, “he called me and said, how many saxophones do you play? Do you play clarinet? What are you doing on Monday?” A two-week booking turned into half a year.

“I learned so much from Jon,” she said, “he is such an incredible front man and musical director, so talented.”

“We recorded my song called “Lemons Make Lemonade” which I wrote with Jon in mind,” she added. “It was a thrill to have him guest on my project.”

Currently she performs with Ross Pederson, her drummer for the past decade; pianist and Berklee College of Music classmate Devon Yesberger; and bass player James Dale.

Before the pandemic, she toured extensively. “Playing at the Hollywood Bowl was incredible, in front of all those people, that was a real treat. Scullers in Boston was definitely a home for me,” she recalled.

International travel has included several visits to her ancestral home of South Korea. “We’ve toured all over Germany and Italy, France, Uruguay, even Madagascar which was super cool.” she said.

“After my first album release party when I was 12, I got a call from a music producer in Norway. That was my first time outside the country, I was 13 years old in 8th grade. I really got a taste early on that this music thing can literally bring me around the globe. I didn’t know what a career in music would look like, I just knew I loved it.”

In 2006, legendary Boston jazz impresario Fred Taylor of Scullers club renown brought Kelly, then 14, to Tanglewood Jazz Festival to perform at a media party — she played in the Jazz Café the following year — where she talked with Pittsfield CityJazz Festival founder Ed Bride. Six weeks later, she was performing there with Phil Woods.

“It was like passing the torch,” Bride recalled, “she wore that cap for years, and would always tell the story.”

“She’s got quite a history with us and the Berkshires,” Bride added, “so it’ll be great to have her back after all this time. She’s 30 years old, too old to be a child prodigy, now she’s a young lioness.”

Since Lee Congregational Church was repurposed as a performance venue, the town has hosted Berkshire Gateway Jazz Weekend each spring, Bride said. “We also do one-off events there, it’s a great venue acoustically for small ensembles.” And the pews are padded, he assured.

Bride sees jazz on the rise in the Berkshires. “It’s become more part of the landscape, you can see jazz every weekend at Gateways Inn in Lenox, every Monday at Mission in Pittsfield. It’s a growing scene, and it’s important to present younger artists like Grace Kelly to attract younger audiences.”

Her memorable monicker is no showbiz affectation. Born Grace Chung, when she was little her mother remarried, to Robert Kelly.

“It’s a beautiful story of how this name was given to me by my stepfather, who adopted me when I was 8,” she said. “I’ve loved Grace Kelly since I was a little girl, she was the epitome of so much elegance. I used to watch her old movies and always wanted to be a princess.”

Her parents, who now live in Lenox, are actively involved in supporting her career. “I come from a family of entrepreneurs, so we work together well,” Kelly said.

Raised in a Brookline home filled with great jazz recordings, classic movies and art, her first introduction to the sax was Stan Getz playing “The Girl From Ipanema.”

“My parents would wear out those recordings, they would play it all the time,” Kelly said. “To this day it’s one of my favorite sounds on the saxophone.”

After piano lessons and, briefly, clarinet, her first saxophone teacher encouraged her to improvise. “He said, just play whatever you want. As a 10 year old, that’s all I wanted to do. I loved to write my own songs, to make things up, and that’s what jazz is about.”

“I thought, this is my calling, and I wanted to play all the time. I practiced till midnight, my parents had to tell me to go to bed.”

Her new album — her first self-produced — was recorded over the last few months. It all came together so quickly, she said.

“It’s a pretty diverse range of songs. The initial inspiration [was], what does the feeling of courage sound and mean?”

She asked fans and friends to send her poems and writings of favorite female authors.

“I wanted to find inspiration from the female voice, strong women. One track was inspired by Maya Angelou’s poem “And Still I Rise,” her spirit really touched me to the core. I let feelings of courage be my compass through the record.”

After several years in New York, Kelly now lives with her partner in Los Angeles.

“New York is awesome, it’s very alive, very busy,” she said. “Now we live in a beautiful zen area, and get to hang out with the birds, do some hikes. It balances out our lives.”