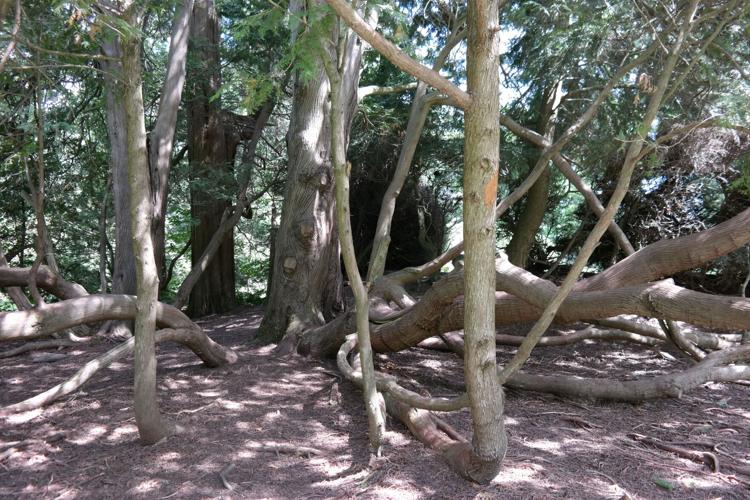 The trees at Tanglewood have been an inspiration for composer John Williams, who will conduct new work this weekend. Beethoven, whose work is featured heavily this season, also drew inspiration from trees and nature.

The trees at Tanglewood have been an inspiration for composer John Williams, who will conduct new work this weekend. Beethoven, whose work is featured heavily this season, also drew inspiration from trees and nature.

The Boston Symphony Orchestra will open its Tanglewood concert Sunday, July 25, with “Jeder Baum spricht” (“every tree speaks”), which composer Iman Habibi describes as “an unsettling rhapsodic reflection on the climate catastrophe.” It is written in “dialogue” with Beethoven’s Fifth and Sixth symphonies, particularly the “Pastoral” Sixth with its evocation of benign nature.

The short piece with a big message follows in a tradition of tree worship that dates back to the Druids and beyond. The German title is taken from a note that Beethoven inscribed in his sketchbook for composition of the “Pastoral.” The often-troubled Beethoven reflects happily on his many walks through the Viennese parks and woods. The full jotting, in translation, is: “Almighty in the forest! I am blessed, happy in the forest! Every tree speaks through you!”

(Note that God speaks to the tree, then the tree speaks to Beethoven.)

In his program notes, the Iranian-Canadian composer explains: “I am hoping that ‘Jeder Baum spricht’ can allow us to listen to these monumental [Beethoven] works with a renewed perspective that is in light of the climate crisis we live in and the havoc we continue to wreak on the nature that inspired these classic masterpieces.”

“Jeder Baum spricht” comes to the right place at the right time. Tanglewood’s majestic trees are an essential part of its mystique. Beyond that, two of this weekend’s concerts highlight the work of composer-conductor John Williams, who is known for his compositions in tribute to trees and his walks around Tanglewood communing with nature in a quest for inspiration.

Friday night’s Pops program, conducted by Keith Lockhart, was all-Williams. Saturday, Williams, himself, conducts the BSO in the premiere of his Violin Concerto No. 2, with Anne-Sophie Mutter as soloist.

Habibi’s piece shares the Sunday program with Beethoven’s Piano Concerto No. 3 (Yefim Bronfman is soloist) and Schumann’s Symphony No 4. It follows last Sunday’s performance of Carlos Simon’s “Fate Now Conquers,” which reinterprets the Beethoven Fifth as a surrender to fate rather than the commonly accepted defiance of it.

Composers, it seems, can’t resist the challenge of old Ludwig.

In “The Golden Bough,” his classic study of mythology, James Frazer writes: “In the religious history of the Aryan race in Europe, the worship of trees has played an important part. Nothing could be more natural. For, at the dawn of history, Europe was covered with immense primaeval forests, in which the scattered clearings must have appeared like islets in an ocean of green.”

John Williams taps into this tradition with “Five Sacred Trees,” a bassoon concerto inspired by five sacred trees of Celtic mythology. The first movement, for example, is titled “Eó Mugna.” In a program note, Williams explains that Eó Mugna is the great oak, “whose roots extend to Connia’s Well in the ‘otherworld’ and [which[ stands guard over what is the source of the River Shannon and the font of all wisdom.”

“Within the tree community,” Williams writes, “there lies more music than anywhere else in the Western world. It is impossible to stand under the high arching boughs of ancient trees and not wonder if the architecture of cathedrals was not born of just such an experience.”

Another Williams piece, “Treesong,” is a violin concerto inspired by a Chinese Dawn Redwood he especially admires during his strolls in the Boston Public Garden.

Habibi, who lives in Toronto, was born in Tehran in 1985 during the Iran-Iraq war. The family emigrated when he was 17, but he happily recalls spending time in a forested region of north Iran. He grew up with revolutionary music, but his father, a chemist, and mother, an English teacher, let him study piano on the sly. He discovered western classical music.

“I loved living with music that I felt belonged exclusively to me, and discovering it one composer at a time,” he writes. He went on to earn a doctorate in composition at the University of Michigan.

Though Beethoven believed in God, he was not affiliated with any religion. “Jeder Baum spricht” was commissioned by the Philadelphia Orchestra for the 250th Beethoven anniversary last year and premiered by the Philadelphians just before the quarantine. The evocation of nature is direct in references to the “Pastoral,” with its “cheerful feelings on arrival in the countryside” and final “cheerful and thankful feelings” after a storm. Habibi believes there is a reference to nature in the Fifth Symphony’s four-note motto. He writes that it was once associated with birdsong, perhaps that of the Yellowhammer.

Not content with his walks along the Humber River near his home, Habib recently joined with a group of fellow musicians, artists and teachers as activists against climate change.

“I’ve really come to the conclusion that we have everything we need to mitigate this problem,” he said in a phone interview. “We have all the science we need, we have all the technology we need, we have an alternative economic model that can take us away from this model that is obsessed with GDP growth. What we don’t have is cultural work, the cultural advocacy.” A “front line” of such advocates, he said, would have “that power to reach into people’s hearts and to communicate a message very deeply into their hearts.”

Or, as he concludes in his program notes: “I am panicking about the climate crisis, but at the same time I want to convey a message of hope, one that can drive our collective will towards immediate impactful change.”

Jeremy Yudkin: Unfamiliar, complicated, unexpected, difficult to grasp ... why we have trouble with new music

The trouble with new music is that it’s unnecessarily complicated, it has too many ideas in succession, there are too many unexpected harmonies, and it’s difficult to grasp the music on just a single hearing. That, at least, was the criticism of Mozart’s music during his lifetime. Other judgements of the young whippersnapper’s work included: "too strongly spiced,” "impenetrable,” "bizarre," "overloaded and overstuffed.”

Rambling About Tanglewood: Beethoven, Beethoven and more Beethoven. Why so much Beethoven?

The Violin Concerto and Seventh Symphony that make up Saturday's program at Tanglewood come from Beethoven’s middle, or “heroic,” period. Listen for overtones of infinity.