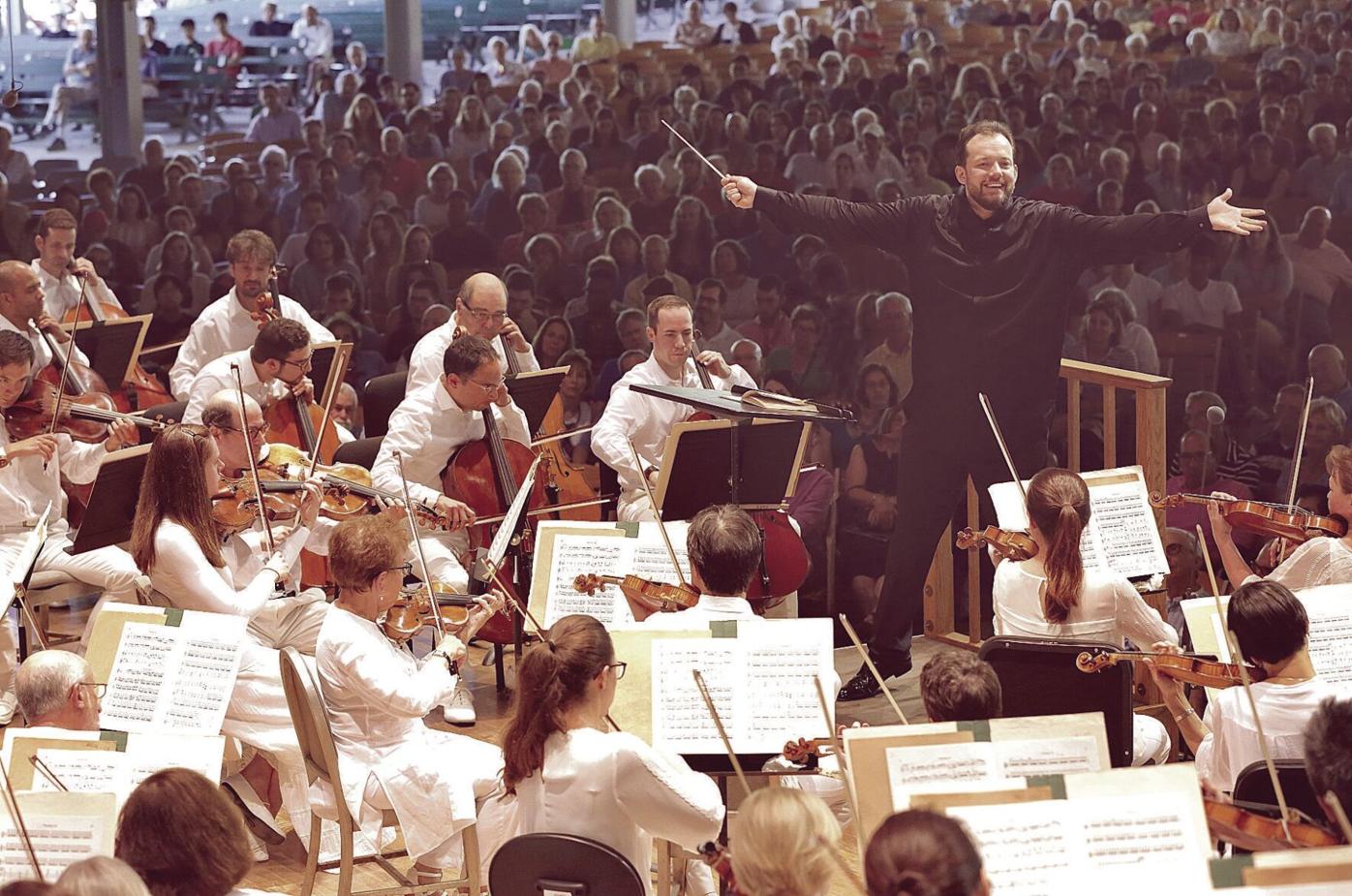 Andris Nelsons conducts at the Shed at Tanglewood. 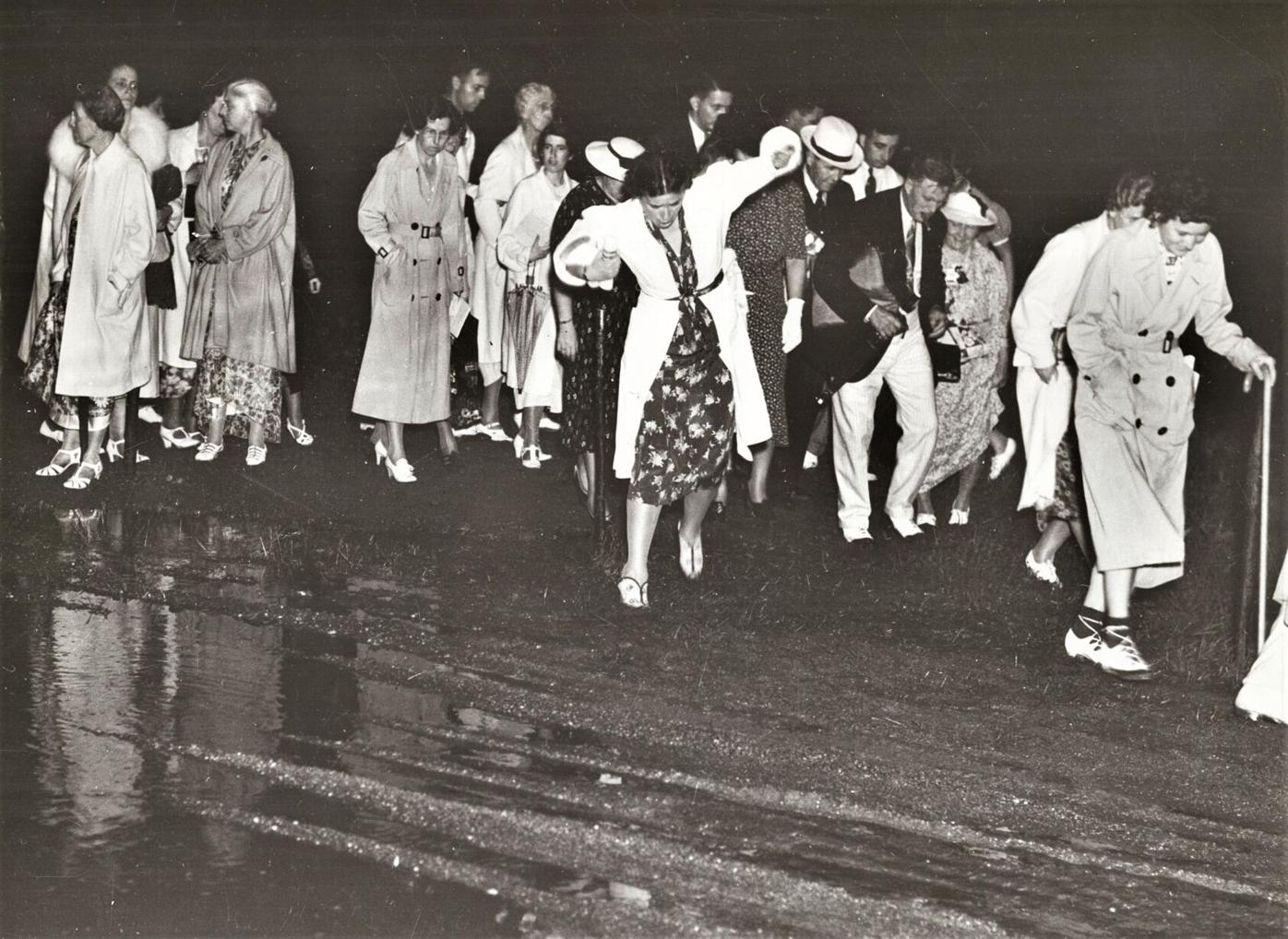 Music lovers leave the Berkshire Festival at Tanglewood on Aug. 12, 1937. It was during the second weekend of the festival that downpours drowned out part of the concert. During an intermission, Miss Gertrude Robinson Smith, one of the festival's founders, made an appeal to raise funds for a permanent structure, and soon thereafter, plans were underway for a "music pavilion." 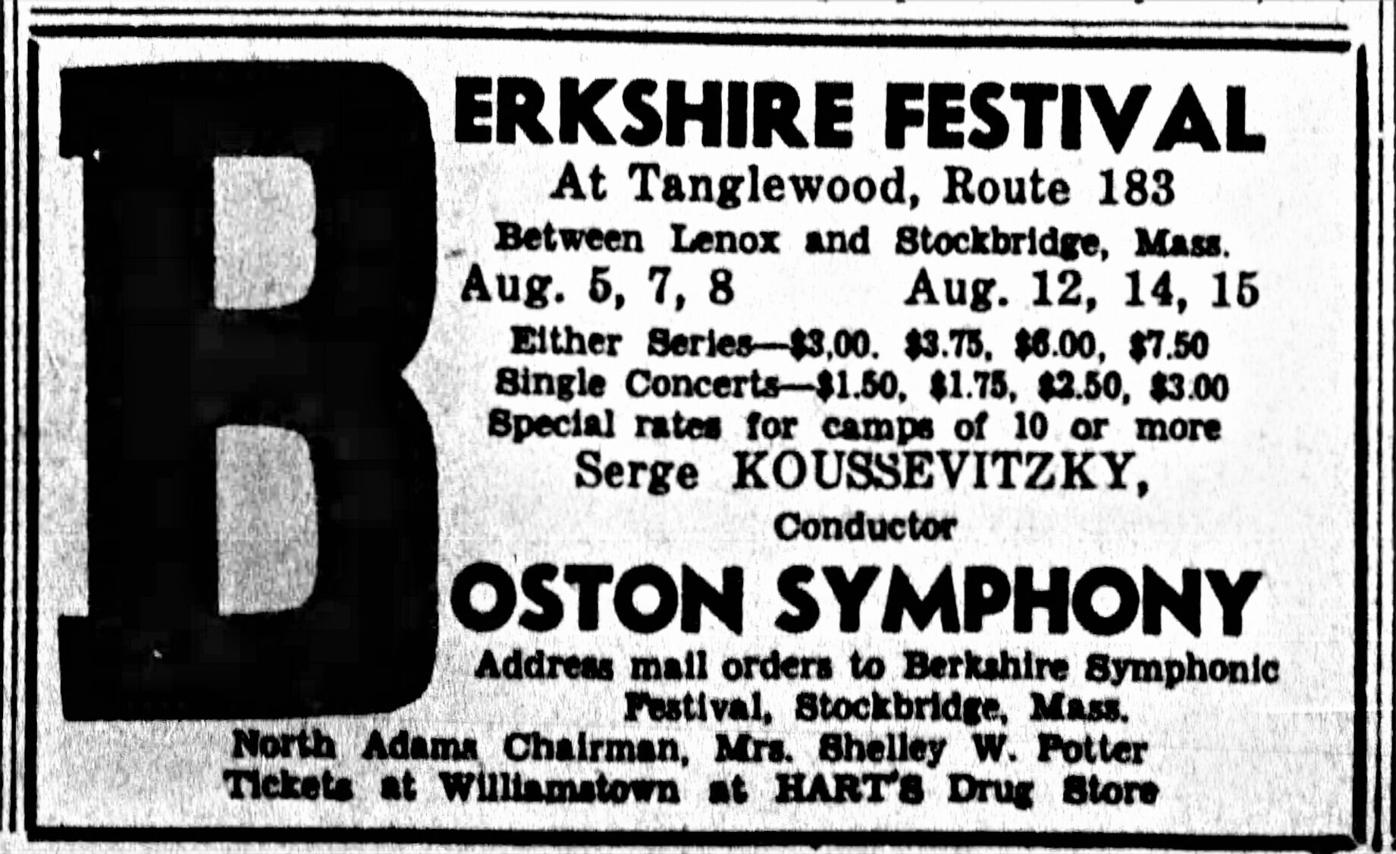 The Berkshire Symphonic Festival started in 1934, with the New York Philharmonic playing the first two seasons.  In 1936, the Boston Symphony Orchestra was invited to take over the festival. The BSO played its first concert in the Berkshires at Holmwood on August 13, 1936. The grounds we now know as Tanglewood became the BSO's summer home in 1937, with the first concert played on the grounds on Aug. 5, 1937.

LENOX — “Thus Fate knocks at the door,” Beethoven said of the four-note da-da-da-DAH motif that opens his Fifth Symphony. You can practically see him shaking a fist at the gods.

Fate knocks at Tanglewood’s door tonight, Saturday, July 10, as the Boston Symphony Orchestra opens its summer season with its first performance before an audience in 16 months. Nothing less than the fortunes of classical music in a digital, pandemic-haunted age hangs in the balance.

Andris Nelsons will be on the podium for an all-Beethoven program featuring the Fifth Symphony and the “Emperor” Piano Concerto (No. 5), with Emanuel Ax as soloist. The BSO lists the program as a contribution to the widely canceled 250th-anniversary celebrations for the composer last year.

More to the point, the Beethoven Fifth is the work with which Koussevitzky and the BSO played the inaugural concert on the Tanglewood grounds in 1937. A grainy film of that epochal event pops up from time to time.

Whatever discomforts a socially distanced audience in the Shed may endure on a summer’s night, they can’t compare to the accommodations offered to the freezing audience at the Fifth’s world premiere, which took place in Vienna three days before Christmas in 1808.

The Fifth was part of a marathon all-Beethoven program that also included the premiere of the “Pastoral” Symphony and Choral Fantasy, plus the Fourth Piano Concerto, movements from the Mass in C, the concert aria “Ah! perfido” and one of Beethoven’s celebrated improvisations at the piano. Adding to the festivity, the pick-up orchestra was badly under-rehearsed and the hall’s heating system, such as it was, broke down.

Can Tanglewood match that?

Maybe with a thunderstorm?

The inaugural concert took place under a tent, after an open-air trial run a year before on a Stockbridge horse farm. About 5,000 attended. In his Tanglewood history, Herbert Kupferberg writes of the debut: “Once again, great crowds began swarming into the Berkshires; in Pittsfield the Eagle reported that ‘public interest outside the Berkshires never has been so aroused over a Berkshire event.’”

History was made again once the music got going. The afternoon turned hot and humid, and Koussevitzky turned to the audience and, in his tortured English, begged, “You will escuse if we remove our kowts.” A roar of approval answered him, and for the first time (but certainly not the last) the gentlemen of the BSO performed in shirtsleeves.

“The incident seemed so newsworthy,” Kupferberg recounts, “that the Eagle ran its account on page one the next day under the headline: ‘Serge Koussevitzky Removes Coat.’”

Well, fate knocked at the door at the first concert of the second weekend. A titanic rainstorm demonstrated the need to perform under a roof. The Shed was ready for occupancy in 1938.

Along with the Beethoven Fifth, the debut program included the “Pastoral” Symphony and “Leonore” Overture No. 3. Tonight, the companion pieces are the “Emperor” and the “Prometheus” overture.

It’s a cliché: There’s no substitute for live music performed before an audience.

Clichés are clichés because they contain a nugget of truth. We couldn’t get along without recordings, but just as the Beethoven Fifth is a programming cliché, it takes on heightened richness and meaning when performed in the communal setting of a concert hall.

The suggestion of religion is not accidental. Listening to recorded music in your living room is like solitary prayer. In a concert hall, it’s more like communal worship. The flow of energy between stage and audience — between pulpit and congregation — draws the listener in.

The difference between live and recorded became markedly clear with the series of videos released last summer by the BSO. They featured BSO members and guest artists who would have appeared, live, at Tanglewood. (A BSO NOW video series followed during the winter; many of those programs are still available for streaming.)

The video performances were doctored to burnished perfection. Different takes were spliced together to create seamless, virtually note-perfect performances impossible in live performance. The unreality was heightened by close-up camera work that homed in on musicians’ fingers, lips, grimaces, twitches, even socks, never lingering anywhere more than a few seconds

The Shed is not an ideal place to hear music. The acoustics are excellent for an open-air pavilion seating 5,000, but the spaces are too large to get the intimate effect you could get in, say, Symphony Hall. But, even with the reduced orchestra the BSO will be using, the music comes directly to you without mechanical intervention.

GIVING IN TO FATE

Beethoven doesn’t get away with that fate-at-the-door thing on tomorrow’s (Sunday, July 11) BSO program under Nelsons. It opens with “Fate Now Conquers,” a five-minute 2020 work by Carlos Simon, an American.

Simon’s piece takes off from a quote from Homer’s “Iliad” that Beethoven entered into his journal in 1815. Homer’s gist is: “but Fate now conquers; I am hers; and yet not she shall share in my renown; that life is left to every noble spirit. ….”

Adapting the fluid harmonic structure of the second movement of Beethoven’s Seventh Symphony, Simon writes, he composed “musical gestures that are representative of the unpredictable ways of fate.” Effects such as jolting stabs, frenzied arpeggios and running passages depict “the uncertainty of life that hovers over us.”

Despite Beethoven’s “aspirations to prevail” over poor health and obstacles to performances, acceptance and joy, Simon believes, in the end, for better and worse, fate won out and dictated his fortunes.

Rambling About Tanglewood: Beethoven, Beethoven and more Beethoven. Why so much Beethoven?

The Violin Concerto and Seventh Symphony that make up Saturday's program at Tanglewood come from Beethoven’s middle, or “heroic,” period. Listen for overtones of infinity.