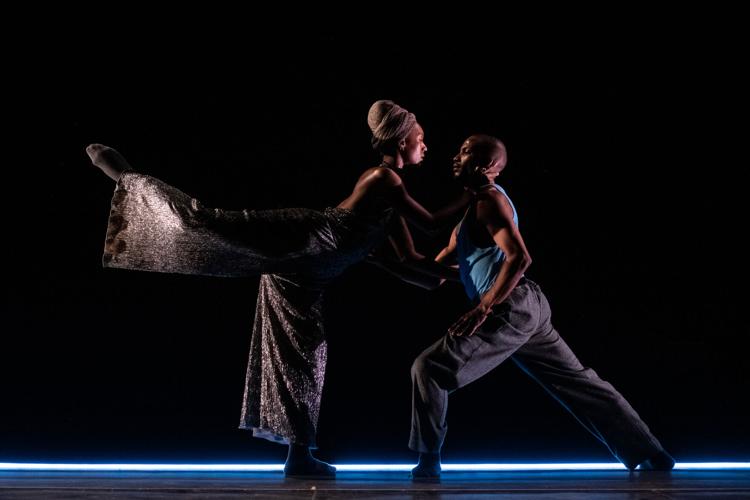 Catherine Kirk and Martell Ruffin in "An Untitled Love." 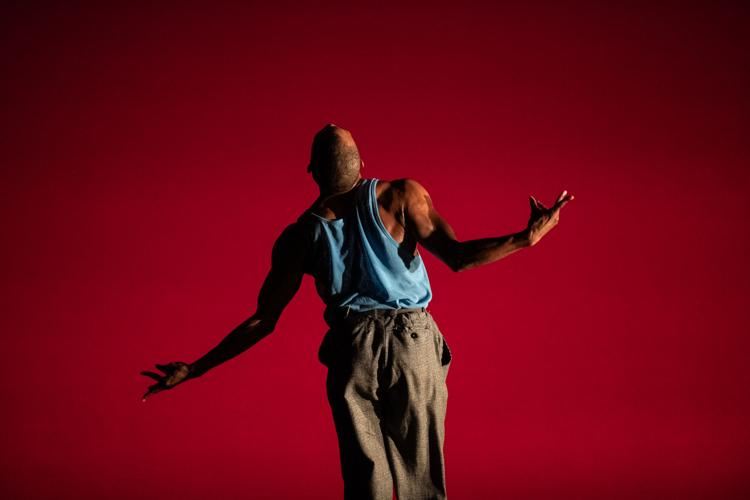 Martell Ruffin in "An Untitled Love" at Jacob's Pillow.

BECKET — One cast member of “An Untitled Love,” the 2021 dance by the postmodern choreographer Kyle Abraham, has called the piece a “Black love sitcom dance.”

Abraham, meanwhile, has called it his love letter to the neo-soul songs of D’Angelo & The Vanguard. I call it a match made in art heaven, a love supreme.

The immersive, hour-long “An Untitled Love” is performed this week at Jacob’s Pillow Dance by Abraham’s own ensemble of very fine dancers (a beautiful dancer himself, he’s also an in-demand choreographer for other contemporary troupes, as well as some ballet companies). Abraham’s choreographic palette is full of sensual, deeply weighted, broadly sweeping phrases that skim the ground with both a palpable quietude and an expansive grandeur. His movement sidles and slides right up into the score of now-sexy, now-sassy, now-romantic, always funky songs from D’Angelo’s catalog. The two were meant to be.

The “sitcom” angle is suggested in the occasional dialogue heard in voice-overs or from the onstage dancers, either at full volume or like the scattered snatches of chatter picked up here and there at a party. Indeed, the series of vignettes, which unfold and overlap seamlessly, conjure now a noisy, rollicking house party, now a cozy gathering for good friends.

The stage set, with a large sofa, end table, and standing lamp, could just as easily be that of a TV show, situated in the characters’ living room — there’s even a potted palm. Dan Scully’s lighting (he’s also the scenic designer) deftly shuttles viewers from scene to scene, or directs our attention, subtly, from one part of the stage to another, like a panning camera. A series of striking, simple drawings and geometric doodles, by Joe Buckingham, are projected onto the backdrop. The handsome costumes, by Abraham and Karen Young, are at first stylishly casual, though some dancers get fancier, date-night duds later in the piece.

Though we often refer to it as an abstract language, dance can be at once potent and poetic, able to convey ideas, emotions, and images beyond words’ grasp. Not only does Abraham not shy away from the body’s ability to express all manner of humanity, he revels in its innate sensuality — an ideal partner to D’Angelo’s lyrics. Abraham’s and his dancers’ movements, whether in formal dance phrases or in colloquial gestures or in eloquent body language, tell us exactly what’s going on; though we don’t necessarily need that dialogue, it’s mostly a charming and often funny (corny, even, but in a good way) device.

So what’s it all about? Nothing, maybe (like a certain very famous actual TV sitcom). Everything, perhaps. Friendship, pleasure, surely. The “Netflix and chill” era is invoked in random, fun-but-brief couplings, but Abraham also channels his parents’ generation — we see bits of swing/social dance, evoking earlier days — and his own childhood memories of the warmth of family/social gatherings. For all of the casual canoodling, however, the timeless search for human connection is evoked in the clear threads of burgeoning love.

Artists in general, and perhaps dancemakers most of all, are often asked (or required) to explain their work. Sometimes, as it happens, their creations are “about” something quite serious; in his work, Abraham frequently tackles the injustices and outright violence inflicted on Black lives. But he’s also spoken about the desire to also make dances that celebrate the joy in Black lives; and so, while there is a searing section in which a young Black man — the excellent Martell Ruffin — vacillates between bone-shaking agitation, nerve-rattling fear, and muscle-gripping frustration, “An Untitled Love” is steeped in joy.

Indeed, a happy fairy-tale ending reigns, with each in the cast of 10, in the end, coupled, possibly even with their soul-mate. The main duet for Tamisha A. Guy and Claude “CJ” Johnson is at once romantic and respectful — Guy swoons into Johnson as he lifts and swoops her around, then supports him as he leans intimately against her. Dymon Samara and Gianna Theodore are still enjoying the first hot rushes of lust, their physical electricity visceral; they cool off individually, Theodore tossing off powerful, hovering handstands and Samara whipping through turns that plunge into long arabesques. Jae Neal and Donovan Reed bicker comfortably and fondly, like one textbook version of an “old couple,” but a poignant duet suggests a deep history of care and trust, a mutual haven. Keerati Jinakunwiphat and Logan Hernandez, frisky like puppies, have the most uncomplicated fun of the whole bunch, frequently running off stage to, presumably, have another roll in the hay.

We get to follow along in the development of the relationship between Catherine Kirk and Ruffin. Alone Kirk is mature and confident, her hands moving up and down her body, creating cascading undulations of movement; she questions Ruffin’s maturity, and indeed, until that sobering section mentioned earlier, his goofiness, though good-natured, is also possibly a sign of unreliability. Thus, though their early back-and-forths are comic, their ultimate commitment to one another is profound.

It’s all, clearly, love. Must we name it, though? Maybe doing so — saying what “it’s about” — unwittingly dulls the experience. In his own title, Abraham is possibly riffing on one of the D’Angelo tracks in this score, “Untitled (How Does It Feel)”. Ah, now there’s an important question. Forget what it’s about. How did it feel to experience that dance? (My answer? Sublime.)

A version of this review also appeared in The Boston Globe. Janine Parker can be reached at parkerzab@gmail.com.

Growing up in New Zealand, Black Grace dance company founder Neil Ieremia looked to his Samoan roots for creative inspiration. New Orleans native Michelle N. Gibson fled the devastation of Hurricane Katrina with a newborn baby and built a new life in Texas. This coming week, they both share their rich cultural heritage through dance at Jacob’s Pillow.