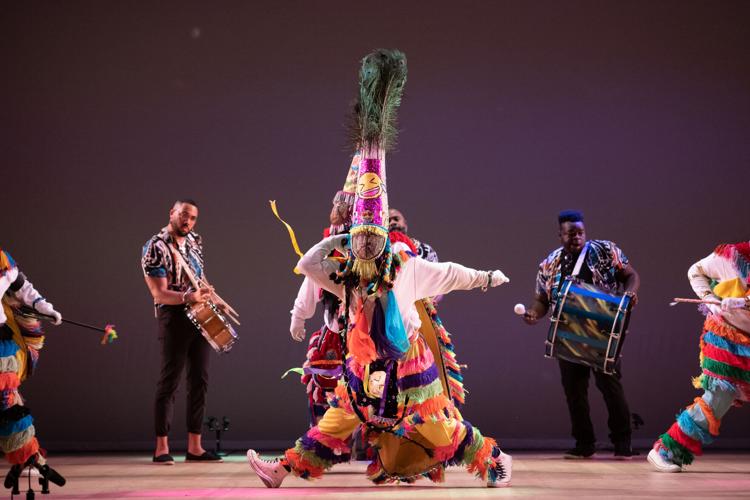 The Warwick Gombey Troupe performs as part of "America(na) To Me" at Jacob's Pillow. 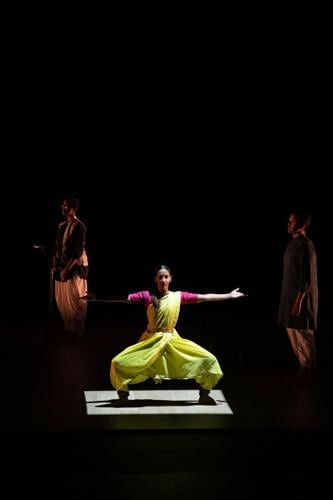 BECKET — Celebrating the reopening, after necessary renovations to its main venue, the Ted Shawn Theatre, Jacob’s Pillow Dance Festival is offering a program, “America(na) to Me,” that is at once playful and provocative. What “Americana” is, and what “America” feels like, is, of course, different, to different people. And as ever, what dance is, what it can be, is also continuously shifting and evolving. The Pillow, 90 years young this year, is itself a very particular example of Americana: The Shawn theater was the first built specifically for dance performance in the United States, and accordingly, the Pillow’s exalted place in this country was sealed in 2003 when it was designated as a National Historic Landmark.

When: Through Sunday, June 26.

Curated by the Pillow’s Melanie George and Ali Rosa-Salas and produced by Katy Dammers, the makeup of the program is in homage to the mixed programs — several separate companies/performers on each bill, and a variety of dance genres — that Pillow founder Shawn presented for decades. Like the vaudeville shows he performed in earlier in his own career, those samplers ensured healthy audiences in the days before dance-only performances held in this country could reliably bring in the crowds. (These days, the Pillow programs usually showcase only one company or performer not only per program, but indeed for a whole slate of six or seven performances.)

The very full buffet George and Rosa-Salas offer us here is, as they said in their onstage speech, a “response” to Shawn’s idea of American identity. Thus, importantly, in addition to genres which Shawn himself presented — Bharatanatyam, flamenco, modern, ballet, albeit danced in today’s cadences — styles he avoided, jazz and tap, are also on the menu. (Thankfully, Pillow directors have hosted these genres for quite a while now, as well as others, such as hip-hop, that hadn’t even been invented during Shawn’s tenure.) Meanwhile, the two large portraits that used to flank the Shawn stage — he posing in traditional Native American attire, his sometime dance partner/sometime wife Ruth St. Denis in costume as an Asian goddess — now live in the archives barn, where the intention is to spark conversation, rather than outright cancellation.

For all the homage due to Shawn, for the legacy he helped build at the Pillow and the crucial contributions he and St. Denis bequeathed to this country’s early modern dance scene, the Pillow is also grappling with the challenging aspects of their legacies, particularly the painful discussion — where does appreciation slip brutishly into appropriation? — of Shawn’s and St. Denis’ practice of performing, with their white bodies, dance genres from other cultures and ethnicities.

In any event, this program is a giant party, really, one that’s kicked off exuberantly by the drummers (Irwin Trott, the group’s founder, and Omar Barnett and Alan Looby) and dancers (Donovan Adams, Kahni Place, Ivan Trott, and Devondae Warner) of the Warwick Gombey Troupe from Bermuda. Gombey is another dance tradition, that, like juba for example, was borne from the movements of enslaved people; in addition to their brightly-hued and fancifully-ruffled costumes, today’s performers continue to wear the full facial masks that were originally worn to hide the dancers’ identities. This group’s connection to the program’s America/Americana theme is through their ancestors, who were among the members of Massachusetts indigenous tribes, including the Mohican, Narragansett, Pequot and Wampanoag, forced off their land.

In her 2014 “Dime Quién Soy,” Nélida Tirado infuses her formidable flamenco dance base with social dance to depict, abstractly, memories of her upbringing in her Puerto Rican family. Early on, Tirado seems paralyzed with anxiety, but with the support of her community — dancers Alondra Valeria Matamoros, Marianna Gatto, Adriana Olivares, Joselito Alcantar, and Christian Ramos — she finds resolve; in a longer sequence for herself and the other women, they alternate between everyday banalities — waiting for the bus or train — and brief forays out of the usual walk of life, their heels briskly rat-a-tat-tatting crisply. When the men return, they’ve all made a remarkably fast costume (and shoe!) change, and moving softly and in sneakers now, trip the light fantastic in a joyous, nostalgic glow.

Light and shadow play a significant role in Jasmine Hearn’s premiere “Trinity: Child, You Lost Water,” a stirring/haunting solo in which Hearn travels, like a ghost, like a memory, entering from the briefly-opened doors at the back of the barn/theater and eventually exiting up an aisle in the audience and out a side door. Mike Faba’s lighting design and the soundscape (by FREWUHN, Jennifer Swanner, and Hearn) are uncannily prescient partners to Hearn’s dynamics — Hearn at times seems to both float just above the floor, even though they are a deeply grounded mover, or to be swimming effortlessly with an invisible current. Sometimes Hearn is purposely out of the light line, and yet their presence is eerily felt.

It’s no slight to say that the odd duck (to say the least) in the program is Alex Tatarsky, whose tour-de-force performance of their 2016 “Americana Psychobabble” is meant to land with a loud, gloppy splat. Tatarsky’s intentionally-outrageous torrent of spoken-word/stream-of-consciousness text is accompanied with a kind of drunkenly-strung together series of movements; they may forget what happened in the morning, and some audience members may wish they could forget what happened, but for better or for worse, Tatarsky’s fish-out-of-water performance was memorable.

Three works were commissioned by the Pillow specifically for this 90th season celebration. “Ar | Dha (‘Half’)”, choreographed by Mythili Prakash, is utterly compelling, visually and audially sumptuous, with a now-stark, now-warm lighting design, also by Faba, and a gorgeously layered score by Aditya Prakash and ganavya doraiswamy. Using the traditional storytelling framework of Bharatanatyam dance, music, and gesture, the precise yet liquid Prakash and her equally-excellent musicians doraiswamy, Sushma Somasekharan, Rajna Swaminathan, and Kasi Aysola tip the genre, playfully, slyly, here and there, so that their tale ends in a deliciously upended way. “Gershwin Sweet!”, choreographed by Joshua Bergasse, is a charming, reminiscent shout-out to Broadway and Hollywood dance of yesteryear. Set to breezy George Gershwin tunes performed onstage by pianist Jonathan Howard Katz, Gilbert Bolden III, Gonzalo Garcia, and Sara Mearns (all currently or formerly with New York City Ballet) have a goofy good time twining grapevines or knocking off faux-show-offy pirouettes.

The third commission, “Unsung Sheroes of the 20th Century,” directed by Dormeshia, one of today’s very-celebrated tap “sheroes,” closes out the program as it should. The swinging, killing-it-hot-but-cool trio of Idris Frederick (piano), Matthew Jamal (bass) and Jacques Smith II (drums), accompany Dormeshia and her band of dancers: Brinae Ali (who also sings in the piece), Star Dixon, Marie N’diaye, and Quynn Johnson. The program’s other theme — homage to the past — comes full circle as the names and old footage of a quartet of female performers from the past are projected onto the back of the stage, and then brought to life by these very present women embodying and glorifying their forebears’ talents. Let’s say those names: Cora LaRedd; Mable Lee; Harriet Browne; and Juanita Pitts, American Sheroes all.

A version of this review originally appeared in The Boston Globe. Janine Parker can be reached at parkerzab@gmail.com.